In this blog series, I describe how I handle the challenges of system landscapes with multiple environments. 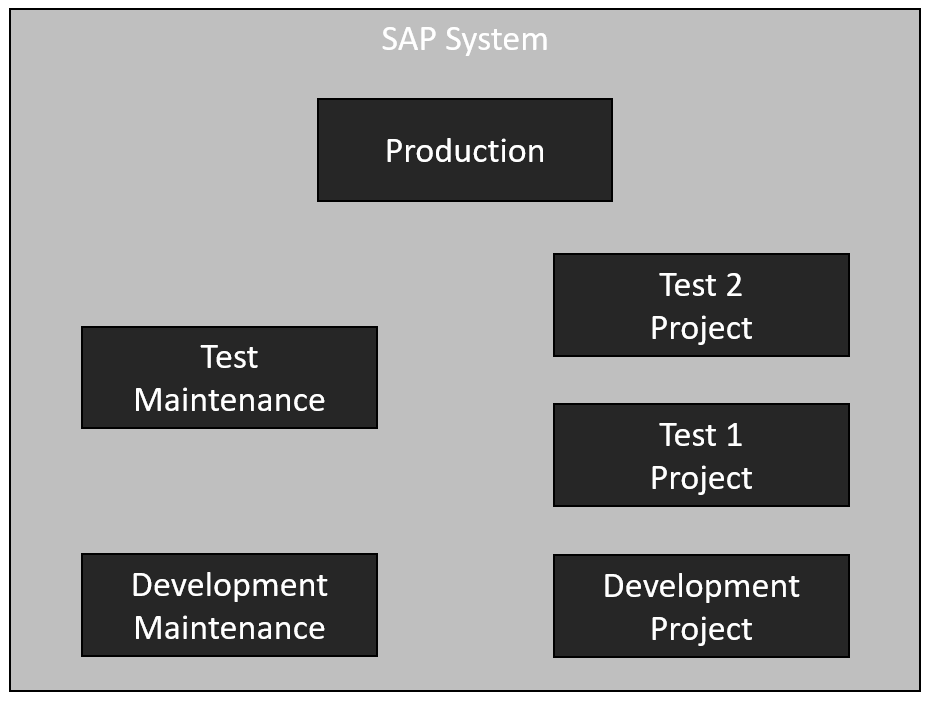 The landscape consists of two development systems. One is used for maintenance activities while the other one is used for the development of bigger projects. For SAP systems the retrofit functionality of Solution Manager (see Dual Landscape Synchronization (Retrofit) – SAP Help Portal) is used to synchronize developments between project and maintenance landscape. In the project landscape, two test environments are in place.

SAP CPI landscape has a traditional structure with three environments (see below). So, I faced the challenge to connect five backend systems with two SAP CPI Tenants (production environment should be clear how it is connected). 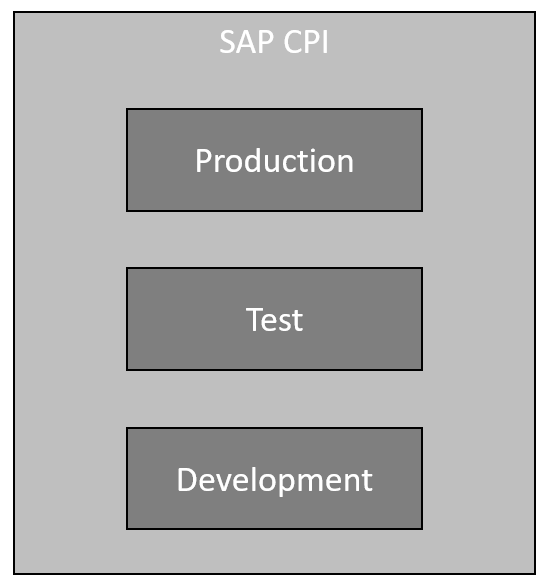 As already mentioned in the first part of this blog series, I tried a few approaches to handle the transports without the support of Figaf Tool. However, I found that this is not the best approach for my requirements and had the following findings:

As a reminder, the approach of a virtual tenant means, that you connect one tenant to multiple backend systems. In order to achieve this, you copy your design objects, so that you have every object twice on one tenant (you need to find a logic for naming as the name of an object must be unique on a tenant). See Part 1 of this blog series for details.

Requirements for the landscape

Together with Daniel and colleagues, I made some brainstorming sessions to find the best solution for my case. Basically, I had the following requirements:

In addition, we came to the following assumptions:

Finally, we found the following setup of the landscape as our best fit.

Please be aware that all design decisions have been done with older releases of Figaf and SAP CPI. With newer releases, other designs could be more valuable (I come to this in part 3 of this blog series)

Concept of the landscape

We decided to implement two transport landscapes in Figaf: 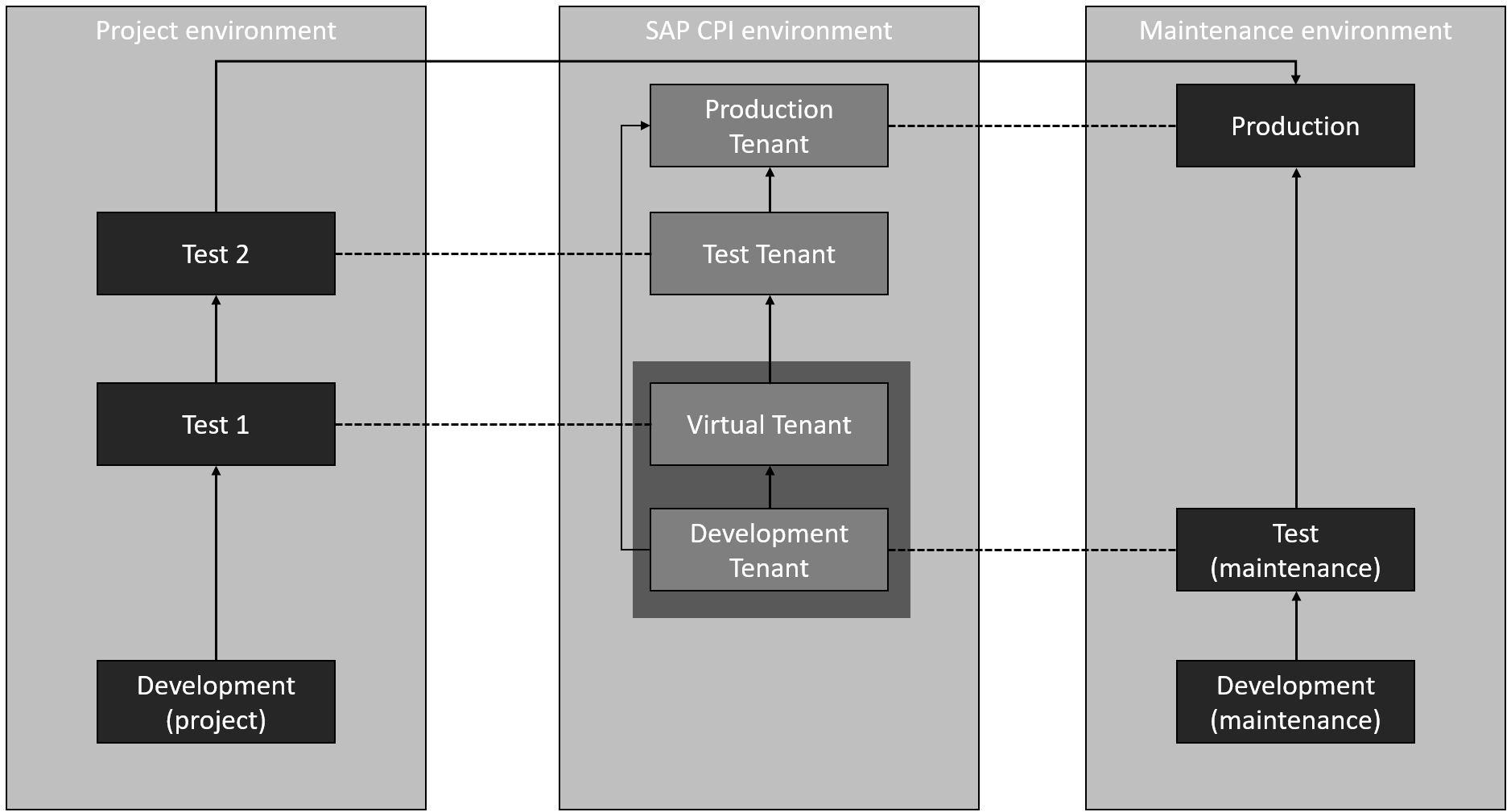 The reason is the separation between maintenance and project landscape (see requirement 5 above). For a development object that has been changed for a project and could be in Test 1 or Test 2 now, I wanted to have the possibility to do a maintenance change in the meantime without influencing the test in the project environment.

In addition, I described a process how to use the landscapes for my developers to ensure they pick the right transport landscape and handle changes properly:

…when I implement a new interface?

Develop it in the correct package in the development tenant. Afterward use CPI Standard Transport to transport the interface into a virtual tenant, test tenant, and production tenant.

….when do I need to change an existing interface for a project?

…when I need to perform a bugfix or need to change an existing interface for maintenance purpose?

Check if the interface version in the development tenant is the same as in the production tenant. This can be performed via the Figaf Tool.

Versions are the same in both systems

Good, there is no ongoing change for the interface in a project. Make your adjustment in the existing interface in the development tenant and transport it via CPI Standard Transport into the virtual tenant, test tenant, and production tenant.

A version in development tenant is higher than in production tenant

Make sure you have enough time to finish the maintenance change before project go live. If you have doubts, contact your colleague who is working on the project.

You have enough time left. Good, now the magic begins:

The implementation of this design in Figaf is simple.

In the first step, you need to create three agents for your three CPI tenants. In the simplest configuration, you just need the URL of your tenant and an S-User account (with password) on the tenant. Of course, there are a lot more settings, that can be configured if wanted (e.g., GIT Integration, Polling and synchronization job settings, …)

In the second step, you need to configure the transport landscape. We have defined them as followed:

Now you are ready to transport development objects.

In Figaf you cannot create a transport directly, but only via ticket. I decided to use one ticket per development object, instead of one ticket per change.

There a several Pros and Cons for both approaches but let me try to show why I think it is best to have one ticket per object. The main benefit to have one ticket per change is that you can move several objects in a single transport. However, if you need to re-transport only part of the objects for this change again, then this is not easy to handle (especially with a high number of objects in the transport). In addition, you cannot really see that an object is already in a transport for another ticket and you get only a message during import when it comes to a version mismatch.

When you use one ticket per object, then you can use this object perfectly to see the complete transport history of this object. Additionally, you can always see in the ticket status if the object is already in transport. In case you trigger a new transport, the old one gets inactive and cannot be used anymore. The downside of this approach is, that you have several tickets and transports for one logical change (e.g., for a bigger project release I had around 60 transports).

Use of transport configuration

Example for configuration of replacement strategy

In this part of the blog series, I gave you more insights into the handling of transports with Figaf DevOps. I described our requirements and how we came to the design of the transport landscape and finally showed you the implementation in Figaf itself. In the final part of this blog series, I will give you insights into lessons learned and possible improvements from my perspective.

Thank you Mark for sharing.

It has been nice working with you to create a process to simplify your Transport processes. I do think you have found a good solution for project vs support landscape that would make it easier for other companies with the same challenge.