PLEASE NOTE THIS BLOG HAS BEEN EDITED AFTER RELEASE TO ADD INFORMATION FOUND AFTER ITS RELEASE. I WILL HIGHLIGHT THE CHANGES IN BOLD.

SAP Digital Manufacturing Cloud now supports process industry scenarios as well as discrete industry scenarios, in the 2111 release it is planned (Subject To Change) to release a weigh and dispense capability, so what does that mean when it comes to machine integration? Well lots more people will want to integrate weigh scales. 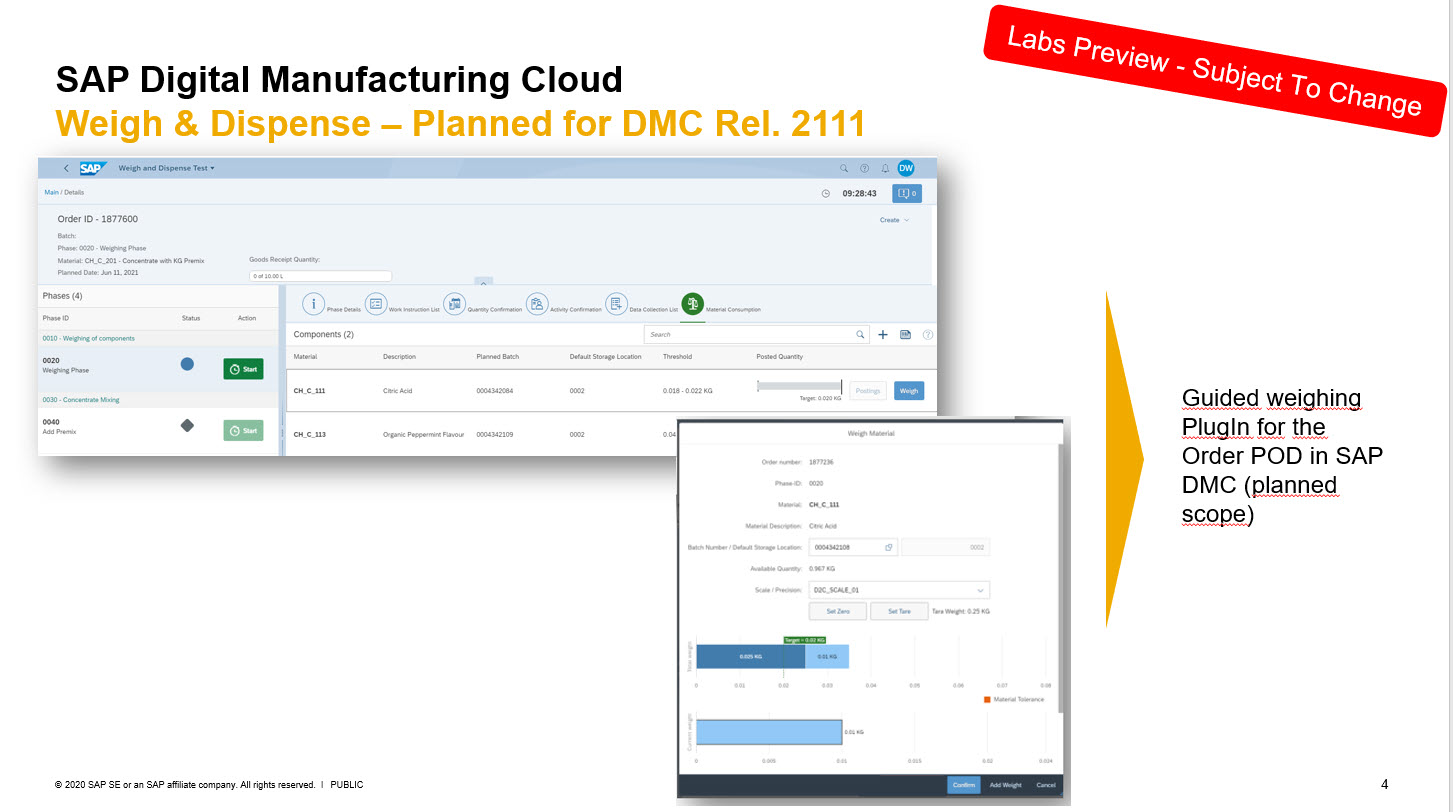 One of the more common integration questions I receive is how to integrate weigh scales into the SAP environment and since the most common brand I typically see is Mettler Toledo I thought it would be good to look at a few integration options before the floodgates get opened.

In this series of blogs I will discuss the hardware options, the software options and how to configure DMC. This blog will concentrate on the hardware so lets get started.

Virtually all of the weigh scales I have come across have either an RS232 port or both an RS232 port and an ethernet port. (Most only have RS232) but obviously there are exceptions.

Some of you might have not seen an RS232 port before since USB was introduced in 1995 but its still quite common to find them on weigh scales. Typically they are a 9 pin DSub connector but you sometimes find a 25 pin version as well.

This is the RS232 port of my Mettler Toledo scales.

All of the Mettler Toledo scales use a communication protocol called MT-SICS (Mettler Toledo Standard Interface Command Set) which is detailed here. These commands are split into 4 levels (0,1,2 and 3), according to the documentation all scales support level 0 and 1 commands whilst newer and more advanced scales also support levels 2 and 3. Some of the more expensive and capable scales also support a communication command set called Shared Data Server (SDS) but for this blog I will only cover MT-SICS as its the most wide spread.

So the first challenge is how do I get the data from the scales into the corporate network so that it can be passed to DMC, so far I can see 3 hardware options.

Lets discuss each of the options:

This IIOT Edge device was recently released by Mettler Toledo allows you to connect up to 4 weigh scales to the box which then plugs into your network and exposes the data and commands via an OPC UA server (if you haven’t heard of OPC UA then check here ). Note that if all 4 scales are RS232 then 3 must be plugged into the USB ports using serial to USB adapters. This box is actually a rebranded fanless PC running embedded Windows 10 with custom software.

+ Simple to implement and support

– Cost – I really struggled to come up with a negative about this approach based on the documentation but out of the 3 options it will be the most expensive. However in my personal opinion the cost would be worth it.

A serial device server is a small piece of hardware that allows you to connect a RS232 / 422 / 485 device and connect it to your network. Depending on the model it will convert the data into either a TCP Socket message or MQTT depending on the model. They are sold by lots of manufacturers such as Moxa and BrainBoxes , you can also find lots of cheaper alternatives on ebay etc

Images of these devices can be found in the provided links.

+ Small and easy to fit

– Typically they convert the serial messages into unsolicited TCP socket messages which are supported by PCo but not by DMC.

– Sockets are not secure and are easy to spoof

Weigh scales often have a computer located close to them so this option is to connect a RS232 to USB adapter between the scales and the computer (PC / MAC / Raspberry PI) and use software to convert the MT-SICS commands into something that DMC will understand.

– Requires a PC / MAC / Raspberry Pi to be located close by.

– Requires custom software on the computer

Of the 3 options I have presented, my personally preference based on scalability, reliability, security and supportability would have been the official Mettler Toledo hardware but since it follows the OPC Weighing Companion Specification which exposes the weight values as attributes to a tag it is not supported by DMC. This leaves one choice which is the RS232 to USB convertor.

In the next part I will discuss how I built the custom application and test it.

If you are reading this statement then thank you for taking to time to read all the the way to the end.

Part 2 will be released soon ……