In this blog we will describe how the Integration check functions, which data sources are considered, how impact types are defined, and what they mean from a practical perspective.

As we pointed out in the first blog of the series, the new Integration check now performs the following:

Let’s explore each of these capabilities in detail.

One of the surprises of the previous implementation of interface analysis within SAP Readiness Check was an unexpectedly high number of IDoc interfaces, reaching one million and beyond. This was the case because every IDoc-partner combination was counted separately.

Web services are primarily defined by the corresponding ABAP proxy, service definition, and direction. The combination of these three fields defines the number of Web service interfaces.

The number of RFC interfaces is calculated as the number of combinations of these three fields.

The SAP BW extractor name (OLTPSOURCE) is the key for counting the number of BW extractors configured in a system.

You will find the list of technical interfaces on the detailed page, under a tab that corresponds to an interface type, by choosing the Interfaces view above the table. 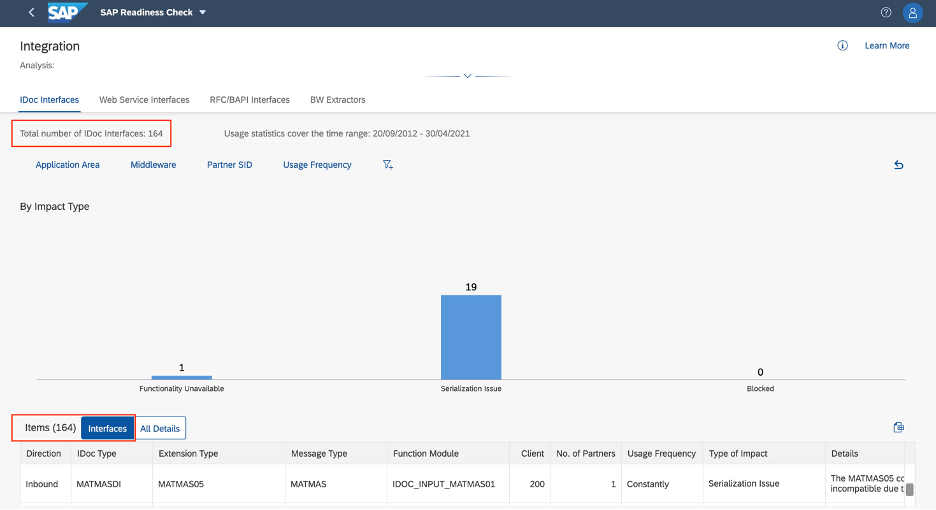 The All Details view provides you with access to all collected data and details at partner level.

First, it generates a list of ABAP and DDIC objects associated with every “technical” interface. This includes BW extractors, IDoc types, tables, function modules, function groups, packages, and application components. It does not, however, consider extensions, such as user exits or extension points, invoked during interface processing.

Then, it cross-checks these objects with the following data sources:

The result of these cross-checks leads to different findings grouped into several impact types.

One of the standard ABAP or DDIC objects that are directly associated with an interface or referenced by an associated custom ABAP object is on the simplification list. The identified objects can be categorized as follows:

The latter becomes available once you upload the ABAP test cockpit results to your SAP Readiness Check analysis.

Interfaces with this impact category will either dump with a syntax error due to an access request to a missing object or become instable as the referenced standard object is neither supported nor maintained in SAP S/4HANA.

Furthermore, impacted BW extractors are assigned to one of the following subcategories:

One of the standard programs or function modules associated with an interface is on the internal blocklist and can’t be used with SAP S/4HANA. Interfaces with this impact category will dump on first use due to an access to a blocked object.

One of the objects associated with an interface becomes binary incompatible upon system conversion or upgrade due to a field length extension. These interfaces should not be used without adjustments on the caller or receiver side to avoid possible data inconsistencies.

There are three types of cases:

The last two become available once you upload the ABAP test cockpit results to your SAP Readiness Check analysis.

Previous blogs in this blog series:

Next blogs in this blog series: