Create a simple Daemon in ABAP

What is a Daemon in ABAP Language?

A daemon is a utility program that runs continuously by itself and without the control of an interactive user on a multi-tasking operating system in the background to monitor and take care of certain subsystems or show immediate reaction to events. Daemons perform explicit actions at predefined times or in response to certain events.

ABAP daemons abilities which provided by the ABAP Daemon Framework (ADF), are more alike to its counterparts in linux or windows. They are being used to handle events in a reliable way by running in sessions with unlimited lifetime. ABAP programs can communicate with the daemons by sending messages to them using ABAP Messaging Channels and message type Push Channel Protocol (PCP) which is a communications format like a simple HTTP message.

Daemons are robust against errors, i.e., a daemon session is not terminated after running into an error (E/A/X messages). However, An ABAP daemon is created again automatically every time a runtime error or a message of type E, A, or X causes a program termination. When its AS instance is shut down, a daemon can be moved to another AS instance by creating a new daemon containing the same context information as the preceding daemon. This enables the new daemon to do the same job.

SAP Netweaver 7.52 present ABAP Daemon Framework or ADF in a short form as a new feature. The ADF is an API that allows you to create and manage daemons in ABAP. An ABAP daemon is an instance of an ABAP daemon class that lives in a special ABAP daemon session of the application server. ABAP programs themselves use the ABAP daemon manager to access ABAP daemons.

As said, the processing of an ABAP daemon takes place in the background and controlled using events. A user of a daemon or the ABAP runtime framework can raise ABAP daemon events to which the daemon reacts using predefined interface methods. A daemon must always be ready to react to inbound events and this is ensured by running ABAP daemon processing in a non-blocking mode to prevent the runtime error DAEMON_ILLEGAL_STATEMENT in ABAP daemon processing and a subsequent restart of the daemon.

Details expansion on ADF implementation and ABAP daemon classes can be found in ABAP keyword documentation and in this blog post series.  Here I would like to concentrate more on procedure of how to create a daemon by implementing a daemon class.

Let us now create ABAP daemons and interact with them using PCP messages. As said, ABAP daemons are instances of an ABAP daemon class that extend the base class CL_ABAP_DAEMON_EXT_BASE. So, first we need to define the class following this tutorial.

As a first step, create an ABAP class ZCL_ABAP_SIMPLE_DAEMON and set CL_ABAP_DAEMON_EXT_BASE as a super class. From this super class, our daemon will inherit different methods from the IF_ABAP_DAEMON_EXTENSION interface that will allow us to respond to different events. Now you see a list of the 9 inherited methods which must be redefined.

Figure : List of inherited methods of IF_ABAP_DAEMON_EXTENSION interface which must be redefined.

Before a new instance of the ABAP daemon class can be created, its ON_ACCEPT method is called to determine if the daemon should start. It accepts all start requests from your own class and rejects all requests from any other program. This is achieved by checking the calling program that initiated the start.

In this simple scenario, you will pass a parameter timeout via PCP. The daemon will then set up a timer to display a popup message each time the timeout was reached. A counter will be used to stop the timer after five messages.

At first, you need to create some private member variables to store the necessary data. Add these lines to the PRIVATE SECTION of your class:

You also need to add IF_ABAP_TIMER_HANDLER as an interface of the daemon class. In the ON_START method you can now retrieve the timeout value from PCP and initiate the timer afterwards. To do so, copy the following implementation:

While your ABAP daemon is running in the background, the ON_TIMEOUT method will be triggered when the timeout elapses. Therefore, you need to implement a handler interface, if_abap_timer_handler, to the PUBLIC SECTION of your class. By implementing the following ON_TIMEOUT method into your class, a popup message using function module TH_POPUP will be displayed, and the timer will be restarted five times:

You can also send PCP messages to your daemon while it is continuously running in the background.

You must consider the fact that only the program which runs the daemon can then use this daemon via the manager daemon. The idea is to have the daemon created via the daemon class itself. Therefore, you need to add 3 other methods to the class: START, SEND and STOP to manage the daemon.

This simple ABAP daemon will be started by a static method. Thus, you need to create a new method START in your daemon class with two import parameters:

To do so, paste the following code into the PUBLIC SECTION of the class definition:

Step 7: Implement the static method SEND and run the daemon

Implement a static method SEND which will be used to send text to the daemon and therefore trigger its ON_MESSAGE method. The method will need the following importing parameters:

Paste the code below into the PUBLIC SECTION of the class definition.

To send PCP messages to your daemon, you need to retrieve a list of all running ABAP daemon instances of your class ZCL_ABAP_SIMPLE_DAEMON. Afterwards, you can compare the name of each instance to IV_DAEMON_NAME and send the PCP message accordingly.

You can now launch your daemon by simply calling the static START method created previously. Therefore, create a new ABAP Program Z_ABAP_SIMPLE_DAEMON_START with only one line of code:

You should see a popup notification every 10 seconds: 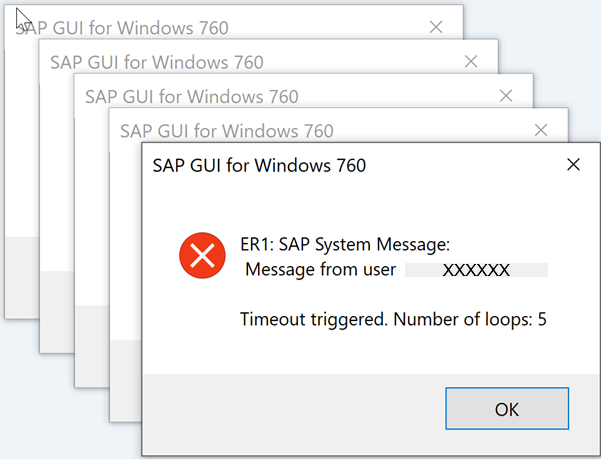 You can monitor all running ABAP daemons using transaction SMDAEMON in SAPGUI. There you can see their state, check for errors even restart, and terminate them.

To stop your daemon, select it from the list and go to ABAP Daemon > Terminate Daemon.

Alternatively, you can also create a static STOP method. Therefore, add this to the PUBLIC SECTION of your class definition:

This method wraps the method STOP of the class CL_ABAP_DAEMON_CLIENT_MANAGER and is used to stop the ABAP Daemon. Now you can stop your daemon by executing

from any ABAP Program. More examples can also be found in the documentation.

As nicely explained in this blog post, daemons main use cases are handling events or managing simple background activities as well as frequent periodic tasks like tracing, logging, clean-up of resources etc. , without harming your LUW (Logical Unit of Work).

I hope this step-by-step instruction could help you to get some feeling regarding daemons and how to create one. You could also extend this example by redefining other methods for case of system restart or server shot down. For example, when the server is shut down, the ON_SERVER_SHUTDOWN method implemented by the developer will be triggered. As the current AS Instance is shut down, this method calls the helper method RELOCATE to move the daemon to a different AS Instance.

The relocate method must select an AS Instances randomly from a list in the current AS ABAP. This application server is then used as a destination for starting a daemon of the current ABAP Daemon class.

Can we have another blog explaining the difference between BGRFC and ABAP Daemon.

Thanks for your interest.

If we want to shortly explain the difference one could say that Background Remote Function Call (bgRFC) allows applications to record data that is received later by a called application. It is usually in the context of a shell (like bash) or in a simple word, another process is its parent, which implements job control. The bgRFC organizes the different calls using queues. The queue can be monitored through the Queue Monitor option in admin workplace. When a process is put into the background, it's still part of the session created by the shell and will still have an association with the shell's controlling terminal.

A daemon on the other hand is a background, non-interactive program and does not have a parent, i.e., the parent process is the system initial thread, and it has no controlling terminal.

Thanks for the nice blog, Safa. This looks interesting.

Thank you for sharing this example, Safa!

There is an older blog about ABAP daemons that has some more information: https://blogs.sap.com/2018/10/18/abap-daemons-always-available-abap-sessions-to-handle-events/