The SAP S/4HANA Cloud Test Automation Tool is a cloud native application, with a no-code approach towards automation. The tool helps in accelerating business process testing and regression tests. The in-built recording functionality allows the user to create or adapt scripts based on the customer requirements. End users could record new test scripts or edit already delivered Standard Business Process Automates and build up their regression test suite. The tool until recently only supported standard UI Automation as a way of creating automates, but with the 2105 release we have bundled along with the tool the ability to create API automates as well.

The need for an API Framework

Test automation tool supports the automated test processes built on UI steps where each step has multiple actions which are based on UI flow in a particular FIORI application. The automates might be impacted by changes in underlying application as part of the regular software upgrades which we provide. Executing test cases using the API framework will always be faster than the UI approach  Considering these facts, API based execution brings out the following advantages:

The newly introduced API automation framework is extremely user friendly and coupled within the test automation tool. We can also add automation scenarios which could contain the chaining of both UI and API process steps. The API Framework is based on whitelisted APIs that are available on API Hub and it supports both ODATA APIs and SOAP APIs (synchronous) and allows an end user to create an automated test case or process using a particular API. Based on the API selected, one can perform different operations (Create/Read/Update/Delete) on multiple entities present for that API.

For creation of an API automate, an end user will be provided with a guided step-by-step wizard wherein one has to select API Type (ODATA/SOAP) and a particular API from the provided value help.

The Test Automation Tool is designed to support both Business users and more experienced technical users as well. The guided wizard simplifies the process of creating an API test process with ease. Once the desired API is selected, one needs to select Entity types, methods, Operation Types, Entity Operations based on the API type selected.

In case where API requires an input payload, a payload structure will be provided to the end user for populating the payload values so that the test case can be generated.

Payload Structure can be viewed in two ways (as shown in below screenshots): 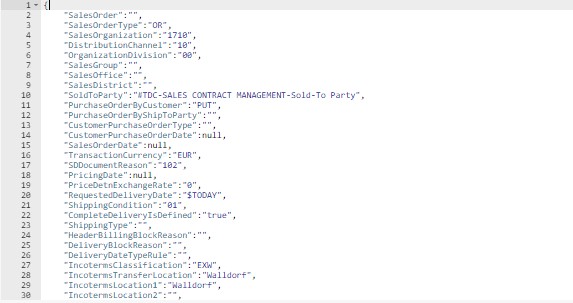 As a user, you will have the provision to assert and export data from the API response also. Once an API automate is generated, the same can be consumed in Test Your Processes application for execution.

For API execution to take place, a communication role needs to be setup as per communication scenario/arrangement maintained for a particular API.

Once executed, one will be able to view API logs having below information:

For populating the values in an API automate payload, user will have the provision to select any value from the provided value help for each input field in payload.

Using value help, one can select any of the following options (as shown in below screenshot):

For TDC binding in payload, user needs to make sure that TDCs are added for a particular test process or test plan. Then using the value help, any TDC and the corresponding parameters can be selected for binding payload property.

In case user wants to bind TDC data with complete payload structure, ‘Bind TDC Field’ feature can be used using which mapping (Auto-bind and Manual) can be done for API payload and TDC data.

An API automate can be used/executed as per below use cases:

Process steps from an API automate can be imported to any other automate. Please note that it might require necessary changes (e.g., data binding changes) depending on the step position where it is getting imported.

Substitute for UI based automates

It is also possible for an end user to replace an UI automate with its corresponding API automate. Replacement can be done using provided value help feature for process steps where one can select the new step that will replace the existing step.

very informative read rashmi, i have a question, the tool is a public cloud offering but most of our clients are on private cloud, so is there any way to use this tool and make it work on our client's environment which are private cloud ?

All the tiles in fiori library are on Software Component Version - SAPSCORE 127 - SP 0000, is there a way these tiles can be used on S4CORE 106 - SP 0002 ? i see the odata services don't exist for these tiles on S4CORE software component.