In this blog we will take a look at how to run your ABAP Unit tests in CI pipeline when publishing from AbapGit.

There are some really cool stuff already in this area such as:

The difference between Felipe’s blog and mine is that in this blog I will explain how to run the unit tests without relying on additional source code installed on the Abap server.

Why would you even want to consider this approach. You could just keep running your Unit tests like normal.

While this is certainly true, I don’t think you can test too often, so adding another layer of testing in a pipeline where you could also integrate other packages as well is pretty cool. Or possibly you could use this setup to potentially shift your development to a server off the common transport path (See Graham Robinson‘s blog for inspiration) to later integrate into the test system via a pipeline.

Let me explain my setup for this blog, everything is running in separate Docker containers.

If you want me to write a second blog on how to set up the gitlab stuff, let me know in the comments below. 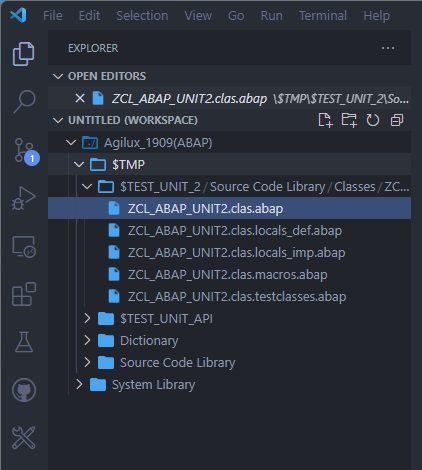 In this class I’ve got a simple method called test2 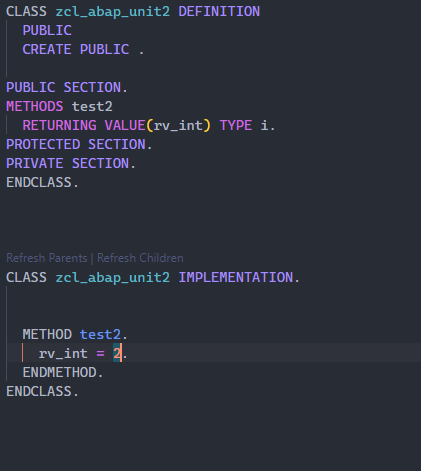 And a local test class 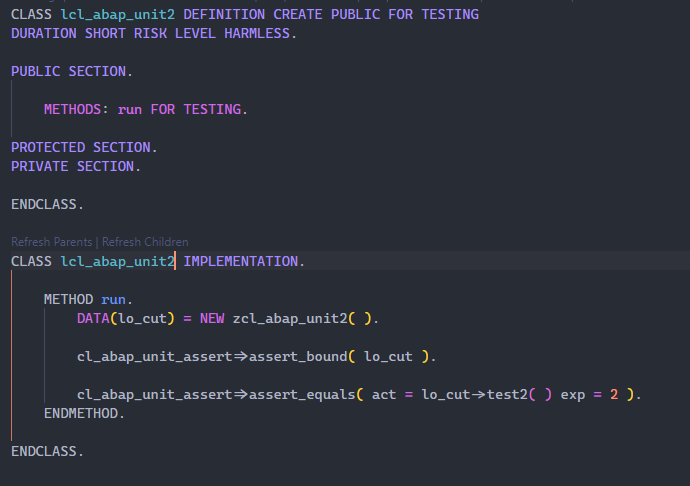 Sidenode: In case you are wondering about about the screenshots, I’m using Marcello Urbani’s VSCode extension

While this obviously isn’t a very elaborate scenario, it does the job for this blog 😉 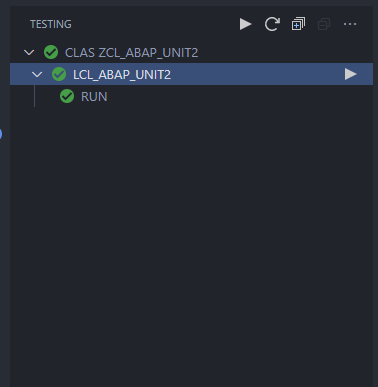 Now let’s add this to a pipeline.

Firstly on my gitlab server I create a new repository. 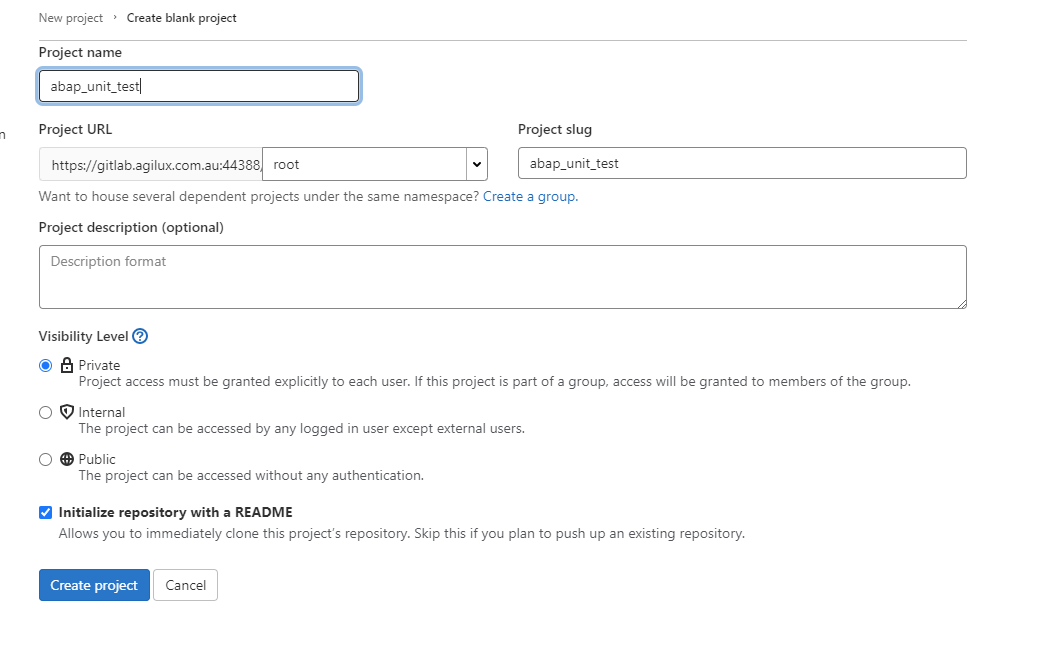 Afterwards we copy the http link to be used in AbapGit 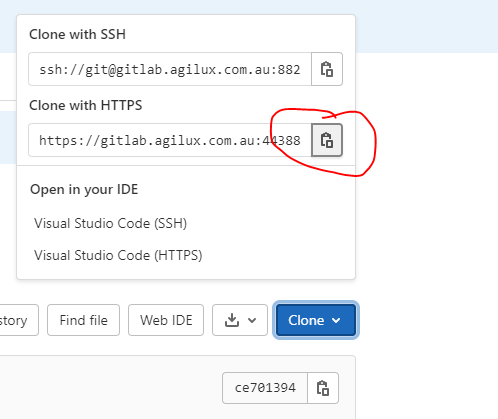 Now that we have pushed out code, it’s time to build the pipeline. Click the new file. 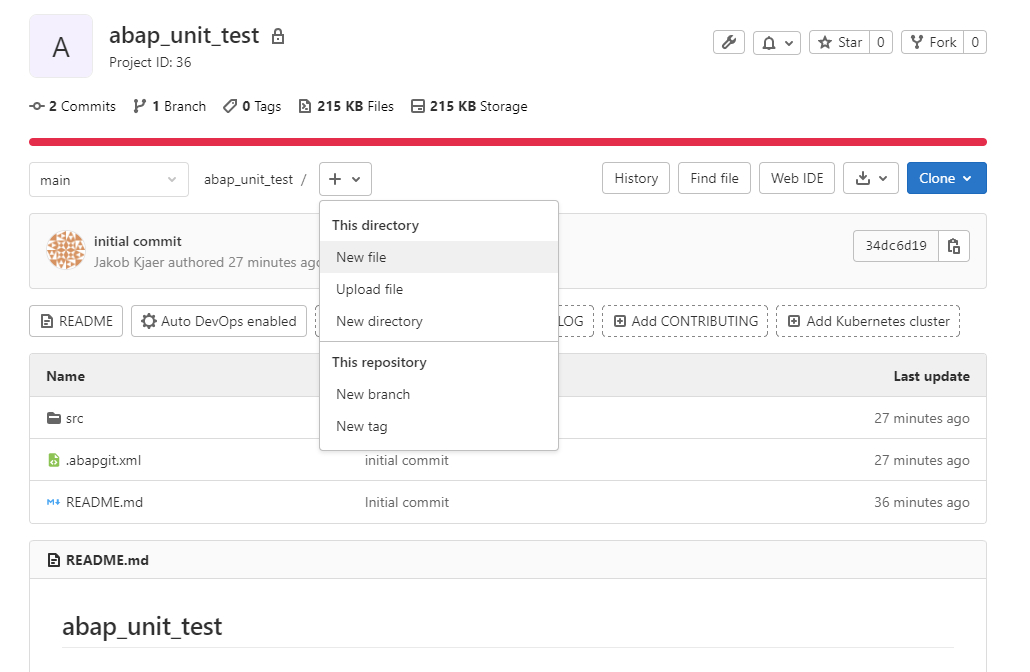 Select the .gitlab-ci.yml template and paste the following in.

In the pipeline we will install an NPM package I have created. This will execute the unit tests and give us the output.

Commit the changes afterwards we need to maintain the variables. You can maintain these variables in different ways. This is the simplest. We need a server, package or class, username and password.

Here I use the package. If you want to use the class, then replace the ABAP_PACKAGE with ABAP_CLASS.

Now let’s save this and try to run our pipeline. 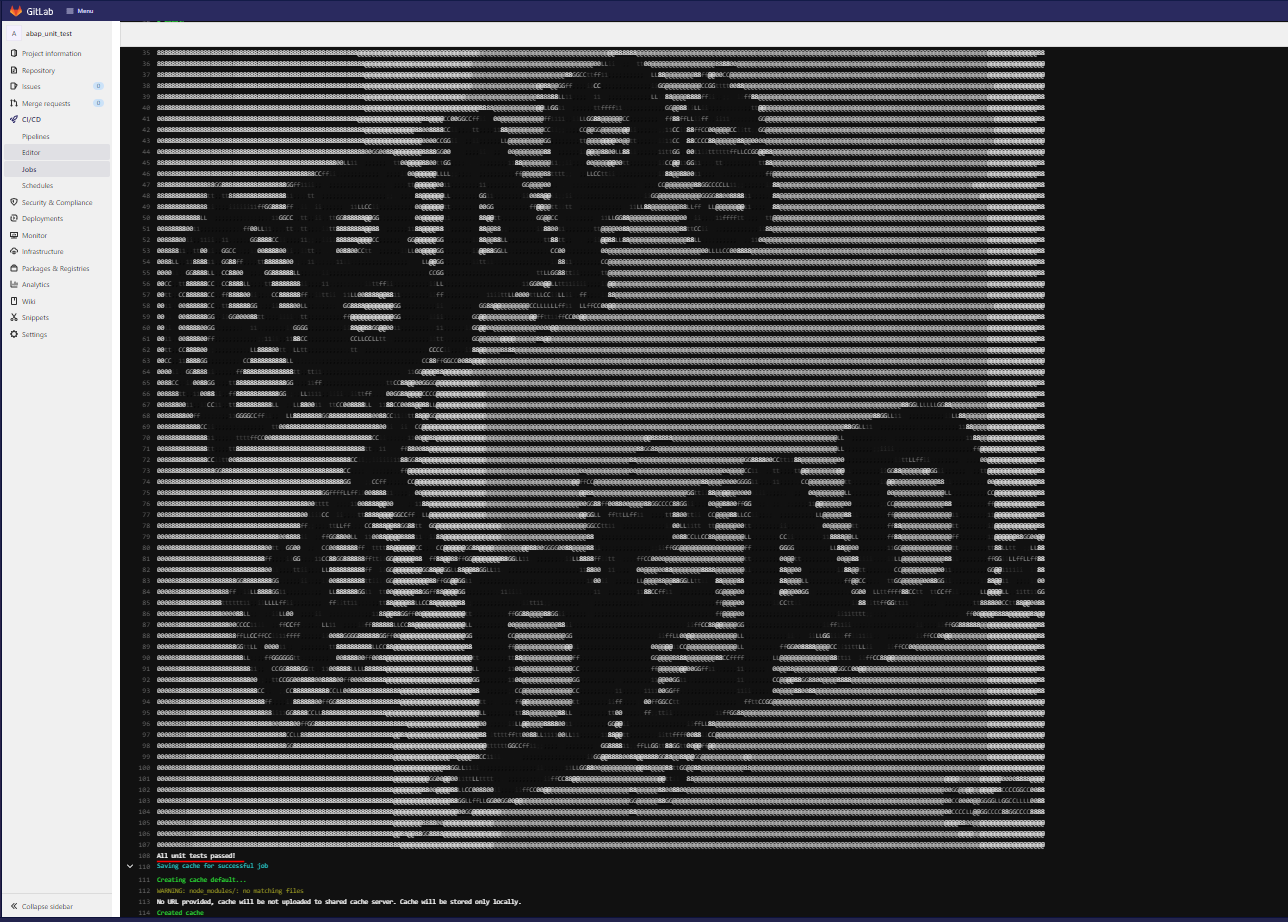 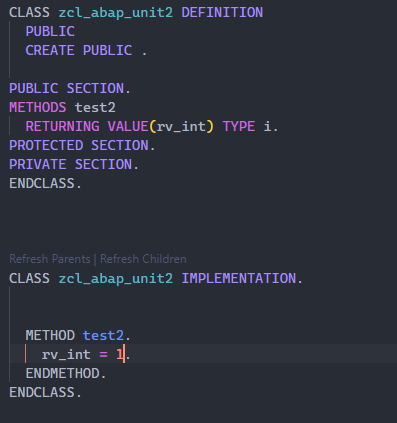 Checking the details of the job we get the expected fail on the unit test. 1 is actually different to 2. Who knew!

Alright,not it’s time to get creative. How about we let the pipeline create a gitlab issue directly on a failed test.

Alright let’s go through this step by step.

abap_unit:
stage: abap_unit <= which stage does the job belong to
script:
– npm install -g abap_test_runner_cli
– echo “$( abaptr –skip_image true )” >> test.txt <= Take the output from the abaptr command and copy into a text file called test.txt
artifacts: <= Tells the pipeline that new files are to be stored in the context of the pipeline, in this example the text file test.txt
paths:
– test.txt

create_issue:
stage: create_issue
script:
– apt-get update <= Update the package manager as we will install python3. I’m to lazy to find a docker image that has both node and python 🦥
– apt-get install python3 -y <= Install python3
– |- <= Execute a multi line command
if [[ $( grep -q ‘Error’ test.txt && echo true || echo false ) == true ]]; then <= The if statement uses a grep query command to check for the word Error in test.txt, if present it evaluates to true, otherwise false
echo “Creating issue”
curl –request POST –header “PRIVATE-TOKEN: $private_token” “https://gitlab.agilux.com.au:44388/api/v4/projects/$CI_PROJECT_ID/issues?title=Unit%20test%20failed&description=$(cat test.txt | python3 -c “import urllib.parse, sys; print(urllib.parse.quote(sys.stdin.read()))”)” <= The curl command creates the issue via the API. We set the title Unit Test Failed and the description from the test.txt file URL encoded using the python3 command. The private_token is a personal access token stored in the CI variables. This isn’t best practice, but for demo purposes and since i’m the only user on this gitlab instance, i’ll let that little security issue pass 🙈
exit 1 <= Tell the pipeline to fail
else
echo “success”
exit 0
fi
dependencies:
– abap_unit <= Tell the job that it needs the artefacts coming from the abap_unit job.
Now when we run our abap_unit job will always execute as success, but the second will validate the output from the abap_unit job and decide whether to create an issue or not.
Checking the new pipeline we can see that the first job passes now as expected, but second fails. 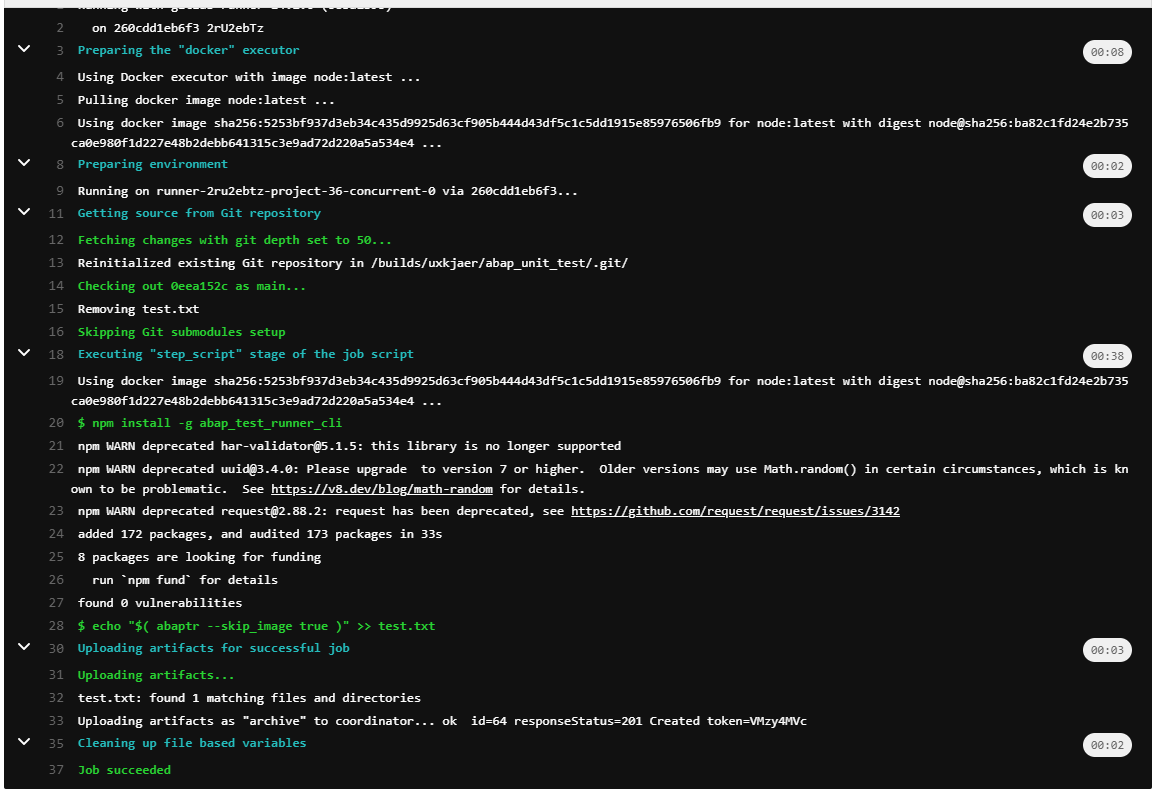 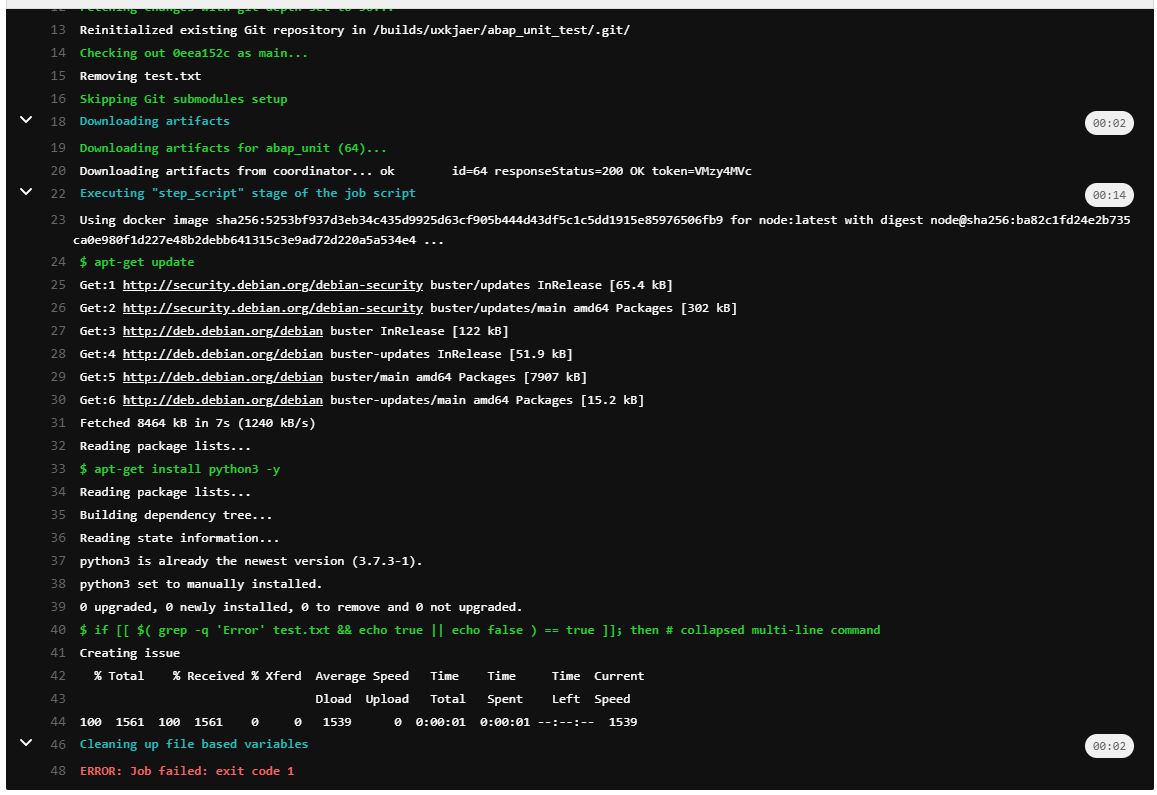 And upon checking our issue log, we now have a newly created issue

Text looks a bit weird as Gitlab expects markdown formatted text, but currently it’s not.
You could take a look at pandoc to handle that.
Also if you want to see the actual test output as well, then add the line
cat test.txt before the exit 1 line.
You could also assign the user to the issue automatically by adding the parameter assignee_id=$GITLAB_USER_ID to the curl command. 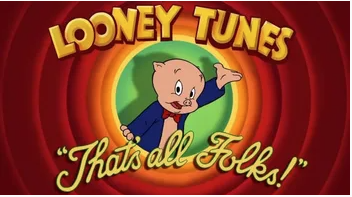 I hope you enjoyed this little nerdy read. Hopefully it’s inspiring you to take a closer look at this if you are already using AbapGit or maybe an inspiration to get started.
Good luck!
Alerting is not available for unauthorized users

Cool, its good to have the code versioned, and regular feedback on unit tests.

I guess the unit tests will be run with the code in the system, which might be different than what is in git? Depending on the timing and what is committed by the developer.

Correct. The demonstration here is the system you are running on. But you could have it deploy the code to another system and execute the tests on another system. If it's the same system the code should always be the same.