As a critical component in integrations, We regularly use terms like SSL and TLS but recently i got a chance to dig deep into the basics and functioning of Secure Socket Layer (SSL) / Transport Layer Security (TLS).

In this blog post, we will be discussing about terminologies such as SSL, TLS, HTTPS, Certificates, Certification Authority etc. along with steps followed for the great SSL-TLS handshake between client and Server systems.

SSL – This is the standard protocol/process for maintaining secure communication between two systems, safeguarding any sensitive data that is being sent between two systems, preventing criminals from reading and modifying any information transferred, This is deprecated now.

TLS – This is a more secure and updated version to SSL. Its purpose is to provide security in communication between two or multiple parties.  Several versions of the protocol are widely used in applications such as email, instant messaging, and voice over IP, but its use as the Security layer in HTTPS remains the most publicly visible. This runs in Application layer in internet and is totally different from TCP (not to be confused with, which is a transport layer protocol). Latest version is TLS 1.3 defined in Aug, 2018.

HTTPS – This in simplest terms is, HTTP + S, which means addition of Security (S) to the ever-existing HTTP (Hyper Text transfer protocol).

Note: We’ll be using SSL for certificates terminology here for convenience as this is most commonly referenced term.

Why is security needed for communication?

How is this security ensured?

Let’s think about point 2 from above first. To resolve secrecy issue, we need to ensure that data transfer between two parties employed in communication is encrypted while in the transit. For this communication process, Public Key encryption is used, and to communicate public key to client system (C-Ac) – SSL certificates are used. Additional benefit of using SSL certificates – only an authentic server will be in possession of a valid certificate. This is wrong, right? – yes it is, S-Ms can also keep same certificate as S-Ac since it is publicly available but that certificate will only be having public key as specified in certificate but not corresponding private key which is the responsibility of S-Ac to preserve, safeguard and ensure no compromise (point 1). This ensures both server authentication (Private key of certificate is available only to S-Ac) and security throughout communication (the great Public key encryption).  So, unless hackers can break public key encryption algorithm used and get corresponding private key, communication is safe.

Contents of an SSL certificate –

Steps in this communication – The great SSL/TLS handshake –

Secret Key (S Key) is to be used for all further communications taking place in the session. 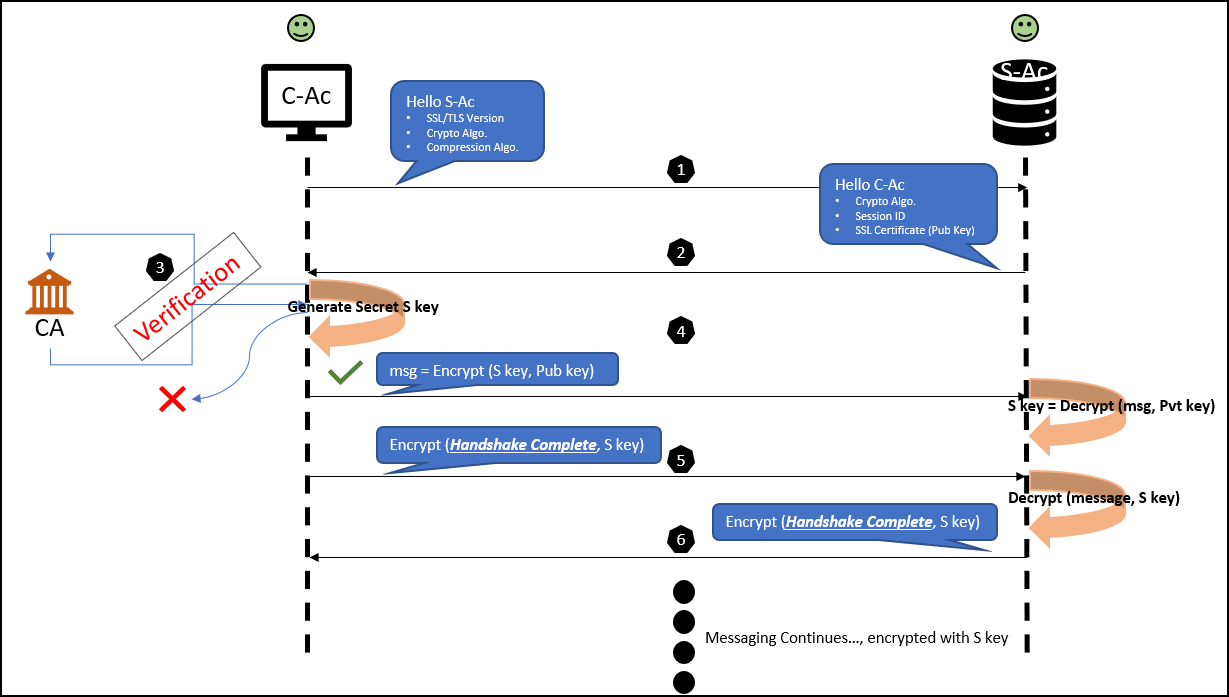 Potential Breach attempts and how SSL prevents them –

I hope you found this post helpful in understanding the basics of SSL/TLS. Feel free to provide your valuable feedback and suggestions to this blog post in comments section. In case you have any questions with respect to SSL/TLS, post a comment.