The Human Touch – The Evolution of Evidence-Based Design 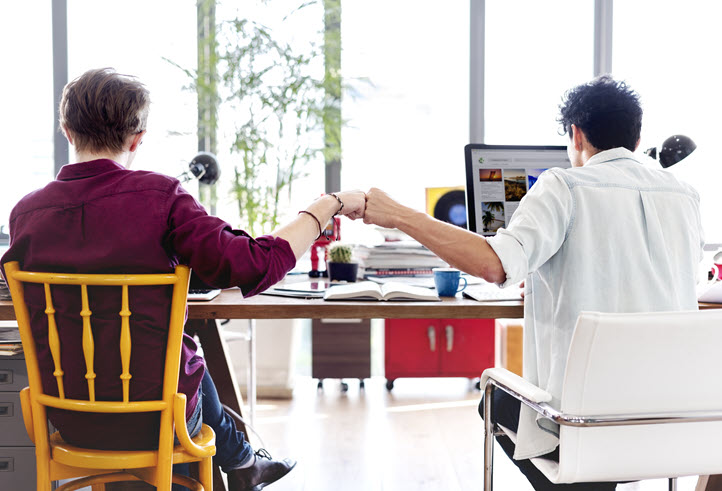 Usability testing is the basis for the success of any product, with the ever-evolving development of user research as a science starting around half a century ago. In this article, we will look at the different concepts and methods that developed with and made use of user research, and especially focus on what they all share, one of our most primal senses: human touch.

If you’ve ever seen Charlie Chaplin’s Modern Times, you can probably recall the scene of Charlie being strapped down in the worker-feeding machine and fed nuts and bolts due to an escalating fault in the machine. Poor Charlie! The movie was a dystopian reaction to the technological developments of the 1930s, where humans were put in the backseat. The message is still relevant 85 years later: Focusing on user needs – the needs of human beings – is key to any successful physical or virtual product.

To foster customer success, end users need the best user experience possible to empower them to work efficiently. Here, evidence-based design with user research is of utter importance, as the video below demonstrates. Incorporating factual usage measuring and deep knowledge about the users’ behaviors, needs, and wishes saves not only valuable time, but also money.

But how did it all begin? Let’s have a brief look at the history of the human touch in design and usability.

Toward a human-centred design

The journey leading up to a human-centred design mindset and approach first started in the middle of the last century. As with most socio-cultural disciplines, many post-war thinking models in the software industry (and other industries, too) were purely scientific. It was only from the 1960s onward that this slowly changed. Increasingly, users’ needs were being integrated into the development phases of software design projects, mainly through usability testing. The labels for these approaches shifted from participatory design in the 1960s to interaction design in the 1980s, but were really referring to the same idea.

This culminated in a paradigm shift in the late 1990s, when design methods started placing not technology but the user at their center. One of these is the human-centred design method, first standardized by the International Organization for Standardization (ISO) in ISO 13407: Human-centred design processes for interactive systems. Its main aim was to achieve a high design quality by providing guidance on incorporating user-centred design activities: from understanding context and requirements to producing and evaluating. Slowly but surely, this method and many similar ones developed into a mindset: The human was to come first. No more crazy machines for Charlie. In 2010 the ISO 13407 was revised, which resulted in the new ISO norm 9241-210. It highlights user-oriented activities, but the basic concept has remained the same:

The process consists of six steps: After the planning of the human-centred activity (step 1), the context of use is described (step 2), and the usage requirements specified (step 3). Design solutions are developed that fulfill these requirements (step 4), which then are evaluated from a user’s perspective (step 5). Steps 2-4 can be repeated until step 6 is reached, that the solution found meets all the requirements.

The history of usability testing

With the increasing demand of involving end users came an increasing amount of publications and methods on how to achieve that. In the 1980s, the still today applied methods and theories were developed. In the 1990s, they were refined, standardized, and professionalized, including:

With the beginning of screensharing tools, remotely moderated user research came into practice. Unmoderated user research on the other hand needs specific tools as it is completed alone by test participants. By the way, SAP created an easy to use card deck with its 14 most commonly practiced user research methods. Since the 2000s, various online research platforms offer remote usability testing and professional services like recruiting and collecting data. Also, expert literature steered the focus on the options of online usability testing, for example in Beyond the Usability Lab by Albert, Tullis, and Tedesco from 2009. And due to Covid-19 restrictions, the demand for remote usability testing has been increasing during the last 1.5 years.

A parallel development took place in the mid-1990s that stemmed from the paradigm shift described above, and from the development of computer equipment. In 1995, Apple Inc. appointed cognitive scientist Donald Norman as their User Experience Architect, which was the first time that the term user experience was used. Due to the pioneering developments of this company and others, by the mid-2000s, this new discipline became one of the most quintessential ones in software companies. The term user experience was adopted and defined along with the term usability. According to the ISO definition 9241-210:2010, user experience includes all the users’ emotions, beliefs, preferences, perceptions, physical and psychological responses, behaviors, and accomplishments that occur before, during, and after use. Usability (ibid.) focuses on “effectiveness, efficiency, and satisfaction in a specified context of use.”

Along with user experience, user research evolved, integrating the thus developed usability methods in a fully-fledged discipline. The development that is still prevalent to this day started out with design methods that placed the user in their center. This led to the evolvement of user research as a discipline of its own, playing an important role in UX design nowadays. As explained in the video above, in today’s world it’s all about implementing what actual end-users really need – Charlie Chaplin would be delighted!

Have you become interested in user research after reading this article? You will find more information at the open SAP offerings at https://open.sap.com/courses/dr1. For more information about training courses, templates, tools, and much more, you can join the User Research @ SAP Jam group.