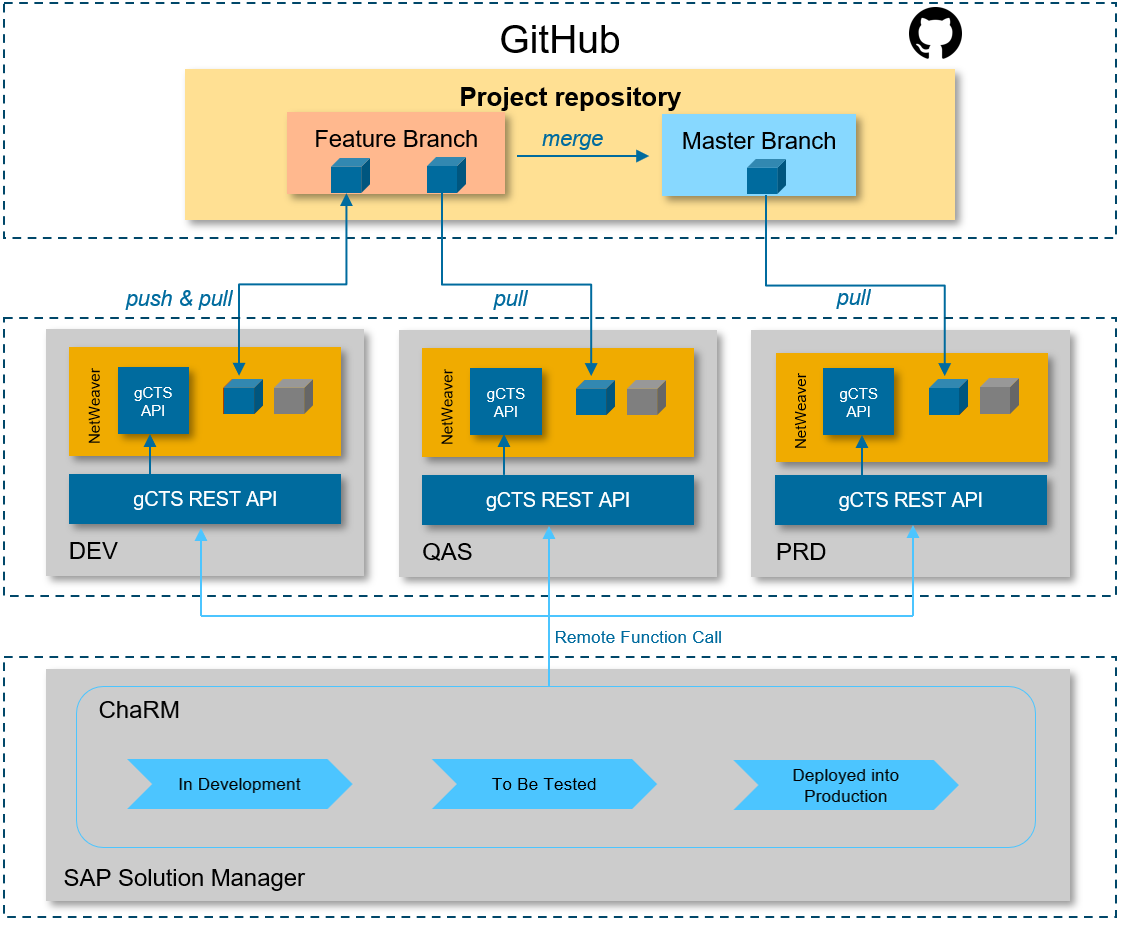 In order to run Git-enabled Change process you have to be prepared. First you have to configure gCTS for ChaRM, so far ChaRM only supports gCTS with GitHub as the Git server. You can get more details about the configuration from the online help Configuring Git-enabled CTS.

Add your managed gCTS system (SAP_BASIS 755 SP00 and higher) to your Solution according to their system roles even they don’t have transport routes connected. E.g., take H18 as the development system, H19 as the testing system and H17 as the production system in the Solution definition, but they are seperated systems without transport routes.

Git-enabled Change supports all kinds of Change Cycles (Continual Cycle, Phase Cycle and Release Cycle), you have to build the transport track for your gCTS landscape manually during the tasklist creation of Change Cycle. Because in fact the gCTS systems are isolated from each other and you have to create the “transport routes” in your mind and connect them by system roles they acted, ChaRM will detected the valid gCTS systems and you only have to assign them to related system roles. Git-enabled Change support gCTS landscape with mutiple target systems and production systems, each target system or production system has an equal position in its role.

Once tasklist created, you will see what a gCTS transport track looks like in the landscape overview. And Git-enabled Change doesn’t support cCTS scenario so far.

After the Git Version Control Data saved, then you can start your development work with creating a new transport request. The gCTS transport request will be created by gCTS API and it has specific attributes assigned, although it looks the same like normal transport request but it will never be exported and imported (since there is not transport route at all).

If the developer finishes the development work then next transport task should be released, during the releasing of the transport task the ABAP code will be pushed to related non-production branch (usually we use feature branch) of the Git repository. 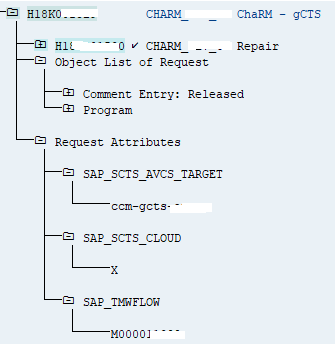 Go to Transport Management assignment block of your Git-enabled Change, there is a column named “Commits” in the table. Each time when developer releases a transport task from gCTS development system, the ABAP code will be pushed to Git repository with a new commit ID.

Go to Landscape assignment block of Git-enabled Change, there is column named “Current Commit” for each system, which means the newest code version comes from the commit of Git repository. The development system and test system now has the same current commit, so the ABAP code change already deployed into test system. This action will also be recorded in the text log. Click on the hyperlink of the commit ID, it will also open the commit details in Git repository.

Till now developer handover the code change to tester and  tester will verify the feature on test system, if everything works as expected then tester will set the Git-enabled Change status to “Successfully Tested“. The original gCTS transport request was released from development system, but it will never been exported because there is no consolidation route between development system and the test system, in gCTS world the releasing of the transport request only means the development work is completed, no new transport tasks and no commits will come.

At this point of time, the testing phase is also finished. The Change Manager is considering making the code change productive, this means the Change Manager will approve the code change to be move into production system. To achieve this, the Change Manager set the Git-enabled Change to status “Authorized for Production“. And what ChaRM will do in the backend is very different from the past, since now ChaRM leverages the gCTS API and Git process, so if ABAP code is going to be productive, the code in Git repository must be productive first. This step will triggers an action in Git side: a Pull Request will be created and the approved, then the code in non-productive branch (feature branch) will be merged into production branch (master/main branch), this is how code change go-live in Git world. The production system is linked to the productive branch of the Git repository, so ChaRM has to make sure the code in Git side go-live first. The text log will record the action, and the Pull Request could be found in the Git. At the very last step it’s time to let the ABAP code go-live in the production system, IT Operator sets the Git-enabled Change status to “Deployed into Production“, then the code change will be pulled from productive branch (master/main branch) of the Git repository and deployed into production system. It is very similar when the code was deployed into test system, the only difference is that the code was pulled from non-productive branch (feature branch).

Go to Transport Management assignment block, click on the icon in “Deploy Status” column, you will get an overview on which commit was deployed by which transport request for each target system and production system. 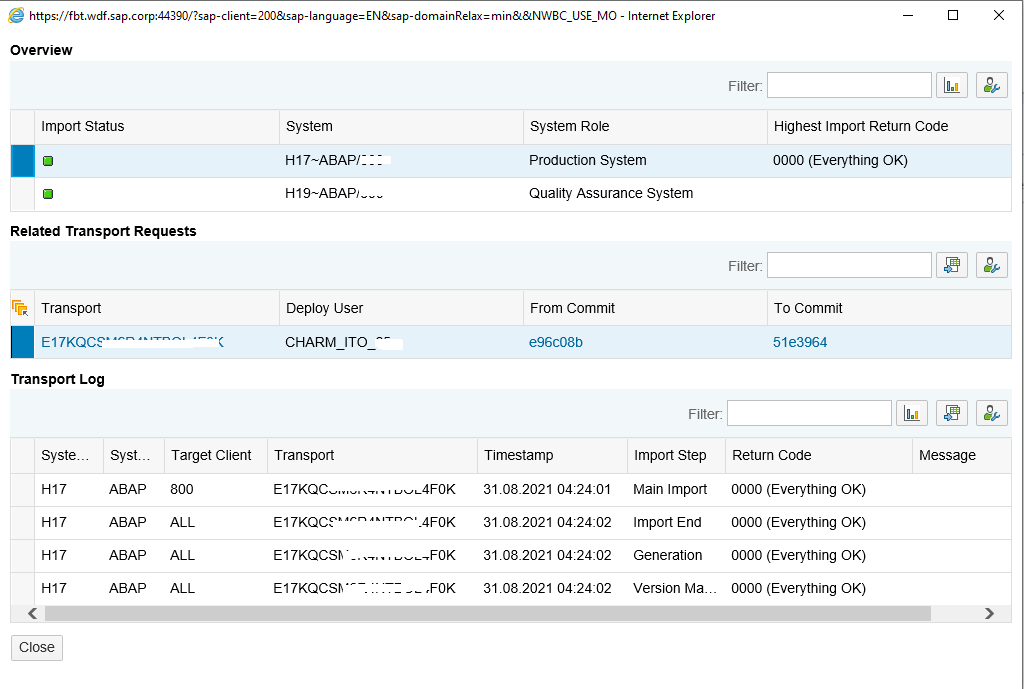 Git-enabled Change (SMGH) is the dedicated transaction type for ChaRM to leverage the new way of ABAP code transport provided by gCTS, and Git-enabled Change present you how ChaRM tried to integrate with CI/CD process.

In a CI setup, "Integrate your changes into the main line frequently and in small bits." (ref), ie. every feature is a small change, resulting in typically many feature branches?

You can have serveral branches for your DEV and QAS system, but you can only have one branch active for you system. Which means you can have a specific branch for one component, but if you want to make change to other component then you have to switch branch then.

You can choose to have onlyh one feature branch and merge the small changes to your main branch frequently, typically you can do the merge whenever you want, you don't have to create a branch for every small feature specially.

We have Solution Manager ChaRM (on-prem) and would like to configure the CI/CD pipeline + GitHub repository for Fiori development in the SCP (Cloud) environment using ChaRM. What is your recommendation ?

As far as I know, the Git-enabled CTS (gCTS) currently doesn't support SCP (should be BTP now) officially, but it will come later I believe.

So far for SCP development, ChaRM provides Cloud TMS process but it has no integration with CI/CD + GitHub. You can refer to How to use the integration of SAP Cloud Platform Transport Management into SAP Solution Manager Change Request Management and Quality Gate Management | SAP Blogs

Do we require these three systems in the gCTS integration with the ChaRM or is it possible to do this configuration with only Two system connected with ChaRM?

So far two system landscape is not supported by ChaRM Git-enabled Change process, the best practice always recommends at least one test system for your landscape.

Thank you Sawyer for your reply,

Can we use virtual system as one of the three systems?

I don't think you can use a virtual system, as ChaRM will check every system if it is gCTS enabled.

What auth and roles are required when we upgrade our solman, to be able to create git enabled change in SM_CRM.

We are not able to see the Default transaction SMGH while creating a change.

Regarding the configuration and authorization for Git-enabled Change, I suggest you raise an incident to SAP support.

And regarding your last question which was about two system landscape for SMGH, I checked again and we support this kind of system landscape, you can have only Dev system and Prd system in your landscape.

Is it required to implement SAP note 2945557 - Git-enabled Change and Transport System (gCTS) Dedicated Remote Function Modules for Change Request Management (ChaRM) in our managed systems when we are integrating gCTS with ChaRM?

Yes, this is mandatory.

Looks like gCTS configuration issue, it has to be checked further.