I have explained about  Referenced Sub flow in my previous blog. Now SAP Workflow Management has introduced some new powerful capabilities enable developers to execute activities in parallel. So far developers could model only static number of parallel branches in a workflow. Use cases requiring dynamic number of parallel activities of the same type is possible now in SAP Workflow.

For eg: Multiple Line items in a Purchasing document require approval based on line items  with different approvers.

A document needs to be reviewed or approved by multiple users in parallel depending on the requestor choice.

An investment approval request sends to multiple approvers of the same level in parallel and each approver needs to make a decision.

All the above use cases require dynamic number of parallel activities and after completion of these activities the workflow needs to continue to execute the next set of activities. The new parallel for each feature enable customers to implement above use cases. The referenced subflow feature enable developers to assign a collection from workflow context and each element in the collection will be used to create a new workflow instance as a child workflow.

The below configuration shows how to model a reference subflow executing multiple workflow instances in parallel during runtime. The property Type needs to set as parallel. A collection based on number of workflow  instances required to be assigned to the Collection Context Path. This collection can be dynamically built in the workflow context using a scrip task or pass through workflow start. Each element in the collection will have an equivalent workflow instance. The completion condition is an optional property explained later in this blog. When you execute workflows in parallel using a Referenced Subflow, the next activity will be started after completion of all the workflow instances started. But there could be conditional exits where the Referenced Subflow need to terminate some of the parallel running workflow instances. for eg: in the above example, one of the cost center owners reject the request, the approval request is no more valid.

If one of the parallel running subflow instance has status reject, the referenced subflow will complete the execution and continue the next steps. 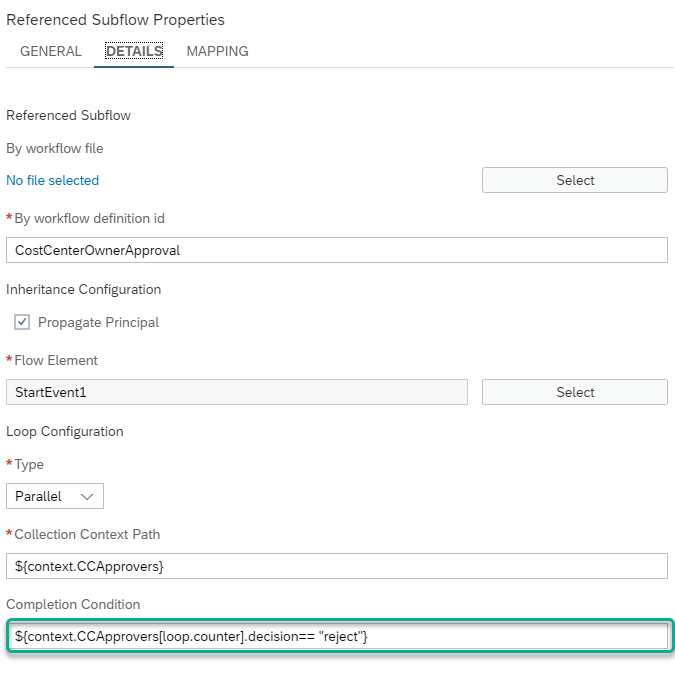 SAP Workflow Management offers out of the box monitoring capabilities to keep track of all workflow instances. It is possible to navigate between the main workflow and referenced workflow instances providing a parent child view. This enables developers or administrators to easily manage the workflow instances belongs to a specific parent workflow. 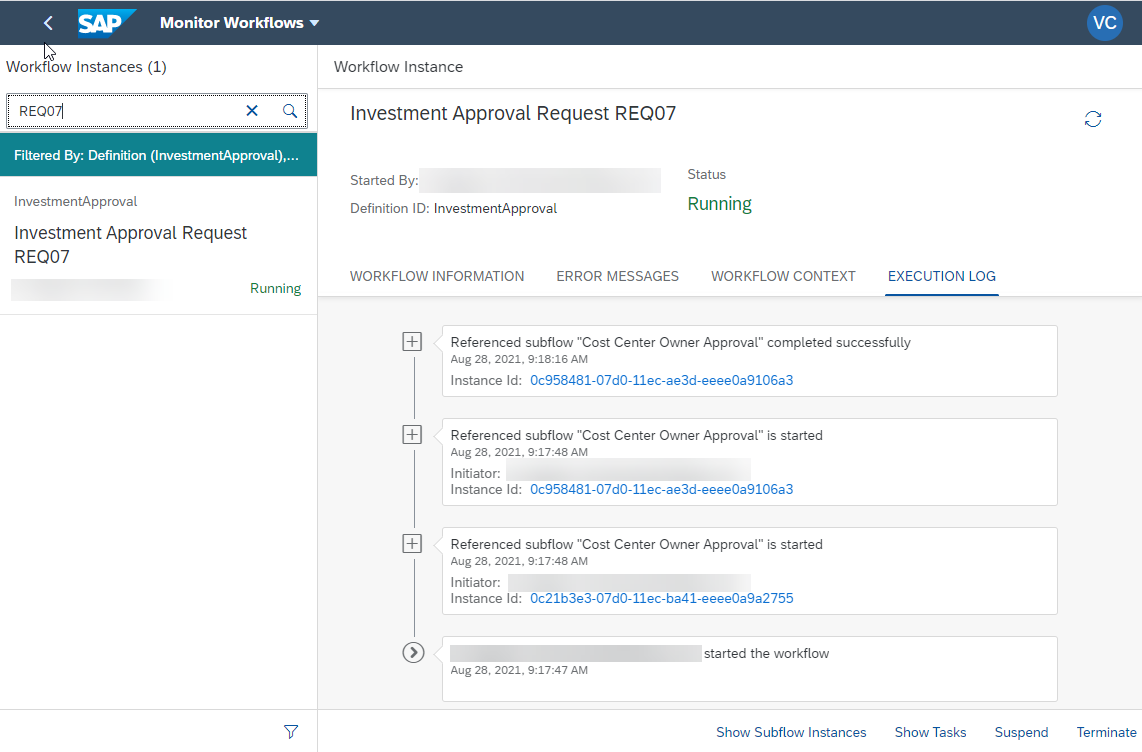 The new par-for-each feature in Workflow Management improve the process performance by executing workflows in parallel without any additional synchronization logic developed and easy to monitor these instances using Monitor workflow applications.

Thanks for this nice blog.

I followed this blog and deployed workflow application to SAP BTP successfully. But there is an error in subflow instance(s) when testing.

"The collection configuration '${context.CCApprovers}' of the loop could not be resolved to a valid collection."

The initial context is as below.

I got the same error. How did you solved this?

Are you sure the collection you are assigning to the Ref Sub process has 15 objects.

Is it possible for you to share the details of the collection you are assigning ?

I have created a workflow and a sub workflow .In my case there are two item at run time( having different approvers for each item ).I follow your document parallel under Loop Configuration and is working fine and sending two task .

But in sub workflow, I could not able to configure approver of each line item . Request you for your kind help .Thanks

My approvers are in json file at the time of instantiating the main workflow .

Thanks for your quick reply .

In input mapping, I tried with multiple permutation & combinations.

i am getting no approver

2. if i am passing below details then both task it is going to same approver .

Request you to please suggest .

context.SupData should be an array. As of now it is not.

please refer this hands on guide.

Nice document . Its resolved my problem .

is it possible to have a "Completion Condition" such as IF 2 Sub-Workflow were approved, cancel the rest and come back?

The idea is that we want to start the sub-Worflow for 10 Approvers, but we need the OK from 2 out of those 10. Whenever we got 2 approvals, we can go ahead