ASYNC/Parallel ABAP in a OO way

After some feedback and some time to work on this I’ve improved the examples and introduced the Thread Pool Executor concept.

Every now and then we find a need for doing some work in parallel. Recently I’ve worked on a process that was taking far too long to be of any use. It was taking large amounts of data in and creating an even larger amount of records given complex rules, validations and enrichment.

Refreshing some ABAP parallelism techniques, my options were basically to split the input data and then running FMs in background, starting a new task or writing a report and scheduling a job with parallelism being ranges of a selection criteria.

All valid options, I suppose, but I got used to work purely in OO and hammering FMs here and there to have my parallelism had a particular bad smell.  It would prevent me to assert some critical behavior via unit tests, for starters, and it would also add this new responsibility, running in parallel, to weird places with code that looked boring and repetitive (take data from classes, run fm, take data back…).

So I decided to find an OO approach to parallelism in ABAP, and took Java Thread as inspiration. I was particularly drawn to Java Thread  given its simple Runnable interface, which allows developers to quickly wrap what needs to be done in parallel in a single method. I could use it to simply call the existing methods I already had. Below is an example on how it would look like in Java.

There are probably hundreds of similar implementations to this out there. Hope this one can be useful for some of you. My concept is exactly the same as in Java, having the Runnable interface and the Thread as the starting point.  As I’m used to (and like) the callback idea behind Javascript, I’ve thrown it into to mix. It made some of the code I needed easier to write and test. It looks something like this: 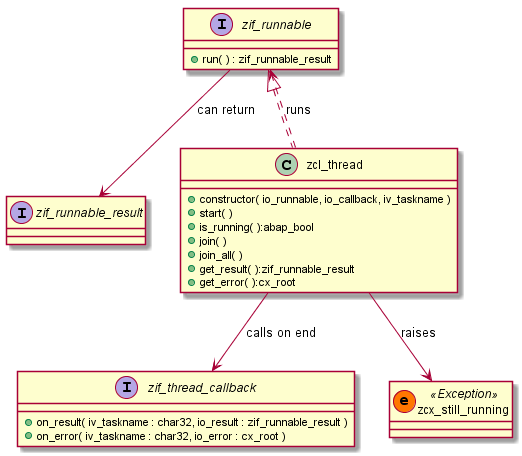 There is a thread factory interface and some default implementations too, which I’ve discarded from the diagram, to help unit test classes using Threads.

You can check git for the most up to date documentation. I´m putting some examples here to show how to use it in general.

The examples below are building up from previous examples. So zc_my_runnable is not always declared and its implementation is the one from its last time defined.

Simply implement your runnable interface, give it to a Thread and start it. The drawback of this is that is up to the caller to manage how many Threads can run in parallel, and implement logic wait for Threads to finish so others can start and so forth.

If your program will have 2 or 3 threads that is ok and this way suits you.  But if you are splitting large data into smaller parts, if it ends up 100 smaller parts this will consume all of your system resources.

Always prefer using a Pool Executor like in the next section below.

The thread pool executor is an executor service that allows to limit the number of threads that can run in parallel based on its pool size, allowing to work to be forked indefinitely without consuming all system resources. Java has several executor services implementations, I’m delivering a basic one that can be extended as seem fit.

The runnable interface implementation is the same as the previous example.

You can get the result of your threads in multiple ways, but all require that your result be class implementing the zif_runnable_result interface.

Ideally, you want your results to be separate objects, as it should be significantly smaller than your runnable in terms of data size and this plays a role in resource consumption and the serialization process behind threads.

In the example below, however, we are implementing it in the runnable itself.

If you are creating your threads manually, the result will come from the Thread get_result( ) method. If this method is called before finished, zcx_still_running is raised. You can check the thread was successful with get_error( ).

Executors don’t return the Threads created, but rather a Future representing that Thread result. When asking the Future for its result, it will wait for the termination of its Thread if it is still running. Therefore the following code is synchronous but runs in parallel (different session). If an error happens during the runnable execution, the Future will raise zcx_thread_execution with the error as its previous exception.

For actual async and parallel code to execute, wait for the executor to terminate.

Simply implement the zif_thread_callback interface and give it to Threads or Executors and use its on_result to collect, merge or aknowledge results as you please.

The callback object must have a valid reference throughout the lifecycle of the Threads.

Feel free to check the code behind it. What is happening is the serialization of the runnable so it can be sent to a function module as a string. This FM is called using options starting new task and on end of task. In the FM, the runnable is deserialized and its run method is called. Whatever result or error that happen are serialized by the FM and deserialized back by the Thread class. If a callback routine is defined, it is called with the result or error. This means a couple of things.

SAP does have something in newer versions, check the comments about cl_abap_parallel. I think overall we still need some other tools to allow an raw OO implementation to the philosopher’s dinner problem.

But, as I say this I also realize we are moving away from heavy process and relying on more stream like flows with small API endpoints. In any case, this is still a tool that can be used when needed.

Yes, very nice! I did come across it when doing my research, seems to be a much more complete framework. With the memory area class to control running threads and all. Thanks for sharing, it would be nice to have it in normal abapGit format, tehere is this ThreadPoolExecutor I want to implement.

There is also https://github.com/victorizbitskiy/zconcurrency_api using SPTA framework, which I just found out.

Great job Felipe! Thanks for sharing

Most importantly this class is whitelisted in ABAP cloud.

Would you look at that! I was unaware of this.

However maybe I'm a couple of versions down (7.52). I don't have the if_abap_parallel interface and my version of cl_abap_parallel expects me to do the serialization/deserialization of parameters from outside...With the zif_runnable I don't need to worry about that...

But I will keep my eye on this, there is some code around max threads and dia wp that I might use in the future, thanks!

You might want check it in free trial version of streampunk. You need to pass the instance of class that implements if_abap_parallel

I wish I'd followed this approach when I wrote my parallel processing classes! I particularly like the use of serialisation.

Hehehe at this point I don't dwell too much on code I wrote a year back or more, they would give nightmares every night! Hope it can help next time 😉

Thanks for sharing your insights, Felipe!
I used to use STPA framework (or) classic function call in new dialog task.

I will be utilizing this method and also good to know about CL_ABAP_PARALLEL.
We all need a smart search tool to locate existing standard objects for our requirements (maybe by having relevant search keywords section, in the class definition, like we add to our blogs here)

I only recently heard about STPA, I need to look into deeper...I might change the internals of what I did to use it, if I see an advantage (and it is feasible).

I agree, my self I use the ABAP help frequently and it almost never presents class counterparts to some of the topics. Parallel and async will bring the normal RFC FM calls, for example. I think the help is more focused on syntax but it would be nice if it hinted classes that help on those topics.

the idea is great, I immediately wanted to try it, but (!)

unfortunately nothing works, there is not a single working example ... everything does not work, a bunch of sitax errors etc...

Maybe you could give at least one example of what doesn't work for you. I don't have a single syntax error.

Note: so that it works, you must pull the git repository and use a relevant ABAP version.

in the git repository I found an example that works, but not here in the article ...

Plus, of course...you must have it via abapgit or similar.

it would be convenient if the article contained executable examples that would not need to be modified, that's what I meant