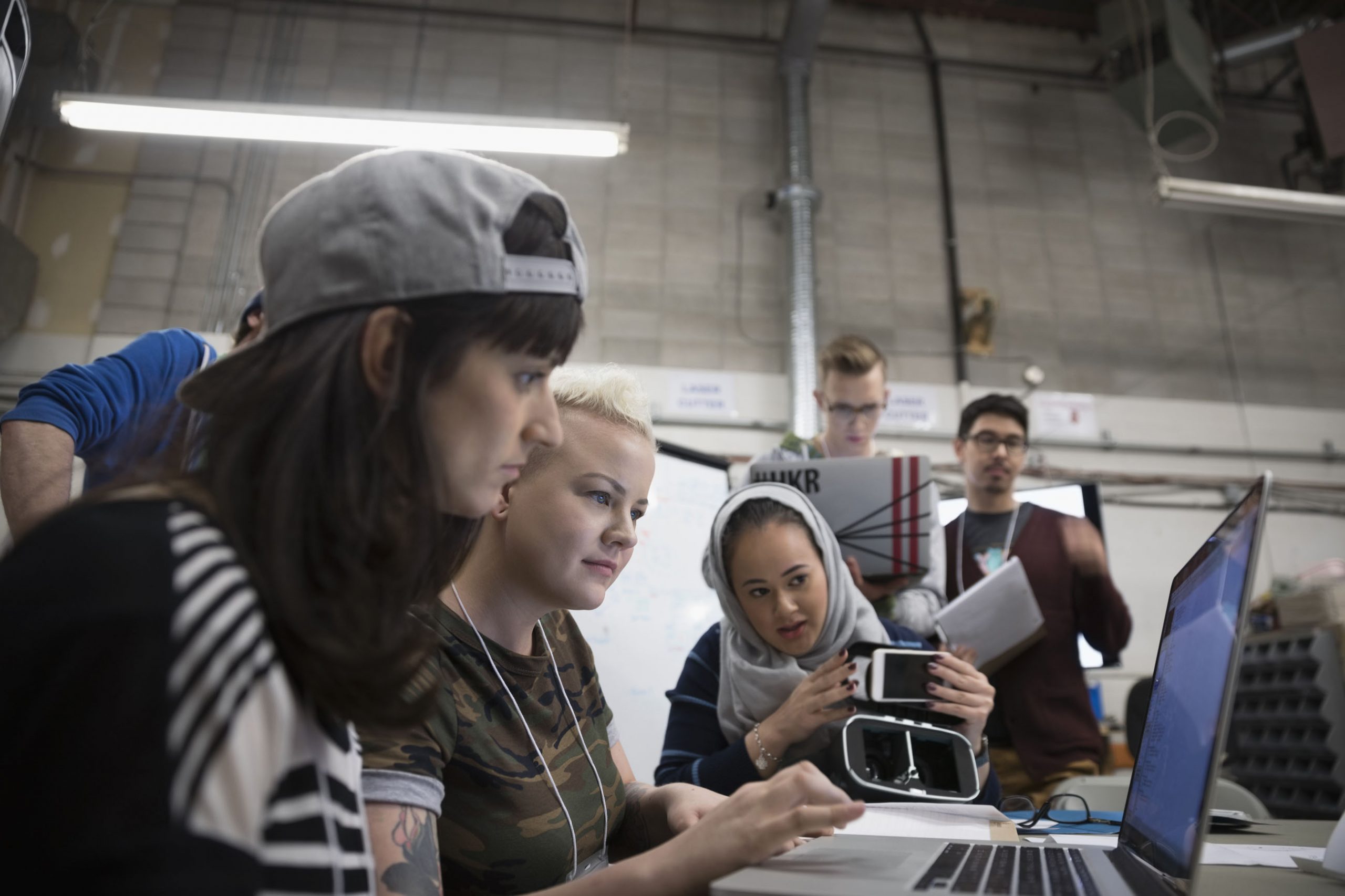 Observations about Women in Open Source

Having worked in the SAP Open Source Program Office since 2019, I drive business development, manage communities such as the “SAP Open Source Champions” and engage with different internal and external groups and stakeholders about topics related to open source. From the very beginning, I noticed that open-source developers are extremely motivated and passionate about their projects and communities to an extent that they also contribute code in their spare time. In my personal experience, while collaborating with different teams, I observed that open-source teams and networks are diverse in terms of culture, yet that there is an imbalance in relation to gender. In order to better understand this gender disparity, I searched for data and statistics to get a more objective view. At the same time, I was curious to explore what women think about developing software the open-source way.

Let me share data from universities which might indicate a first explanation to my observation above. The German weekly newspaper DIE ZEIT published an interesting overview of different fields of studies in October 2019, based on statistics by the Federal Statistical Office. During the past two decades, the number of female students in computer science has been around 20%. What strikes me is the comparison to Mathematics, where the ratio is in favor of women. Numbers are similar in the US, where only 18% of bachelor’s degrees in computer science are earned by women, according to the Bureau of Labor Statistics. Looking back at the days when computer technology first evolved in the 50s and 60s, this seems ironic: During these early days, women made up most of the computing workforce. Yet not all countries see such a gender disparity in computer education: An OECD study analyzed that the ratio of women with a degree in computer science in India was 45% back in 2014, quoted in a paper by researchers about gender ratio in education.

The OpenStack gender diversity report, conducted in July 2017 in cooperation with Intel and Bitergia, is another proof of the gender gap when it comes to open source. (OpenStack is an open-source cloud computing infrastructure software project with a large and highly active community). While this research paper explores leadership roles as well as technical contributors with respect to gender diversity, I would like to draw attention to code contributions (page 14 ff). The percentage of contributions by women from 2013 to 2017 in the OpenStack Git repositories was about 7% (see figure below). With one out of ten, the disparity of female versus male developers who were authoring those commits is nearly just as high. 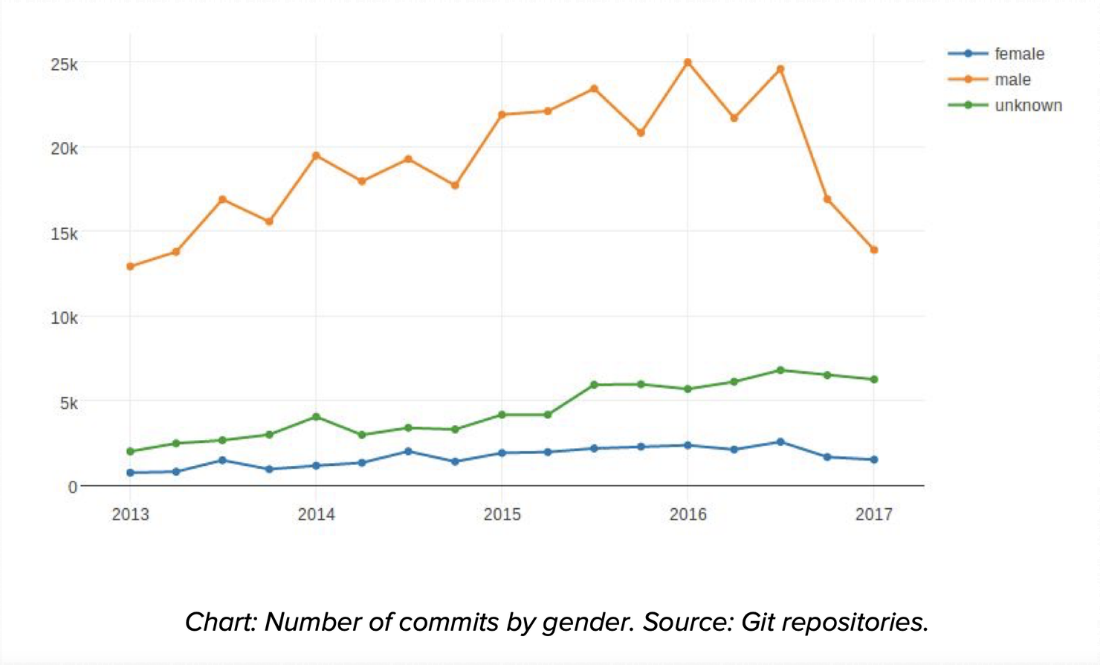 While looking for female stakeholders in the field of open source, I was introduced to Ana Jimenez Santamaria, a Data Science expert and open-source enthusiast who recently started as a Program Manager in the TODO Group (part of the Linux Foundation). Ana lives in Madrid and previously worked for Bitergia, a company specialized in Software Development Analytics. She was an active contributor to various open-source projects at Bitergia and is an advocate of open source. It is the grateful, collaborative behavior in the open-source community which fascinates her most about open source. “At the same time, open source allows you to leave your own footprint in the world of code or documentation”; a reasoning which many open-source contributors share. When discussing the gender peculiarities in open source, Ana made a comment which I would like to underline: “Communities live from diversity!” This especially holds true for achieving innovation or taking advantage of different viewpoints to create something new. Having a background in Data Science, Ana indicated additional sources of gender studies around open source, such as a gender diversity analysis based on Linux kernel contributions or data on gender diversity within the Jitsi open-source project (blog by Ana Jimenez published in July 2020). Those analyses confirm the above findings that female contributors are a minority with contribution rates around or below 10%.

While the above data underlines the existing gender gap with open source, I still wanted to understand the motivation of women within the open-source community. Therefore, I searched for female open-source contributors in our internal open-source dedicated slack channel and carried out interviews which I would like to summarize in the following part of this blog. All interviewees hold a Master’s degree in Computer Science or a related field (such as IT Systems Engineering). It seems that the individual benefits of engaging in open source are manifold, and all my interview partners share similar reasons for enjoying their work and developing software with open-source projects.

One positive aspect is that open source allows them to give something back to the community while collaboration is a common means to solve a problem or create something new. Another plus indicated by all female developers is that the open-source culture nurtures a respectful and honest way of communicating. This is something I have noticed myself over time while working with different open-source teams in the SAP Open Source Program Office. Uliana Caceres, a developer of the open-source project Luigi in Munich, summarized these characteristics by saying that “open source is more purposeful” with all the immediate and constructive feedback and collaboration with other internal and external contributors.

A second aspect is visibility: Open source exposes a developer to the public. Therefore, all my interviewees focus a lot on quality and good documentation. Your code can get rated by peers, who reward high quality with an extra star. You can use specific tools which rate the quality of your code visible for your manager or peers for instance. And you can even create your personal brand, which might help if you are applying for a job in another company. Or, as Ana indicated earlier, open source allows you to leave your individual footprint.

Sticking to the positive aspects of open source, a great side-effect of participating in open source is that you learn while reading, inspecting, or contributing to other people’s code or documentation. Not only can coding skills be improved with active contributions to projects, but also, soft skills are trained through community management, for instance, for which empathy and understanding are needed. Josephine Rückert, Senior Developer for SAP Data Intelligence in security and diagnostics in Potsdam, underlines the importance of “learning by doing” with open-source projects. Josie engages with open source outside of her work area in her spare time: She is an active software developer driving and supporting an open-source project (The Terasology Foundation) for which she mentored students during their “Google Summer of Code” internship. Besides, she manages the community for this third-party open-source project.

The conversations with female open-source contributors highlighted the consensus that in open-source development it is easy and common practice to share expertise with multiple audiences – whether among colleagues, customers, or peers in general. One colleague, for instance, teaches workshops, others pass their knowledge along by providing good documentation or samples. Knowledge for everybody – this intention is apt with open source and confirmed by all interviewees. GitHub, where you find most of SAP’s open-source repositories, is well suited to share content, such as documentation, sample code or to answer questions – a good learning environment even on a large scale.

All female open-source enthusiasts valued the level of freedom, ownership, and especially the individual responsibility which they relate to open-source development. They do not mind going the extra mile, like coding a sample that is not described in the specifications or not within the immediate scope or answering a pull request during their weekend are just examples of their “on top” engagement. It seems to me that with the qualities described above, software development becomes more sustainable and can provide high quality.

Yet, there are certain constraints for developers with open source, especially in the enterprise context. Product standards and guidelines need to be met. It is important that developers at SAP are aware of compliance risks, security requirements, and maintenance obligations. Marika  Marszalkowski, Senior Developer in Potsdam and lead for open sourcing major parts of the SAP Cloud SDK, pointed out that in an enterprise environment “there are different rules, than if you were an independent developer”. The good thing is that SAP offers its teams and developers like Marika support by automated processes, tools, and experts.

Marika likes the GitHub environment for support and maintenance with its direct way to give immediate feedback. When talking about GitHub, I noticed the same positive excitement in another colleague’s voice. She showed me tools for GitHub projects that she uses for her open-source components. These tools have features that decrease security risks by indicating vulnerabilities or rate code quality, others focus on collaboration, testing or release management. All in all, a very developer-friendly environment. (Certain tools are recommended by SAP to our developers and open-source teams, in order to ensure adherence to product standards by our open-source components.)

These were just some voices and thoughts about open source. In a nutshell, all these female open-source enthusiasts demonstrated the same passion, motivation, and dedication to developing open source that I had previously observed in my existing network. Their reasoning for leaving a footprint with open source and taking ownership does not seem gender-specific. They demonstrated that software development is not at all a job in isolation but very much a team effort, where soft skills are as important as technical knowledge.

If girls knew, while going to school, that computer science is so much fun, the gender gap at universities mentioned at the beginning of this article might change. Young women should feel encouraged by these role models to choose a career in computer science, especially if they already had fun with math and sciences at school.

While open source and computer sciences are still areas with gender disparity, collaborative software development benefits from diverse teams and women can enrich open-source projects and in any joint software development. With this small contribution to the Women’s Equality Day, I would like to thank all my interview partners for their time and for spreading these extremely positive vibes. Their motivation is contagious and their enthusiasm for open source is genuine.