Enhancing the system behaviour of SuccessFactors with SAP Intelligent RPA

Below are some of the customer requirement which is currently a limitation or working as expected.  I have used SAP Intelligent RPA to overcome these challenges.

In situations wherein the employees are working at remote locations without access to their SuccessFactors system, an admin could raise the leave requests in the system on their behalf. These would however need to be approved by their respective managers. As per the current system behaviour in SuccessFactors Metadata Framework (MDF), admins would not be able to use the Import option to create data records in the system in bulk, as workflows do not trigger in this scenario. The alternate would be to manually create these entries via the UI one by one to trigger the applicable workflow. This could be tedious for the admin, who would perhaps need to raise multiple leave requests for a sizeable number of employees.

Using SAP Intelligent RPA we could automate the process of an admin having to manually create the huge volume of leave requests via the UI one-by-one. Similar automation could be used in any MDF-based scenario requiring workflows.​ The automation would make it hassle-free for the admin to get the leave requests created in the system for a big group of employees with their relevant workflows triggered. It could also prevent potential human errors that may occur during manual data creation.​ 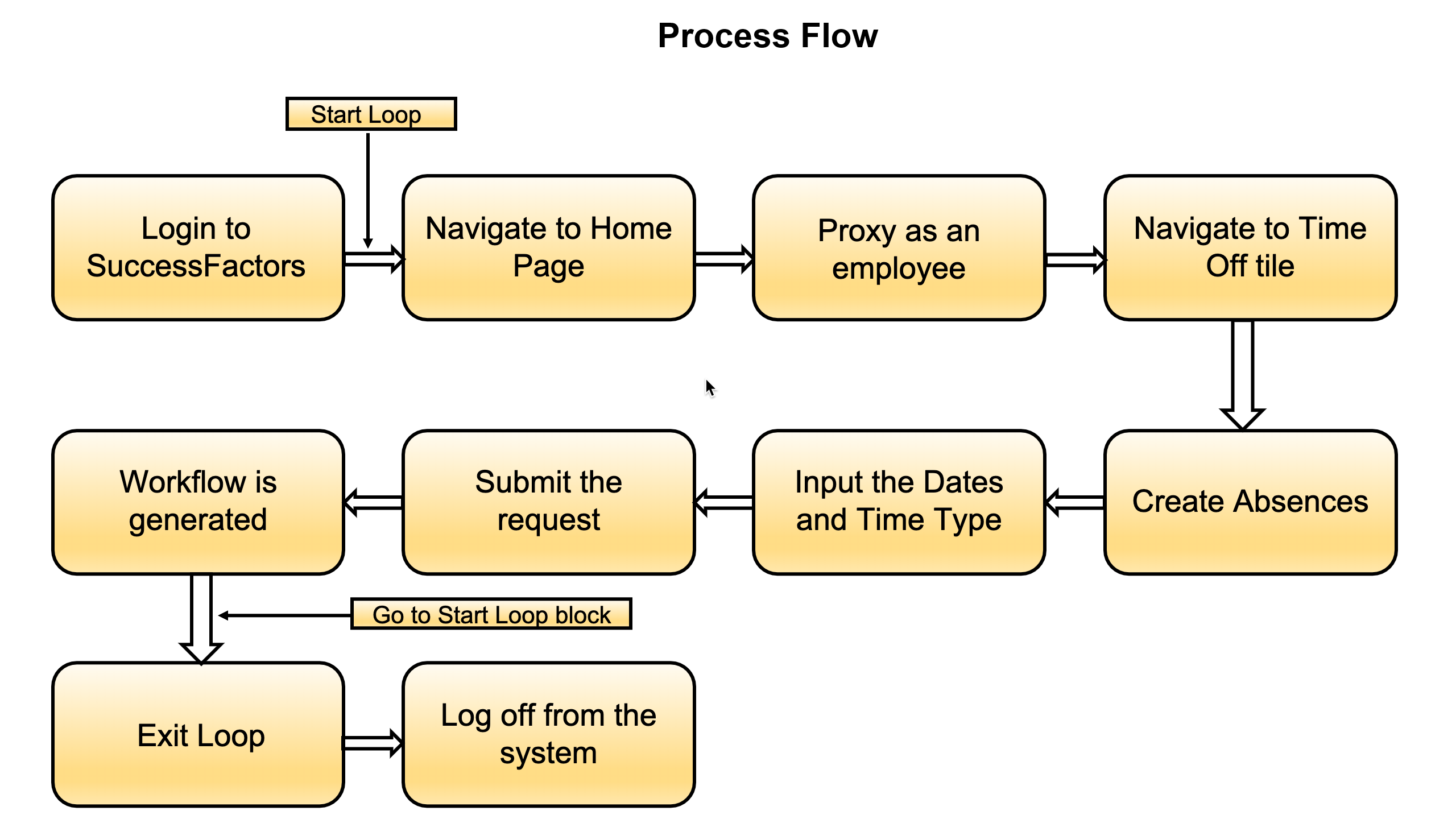 There are a few scenarios where the recruiters would hire candidates in bulk. For example, mass campus recruitment, mass recruitment for the factory worker, mass hiring for seasonal workers etc. There are situations where the attrition rates are high and they will have to do mass recruitment throughout the year. In a mass recruitment event currently, the system can mass upload the resumes, mass moving the candidates from one status to another but is not capable of mass offer letter generation. There are no alternate options available other than creating the offer letters one by one by going into each candidate’s profile, which is a time-consuming and tedious task for recruiters or HRs.

Using SAP Intelligent RPA we can overcome this limitation. The automation would make it hassle-free and save a lot of time for the Recruiter to send multiple offer letters to selected candidates in a mass hiring scenario.

Using SAP Intelligent RPA, the automation would create multiple requisitions from multiple positions which have different job information associated. This would help the recruiting users to save time in the repetitive manual task. The process would also reduce the manual errors that might occur due to the manual filling of data

These are a few examples. In this way, we can use SAP Intelligent RPA for many processes in SuccessFactors.

Thanks for writing the article. Would you please advise on the following.

(1) For existing Sf customers, how does the license works? Can we use the same license across all modules of Sf including ECP / LMS?

(2) Is SAP planning to make this tool similar to other popular RPA tools like Automation anywhere? Is there any SAP document explaining the limitations of this tool when compared to industry leading RPA tools?

(3) Can we use the tool for adding test employees / contingent workers for QA activities (like unit testing, SIT)?

(4) Can we use the tool to automate existing regression test suite (for example: Sf EC hire to retire key events verification post half yearly updates in the non production instance)?

(1) iRPA has a separate license. With that licence, I think, you can use it in all modules. I request you to contact your account manager or CEE for licensing part.

(2) Yes, this is an RPA tool. We have come up with iRPA 2.0 recently. I am not aware of any documentation comparing the different tools.

Thank you for sharing this information Dharmin! Great work with the demos.

Is SAP planning to bring these scenarios as a part of pre-delivered iRPA content?

As of now, there are no such plans.

Thanks Dharmin. I believe such pre-delivered content would be critical for customers to choose iRPA over other popular RPA solutions such as Automation Anywhere

I understand, I will pass on your feedback to the team.