SAP Identity Management (IDM) is a key component of the security portfolio of SAP, which is responsible for managing the identity master data of employees, externals, administrator, and other entities.

SAP IDM is one central location for managing the user Identities and permission (privileges and Business role), synchronizing data between system and application and maintaining password across connected systems i.e. both SAP and non-SAP systems. Hence, with use of SAP Identity management tool, companies can manage and provide user access in different heterogenous environment securely and efficiently.

Now one needs to make sure that the SAP IDM is Compliant across SAP Landscapes in one integrated solution. This can be achieved by Integrating SAP IDM with SAP Access control where one can do risk validation before provisioning.

Using this solution, SAP IDM can execute provisioning to multiple target systems (ARQ) which are controlled by SAP Access Control to ensure compliance according to the rules implemented here in Access control (ARA). 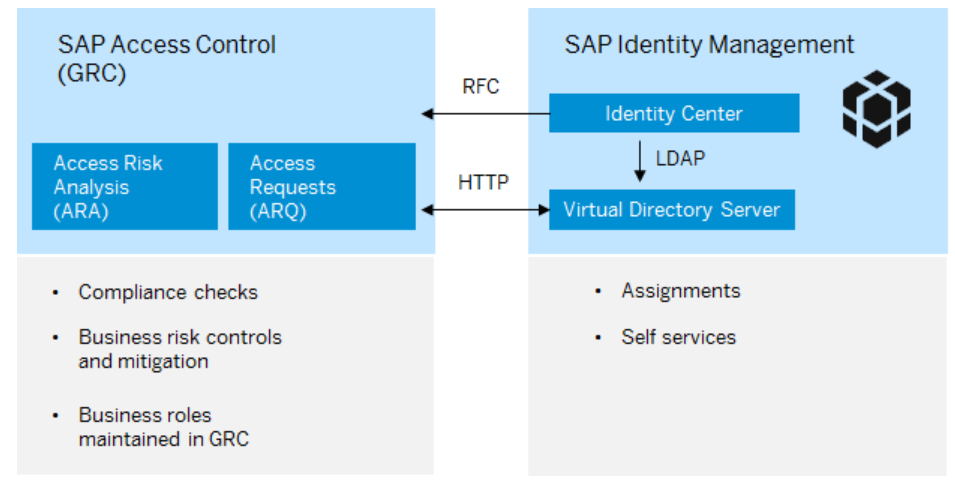 When Integrating SAP Identity management with SAP Access Control, one first needs to understand how the identity data is exported and imported between SAP IDM and SAP access control.

So, let’s start with discussing the components of SAP Identity Management that are used in the following way:

Optionally, another Virtual Directory Server can be deployed as an Identity Service on an AS Java server that deals with event-based result handling.

Depending on the communication defined between Identity management and Access Control, one can trigger below calls for implementing role synchronization.

The integration scenarios exist based on two factors:

Now the GRC Provisioning Framework can be configured accordingly to deal with any combination of these two.

There are two landscape configuration scenarios for the integration: 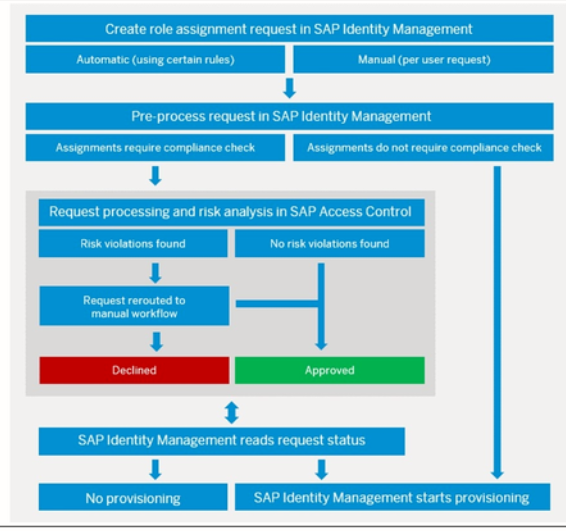 This Solution is recommended to use in exceptional cases only. In this scenario, the provisioning is performed both by SAP Identity Management (IDM) and SAP Access Control. SAP IDM is responsible for provisioning assignments not requiring compliance checks to multiple target system (SAP and Non -SAP), while SAP Access Control is used for provisioning assignments requiring Compliance checks to SAP ABAP target system. 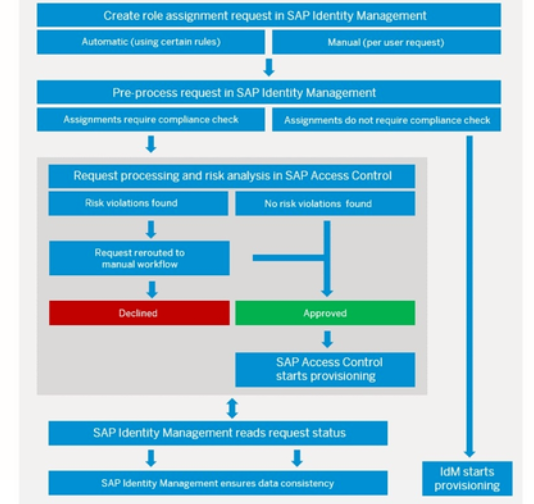 Two different approaches to handling a request processing result exist and only one of them can be active at a time.

2. Event Based (AC Call-back services): Instead of polling for the result, the Identity Management is informed about the status of the request when the processing is done. The information about this is sent by GRC, by executing its Exit service (GRAC_EXIT_FROM_IDM_WS) WS call to Identity Services. Only one call is made which makes this result handling scenario more vulnerable as this call may be lost (e.g. due to network issues)

Kindly check below link for information on the result handling scenarios.

The configuration process consists of the following steps:

**Optionally, configure the Identity Services if event based (call-back) result handling is needed. **

The GRC provisioning framework is delivered as a separate package “com.sap.idm.grc.grc10” in SAP Identity Management 8.0.

The package file “com.sap.idm.grc.grc10.idmpck” is located in the folder: 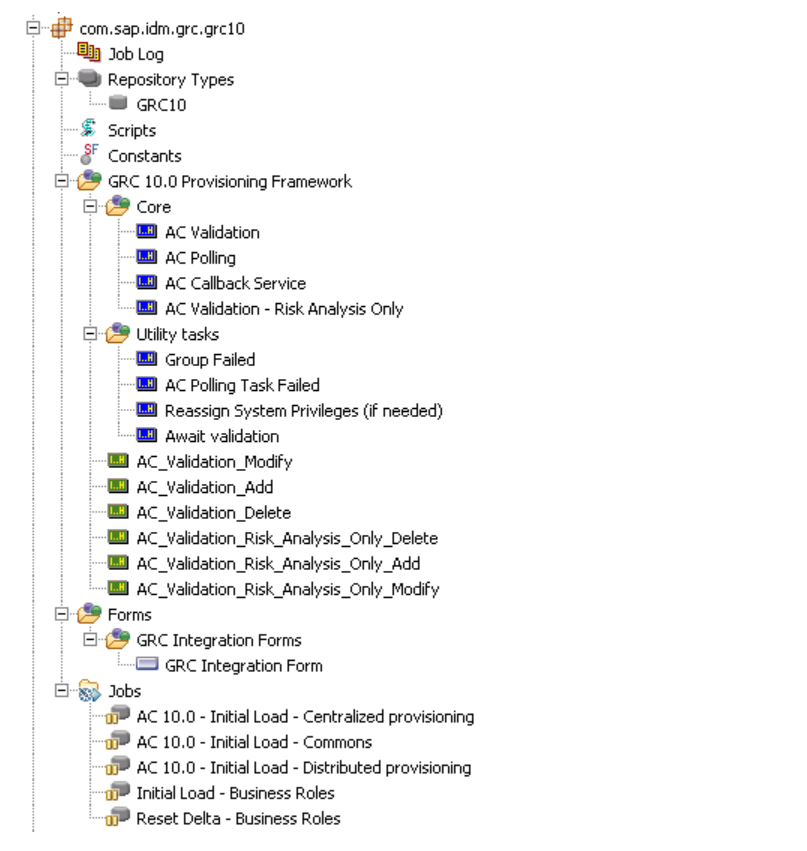 This package com.sap.idm.grc.grc10 provides a set of internal and public processes, forms and jobs.

For detail information on importing refer to the below link

Refer to the below link on how to configure each scenario.

The Highlighted configuration must be maintained. 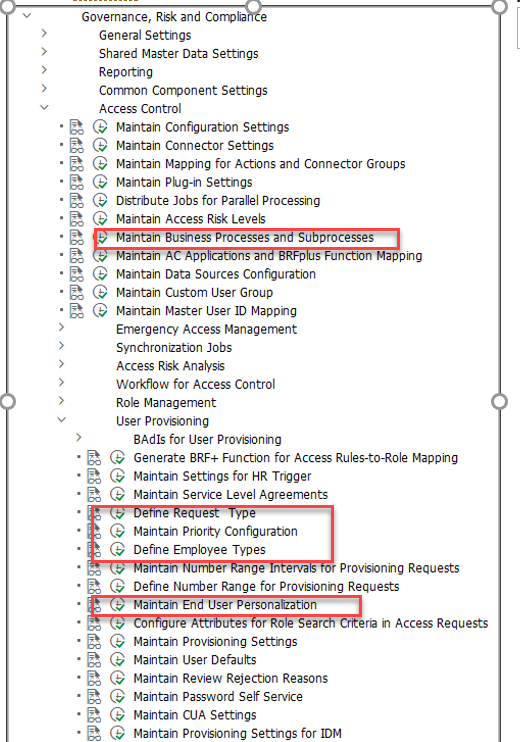 3. Creating a Connector– A connector needs to be created which can be used for Callback Service and a HTTP connection,

1. Navigate to Common Component Settings/Integration Framework in the structure of your GRC system.
2. Start the IMG activity “Create Connectors”.
3. Follow the IMG activity documentation to create a new connection of type G, i.e. HTTP Connections to External Server. You may name it e.g. NW_IDM72. The connection needs to point to the J2EE engine where the Virtual Directory Server web service (the callback service) is deployed as a target system.

HOW TO CHECK WEBSERVICES (in GRC system)

7. Switch to “XML editor” once the template is opened.

8.Fill in the correct test Input data (refer to the Metadata link below)  and execute.

9.The response will be displayed.

You can check the below link to refer to the Input data required for GRAC_USER_ACCES_WS (User Access Request Service) web-service.

IMPORTANT NOTE: You can refer to the below Blog on how to check Webservices in IDM 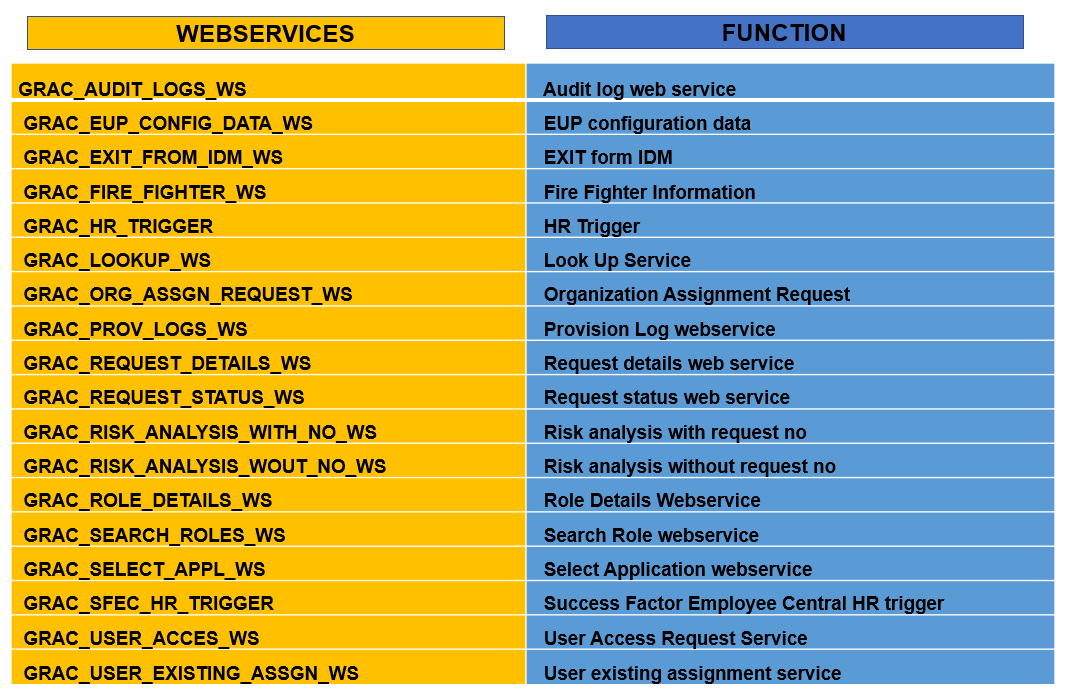 The enhanced integration between SAP Identity Management 8.0 and SAP Access Control 12.0 or higher allows you to synchronize business roles between both systems before user provisioning.

Refer to the below SAP KBA & Links for configuration information

This suggests, Centralized provisioning will now include GRC as well as the source system of generating requests as well as assigning the privileges