Blog post update: With the 2202 release, we have added one more administrative control – “Exceeds Planned Work”. See here for the description.

Time recording on projects is a critical component of the order-to-cash business process. As part of the project set up, the project manager could specify which tasks would be used for recording time entries, and whether an approval workflow would be required. Over the last few years, we have had a number of improvement requests that were submitted asking for features that ease the administration of these time entries – right from delegating the time recording approvals, to providing controls to increase the correctness of these time entries.

With the 2108 release, we’ve released new features that help a project manager reduce their administrative effort for managing the time entries on their project.

These “time recording controls” as we like to call them, can be set in the Project management header task in a new tab, called Project Settings. 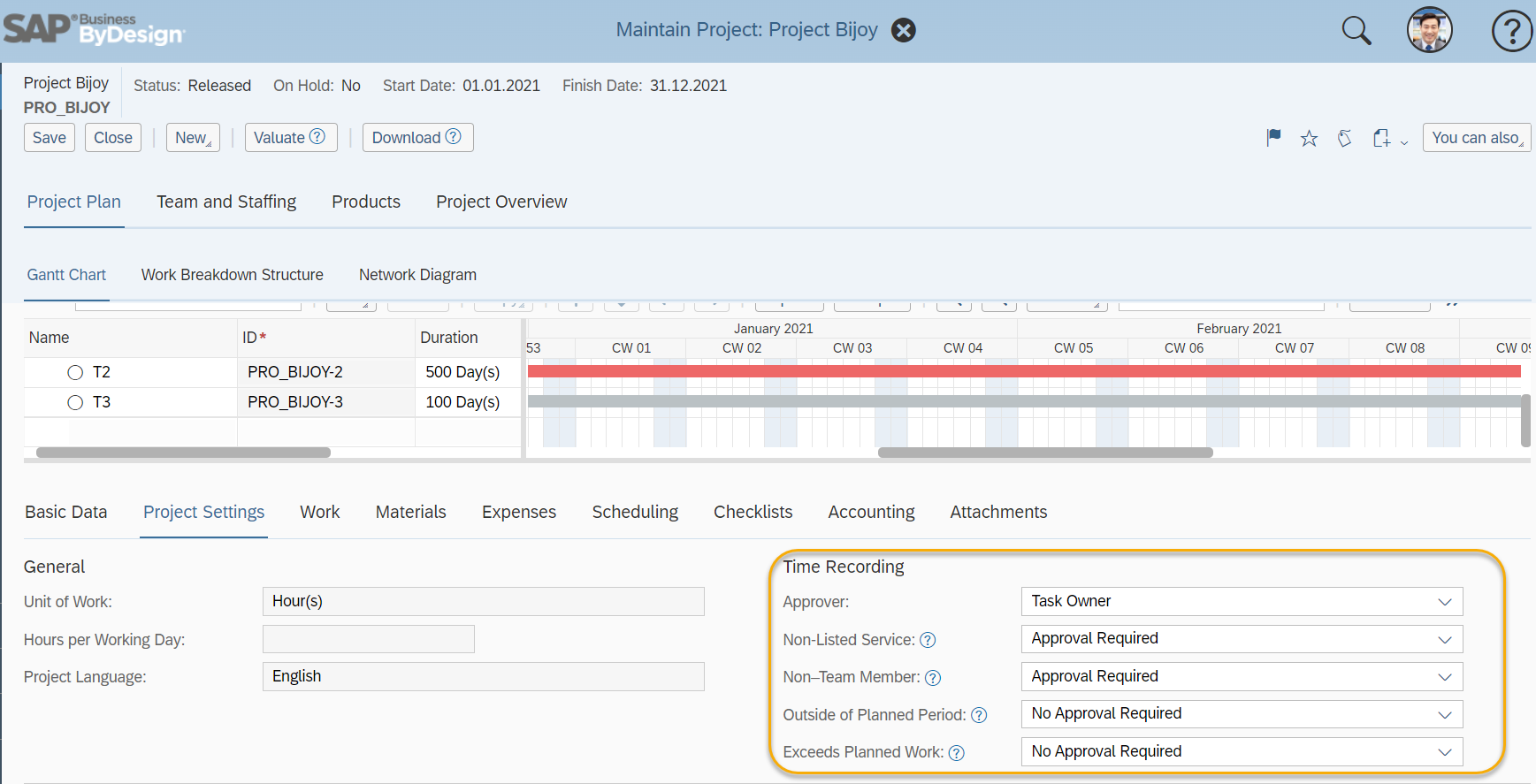 If for any of the above controls, the value is set to “Not allowed“, the employee would see such an error in their time sheet for those entries that match the condition when the entries are released.

Please note – these conditions are used only if the time recording setting on the Basic Data on each task is set to No Approval Required.

In the Team and Staffing → Teams tab, in the Team Members list, one can also set whether time recording by specific team members should always be sent for approval.

With the 2108 release, the project manager needs to explicitly specify if time entries by service agents need approval irrespective of the work packages. By default, this checkbox is unchecked.

Reason for Submission for approval

With so many controls in place, we understand that it can be confusing for the project manager to know why a specific time entry has appeared in the list for approval.

To make things transparent, the Project Management → Approvals → Time Recording list has a new attribute that provides clarity to the project manager as to why the specific time entry has appeared for approval. This would help the approver understand the context, and make a better decision on whether the time entry is to be approved or not. It takes into account all the time recording settings discussed above. Here is an example screenshot. This enhancement is also available in the ByDesign mobile app, under the Manager Approvals Tile.

Please note: only those time entries which are submitted for approval after the system upgrades to release 2108 would have this attribute filled out.

All the Time Recording Controls mentioned above would be available automatically on system upgrade to release 2108. Thank you for reading. If you have any questions or suggestions, please leave a comment, I’d love to hear your opinion. Have a great day ! 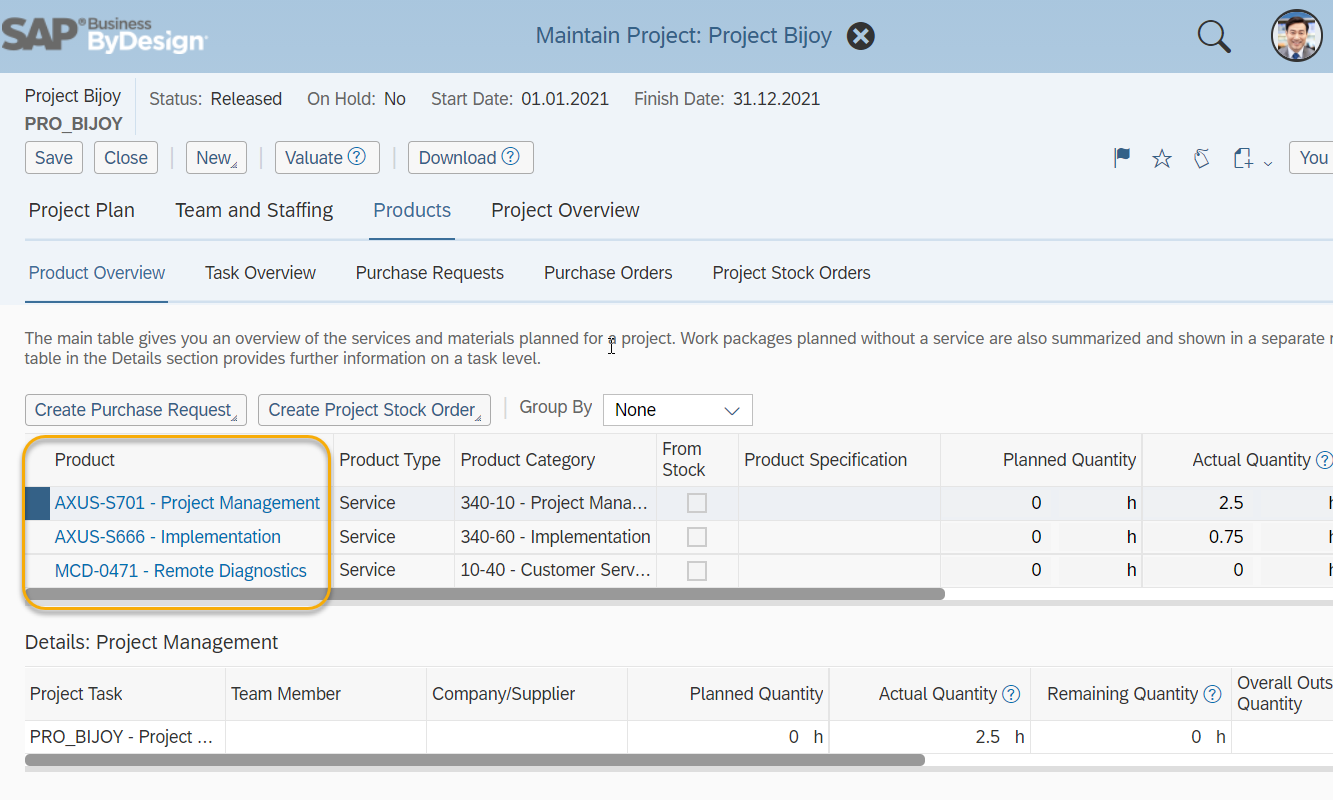 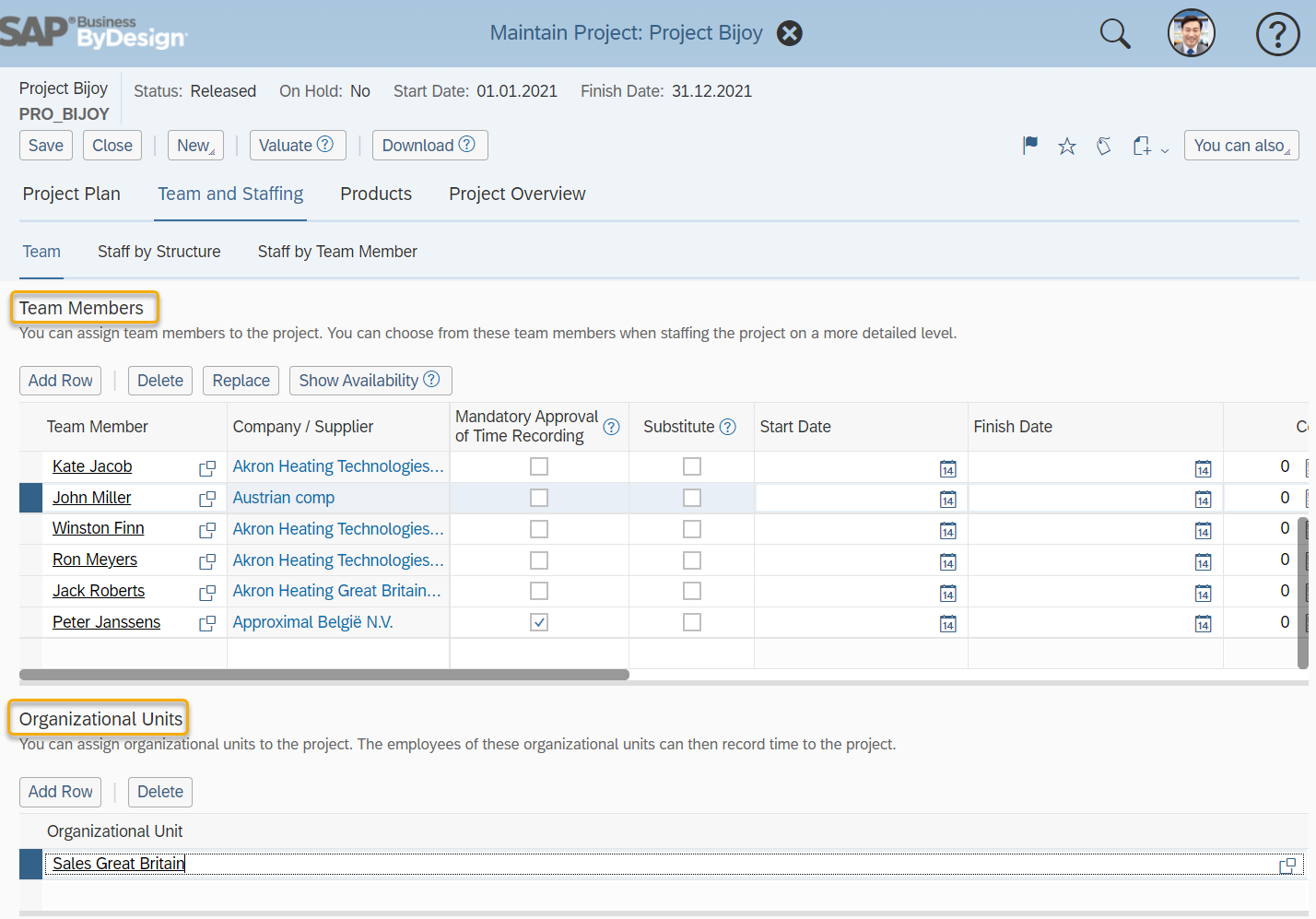 thanks for this post and the great new feature.

Just for clarification: You mention release 2111 - but if I got it right, the features are already available as of 2108, right?

Thank you for pointing this out ! It was a typo, i've corrected the blog post and updated it to be release 2108.

Thanks for this updates.
very useful for time recordings on projects.

Thank you for your detailed posting on this functionality! It is really great to have more flexibility in how to manage the project's approval.

I have just a few questions on this functionality:

Thank you for your questions !

As of now, the default for the non-listed services, non-team members and outside of planned period is "No Approval Required". We did discuss the possibility of having defaults - similar to how defaults for project types are maintained via Fine tuning in business configuration, but we are waiting for more feedback from users before putting that in our development backlog. What would really help is if you could create an improvement request on our Influence portal  so other customers could vote on it - this would help us in gauging the priority.

When there are multiple settings applicable for a specific time entry, the most restrictive would apply. So in the example you've mentioned, the time entries on that task would always go for approval. Similarly, if the task's time recording setting has the value "Approval Required", while project settings state that for non-team members, time recording is "Not Allowed", then if a non-team member tries to record time on that task, they would have a error message displayed on their timesheet when they release the time entry.

After the update, the default on all projects (existing and new) for non-team members is defaulted to "Approval Required". This is causing a lot of problems on existing projects. Please advise.

Can we set up a short call to discuss the issues you are facing ?

That would be great. Can you let me know when you might be available?

I am free for the first half this week, as well as next week. I'd like to send you the details via a message, but the system only allows me to do so for those who "Follow" my profile. Could you please click on the "Follow" button that's under my profile picture ?

Those settings are really helpful. But why are they restricted to tasks where the time recording setting on the Basic Data on each task is set to No Approval Required?

In most of our projects the Project Manager/Approver wants to approve the hours worked to ensure that the employees work a reasonable time on the Tasks. At the same time they do not want to think of the Service or if the day of the time recording is within the planned period.

So if I understood correct we have to decide between:

It would be highly useful to use the settings and still be abel to approve the time recording. Otherwise we cannot use this new features.

Do you see a possibility that this will be changed in another upcomming release?

Thank you very much for your feedback !

I'd like to understand the requirement "In most of our projects the Project Manager/Approver wants to approve the hours worked to ensure that the employees work a reasonable time on the Tasks" . Does this mean that project managers would plan, for example, 25 hours on a work package, and they check the time entries to see that this is within the planned budget ?

If it is to do with ensuring that the time entries lie within the planned work, this is part of our product backlog and we hope to deliver it in one of the upcoming releases. The improvement request is also documented here - Improvement request: Actual hours recorded exceeding planned work

Do you see another reason why they typically need to check time entries, that we can automate to reduce their workload ?

Thank you for answering my comment. I very gladly will try to explain our requirements:

First of all: YES, beeing able to ensure that the time entries lie within the planned work is a feature we would love to have. So we are looking forward to moment when this feature will be delivered. 🙂

Regarding the current features:

Our core Business is to create individual Software Solutions for our customers. This is beeing realised via Projects (e.g.: We have a Project for customer XY to create a Software Solution that can handle YYY; the projects lasts 1.5 years and we staff it with a Project Manager, a Business Analyst/Requirements Engineer, X Backend Developer, Y Frontend Developer, UI/UX-Designer, ...).

Projectcontrolling is therefore very important for us. This means our PM's have to ensure that our employees time recordings are valid (booked in the correct time period, have the correct Services, do not exceed planned hours, booked only by employees who are part of the team) and reasonable (usually the Work Description is required; this enables the Project Manager to compare Worked Hours vs. what has been developed).

If employees need too much time for covering certain features the projects budget is effected. This is the reason why in almost all of our projects the Time Recording on Project Task needs Approval.

If the new features would also work when the Project Task needs Approval (currently they don't), the effort of our PMs would decrease which would help them and us a lot! Imagine that you have 5 employees in the Project Team and they book on 3 tasks/day. Therefore the PM has to check 5*3*5=75 time recordings per week. Currently the PM has to do 5 checks (see above). We therefore have 375 checks per week. Enabling the features for Tasks that need Approval would reduce the number of checks to currently 150 (75 as soons as the limit by planned hours is implemented). As of today (I just checked in our ByD System) we have 417 customer projects.

As I hopefully explained now in detail: Checking the Time Recording cannot be done automatically due to the reasonability check of the time recordings which happens daily or weekly (depending on the project), but performing all the checks costs a lot of time (which costs money).

It would be very helpful if the features would be available independent of the Time Recording Status. In case you do not fullfill our wish, I would recommend to at least disable the dropdowns in the project settings Tab to not confuse Project Manager when they configure their Projects.

p.s.: if you have any further questions I will happily answer them.

Can you tell me if our use case (as described above) will be taken into consideration?

We would very much appreciate it, if all 4 Time Recording features from the Project Settings would also kick-in/apply, if the Time Recording of the task is set to "Approval Required".

Our employees record their time in Jira and is being imported from there via an interface and CPI. We don't record any time directly in ByD (ok, it happened to me a few times as an admin to do some manual corrections directly in ByD).

It would be nice to default all options for the "no approval required" in our case.

Is there a way to filter or reduce the amount of available Activities in the "Edit Time Sheet" view? Some services are not allowed for a specific task. On the Edit Time Sheet, all services are visible after selecting the task. Therefore, the system is suggesting time recording activities that are forbidden for the task, which is causing unnecessary error messages.