How to prepare your SAP S/4HANA Conversion Project.

I. From the Project Manager perspective.

Customers have several options for their move to SAP S/4HANA. The most common approaches are: New Implementation, Selective Data Transition and Conversion (also known as Brownfield).

When a customer decides to go for the Conversion approach, it is usually for the following reasons:

Database size is an important factor to be considered but usually affects the downtime window rather than the complexity of the system preparation to be converted to SAP S/4HANA. 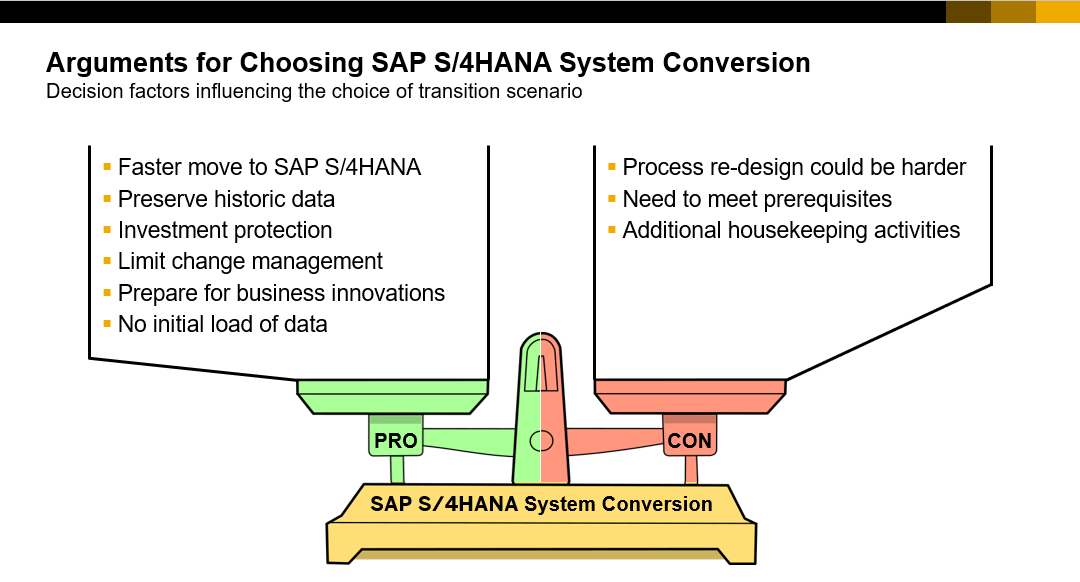 Once you decided that the conversion is the preferred option to move to SAP S/4HANA, you might ask yourself how to prepare the project, what are the relevant topics to estimate the project effort, how to set up the timeline, or how to decide about the number of conversion test iterations?

Before answering those questions, let me provide some indications which will make your project easier:

Sponsorship matters:
A conversion project is not only an IT project. Moving to SAP S/4HANA will have functional impact and will require the functional teams to assess and execute the functional changes and validate the system once it is converted to SAP S/4HANA. So, it’s important that the entire organization is aligned with the movement. Therefore, it is crucial to have a strong sponsor coming from the top.
Also, appropriate sponsorship will be very beneficial when convincing the customer organization about the downtime window for the conversion of the productive system.

It should be executed in your productive system or in a recent copy of it, and it will help you to identify:

Your functional consultants have to analyze the result of the RC and be able to estimate the effort behind adapting each of the items relevant for the conversion to SAP S/4HANA. Based on our experience the most effort consuming items are:

To estimate the effort, you will need the support of ABAPers and functional consultants as they will be able to detect if the changes on the custom code could have side effects on functional implementations. Some typical examples are the “order by” on select statements or the Material Number Field Length Extension.

The RC will identify those add-ons that are not compatible with SAP S/4HANA. These add-ons can block the conversion; therefore, they have to be removed from your system. If the functionalities that they offer are not available in SAP S/4HANA but are a business requirement you have to look for an alternative to meet these requirements. For 3rd party add-ons the best way to know if an add-on is compatible with SAP S/4HANA is to check it with the vendor.
With the business functions the situation is similar, incompatible business functions with SAP S/4HANA have to be removed from the source system.

These topics will be the main effort drivers to “only” prepare a system to be converted, but they are not as complex as they might seem.

To make the project effort estimation complete, you have to consider the effort of the actual conversion activities, the number of test conversion iterations to be executed, and the effort coming from other potential activities that might be needed for your project scope, e.g. validation activities..

The important thing from a PM perspective is not to miss any of the previous topics.

Another dimension to not forget is the landscape and hardware needs. The most common landscape running an SAP ECC system is: DEV -> QAS -> PRD, so for SAP S/4HANA, the same will be needed. It’s important to start the provisioning accordingly, and again, the RC will provide the relevant information about the SAP S/4HANA sizing needed including the potential DB growth. 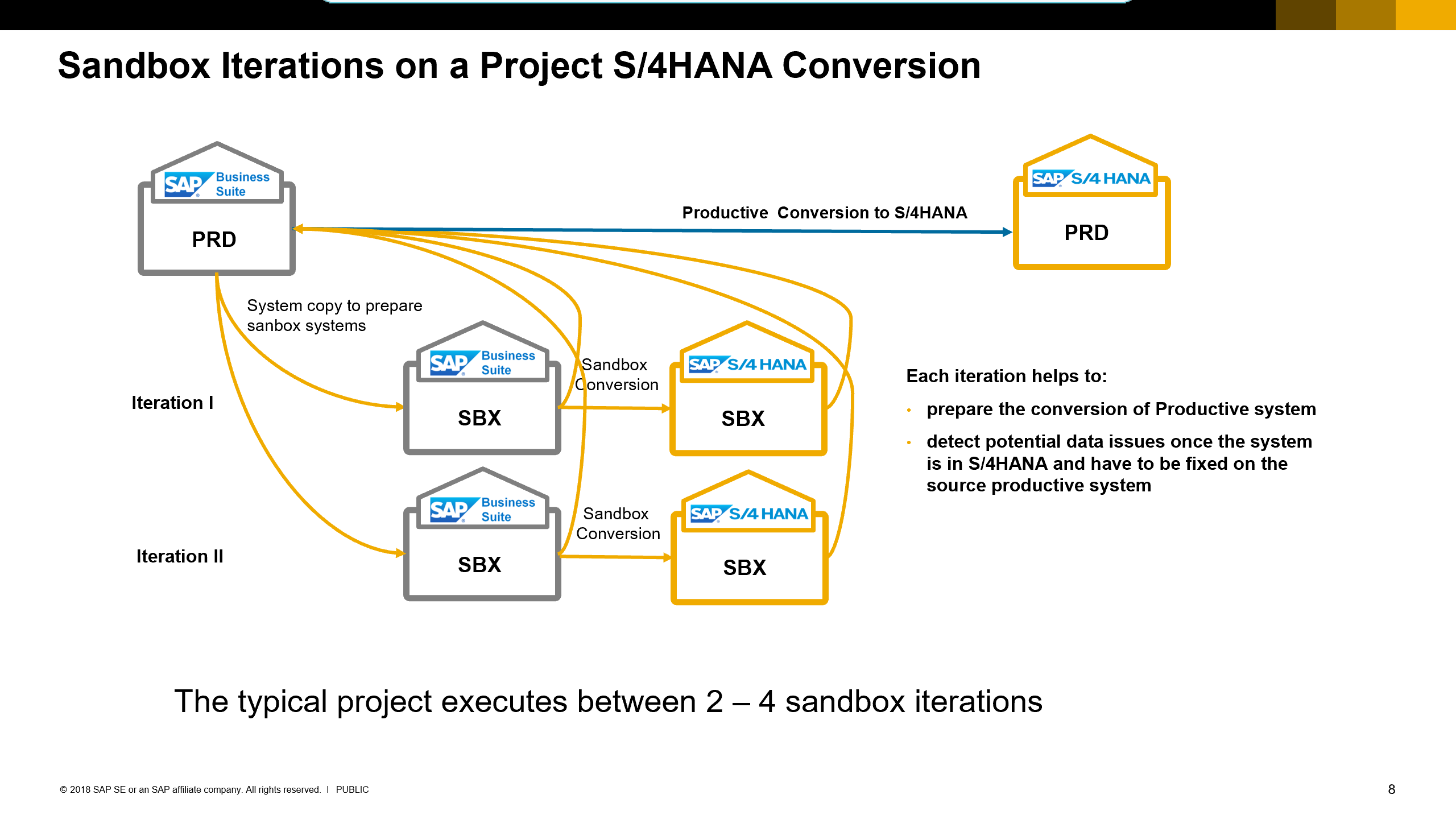 I usually approach a conversion project with the following major phases 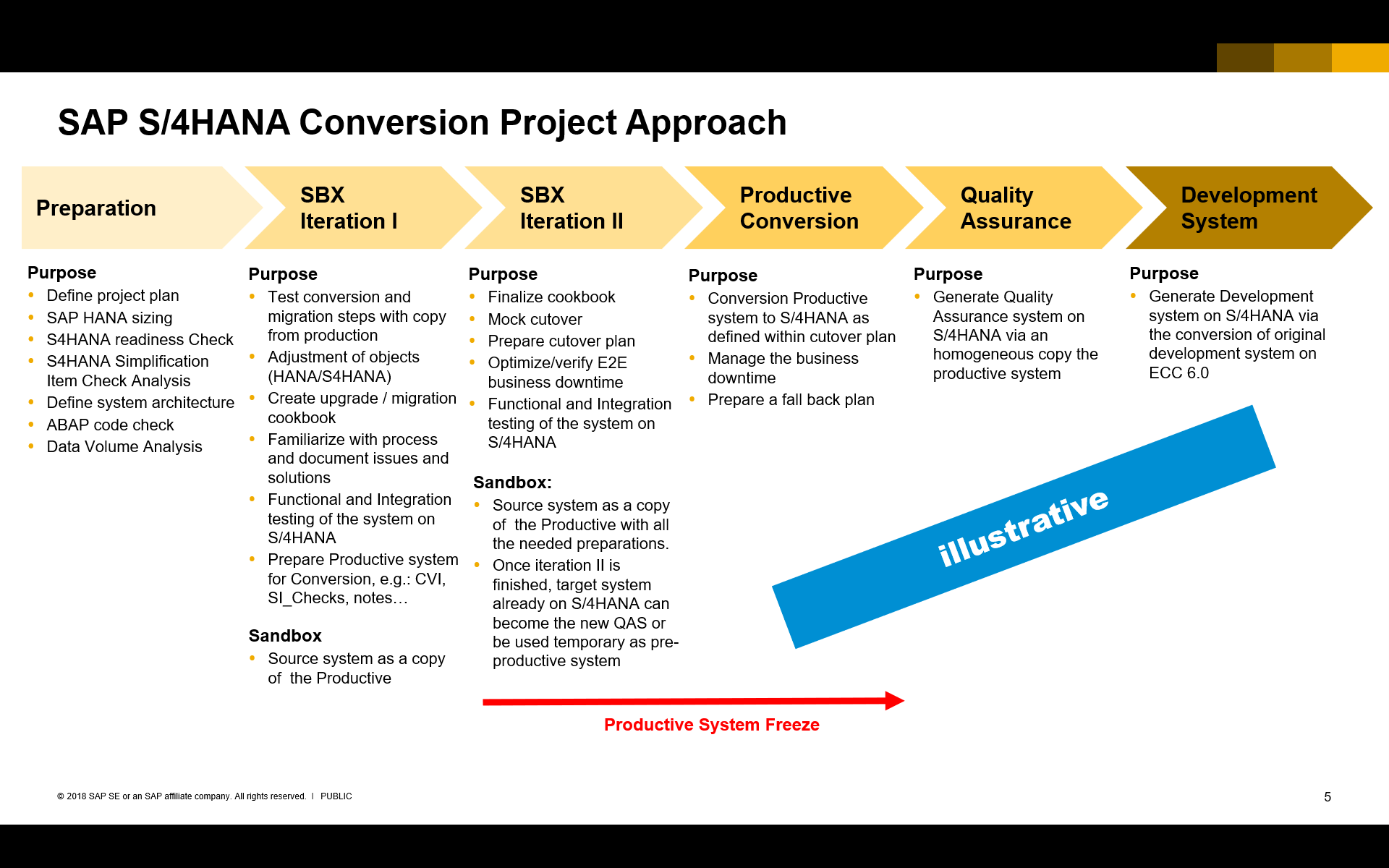 Fully described from the system perspective previously, we identify the functional and technical impacts of moving to SAP S/4HANA and the target architecture.

Just like in any other project we must define the project plan, the validation plan, and the resource plan, considering that both technical and functional consultants will be required, in-line with the simplification items detected.

To test the conversion process a sandbox system as recent copy of the productive system is needed. The source sandbox system should be as similar as possible to the productive in terms of hardware and processing capacity. This is crucial to plan the cut-over for going live as you have to record the amount of time that you spent during all the conversion steps.
For the same reason the sandbox target system must be aligned with what we will have as productive system in SAP S/4HANA and, of course, meet the minimum sizing requirements.
Don’t forget to follow the conversion guide, do not improvise.
Major activities during this phase will be:

This first conversion is very important to:

This is very important as during the next sandbox conversion iteration you will be able to test and validate that all these topics are correctly implemented.

With the results of this iteration you should be able to start to plan the duration of the downtime and the concrete go-live date according to the business needs. Customers usually look for long weekends as it’s easier to stop system operations for more time than on a regular weekend.

The number of sandbox conversion iterations is not fixed, it will depend on how successful the previous ones were.

Assuming that with the previous conversion test all activities, errors and their solutions were detected, Iteration II as the last one before the conversion of the productive system, is crucial as a dry run:

You will have a clear idea how long the uptime and downtime phase will take, so you can start to plan when the conversion activities in the productive system have to start to meet the go-live date.
All of this will be the basis for your cut-over plan.

Remark: During all the test conversion iterations and then during the conversion of the productive system it is crucial to maintain the same versions of tools and products. 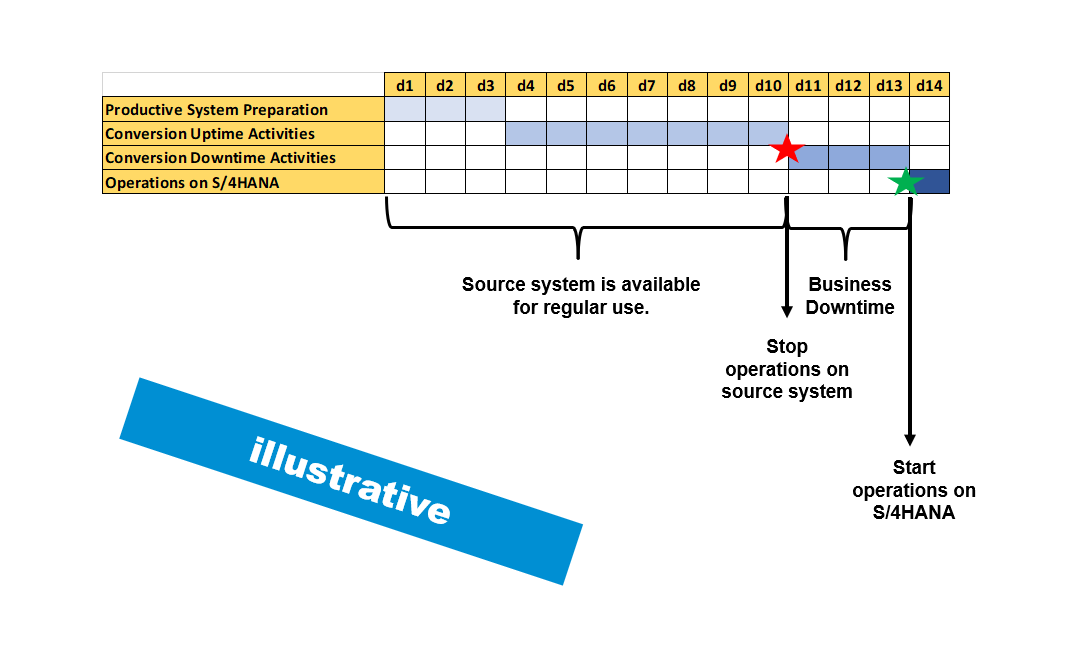 Start uptime phase of the conversion process with enough time to arrive at the downtime window with some buffer.

Remember that during this phase the system can be used as usual. This adds workload to the system which can provoke some activities to take a bit longer than initially planned.

Once the uptime is finished, you’re ready for the stop of operations.

The source productive system will be stopped, and a full backup needs to be made before continuing with the downtime conversion activities, just in case we need to activate a fallback plan.

All these activities and their duration were identified during the previous sandbox iteration runs.

Once the system is running on SAP S/4HANA, it’s important to test that the most critical processes are running as expected. Only then the new system in SAP S/4HANA can be released for regular operations and to all the users.

In case the productive conversion does not go as planned, the go-live needs to be stopped and the system reverted to the original one. It’s important to always include a fallback plan just in case of need.

Finally, you must complete your entire SAP S/4HANA landscape.

Meanwhile your Development (DEV) and Quality Assurance (QAS) system are moved to SAP S/4HANA, what usually is recommended is to use the last sandbox system converted as the pre-productive system.

The strategy commonly used for moving the DEV system to SAP S/4HANA is the conversion instead of a homogeneous copy from the productive system, because:

To sum it up, there is not a fixed strategy for DEV and QAS systems and it will depend on the customer’s requirements.

As described previously, most effort and complexities can be found in the preparation of the conversion and in the first iteration. The first iteration is important to identify and solve problems and issues, document lesson learnt and also draft the cookbook for the cut-over

Additional iterations should focus on refining the conversion process, solving new incidents if there are, fine tune technically the process to minimize downtime and to set up the cut-over plan.

Remember that it is also very important to maintain the productive system as stable as you can, to avoid having a moving target or a “different” system every time a new conversion iteration is executed.

And last, as soon as you can, start to manage the downtime window with the business. 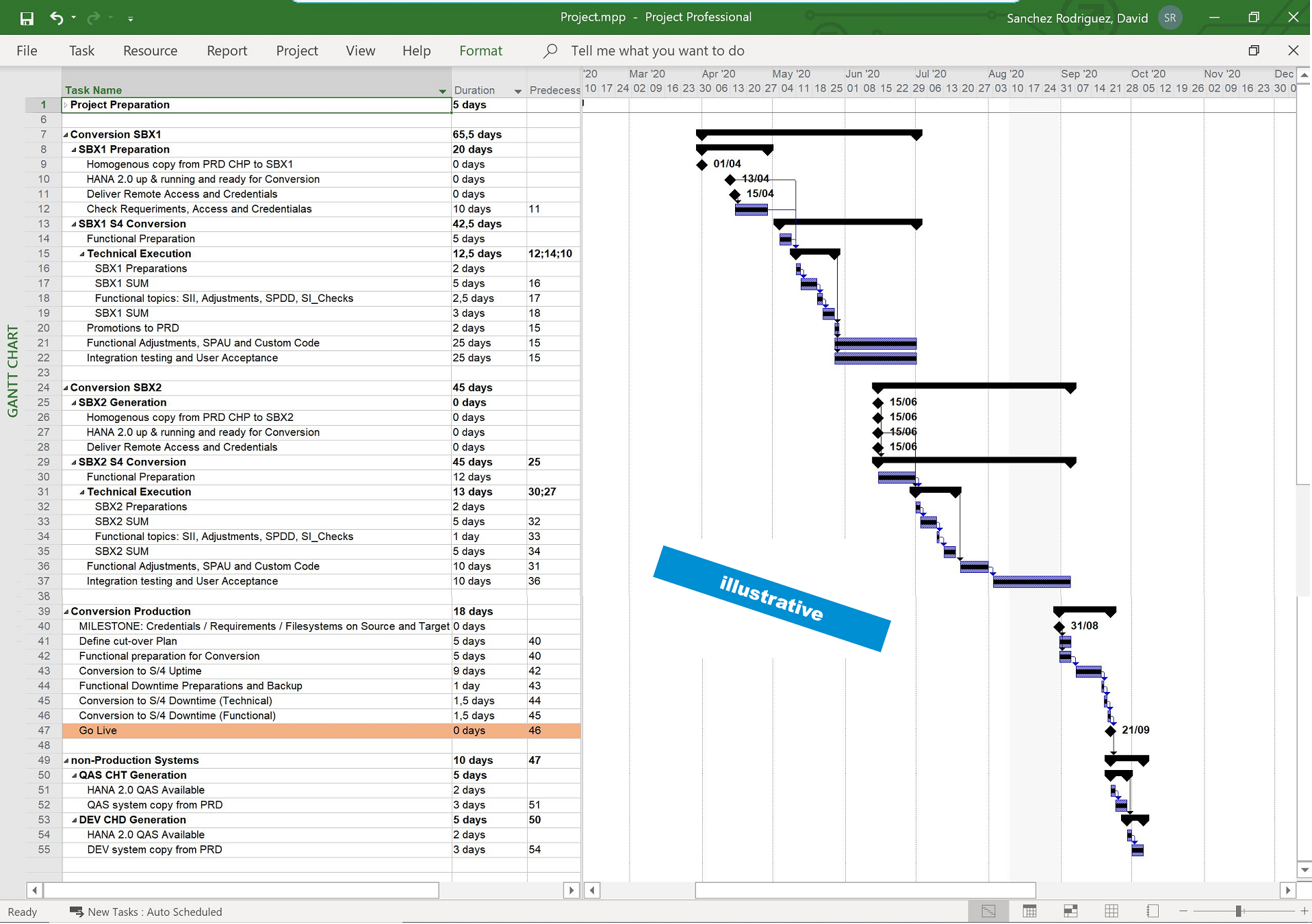 Thank you for sharing the knowledge, it will be very help full,

Thank you to you for taking the time to read it,

A great summary, enriched with your valuable experience! Thank you for posting, David!

Thanks David, for the posting. Your article will be very helpful for our journey of migrating from SOH to S4 HANA

Thanks for the feedback, that's the purpose!

This is great. Thank you for educating us

This is an awesome Blog. This will really be very useful in an S/4HANA conversion Project.

Thanks for the feedback 😉

Thank you, David. The details in blog helps in prep for conversion project.

Thanks, I hope it's helpful.

It is worth mentioning the effectiveness of focused build & Activate in S4hana migration projects.

Without focused build S4 migration can turn into a waterfall model which can be inefficient. Sticking to Activate methodology will significantly lower your Risk in S4 migration projects

Thank You. Very helpful blog for all SAP Project Managers.

Thanks for the feedback!

Thanks for sharing such pity effective & knowledgeable information ,with this blog lot of sap customer will get benefited conversation for S4 Hana,Thank once again for impressive information

I would like to ask if there is any possibility to have the project plan on the last page in mmp format ?

Thanks a lot for the feedback!