reCAP 2021, the community-driven (un)conference on the SAP cloud application programming model CAP, is a wrap!

What was once intended as a get-together of like-minded CAPers to mob-hack on CAP-related projects, has turned into the 2nd iteration of a global streaming event. Even though the shift to online was destined to change the nature of the conference…it didn’t! Just like 2020, all presenters shared vastly more source code than slides (if any at all!), hacking away live across the entire CAP palette – true unconference style!

Chapeau 🙇 and hats off 🎩 to the amazing line up consisting of

The live hacking of course resulted in a massive show-off of ’em local dev environments 😂. And it’s safe to conclude that VS Code and macOS were the go-to dev tools of the presenters. Not to speak of the various VS Code Themes…that we don’t want to judge here 😇.

Still, what united us all during the conference was the background image, designed by no other than Christian Braukmüller aka CBasis himself. Here it is for dowhateveryouwantwithit-plaisir (or download it from the reCAP Website): 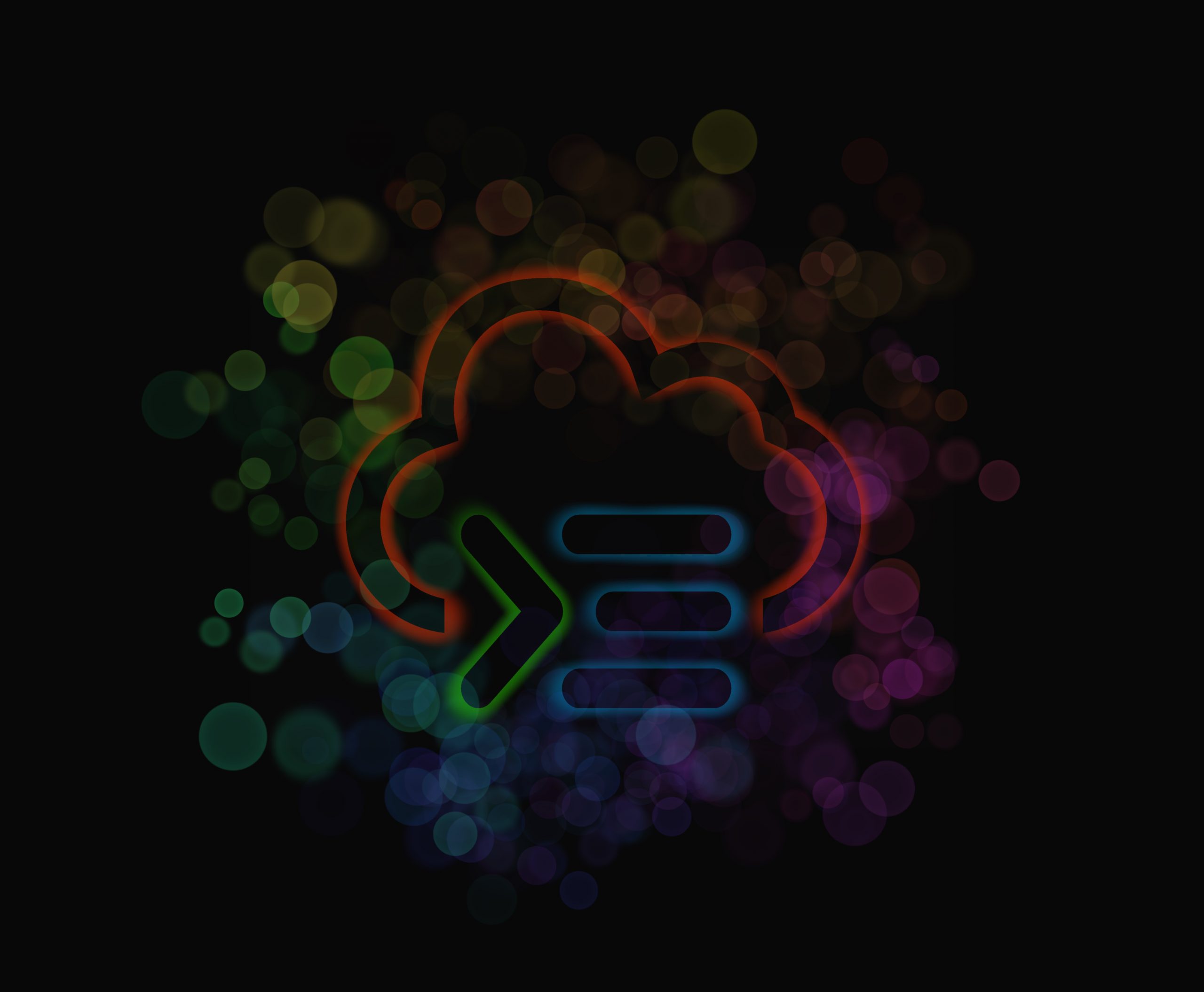 Speaking of showing things…many of you have probably seen the CAP inventor, Daniel J. Hutzel, for the first time ever during reCAP 2021. He actually shared his cam during his keynote! 😲 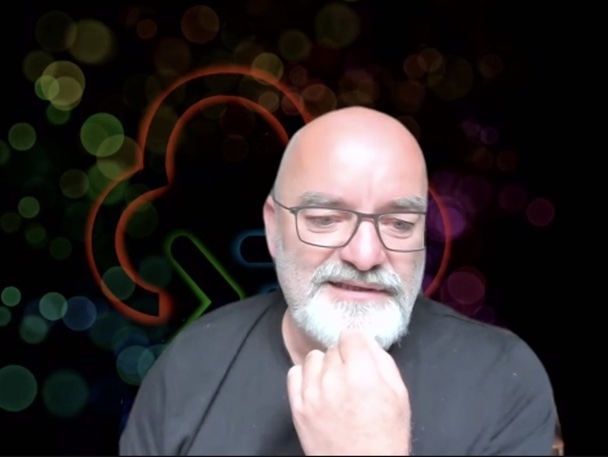 CAP inventor Daniel Hutzel. Yes, that is actually him.

And not only that, but he revealed his initals to be identical to those of SAP legend DJ Adams aka qmacro. Chance or Chiffre?!?

Talking about chiffres/numbers, a lot more people tuned into #reCAP2021 than last year. Indeed there were close to a 1000 unique visitors recorded by the broadcasting tool!

Additionally, we ran some polls amongst you viewers during the event that revealed some interesting results:

Also, not only the presenters deserve the hats-off for their live hacking, but also you -the reCAP audience!- were a truely interactive bunch! More than 350 chat messages were relayed during the broadcast and more than 60 questions asked towards presenters. (Most of them answered by CAP papa Daniel himself, morphing into the personification of a Q&A machine 🤘)

Last but not least, both the event sponsors (j&s-soft and Reply) and the core team behind organizing reCAP 2021 deserve kudos. Let me name them (other than me 😅) explicitly:

I’d like to specifially say that the cooperation between us for getting reCAP 2021 off the ground was remarkable in a way that could serve as a prime example of the term “cooperation” itself 🤗.

Let me close this blog post with two punchlines offered by two presenters that reflect both the versatility of CAP and the spirit of reCAP at the same time: 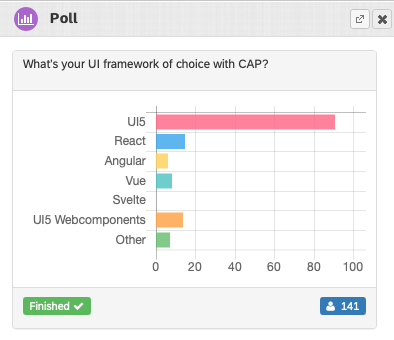 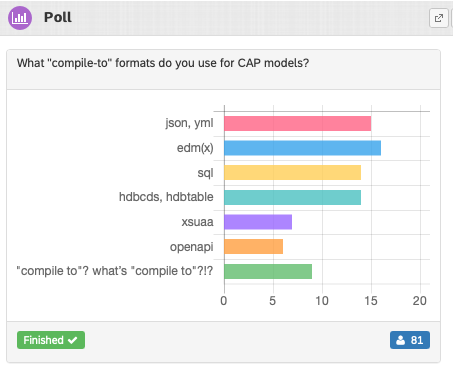 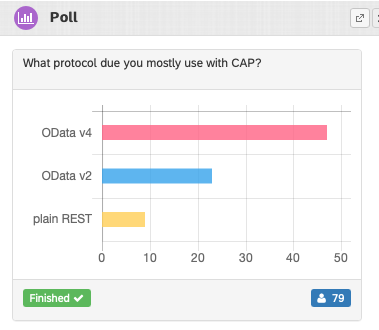 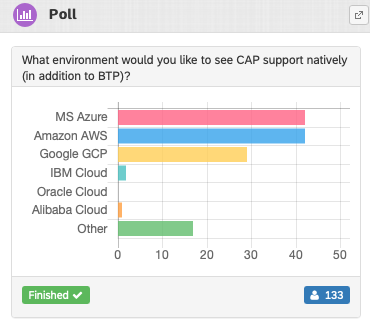 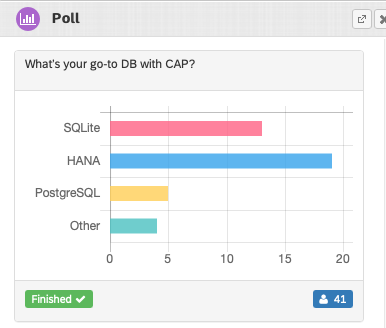 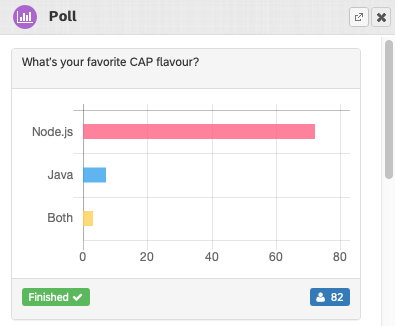 Many thanks for the organization Volker Buzek!

It was a great conference, thanks a lot for making this possible, it was an honour!

looking forward for the recording, as I had to miss the second half :/

pro-tip: in macOS (maybe in other OSes too) you can add keyboard shortcuts.

Great conference. Thanks for organizing it and next year I will be there in person! 🙂

It was an honor to be a part of it. Thank you very much for making this possible.

BTW:
For those who (have to) work on Windows: The WSL is a good solution to develop on Windows with Linux.

Same here - thanks a lot for the effort organising the conference and thanks for the opportunity to speak! Looking forward to next year.