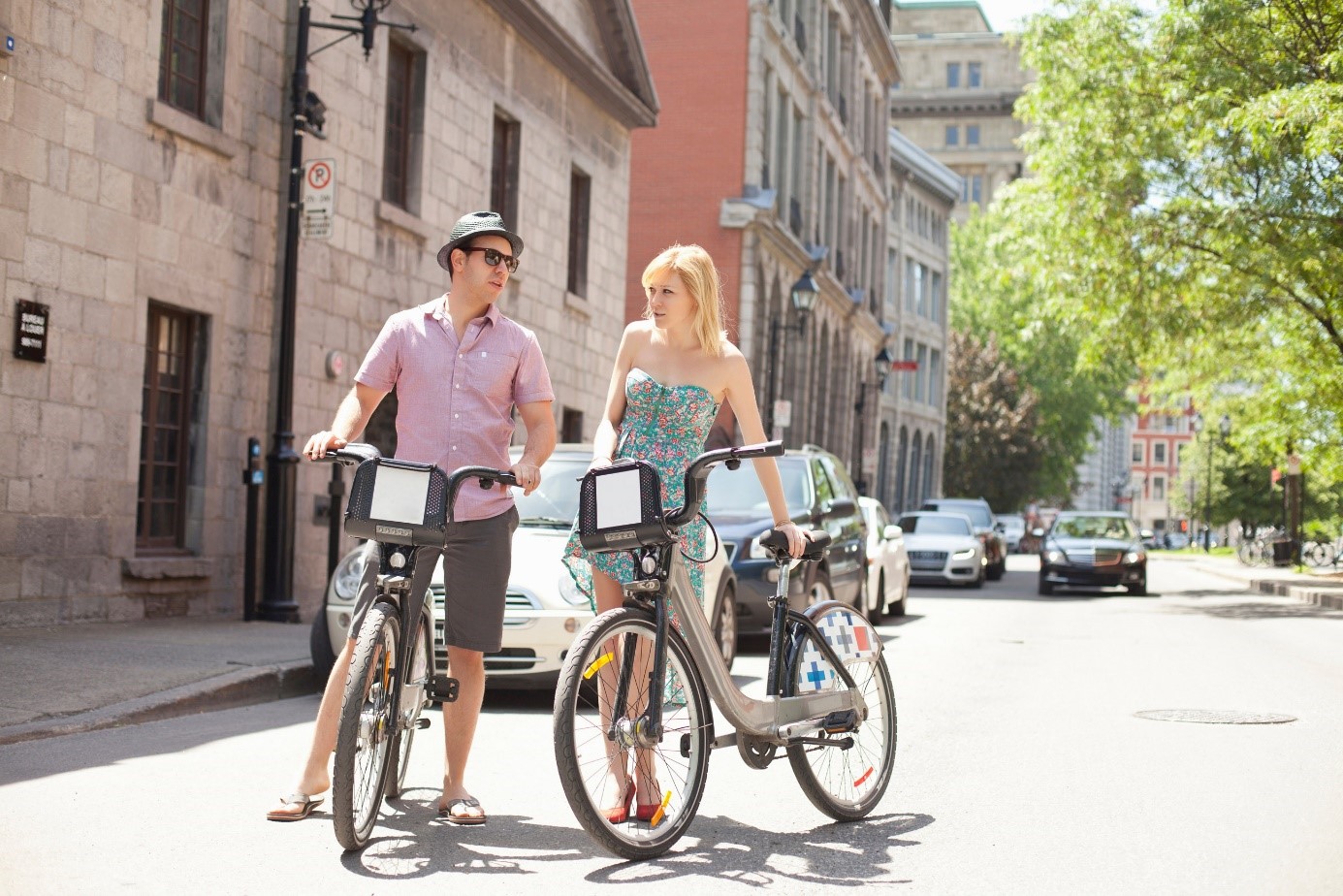 Time-series forecasting is primarily about finding temporal patterns in the evolution of a KPI to be predicted. Using these patterns, a predictive model can generate predicted values for the future. Does the value follow a trend? Does the predicted value tend to have lower value on some specific month (periodicity analysis)?

For some use cases, accurate predictions can be achieved by relying only on the past values of the KPI to be predicted (please refer to this blog post for a good example of such use case).

But sometimes, the value to be predicted doesn’t only depend on time but also is correlated to other external factors. Probably, the sales for my company’s products are correlated to some extent to the money my company spends in marketing and advertisement. Or the number of bikes hired in my city is correlated to the outside temperature.

In wave 2021.13 (2021 quarterly release 3), Predictive Planning introduces the influencers to the time-series forecasting models, allowing to take such factors into account. In this blog post I will show you how to use the influencers to get more insights from your data and possibly increase the accuracy of your predictive forecasts.

I am working for a company that is renting bikes in London. I have a planning model that contains a BikeHires measure that represents the count of hires each day as well as several measures related to the weather. Using Predictive Planning I would like to forecast the amount of bikes that will be hired for the coming 31 days.

In this scenario we will assume that the current day is July 31, 2015: this will allow us to compare the predictive forecasts to the values that really occurred in August 2015.

You can download this dataset if you want to recreate this example. Note that the columns BikeHires, Temp. Min, Temp. Max, Temp. Mean, Humid. Min, Humid. Max, Humid. Mean and Rain are expected to be measures. Other columns should be considered as dimensions.

You can refer to this blog post if you need help to create a planning model from a CSV file.

Let’s create a “baseline” predictive model that predicts the number of hires using no influencers. We will request 31 forecast points after July 31, 2015 and learn from one entire year of historical data.

To learn more about using Predictive Scenarios, please refer to this blog post. 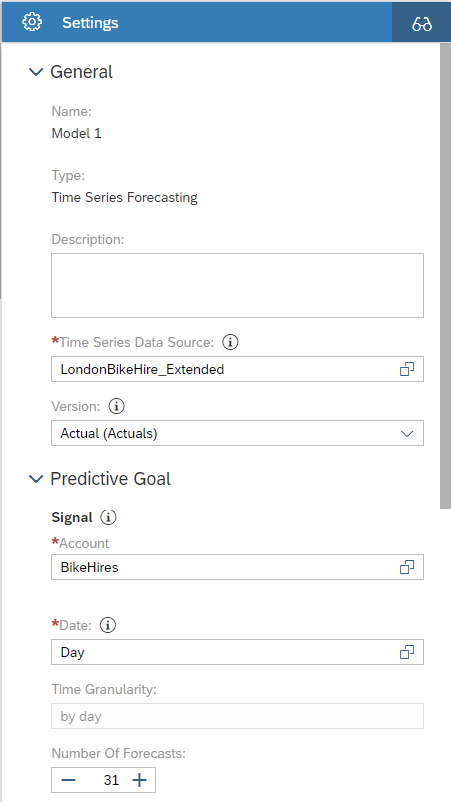 Request 31 forecast points (1 for each day in August) 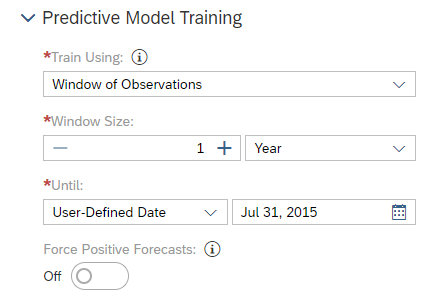 Configure a 1-year window of observation ending on July 31, 2015

Do not include any influencer for now

Once the predictive model is trained, we can note the following points in the Forecast modeling report:

Please note that you may get slightly different results depending on the evolutions of the predictive engine.

Looking at the Explanation report we can see that the predictive model has found both a trend and some periodical patterns in the time-series.

This shows that the amount of bike hires is for some part, explained by the time. But we could expect that weather-related factors such as the outside temperature or the quantity of rain to have an impact of the bike hires. Predictive Planning can detect such correlations thanks to the Influencers.

Using Influencers to Improve the Predictions

We want to keep the baseline model for reference and use the same settings for the improved predictive model, so let’s use the Duplicate feature.

Open the newly created predictive model and scroll down to the Influencers section of the settings.

Let’s validate our assumption about the outside temperature and the rain quantity having an influence on the bike hires by adding the following influencers and training the predictive model: 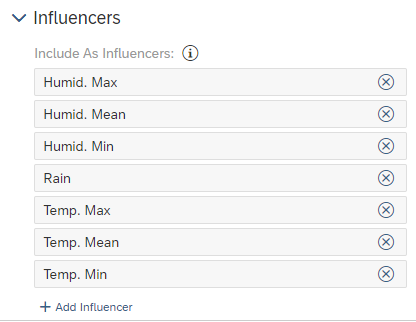 You can add up to 20 influencers to a time-series forecasting model. The influencers are numeric values of my planning models (accounts, measures…) that I think may help predicting the target

After the model is trained, in the forecast modeling report, we can note the following points.

So, the BikeHires time-series is better modelled on the training data partition but to get a sense of the “true” accuracy of the model, we need to look at the accuracy on the horizon period. Zooming in the Forecast Vs Actual visualization we can see that the Forecast series follows the Actual time-series more closely when the influencers are used: 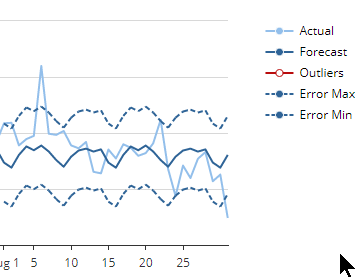 The predictions without influencers 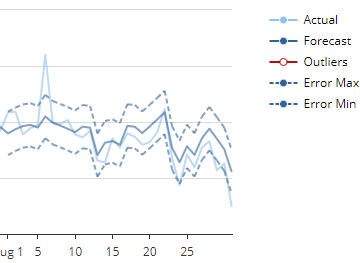 The predictions with influencers

We can see the relative contribution of the influencers in the Explanation report.

The time components (the trend, the cycles…), represented by the planning date (the Day dimension, here displayed as Day.Date because of a small glitch), contribute for 51.42% of the prediction. Then comes the maximum temperature that contributes for 29.89%, then the quantity of rain with 10.32%… So, as expected the quantity of rain, the maximum temperature and the mean humidity have a strong impact on the number of bikes hired (contributing together for 49% of the predicted value).

Using a Story to visualize BikeHire against the influencers, we can get more insights about the relation that exists between the influencers and the target. We can see that overall, the number of bike hires tends to increase when the outside temperature increases, while it tends to decrease when the humidity and the quantity of rain increase.

One thing to note is that some of the influencers we have selected in the settings (Humid. Min, Humid. Max…) don’t appear in the list. The Predictive Model keeps only the “useful” influencers. It evaluates how much additional performance each influencer would bring to the model and keeps only those that bring enough additional accuracy. So, it’s important to understand that it’s not possible to force an influencer to be used by the predictive model if that influencer doesn’t significantly increases the prediction accuracy.

Additional Considerations About the Influencers

The Influencers Must be Predictable

If a time-series forecasting model is created with some influencers but the values of the influencers are not provided for the prediction horizon, predictive planning will not generate the forecast and issue an error.

If Temp. Max and Rain have been selected as influencers, the following data won’t allow to get forecasts for August 2015 as the influencers have no value for the horizon period.

The data below will allow generating forecast for August 2015 as values for the influencers are available for the horizon period.

You also need to distinguish between influencers that are under you direct control and those that are not.

Using measures such as “advertisement budget”, “expenses budget” or “sales budget” is straightforward because you (or at least someone in your company) decide of their values and you can provide accurate values for the forecast horizon.

Using influencers such as gas or currency exchange rate, on the other hand, requires to be a little bit more careful. Such factors may have an impact on the KPI you want to predict but they are not under your control: there is no way for you to know their exact future values. If you want to leverage such influencers you should generate several sets of predictions based on different hypothesis for the influencers. For instance, you would generate forecasts for a “likely” hypothesis (using the expected future values for the influencers), an optimistic hypothesis and a pessimistic hypothesis

We will explain that in more details in a future blog post.

How to Identify Potential Influencers?

We tend to think about the outliers (or more generally any value not predicted as well as expected) as unpredictable events. When analyzing the report of a predictive model, spend some time looking at these “not so well predicted” points. Can you find a business reason for the actual not being as expected? You will find one more often than you think. In such cases you may have identified a measure that could be added to your planning model to be used to improve the accuracy of your predictions.

Be Parsimonious when Including Influencers

It may seem like adding to my model all the possible influencers is a clever idea to improve the predictions performance. But it’s not.

We recommend selecting the influencers carefully and not using too many of them simultaneously.

Using “too many” influencers may have negative modelling impacts: when using too many influencers, the predictive model may explain very well the past but may not be able to deliver the same performance on the future data.

There is no rule of thumb to determine the right number of influencers, but you should not try to get a perfect model. Keep in your predictive model the influencers that have a high impact on the accuracy and discard those that have a marginal impact. A good practice is to introduce the influencers one by one in the predictive model to check the impact on the HW-MAPE. It’s up to you to judge what is a marginal and a significant impact depending on you use case.

In this blog post, you learned how to leverage the Influencers to improve the accuracy of your predictive forecasts.

I hope this blog post was helpful to you. If you appreciated reading this, I’d be grateful if you left a comment to that effect, and don’t forget to like it as well. Thank you.

Do you want to learn more on Predictive Planning?

This feature is available from wave 2021.13. This will be part of the third quarterly release of SAP Analytics Cloud this year (August release).

Thanks for sharing insight with detailed information on the new release feature.

Predictions need to build trust so that users see the value and reliability of the prediction. This is a very nice use case that illustrates how influencers contribute to this.