This blog post will give more details about fiori version of 360 Reviews which is the latest version.

360 Degree Reviews helps organizations collect feedback on employee performance and behaviour from everyone, both inside and outside an organization. Quantitative and qualitative data from 360 Developmental Surveys & Multi-Rater Assessments can be collected and graphically displayed by various categories.

SAP SuccessFactors 360 Reviews enables you to combine self-feedback with anonymous input from colleagues and external sources to have the most comprehensive view of the performance of employees in your organization.

Below are the screenshot of the UI in the Fiori version.

Apart from the UI 360 Reviews – SAP Fiori Version have below mentioned features which are not available in the 360 Reviews v11 version.

When users are editing a 360 Reviews form using 360 Reviews – SAP Fiori Version, the system saves the form automatically after 5 seconds of inactivity.

This autosave feature works in all stages, views, and sections on a form, except in the following scenarios where your changes are immediately saved:

After a 360 Reviews form is completed, you can view its detailed 360 report, which provides both an overview and an in-depth look at employees’ ratings.

The Graphical Summary view is the default opening view of a detailed 360 report. It provides an overview of ratings broken down by individual raters and categories of raters along with comments given on the ratings.

This view includes the following areas:

The Overall Rating section (The counterpart in 360 Reviews – SAP Fiori Version is the Overview section.) displays an average rating by each category of raters and all raters. With specific configurations, the section can also display weighted sum rating of all raters, or of all raters except the employee. Minimum and maximum ratings are also available.

In the Competency and the Goal sections, average ratings of all raters and comments are displayed by sections and items. 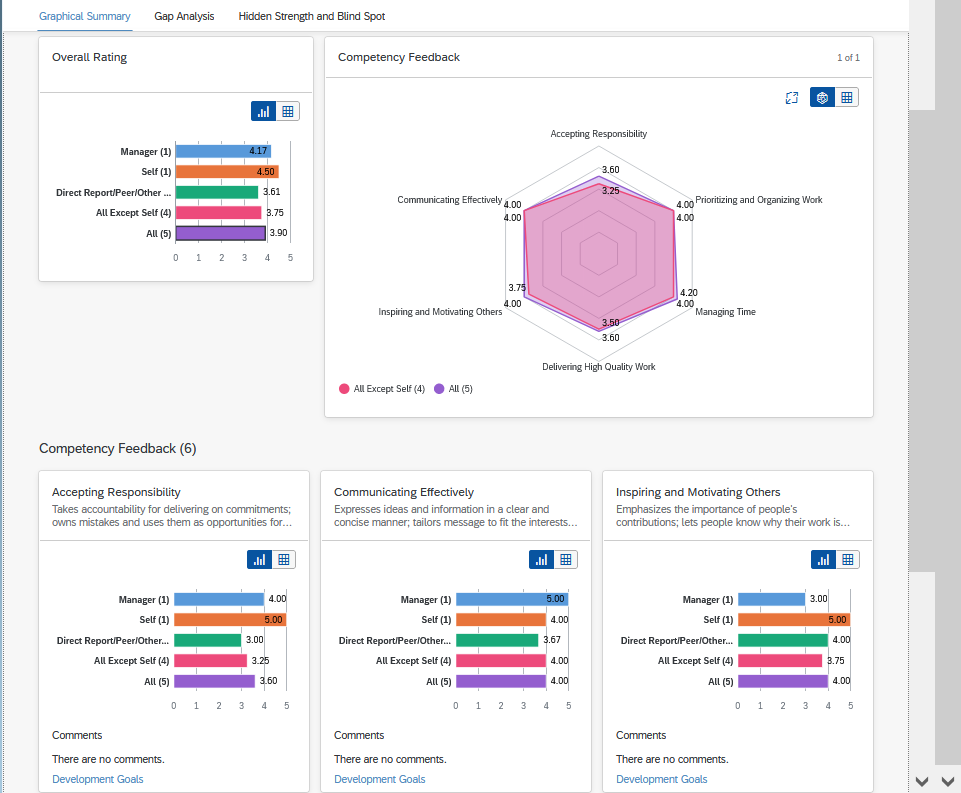 The Radar Chart will not appear in the Detailed 360 Report in the following scenarios:

If “Include the ability to rate” is not enabled (i.e. Competencies are not rateable in the 360 Review), then there will be no Radar Chart visible. 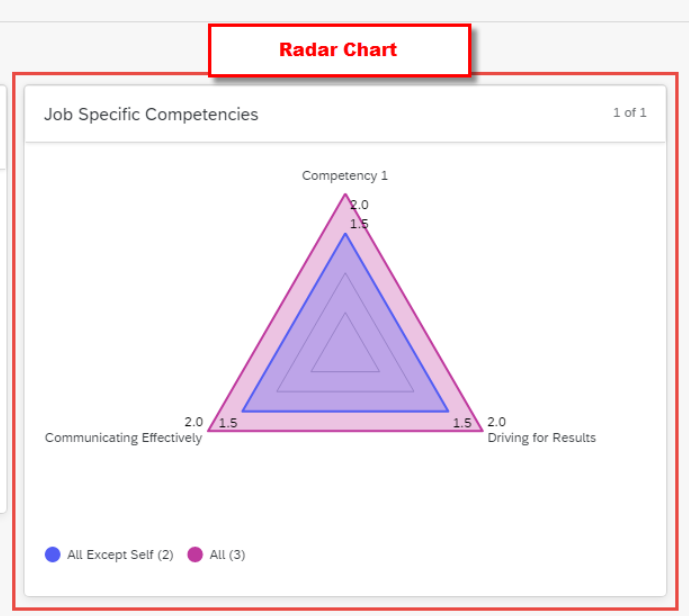 Rating point will display a pop-up of the result for that Competency. 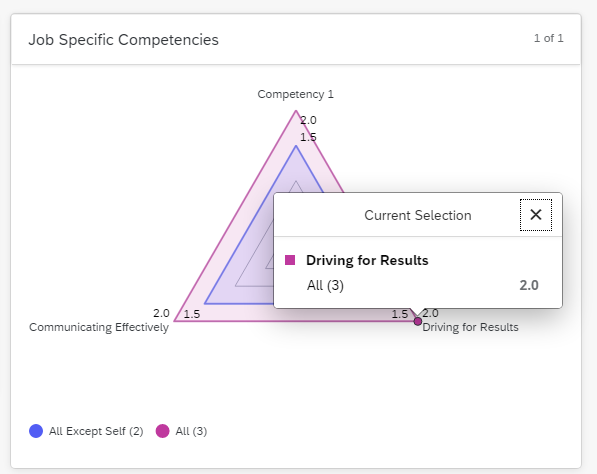 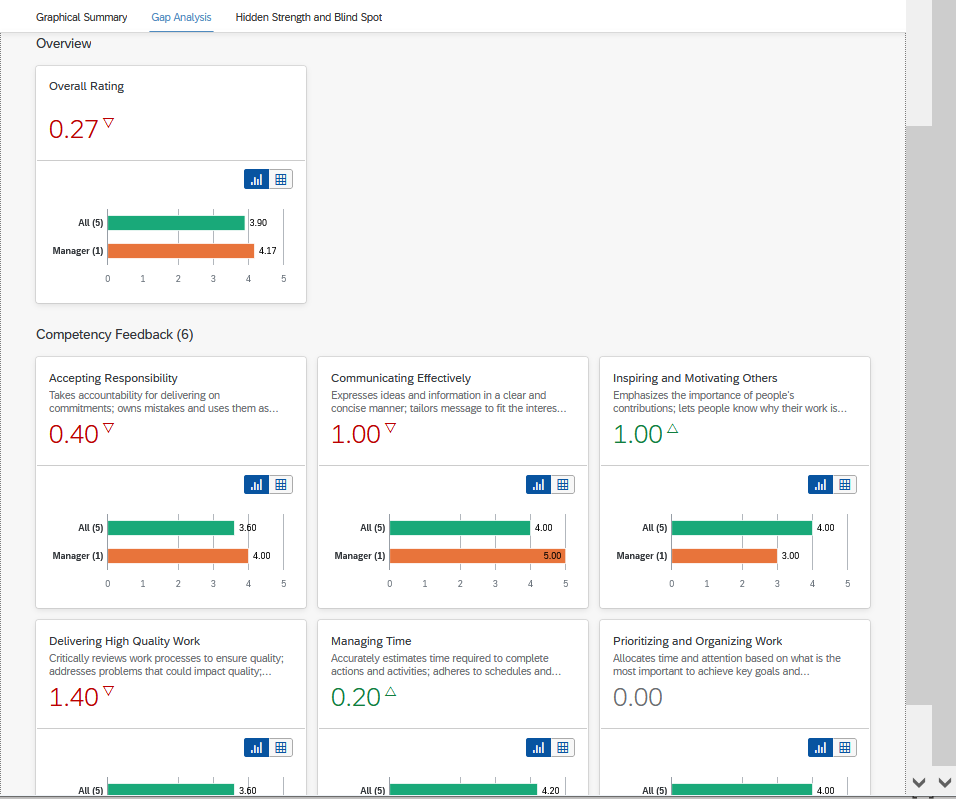 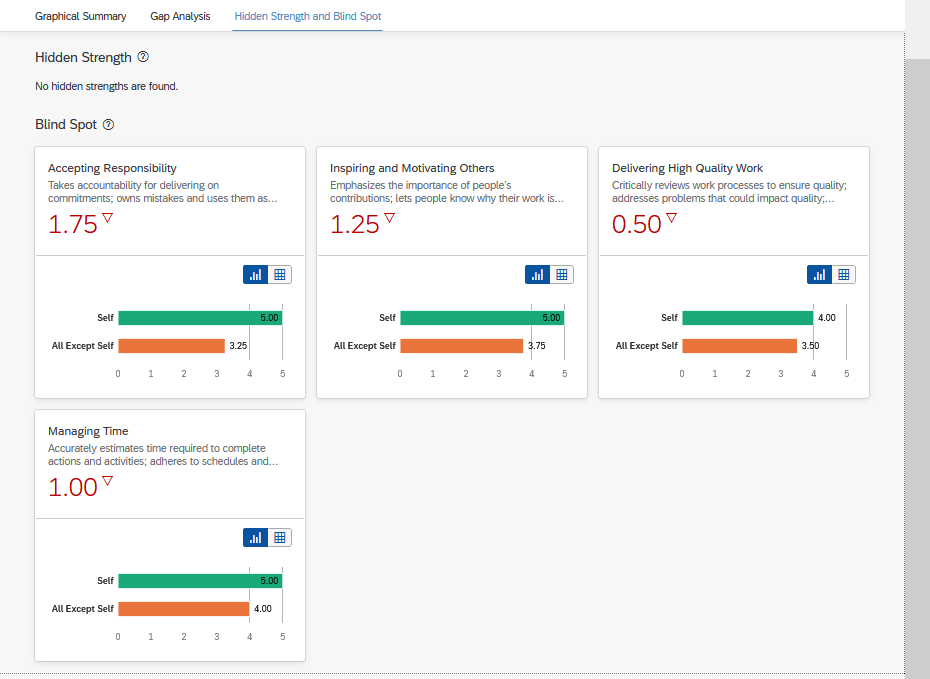 The attribute pdf-page-break-opt is supported on 360 Reviews forms of Fiori version. Admins can add the attribute to form template XML file by using the following values:

This Blog post is about 360 Fiori version features,apart from the older version of 360 Reviews.

Could you tell me hoe to configure the section can also display weighted sum rating of all raters of 360 forms，thank you!!!