You have some Python code that needs to run on a regular schedule? There are a number of options. Deployment on Cloud Foundry in the SAP Business Technology Platform can be interesting, particularly if the code does not do any heavy calculations. Other options could be Kyma (for scalability and granular control) or SAP Data Intelligence if your code is part of a broader data enrichment process.

Creating this blog was a team effort, together with Alex Dalentzas and Lester C Lobo. Thanks for inspiration and support go to Dimitrios Lyras and Remi ASTIER. 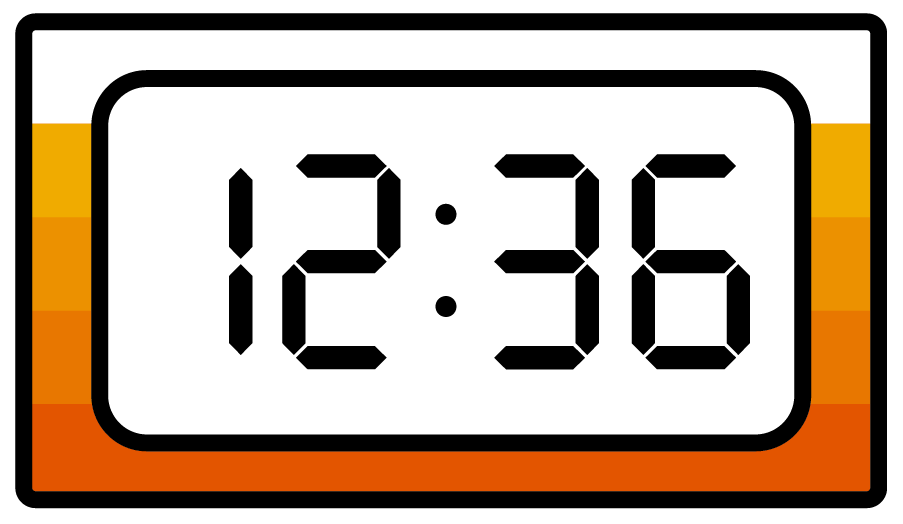 We would like to schedule a Python file, not a Jupyter Notebook. Hence use your preferred local Python IDE or editor to run this simple file, helloworld.py.

The only specialty of this code is that it is already able to detect, whether it is executed locally or in Cloud Foundry. This will be important later, for example when your code may need to securely access logon credentials for SAP HANA.

Now deploy this file on Cloud Foundry. If you haven’t worked with Cloud Foundry yet, the “Getting started” guide is a great resource. The free trial of the SAè Business Technology Platform is sufficient for the scheduling.

To run and schedule the file in Cloud Foundry, some further configuration is required. In the space of your Cloud Foundry Environment:

Now prepare the app to be pushed to Cloud Foundry. In your local folder, in which the file  helloworld.py is saved, create a file called runtime.txt that contains just this single line, which specifies the Python runtime environment Cloud Foundry should use.

Create another file called manifest.yml, with the following content. It specifies for example the name of the application, the memory limit for the app and it binds our new two services to the app.

Now push the app to Cloud Foundry. You require the Cloud Foundry Command Line Interface (CLI). In a command prompt, navigate to the folder that contains your local files (helloworld.py, manifest.yml, runtime.txt).

Login to Cloud Foundry, if you haven’t yet.

Then push the app to Cloud Foundry. The –task flag ensures for instance that the app is pushed and staged, but not started. Without this flag Cloud Foundry would believe that the app crashed after the Python code has executed and terminated. It would therefore constantly restart the app, which we don’t want in this case. In case your CLI  doesn’t recognise this flag, please ensure your CLI is at least on version 7.

Once pushed, the app is showing as “down”.

Now run the application once as a task, from the command line. You can chose your own name for this task, “taskfromcli” has no specific meaning.

Confirm that the code ran as expected, by looking into the application log, which should include the hello statement.

And indeed, the code correctly identified that it is was running in Cloud Foundry. After outputting the code, the task ended and the container was destroyed.

So far we triggered the task manually in Cloud Foundry through the Command Line Interface. Now lets create a schedule for it. In the SAP Business Technology Platform, find the instance of the Job Scheduling Service, that was created earlier. Open its dashboard.

On the “Tasks” menu create a new task as shown on the screenshot. 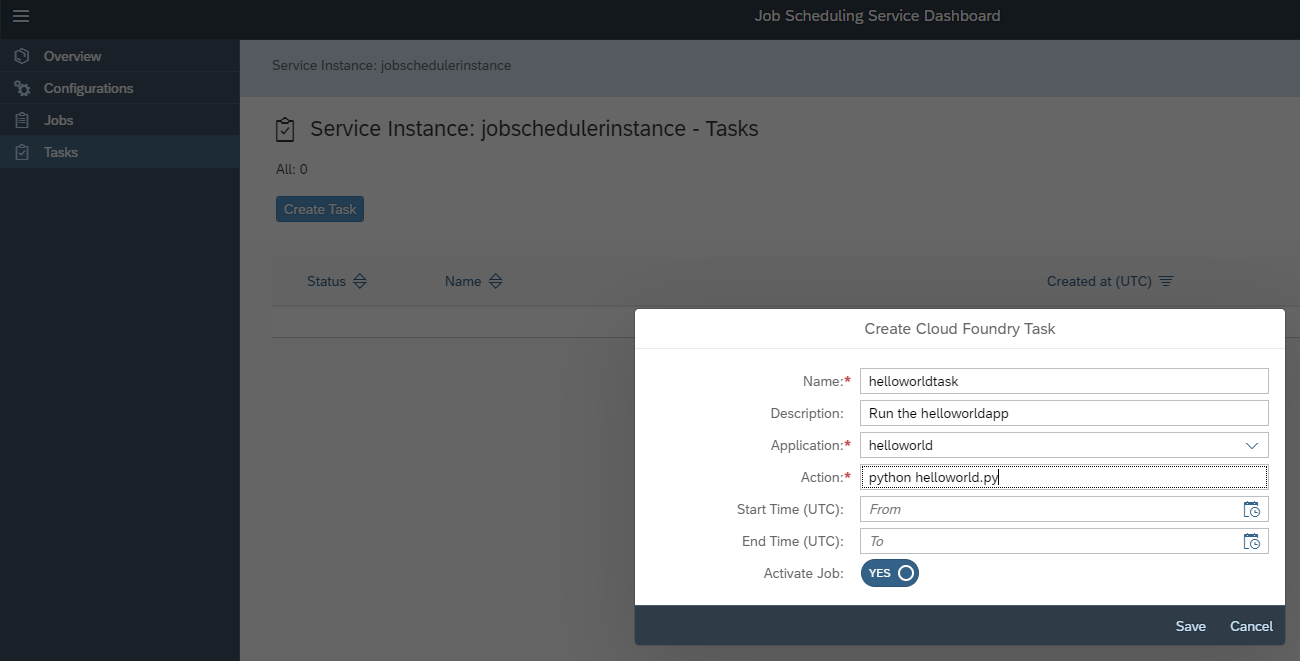 Open the newly created task and in the “Schedules” tab you can create the schedule we are after. In the screenshot the application is set to run every hour. In case you specify a certain time, note that: “SAP Job Scheduling service runs jobs in the UTC time zone“. 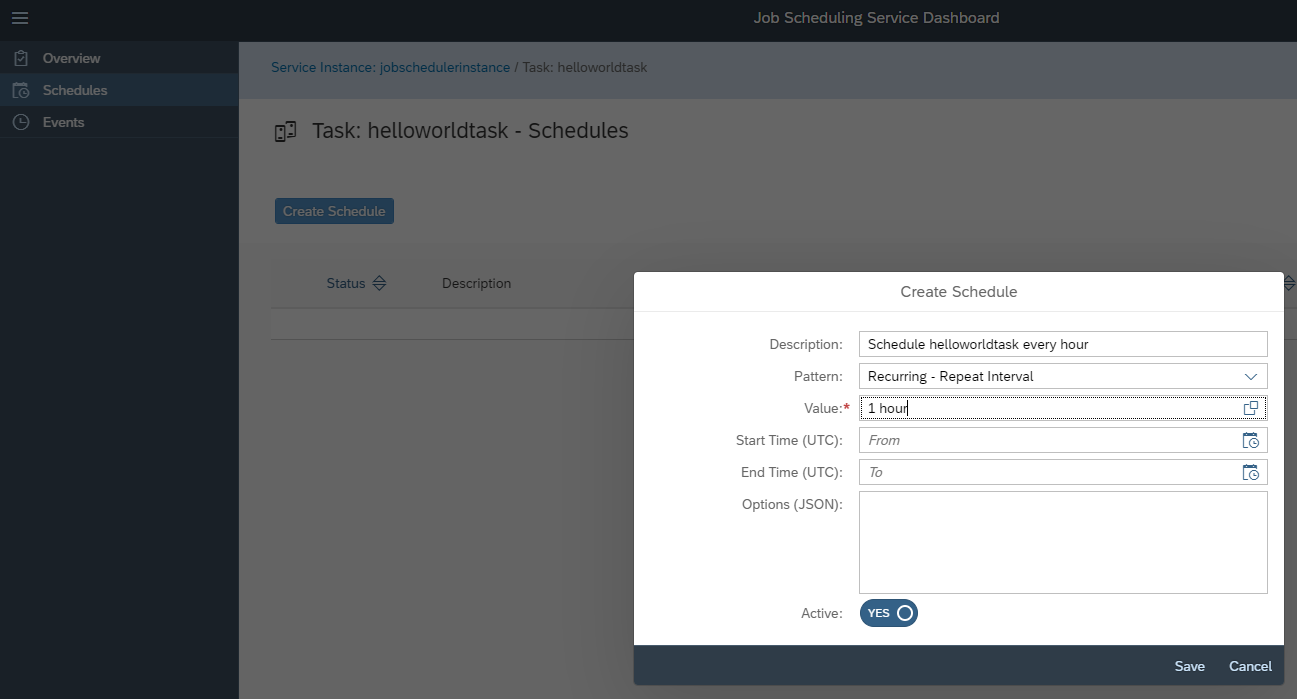 Click into the new schedule and on the left hand the “Run Log” shows the history of all runs.

You can also access the logs through the CLI as before.

With the understanding, how Python code can be scheduled in Cloud Foundry, let’s put this to good use. Imagine you have some master data in SAP HANA, with missing values in one column. You want to use SAP HANA’s Automated Predictive Library (APL) to estimate those missing values. All calculations will be done in SAP HANA. Cloud Foundry is just the trigger.

In this blog I will shorten the Machine Learning workflow to the most important steps. For this scenario:

Should you want to implement these steps, please check with your SAP Account Executive whether these steps are allowed by your SAP HANA license.

Begin by uploading this data about the prices of used vehicles to SAP HANA. Our model will predict the vehicle type, which is not known for all vehicles. This dataset was compiled by scraping offers on eBay and shared as “Ebay Used Car Sales Data” on Kaggle“.

Load that data into a SAP HANA table. The userkey is pointing to SAP HANA credentials that have been added to the hdbuserstore.

Before training the Machine Learning model, have a quick check of the data. 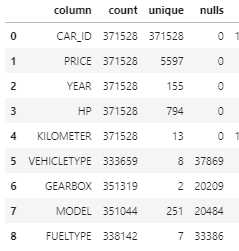 Focus on the cars for which the vehicle types are known. What are the different types and how often do they occur?

Limousines are most frequent, followed by “kleinwagen”, which is German for a smaller vehicle. Go ahead and train the Machine Learning model. This step will take a while, that’s definitely a chance for a coffee, or rather lunch. On my environment it took about 20 minutes.

Apply the trained model on the test data and evaluate the model quality with a confusion matrix. 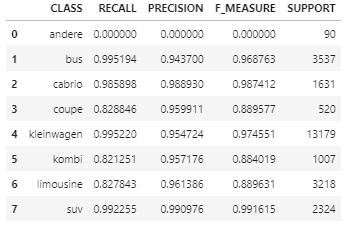 Save the trained model in SAP HANA, where the scheduled process can pick it up later.

Schedule the apply of the Machine Learning model

To trigger the application of the trained model, follow the same steps as before when the helloworld app was deployed. You require 4 files all together. Place these in a separate local folder on your local environment.

This file uses the same logic of the earlier helloworld.py to identify whether it is executed locally or in Cloud Foundry. Depending on the environment it is retrieving the SAP HANA logon credentials either from the local hdbuserstore or from a user-defined variable in Cloud Foundry. The trained machine learning model is then used to predict the missing values. The strongest predictions are saved in the VEHICLTETYPE_ESTIMATED table in SAP HANA. Again, no data ever leaves SAP HANA.

Run the file locally and you should see an update that the process completed successfully. 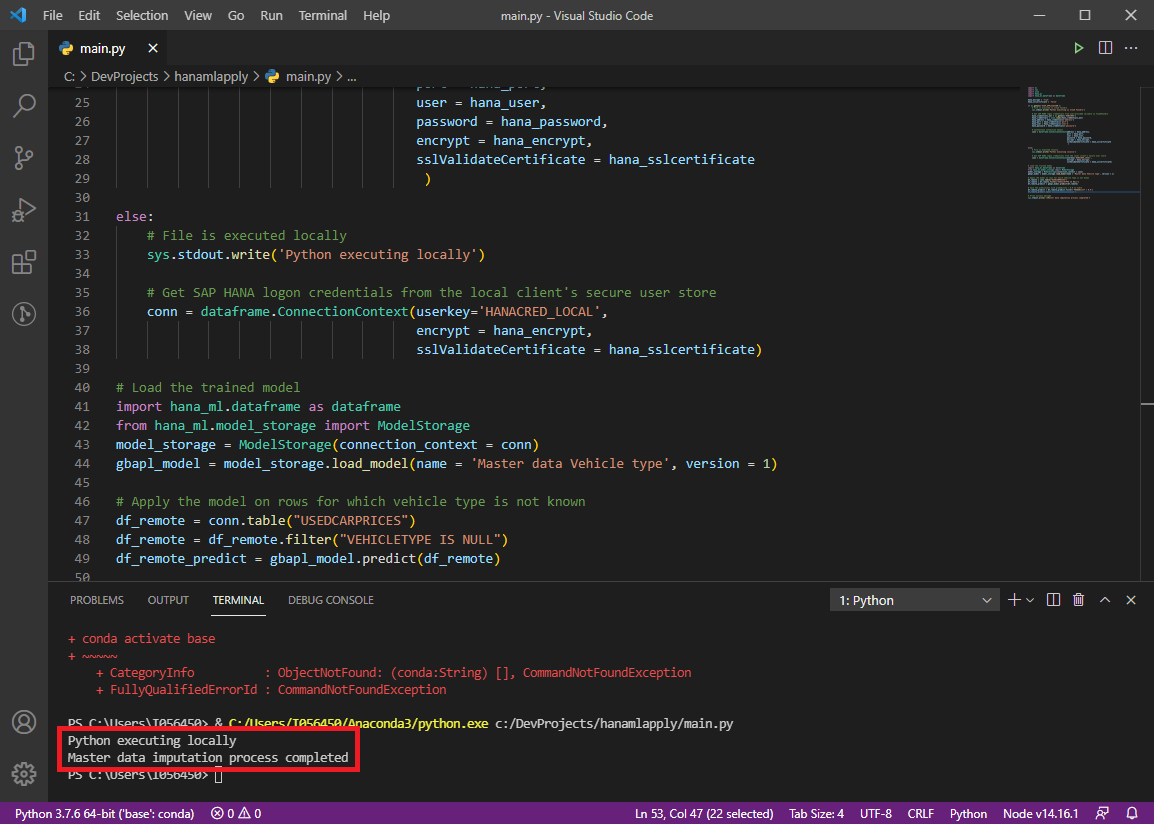 Before pushing this application to Cloud Foundry, you must create the remaining 3 files in the same folder.

No surprises here, along the same lines as before.

This file is new. It instructs the Python environment in Cloud Foundry to install the hana_ml library.

From your local command line push the app to Cloud Foundry.

Before running the app, store the SAP HANA logon credentials in a user-defined variable in Cloud Foundry. The name of the  variable (here “HANACRED”) has to match with the name used in the above main.py. Port 443 is the port of SAP HANA Cloud. If you are using the CLI on Windows, the following syntax should work. If you are on a Mac, you might need to put double quotes around the JSON parameter.

From here, it’s exactly the same steps as before. Run the task from the CLI if you like.

And indeed, the task completed successfully. The SAP HANA logon credentials were used to apply the trained model, to predict the missing data and to save the strongest predictions into the target table.

Back in the SAP Business Technology Platform, go to the Job Scheduling’s Service’s Dashboard and create a task for the hanamlapply app. 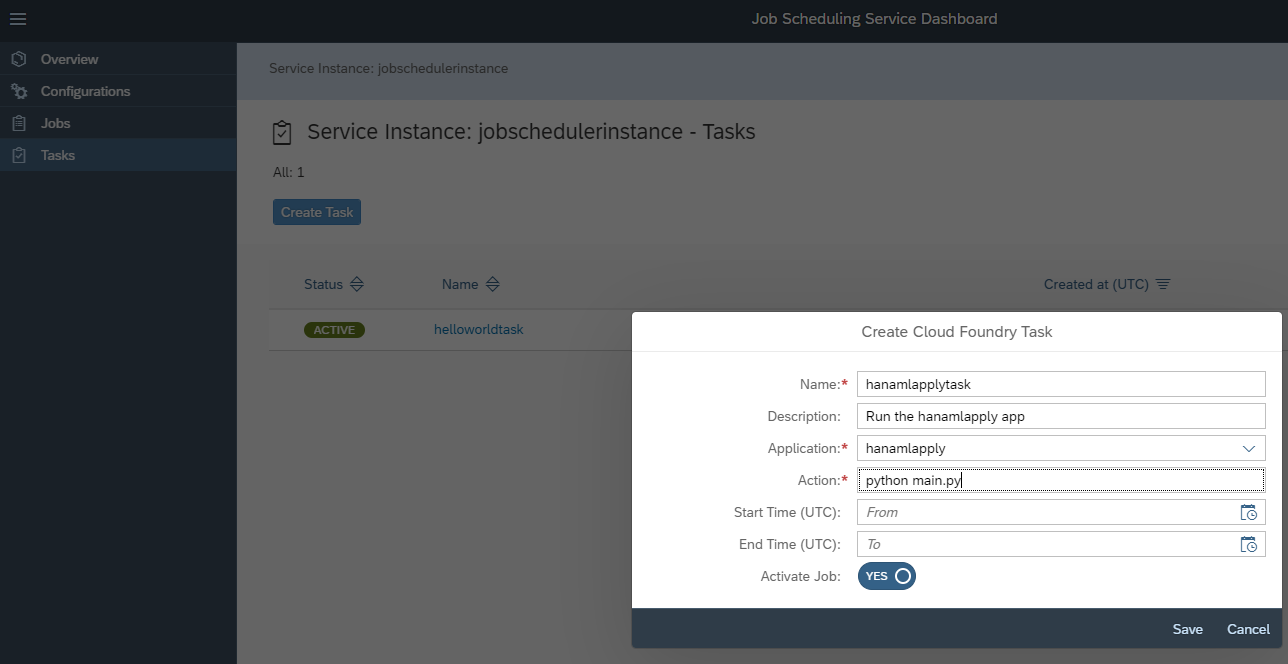 Create a schedule, lean back and the model is applied automatically!

If your Python code is running for longer than 30 minutes, you can adjust the Timeout in the Job Scheduling Service Dashboard accordingly.

thank you for describing this cool scenario !