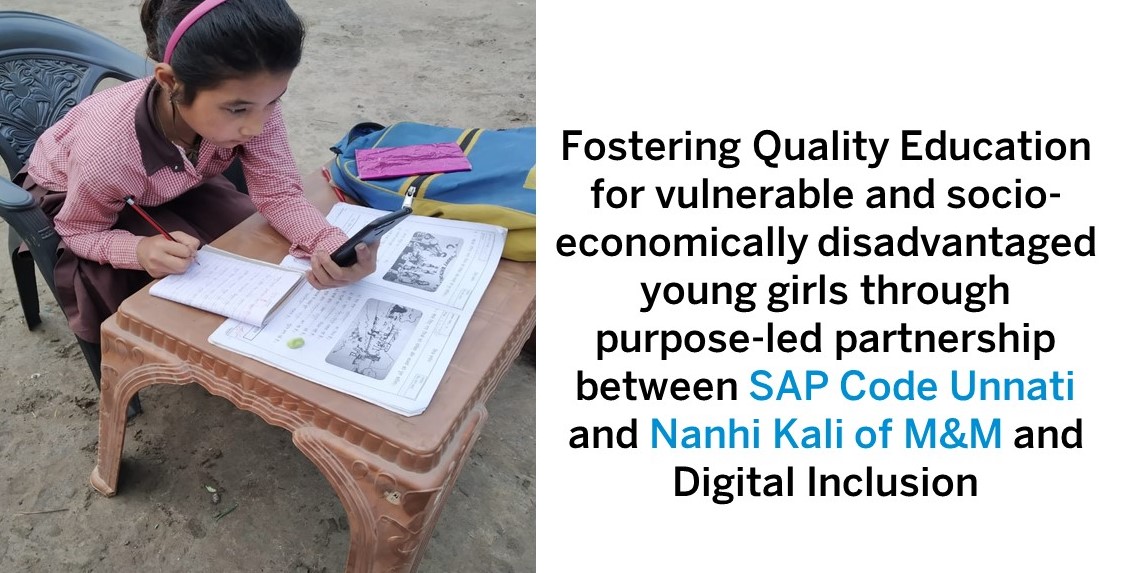 Despite hailing from different parts of the country, Sapna (Shravasti, U.P.), Naziya (Raichur, Karnataka), and Srijana (Darjeeling, W.B.) share a very similar and resilient backgrounds. They all belong to vulnerable and socio-economically deprived societies where poverty and struggle to meet both ends meet is a daily battle to fight against. Sapna’s father worked as a labourer in a private company which shut down due to the pandemic; her mother is a homemaker with no source of income. With a monthly family income of as low as Rs. 2,000, her parents could not afford to spend any money on her education and study material. When the world is hit by a pandemic and economic opportunities shrinking, every penny invested in the way of a girl child becomes the immediate choice for concession.

Yet, all the girls, Nanhi Kalis (little buds), share something very interesting in common. SAP in India partners with Project Nanhi Kali of Mahindra & Mahindra, and aims to train 12,500+ young vulnerable & socio-economically disadvantaged girls from rural India through Digital Inclusion

Why Invest in Girl’s Education?

Education is a fundamental right of every child and is critical for improving the human condition. However, gender inequalities across India remain deeply entrenched in communities, with women facing numerous social barriers that limit their access not only to education but also skilling and jobs.[1] Anita, Nanhi Kali from UP, has a supportive father, but her grandparents don’t favour her education. She could go to school till the time her father was around, but her grandparents dropped her out of school soon after her father left for Punjab to find work. Rural parents in poor households refrain from making any monetary investment in girl’s education. Even where school fees are not charged, parents incur some expenditure for school uniforms, text and exercise books, and stationeries[2]. Hence, most of the girls are left with either going to government schools or not going to schools at all. Gender discrimination, patriarchal mindsets and regressive socio-cultural practices contribute to low female literacy levels of 65% nationally and 46% in rural India[3].

Further, school closures caused by COVID-19 have worsened the pre-existing gender disparities in education, having a disproportionally negative impact on girls from vulnerable families. Some girls might even never return to school because they are either forced to work, take up care giving responsibilities, or even worse, marry early[4]. With only 27% of Indian households having internet access[5], the digital divide renders marginalized girls with no means to learn remotely.

The imperative of purpose-led partnership between SAP and M&M transcends beyond business, towards inclusive & equitable education for girls. Nanhi Kali, sponsored by M&M – Code Unnati, spearheaded by SAP, is one such collaboration that helps girl students to be digitally ready and empower them to bring about a positive change in the economy by preparing them for the digital shift in the society.

Khushi, like most of the students, is a first-generation learner. She fails to seek assistance at home in understanding her lessons which lead to her lack of interest towards studies. She did not like attending school initially. The project, thus, provides nanhi kalis with an after-school academic support class through Academic Support Centres which are set up within government school premises. The PPP with the government schools is a good example of scale-up and co-innovation by utilising the existing infrastructure (school buildings) for creating meaningful social impact. The mutual resource-sharing yields high scope of support from the partnership with on-ground monitoring of the program with the help of shared human-resources. Code Unnati – Nanhi Kali collaboration also keeps check on girls’ attendance and thereby precluding any possible attempts of child-trafficking in border areas.

All 12,500+ nanhi kalis, like Khushi, Amina, Sapna, Anita, Naziya, and Srijana, enjoy learning on the digital tablets as they had never seen or used a tablet before. The AI powered pre-loaded software on tablets enable girls to learn English and Maths in their local languages even in regions with poor connectivity. By integrating digital literacy in primary to high school curricula and training youth in next-generation technology, the project partnership enables them to be future-ready. Driven by technology, the partnership is spearheading the issue of gender inequality during Covid-19 crisis.

The project partnership aligns with and contributes towards the UN SDGs 4 (No Poverty), 5 (Quality Education), 8 (Decent Work & Economic Growth), and 17 (Partnership for achieving the goals). India has a significant opportunity to boost the economy by advancing gender parity. Amongst all Asia Pacific countries, it is India that would reap the largest benefits from advancing women’s equality, with the potential to achieve an 18 percent increase over business-as-usual GDP.[1] In order to bring the girls from underprivileged sections of the society under the folds of digital education, there is a need for stakeholders from policy, government, businesses, digital solution providers, community-based organisations, and funders, to come together and discuss pathways to collaboration for sustained outcomes. There is a need to make women’s education a high priority matter and devote a good deal of their resources and energies to it.