The pandemic that broke in 2020 March, disrupted a lot of businesses across globe resulting in a huge change in the behavior of the KPIs (key performance indicators) measured. For example, the revenue generated by the airline companies dropped down while the e-commerce grew faster than ever.

Since the 2021.Q1 quarterly release we improved the way a Predictive Scenario analyzes time series data. Our goal is to provide relevant and accurate predictive forecasts including when there are disruptions. Our first improvement (2021.Q1 QRC), was to leverage the most recent data to reduce the effect of the disruption. In our roadmap, you can also see other improvements such as the detection of change points and the introduction of piece-wise trend. In this article, I am describing how we included a new class of algorithm named exponential smoothing in our automated time series forecasting technique. This feature is now available in 2021.Q2 QRC release for Smart Predict and Predictive Planning.

Exponential Smoothing technique was introduced to adapt to significant and recent changes made in the data. Using smoothing factors gives more weight to recent data. It is exactly what we expect with the disruptive data mentioned above.

The implementation of Exponential Smoothing inside a Predictive Scenario is optimized to:

Now it will be good to see exponential smoothing in action inside a time series forecasting scenario. To explain this, I have used an example related to the evolution of the price of houses in Dallas . I collected the historical data on a monthly basis since 2006 to forecast the 2021 prices.

I created a time series forecasting Predictive Scenario and requested twelve forecasts. The Horizon-Wide MAPE (Mean Absolute Percentage Error) of the predictive model was found to be 3.10%. This means that the model is making is less errors. Predictive forecasts are shown in the figure below. 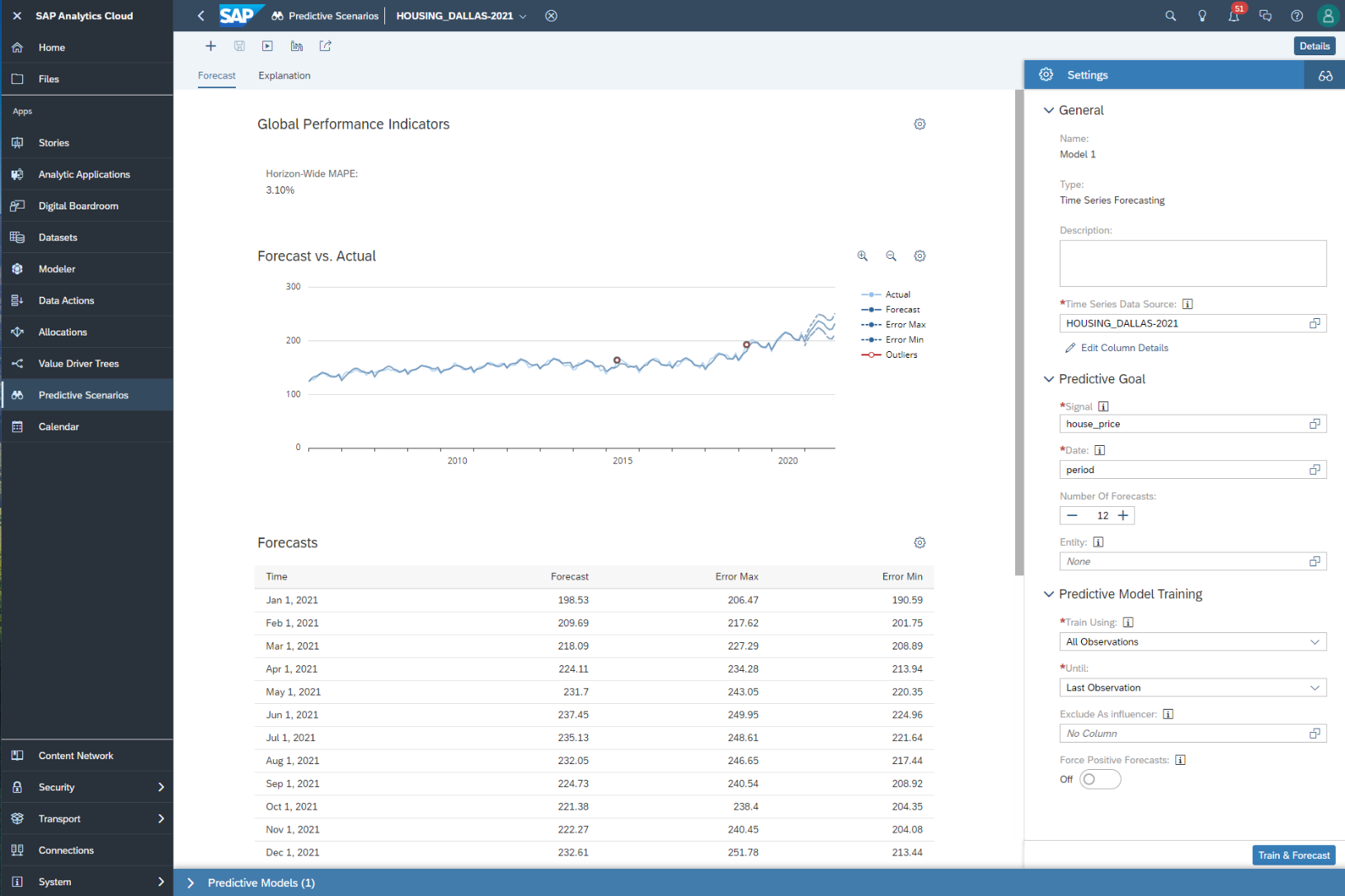 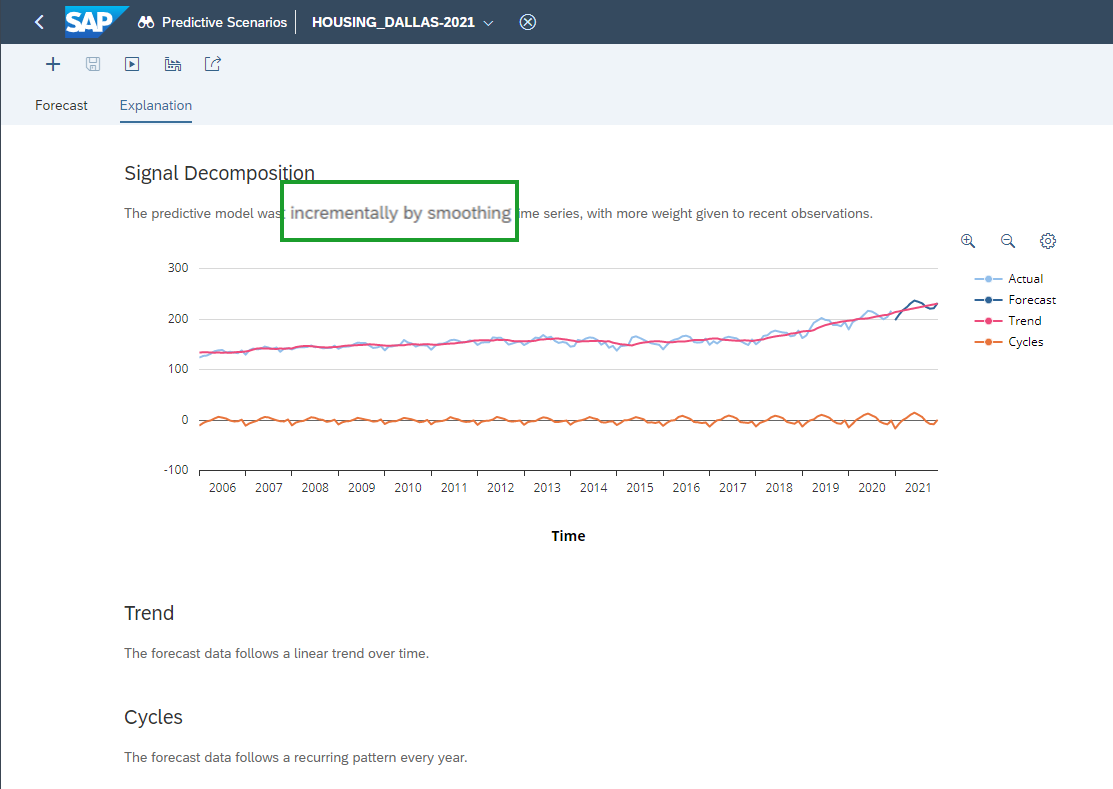 Fig 2: Predictive model based on an exponential smoothing technique

Predictive scenarios combine transparent results with accurate models. Trustworthy, self-explained forecasts are presented to the SAP Analytics Cloud users so that they can understand the predictive forecasts easily and take relevant actions and decisions for their business.

The dataset of this examples is available here.

In this blog, I am just giving an overview explanation of Exponential Smoothing as there are already a lot of papers explaining detailed descriptions. You can find such references at the end. This blog is mostly to explain the principle with simple formulas.

Usually, three types of exponential smoothing techniques are being used: simple, double, and triple. Let me explain their principle.

If there is no prediction for the first data of the time series measured at t0, we assume that the predictive forecast at t0 (noted F0) is equal to the actual value at t0 (noted A0).

Using the above statement, the initial condition can be written as:

The formula of the simple exponential smoothing is described as shown below:

If we factorize on the predictive forecast at time t-1, we get the following formula:

The previous formula provides the explanation of the term “exponential” in this technique. If we replace the predictive forecast at time t-1 by its value in the formula, we obtain the following formula:

If we continue these substitutions, at the end this formula we obtain:

And because the weight of the actual data decreases following an exponential function, the term “exponential” appears in the name of the technique.

One limitation with the simple exponential smoothing is that it does not provide reliable results when there is a trend in the historical data. The predictive forecasts are either underestimated or overestimated depending on the slope of the trend. The goal of the double exponential smoothing is to smooth this trend to minimize the effect on the predictive forecasts.

Here, we use the same initial assumption: F0 = A0

Consider that the predictive forecast has two components:

With this notation, we can write:

where h is the number of forecasts requested in the future (it is the horizon).

The level and the slope at time t are given by these formulas:

α and β are smoothing factors whose value is between 0 and 1.

To compute level and slope, it is necessary to add a new assumption which is:

To be consistent with the existing terminology used in the Explanation panel of a Predictive Scenario, the component shown is a trend. Its definition in the context of exponential smoothing is a linear combination of Slope at time t and Level.

Consider that the predictive model has three components:

With this notation, we can write:

• M is a seasonality parameter that stands for the size of a cycle (number of historical data in a cycle). Here, we try various seasonalities such as every day, every month, and every quarter. Refer to the online help to get the complete list.

The level, the slope, and the cycle at time t are given by these formulas:

α, β, and δ are smoothing factors whose value is between 0 and 1.

To conclude this section, the Excel file “Exponential Smoothing Calculations.xlsx” is provided for your reference that shows examples of these three exponential smoothing methods. You can see the following:

Integration of Exponential Smoothing in a Predictive Scenario

In a Predictive Scenario, time series data can come from either a planning model or from a dataset. This blog explains how historical data is analyzed, prior to the introduction of exponential smoothing technique.

The Predictive Scenario builds combinations of these simple predictive models. These combinations are evaluated against the validation dataset to determine the one which gives the best accuracy.

Finally, the best combination is refitted and adjusted on the complete historical dataset to consider the most recent data.

This process is kept with exponential smoothing technique.

We make these two techniques compete to best adapt to the shape of the time series. If there are disruptions in the data, we might get better results with exponential smoothing.

Predictive scenarios are constantly evolved to bring you the best combination of accuracy, trust, and simplicity, as illustrated by the delivery of this new feature in 2021.Q2 QRC. This means that SAP Analytics Cloud Business Intelligence (BI) and Planning users benefit transparency of this feature to get the best accurate and relevant predictive forecasts and explanations. I hope this serves your business needs in disrupted times.

If you appreciated reading this blog, I would be grateful if you can like, share, and provide your comments. Thank you.

Thanks Thierry for again an excellent blog! The feature is now available to all SAP Analytics Cloud tenants - the second quarterly release was rolled-out over the week-end.