This blog describes how to configure the new Poll Enrich pattern in combination with the sftp adapter, elaborating on use cases and different configuration options.

Use Poll Enrich with SFTP Adapter

In general, there are three main use cases for the Poll Enrich pattern:

In this blog, I will focus on the second and third use case. Yet, I will shortly also mention the configuration option for the first use case when discussing the integration flow configuration.

This is the simple integration flow we are going to build:

The flow starts with a HTTP inbound adapter that triggers the message processing. In a subsequent Content Modifier, some properties are defined that are used dynamically in the sftp adapter when polling the file from sftp server. At the very end, the message is sent out to the receiver system.

In the integration flow, draw a connection from the Sender participant to the Start Message event and select the HTTP adapter; then add a Content Modifier next to it. Configure the HTTP adapter as you like.

For my simple scenario, I define the following properties to set them dynamically via XPath from the incoming http request:

Next to the Content Modifier, configure the Poll Enrich step. For this, in the Call section of the modeler, select External Call and then Poll Enrich. 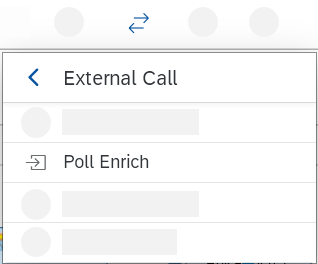 The aggregation is configured with the help of the Aggregation Algorithm in the Poll Enrich step: 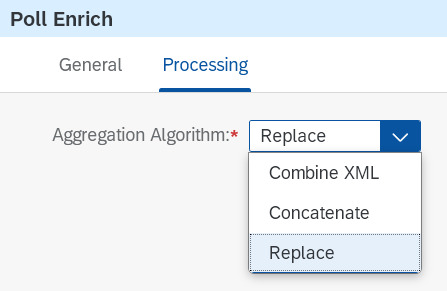 For our use case (to simply read files via external trigger or via dynamic configuration in the sftp adapter), the Replace option is the correct choice. This algorithm simply replaces the original message (payload and headers) before the Poll Enrich step with the new one fetched from the sftp server.

If you want to enrich your original payload (use case 1), you have to select one of the other two algorithms:

If you want to get an exception in case no message is found on the sftp server you can select the checkbox Throw Exception if no Message Found. If not selected, the header SAP_PollEnrichMessageFound is set to false if no message can be found during processing. Based on the header you can configure alternative processing.

The configuration of the SFTP adapter will look familiar to you because it contains almost the same configuration options as the normal SFTP sender adapter. Some configurations, like the Scheduler tab, are missing because they are not relevant in this pattern, but most settings are equal.

In the configuration we specify the properties defined in the Content Modifier: As a final step, configure a connection to the Receiver participant to send the message out.

Deploy the flow and trigger it with a payload that provides the necessary data; in my example, I use the following simple payload:

Note that in case no file can be found on the sftp server, the processing continues with the payload before the Poll Enrich step. It is planned to offer specific handling in such a case.

I hope this simple scenario helps you to understand the Poll Enrich pattern.

this is a dream feature we waited from 4 years, thank you very much, could you ask to your developer to add on Process the option None, a lot of time we just need to read files without variation of timestamp and position.

We tried some workaround like   take file move on processing folder and at end on workflow put it bak on sftp original folder.

Destination folder doesn't accept properties, headers like parameter and if you put  .  instead .archive  it doesn't work, files disappears on void :).

Thank you and good job!

thank you for your nice feedback.

Concerning option None you mean to simply keep the file and process it again with the next poll? This will come with the next update, it will be called 'Keep File and Process Again'. Note that you need to recreate the sftp channel to get the new version of the polling sftp sender adapter to get this feature. 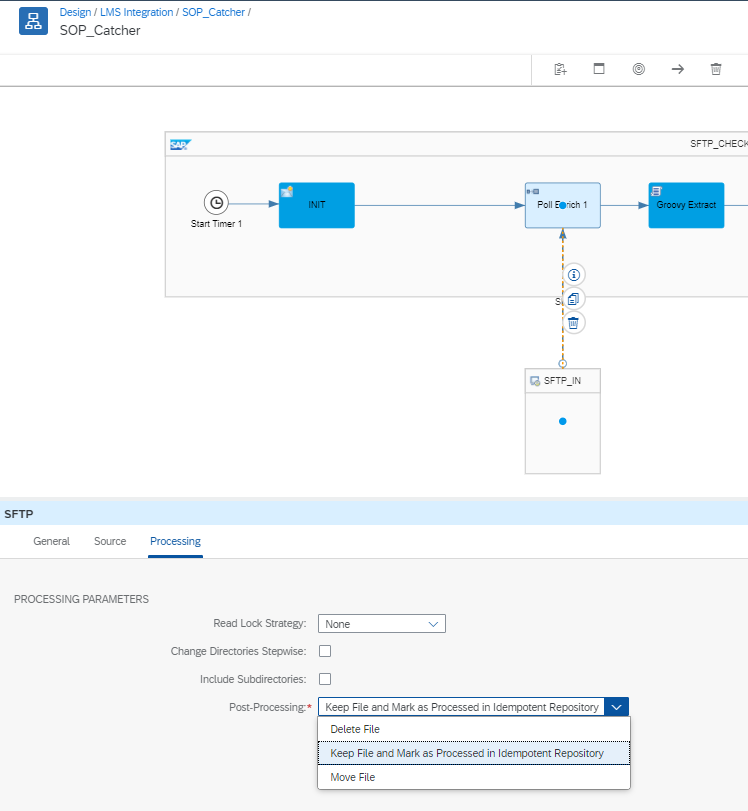 As you can see there is no way to keep file for next run....

As said, this feature will come with the next update only. This is in about 2-3 weeks. Afterwards you will find it 🙂

Hi Mandy Krimmel ,
With Poll Enrich, when I am trying to use SFTP adapter and post processing as delete, its not working. Is there any limitation around deletion the file after processing with Poll Enrich ?

This should work, maybe there is a problem with permission to delete the file? Maybe check the log files in the sftp server.

Thank you for sharing this information, it's really efforts saving functionality in middleware. In omy current development we have FTP server ,any tentative date when we are planning to have this functionality for FTP?

It is planned for the September or October update, depending how well the testing goes.

Thank you for quick reply and update Mandy, it's really helpful .Just check roadmap plan and it's in Q3, eagerly waiting for this feature as this will help to reduce lots of customize  efforts in development .

Hi Mandy,  In this SFTP poll enrich processing option for sorting and polling is missing, when will this be available.  Or is this by design where you have to pass the dir/filename as a variable to poll enrich > ftp?

This is as per design, the sorting does not work together with the poll-enrich step. Because of this this option is not available. If you need a specific file you need to pass the file name as header/property.

I just want to know the differences between Content enricher via SFTP and Poll enricher. I understand that poll enricher has better aggregation strategies.

Want to know the other differences reason being poll enricher works for sender and Content enricher works with a receiver. However both of these are actually polling SFTP based on the file name, directory details we configure. They poll the file data and enrich as per aggregation strategy.

Content Enricher is always using the response coming back from the receiver to aggregate. It is using a receiver channel. And if you choose a receiver channel you can write files to sftp adapter but not poll files from there. The polling of files in the middle of the flow only works with the poll enricher as this is using a sftp sender channel.

Content Enricher is usually used with HTTP based adapters that send a response and this response is to be aggregated to the payload.

Thanks for this. We wanted to check whether the Sender can also be an SFTP? We wanted to be able to process and incoming SFTP file and perform a lookup on another SFTP file using the poll enricher.

Yes, this is possible.

Thanks, Mandy! Indeed the CPI Consultant confirmed this.