All in all, it integrates very well into an existing SAP Landscape – be it on-premises, be it at hyperscalers.

2021-10-15: Added a section describing how to use the SAP Web Dispatcher to securely integrate legacy devices not supporting latest protocols or strong cipher suites.

Capabilities of the SAP Web Dispatcher

There are different reasons why we may want or need to deploy the SAP Web Dispatcher as a reverse proxy in our SAP Landscape.

Some of them are

Some more security focused reasons are

I did a quick search through some blogposts dealing with the SAP Web Dispatcher. While I could find many valuable blogs going into details of certain configuration aspects I could find none talking about this important superior topic.
In the following I listed some options and noted for each the issues I see.

Please note: I picked just some examples. For sure there exist a lot of possible combinations or variations of these.
At time of writing there is no official support to deploy the SAP Web Dispatcher in a container (see SAP Note 1122387) so I did not consider such a setup.

Now let’s have a closer look where we may place the SAP Web Dispatcher as reverse proxy for one of our SAP backend systems.

Please note: In the figures I use SAP NetWeaver (AS ABAP and AS Java) as the backend, but almost everything is also valid for SAP HANA XSA (as well as mostly for the deprecated SAP HANA XS Classic) as a backend.

The first deployment option which may come into one’s mind is to startup the integrated SAP Web Dispatcher of the (A)SCS instance. Details about how to do so can be found at SAP Note 2771578. Problems we can identify in this scenario:

The deployment option we may logically consider next is to setup a standalone SAP Web Dispatcher on the host of the (A)SCS instance.

Problems we still can identify in this scenario:

The last consideration may then be to setup a standalone SAP Web Dispatcher on a separate host. From a security perspective this is the go-to architecture.

To further increase the security level

Integration of the SAP Web Dispatcher into one System Landscape

Since SAP system landscapes consist of a two or more systems (development, sandbox, quality assurance, integration test and production system) as a next step we have to think about how to include all the systems in our considerations.

So, let’s start with the simplest architecture. In the next deployment option, we separate productive from non-productive. To further increase the security level:

When we have several (independent) SAP system landscapes in our environment we may come to a point where we have to consider cost savings. Though we may think about optimizations and come to an architecture in which multiple landscapes share a SAP Web Dispatcher.

If we still like to separate the traffic between productive and non-productive systems, we may think about connecting multiple backends of the same classification to one SAP Web Dispatcher. 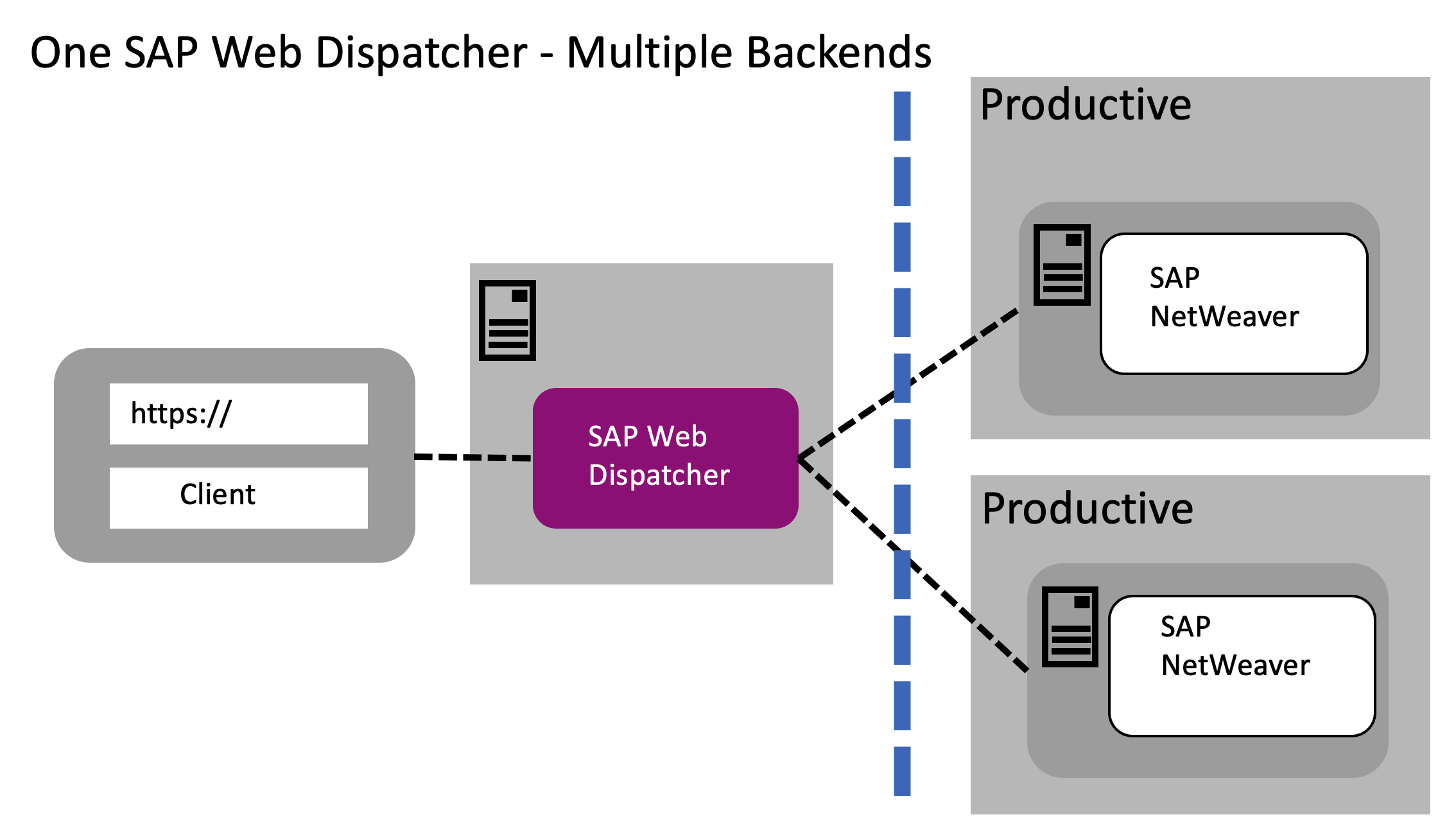 If we still like to save money for an additional box, we may consider running a farm of SAP Web Dispatchers on one host. 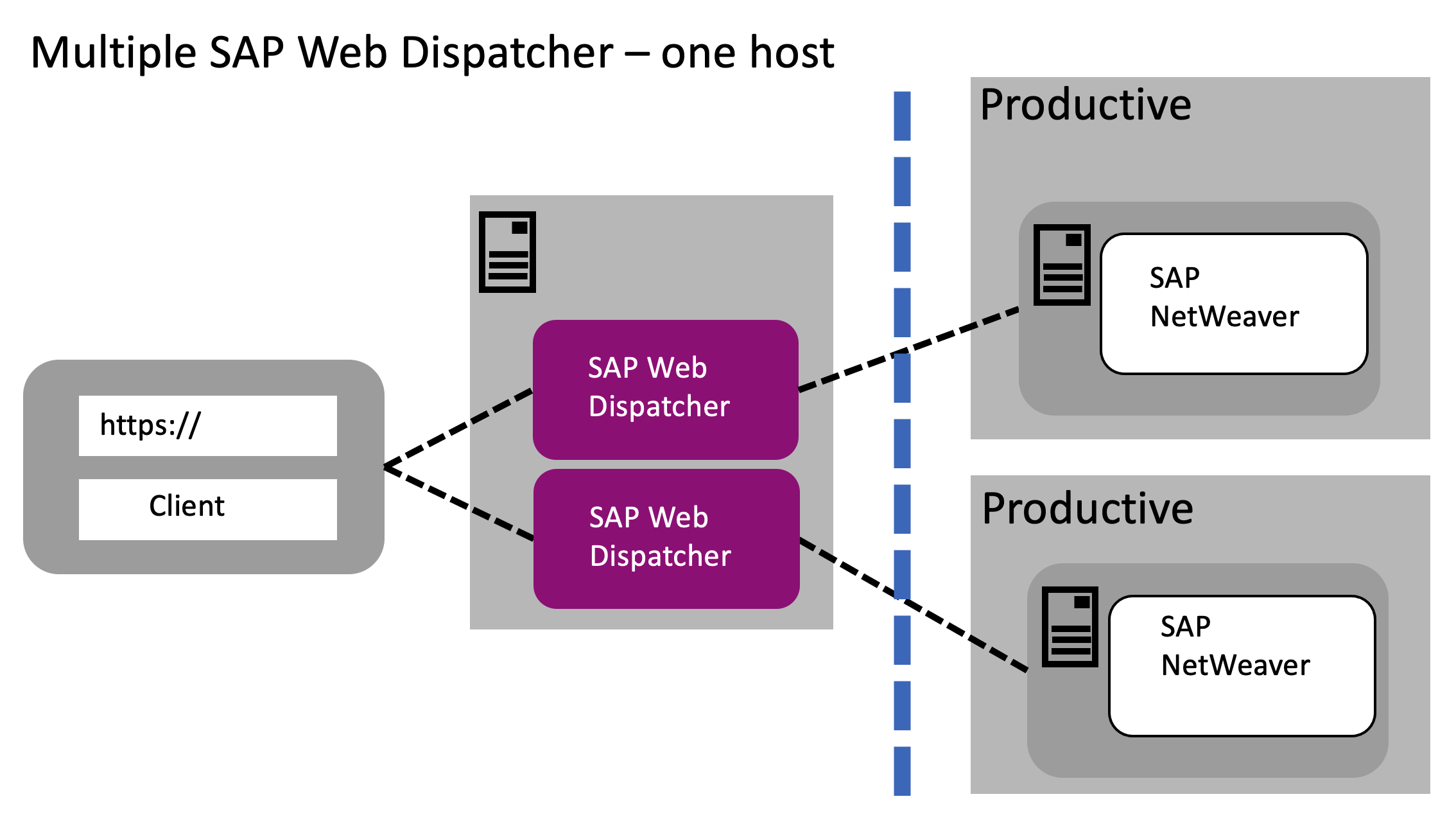 In some scenarios, legacy devices are used which have been an expensive invest and where the ROI is not reached, yet. Such legacy devices are prone to be used over many many years and get seldom updated. For example, barcode scanner or IoT devices. To keep such devices connected to the SAP backend system without weakening the security of all interfaces.

It might be desirable to use the SAP Web Dispatcher for offering a dedicated entry point. To achieve that, a SAP Web Dispatcher could be placed as close as possible to the legacy devices. It may support defined protocols and cipher suites considered as insecure and weak, and be restricted to be accessed only from defined sources. As a conclusion we can note: The landscape architecture depends on our budget, already existing operation automation, as well as on our risk appetite.

Finally, I like to promote my blogpost about configuration of TLS protocol versions and cipher suites offered by the CommonCryptoLib which is also used by the SAP Web Dispatcher for providing TLS encryption.

This is very helpful. Thank you for sharing!

Because you can never know too much about web dispatchers... Thanks Johannes!

Hello;
thank you for this relevant presentation.

Thanks a lot for the article,

I was wondering if it's possible to have multiple SAP Web Dispatcher for one S/4Hana System ?. In our company, we have several subsidiaries which are geographically dispersed and we are thinking of deploying a SAP Web Dispatcher on each subsidiary, and we don't know if it's the right solution to follow.

Yes, you can install more than one Web dispatcher for one S/4HANA System. This could be used for HA purpose and differentiation of subsidiaries.

You can also differentiate subsisiaries using different URLs for each on the same web dispatcher.