RISE with SAP and custom code migration – What is included

On January 27th, 2021 SAP launched the new Business Transformation as a Service offering RISE with SAP providing the path to an Intelligent Enterprise for you, as SAP customer, at your individual terms, speed and timeline.

According to the blog of SAP’s CEO Christian Klein Introducing RISE with SAP – Business Transformation as a Service SAP together with our strong ecosystem will help to chart your journey to the business transformation in three simple steps: business process redesign, technical migration and building of your Intelligent Enterprise.

Technical migration comprises technical tools and services from SAP for the smooth transformation including also identification of custom code which requires migration. Embedded services and tools are included into every RISE with SAP subscription and comprise also the Custom Code Migration SAP Fiori app, which performs checks on your custom code, which needs to be migrated from your existing SAP ERP system to SAP S/4HANA.

Traditionally the Custom Code Migration app has involved setting up an SAP S/4HANA sandbox system in the customer environment but as it turned out some customers don’t have an SAP S/4HANA sandbox in their landscapes. Another possibility to use the Custom Code Migration app is setting it up in the ABAP Environment of the SAP Business Technology Platform (SAP BTP ABAP Environment) which must be entitled separately.

With RISE with SAP you can setup the Custom Code Migration app in SAP BTP ABAP Environment which can be entitled using Cloud Platform Enterprise Agreement Credits included into your RISE with SAP offer.

Business transformation can be significantly accelerated if you follow the Clean Core principle for your SAP systems. Your system conversion project to SAP S/4HANA is a given opportunity to invest into simplification and clean-up of your custom code.

Our statistics from the past >=15 years show, that 30% to 60% of custom code in an SAP ERP productive system is not executed, another considerable part of it can be replaced through the SAP standard code upon the system conversion. Removing obsolete code will significantly save costs for the upcoming effort for adaptation and future maintenance of custom code. At the same time this is certainly a first step towards the Clean Core.

Identification of not used custom code starts with gaining understanding about its use in customer productive environments. Hence SAP recommendation is at least 1 year prior to your SAP S/4HANA conversion project to collect usage data in your productive systems using ABAP Call Monitor and SUSG. See the blogs ABAP Call Monitor (SCMON) – Analyze usage of your code and Aggregate usage data in your production system with SUSG transaction for details.

Custom Code Migration app – What is in for you

The work with the Custom Code Migration app begins with the determination of the custom code scope for SAP S/4HANA. The app defines the initial scope based on the uploaded usage data. Afterwards you can adjust the scope manually. For example, you can exclude your custom code objects, which will become obsolete in the SAP S/4HANA system or include new developments, for which usage data doesn’t yet exist in your productive SAP ERP system.

When defining the scope you can also display the complexity of your custom code in a graphic. It summarizes the number of relevant changes in accordance with the complexity of the custom code on package level (or request entry point level of ABAP Call Monitor (SCMON)). Complexity metrics represents how difficult is the code to understand and to implement when applying changes.

This helps you to estimate the effort of your custom code migration activities in advance. In the practice the most complex packages experience also very often the most frequent changes and, as a consequence, increase the maintenance costs for your custom code. You can use the code complexity diagram as a technical metric to prioritize which of your custom developments need a redesign. The upper right part of the diagram represents the most complex and most frequently changed development packages. You can start your redesign activities for those hot spots.

Generally, SAP recommendation is to avoid “lift and shift” of code and take time to reduce the scope and complexity of the custom code for SAP S/4HANA. There is number of procedures how you can do it, for example remove old business logic, redesign your custom applications using the SAP S/4HANA extensibility or consider SAP BTP transformation for loosely coupled custom extensions. Of course, it is challenging and will cost you time and effort, but this will pay back during the future SAP S/4HANA upgrades and transformation to SAP BTP.

Check out Custom Extensions in SAP S/4HANA Implementations – A Practical Guide for Senior IT Leadership for more details.

The custom code deletion procedure is fully integrated into SAP S/4HANA conversion process. You just create the deletion transport request in your SAP ERP system using the Custom Code Migration app. During system conversion this deletion transport can be added to the SAP Software Update Manager (SUM) as a customer transport, and SUM will delete it from the system. 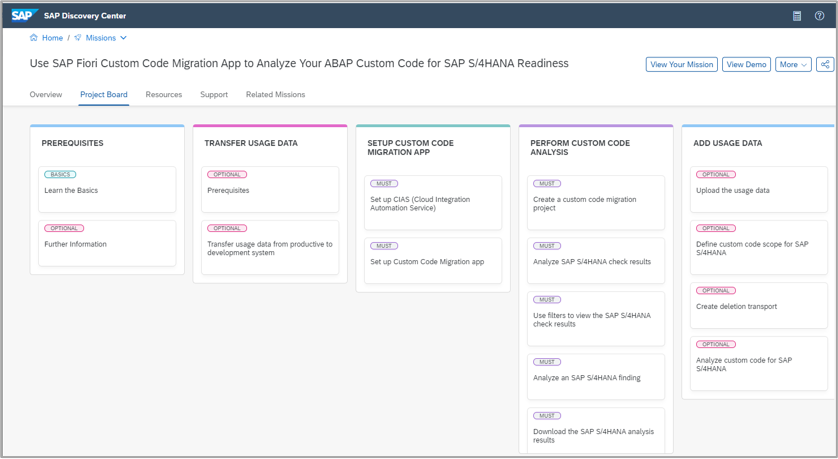