Picture this – you are the manager of a supermarket and would like to forecast the sales in the next few weeks and have been provided with the historical daily sales data of hundreds of products. What kind of problem would you classify this as? Of course, time series modeling, such as ARIMA and exponential smoothing, may come out into your mind naturally. With these tools, you could take sales of each product as separate time series and predict its future sales based on its historical values.

After a minute, you realize that the sales of these products are not independent and there is a certain dependency amongst them. For example, during festivals, the promotion of barbecue meat will also boost the sales of ketchup and other spices. If one brand of toothpaste is on sale, the demand of other brands might decline. Such examples are countless. When there are multiple variables at play, we need to find a suitable tool to deal with such Multivariable Time Series (MTS), which could handle the dependency between variables.

In SAP HANA Predictive Analysis Library(PAL), and wrapped up in the Python Machine Learning Client for SAP HANA(hana-ml), we provide you with one of the most commonly used and powerful methods for MTS forecasting – VectorARIMA  which includes a series of algorithms – VAR, VARX, VMA, VARMA, VARMAX, sVARMAX, sVARMAX.

This blog post assumes that you already have some familiarity with univariate time series and ARIMA modeling (AR, MA, ARIMAX, sARIMA, …). In hana-ml, we also provide these tools – ARIMA and AutoARIMA and you could refer to the documentation for further information.

1. Introduction of MTS and VectorARIMA

A Multivariate Time Series consist of more than one time-dependent variable and each variable depends not only on its past values but also has some dependency on other variables.

To deal with MTS, one of the most popular methods is Vector Auto Regressive Moving Average models (VARMA) that is a vector form of autoregressive integrated moving average (ARIMA) that can be used to examine the relationships among several variables in multivariate time series analysis.

In VectorARIMA, the orders of VAR/VMA/VARMA models could be specified automatically. Note that the degree of differencing needs to provided by the user and could be achieved by making all time series to be stationary.

In the auto selection of p and q, there are two search options for VARMA model: performing grid search to minimize some information criteria (also applied for seasonal data), or computing the p-value table of the extended cross-correlation matrices (eccm) and comparing its elements with the type I error. VAR model uses grid search to specify orders while VMA model performs multivariate Ljung-Box tests to specify orders.

In this section, a use case containing the steps for VectorARIMA implementation is shown to solidify you understanding of algorithm.

A public dataset in Yash P Mehra’s 1994 article: “Wage Growth and the Inflation Process: An Empirical Approach” is used and all data is quarterly and covers the period 1959Q1 to 1988Q4. The dataset has 123 rows and 8 columns and the definition of columns are shown below.

Visualize the data in the figure below and through our observation, all 8 variables has no obvious seasonality and each curve slopes upward. Hence, in the following analysis, we will not consider the seasonality in the modeling. 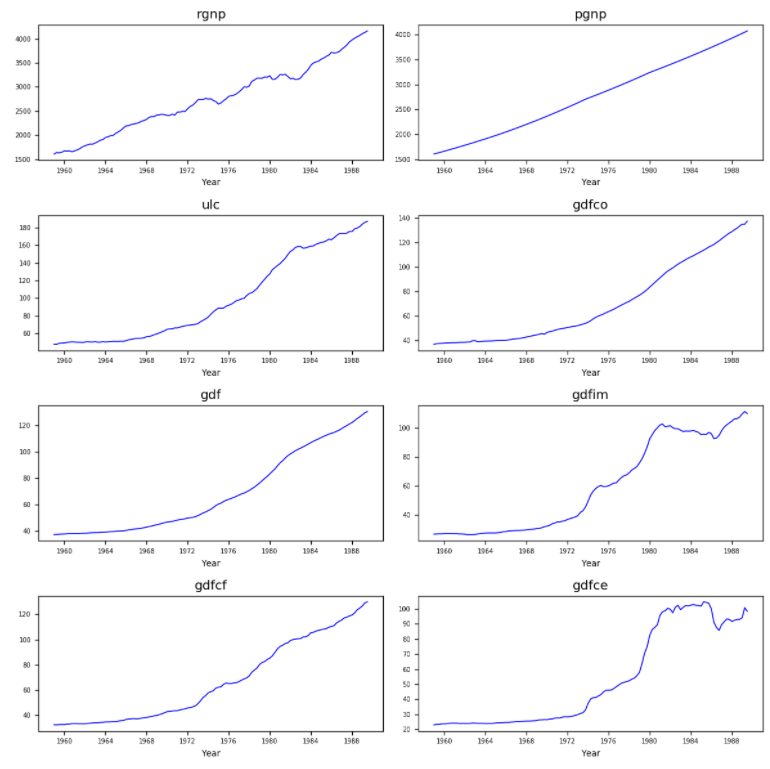 We firstly need to create a connection to a SAP HANA and then we could use various functions of hana-ml to do the data analysis. The following script is an example:

The dataset has been imported into SAP HANA and the table name is “GNP_DATA”. Hence, we could access to the table via dataframe.ConnectionContext.table() function. Then, we add a column called ‘ID’ to the original DataFrame df as VectorARIMA() requires an integer column as key column.  Then, select top 80% of df (i.e. 99 rows) as training data and the rest (i.e. 24 rows) as test data for modeling in the next step.

The data is ready, let’s start the trip of MTS modeling! We will involve the steps below:

The Null Hypothesis of the Granger Causality Test is that lagged x-values do not explain the variation in y, so the x does not cause y. We use grangercausalitytests function in the package statsmodels to do the test and the output of the matrix is the minimum p-value when computes the test for all lags up to maxlag. The critical value we use is 5% and if the p-value of a pair of variables is smaller than 0.05, we could say with 95% confidence that a predictor x causes a response y.

The script is below:

From the result above, each column represents a predictor x of each variable and each row represents the response y and the p-value of each pair of variables are shown in the matrix. Take the value 0.0212 in (row 1, column 4) as an example, it refers that gdfco_x is causal to rgnp_y. Whereas, the 0.0 in (row 4, column 1) also refers to gdfco_y is the cause of rgnp_x. As all values are all below 0.05 except the diagonal, we could reject that the null hypothesis and this dataset is a good candidate of VectorARIMA modeling.

As VectorARIMA requires time series to be stationary, we will use one popular statistical test – Augmented Dickey-Fuller Test (ADF Test) to check the stationary of each variable in the dataset. If the stationarity is not achieved, we need to make the data stationary, such as eliminating the trend and seasonality by differencing and seasonal decomposition.

In the following script, we use adfuller function in the statsmodels package for stationary test of each variables. The Null Hypothesis is that the data has unit root and is not stationary and the significant value is 0.05.

From the results above, we could see none of these varibles is stationary. Let us use the differencing method to make them stationary.

Let us do the second differencing:

Great! All the time series are now stationary and the degree of differencing is 2 that could be used in the model building in the next step.

Let’s invoke VectorARIMA() function in hana-ml to build a model of MTS in this section.

Commonly, the most difficult and tricky thing in modeling is how to select the appropriate parameters p and q. Many information criterion could be used to measure the goodness of models with various p and q, e.g. AIC, BIC, FPE and HQIC. However, these metrics may select the different values of p and q as optimal results.

Hence, in our VectorARIMA, we provide two search methods – ‘grid_search’ and ‘eccm’ for selecting p and q automatically. The grid_search method is popular which could select the model based on a specific information criterion and in our VectorARIMA, AIC and BIC are offered. Sometimes, obtaining the model based on one information criterion is not reliable as it may not be statistically significant. therefore, ‘eccm’ search method is used to compute the p-value table of the extended cross-correlation matrices (eccm) and comparing its elements with the type I error. When the p-value of a pair of values(p, q) in the eccm is larger than 0.95, we could say it is a good model. In the following experience, we use these two methods and then compare their results.

As we have obtained the degree of differencing d = 2 in the stationary test in Section 2.4.2, we could set d = 2 in the parameter order. For parameter p and q in the order, let’s use the automatic selection mechanism and set them to be -1. We also set max_p and max_q to be 5 as large values of p and q and a complex model is not what we prefer.

When search method ‘grid_search‘ is applied: 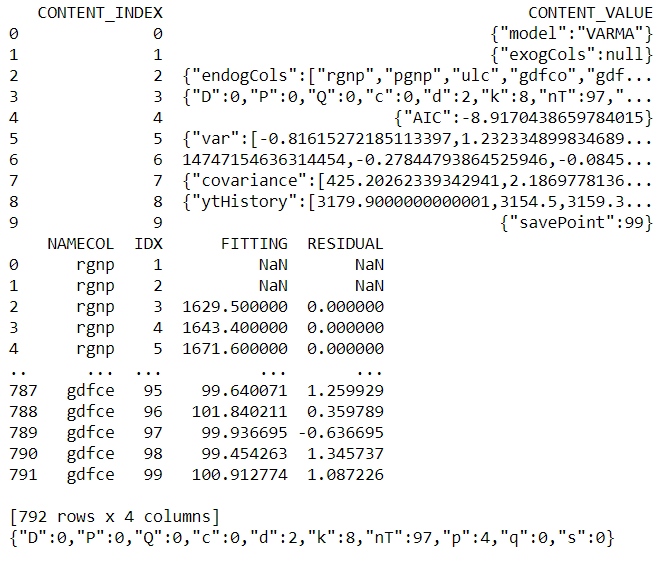 When ‘eccm’  search method is used: 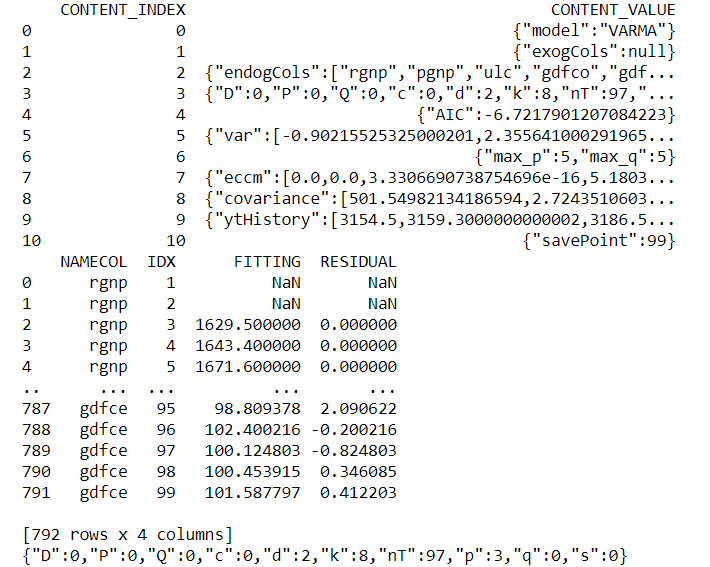 From the two results above, a VAR model is selected when the search method is “grid_search” and “eccm” and the only difference is the number of AR term. which one is better? Let’s explore these two methods based on content of the eccm which is returned in the vectorArima2.model_.collect()[‘CONTENT_VALUE’][7].

The result of eccm is shown in a row and we need to reshape it to be a matrix for reading easily.

Hence, we will choose the model (3, 2, 0) to do the following Durbin-Watson statistic to see whether there is a correlation in the residuals in the fitted results.

After the implementation above, we will use the model (3, 2, 0) in the next step.

Visualize the forecast with actual values: 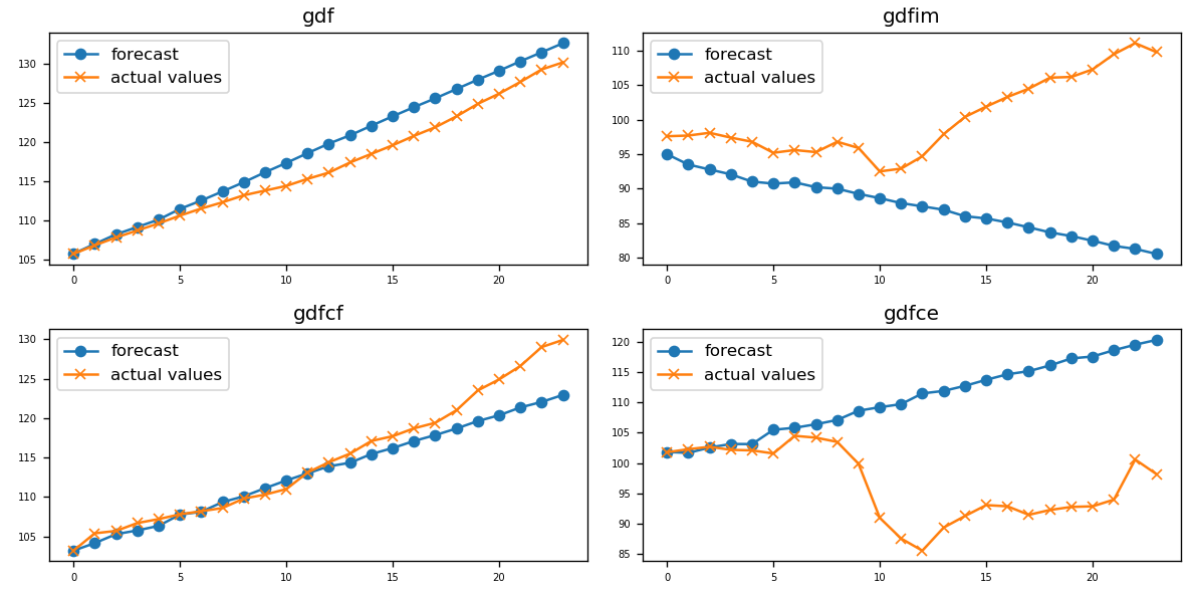 Then, use accuracy_measure() function of hana-ml to evaluate the forecasts with metric ‘rmse’. 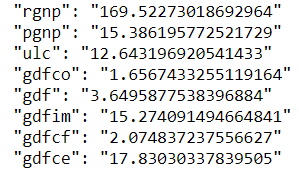 We could obtain the result of IRF by setting parameter ‘calculate_irf’ to be True and then the result is returned in an attribute called irf_. An example of VectorARIMA model(3,2,0) is shown below.

As shown above, vectorArima3.irf_ contains the IRF of 8 variables when all these variables are shocked over the forecast horizon (defined by irf_lags, i.e. IDX column 0 – 19), so the total row number of table is 8*8*20=1280.

If you want to learn more of VectorARIMA function of hana-ml and SAP HANA Predictive Analysis Library (PAL), please refer to the following links:

We also provide a R API for SAP HANA PAL called hana.ml.r, please refer to more information on the documentation.

For other blog posts on hana-ml: