Using Microservices in your SAP landscape

An SAP-centric approach has clear advantages when the app has heavy reliance on SAP core data.  Within the SAP universe there are many different types of development coding blocks that enable re-use and standardization that we use as the norm such as the standard APIs to integrate SAP’s many cloud products.

In the non-SAP universe, the concept of microservices is used to build custom apps.  With this approach, each app is created from multiple individual components, which are microservices, integrated using APIs.

Using this architecture, apps are easier to scale and faster to develop. Developers build complex apps quickly using libraries of microservices.  These are tried-and-tested code blocks deployed by others.  The separation of the various solution components can make design, build and testing phases easier.

Many SAP-centric organizations have not embraced the microservice approach, so have not realized the benefits.  Apps developed in the SAP universe tend to be ‘monolithic’, in that they are self-contained.  Of course, they rely on BAPIs for the conversation with the database, but each app works as a central hub, with self-contained logic, calling BAPIs as required.

Outside the organization you can find a wealth of services that you can include in your apps to reduce the amount of code to develop.  With this approach, you can protect the SAP back-end, by shifting processing effort away from the core system. 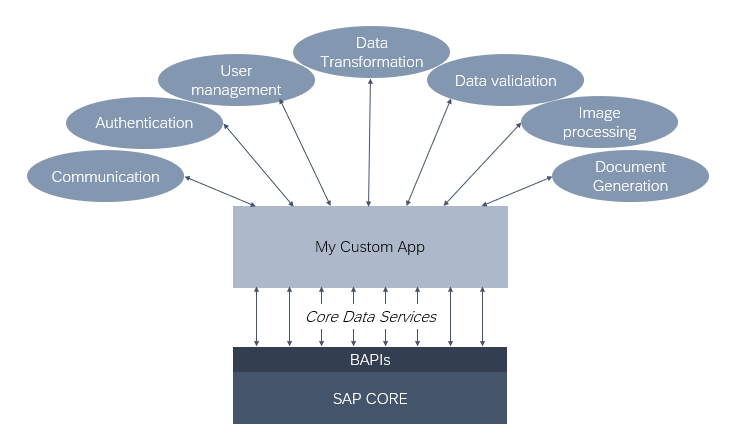 Examples of such services include image processing, document generation and data transformation: There is no need to rely on the SAP core when the database is not updated or read.

Since each microservice is independent, it is easy to swap in replacement services from another supplier in search of better cost or performance.  This is a huge benefit of the microservice approach.

We have built Renda.io to be the first microservice platform for SAP.  Each microservice that we include is supplied with full API documentation and sample code for integration with applications written using ABAP, SAPUI5 or SAP Conversational AI.

By combining SAP Core Data Services, SAP APIs and third-party microservices, you can accelerate the development of consumer-facing apps that are easily scalable and protect your SAP core system by running key services in the cloud.