Welcome to the “lab preview” of the Custom CDS Views app 2105! This time, we have some more changes that hit the eye. Let me tell you that much already: Colours matter 😉

The work list was extended with new states that indicate the “health” of your custom CDS views. They appear on the left side of each row, just like the blue “new” indicator that was already there before. The two additional states are now orange and red and refer to the “Rework” and “Task Priority”, but also to the newly introduced “Check Result” column:

As usual, the “Task Category” column will give you a better understanding, what the rework tasks are and as you enter the edit mode of a view that needs rework, you will get a detailed description. The “Check Result” column brings the results of both, the check as well as the publish actions to the overview list, that were previously only available in the edit mode of a custom CDS view.

In addition of the health indication, we also updated the information on the lifecycle and editing status of your custom CDS views:

In the dialog, that you use to add the primary or an associated data source, we also introduced these states. In this case, the state indicates how suitable a data source potentially is, in order to be used as a data source in a custom CDS view. This “suitability” state refers to the so called supported capabilities* of the VDM data sources (mentioned in the 2102 update). In addition to the column “Modelling Data Source”, that we introduced in the previous release already, we enhanced the capability information with the column “Modelling Association Target”. Data sources that do not have one of the mentioned capabilities can still be used although this is not recommended. Let me give you some more details what the capabilities mean for the usage in Custom CDS views:

The log, that displays infos and issues in the check and publishing process, has moved from its hideout behind the status link to a separate tab that is now always visible. In addition to that, the  colour of the tab icon reflects the check or publishing result. 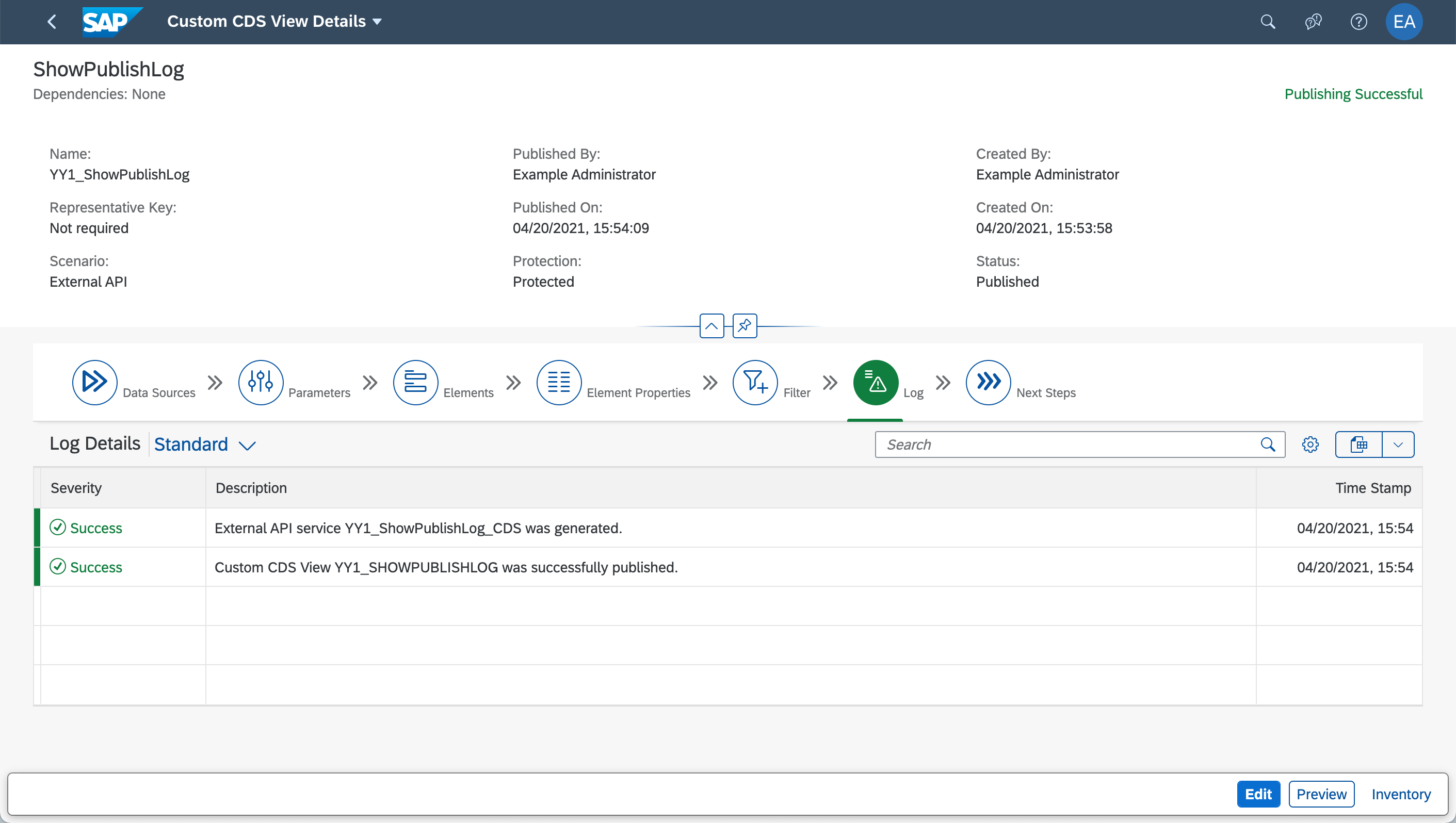 On top of that, the issues, warnings and info messages are now collated to the tabs they belong to and all tabs are semantically painted according to the issues that appear in it. 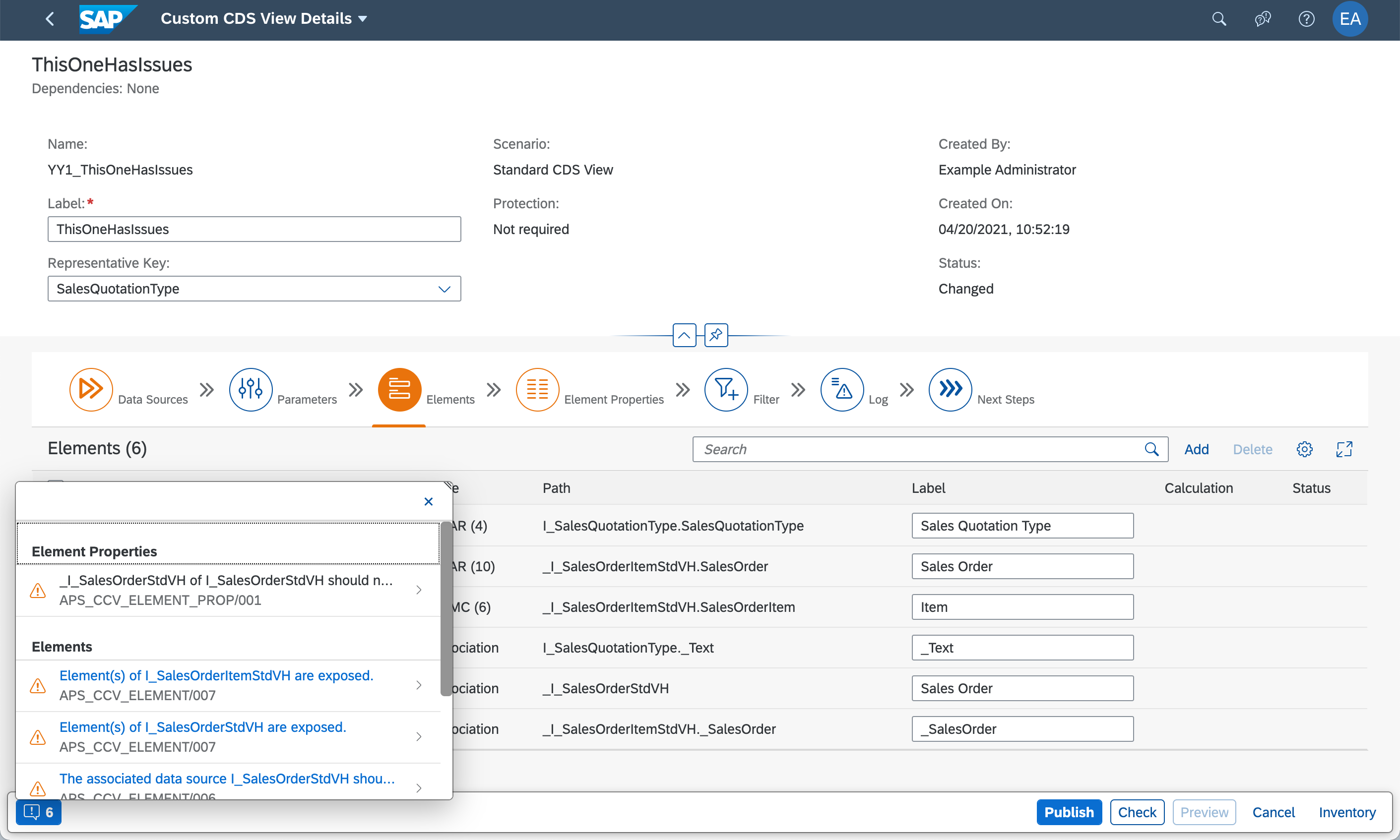 There are some other news that are not so colourful and may not directly catch your eyes, but are still worth to be mentioned:

When you create a custom CDS view with the Dimension Scenario, you will now be allowed to adapt key attributes (add and now even remove the key attribute from fields). This feature was mainly developed with the use case in mind to use a custom BO as data source for an analytical dimension that has an alternate key and now enables you to swap the key from the UUID of the CBO to the alternate key.

In 2011 we started to create all new custom CDS views with a new structure in order to optimise their performance within more challenging situations. This new structure is related to the access protection mechanism and has a small side effect: When SAP does change the access protection of their VDM views e.g., by adding a new field to it, all views, that base on this VDM view will only receive the updated access protection when they are published again. These views will be marked with required “Rework” (also see the section on the work-list above).
If you have built a series of Custom CDS Views that base on each other, you had to rework them one after another in order to catch up with the changed access protection until now. With 2105, we enhanced our publishing process so that is now capable of publishing such dependent views automatically. You therefore may experience that multiple views appear in your publishing log.

Time to say good bye: For all new customers, that start their SAP S/4HANA journey with the 2105 release, the old app “Custom CDS Views (to be deprecated)” will not be available (which makes sense as it can not be used to create new Custom CDS Views since 2102 anyhow). For existing customers it is still available but we recommend to move to the new app!

In the next releases, we will continue to invest in an improved stability, user guidance as well as convenience features. In addition, we will allow to use additional VDM Views as data sources (views of type CDS V2, so called “view entities” can currently not be used as data sources). In the analytical scenarios, we will improve the handling of aggregations. And at some point in time (not yet in the next release) we will then also remove the old app (not your views of course).

Stay tuned for the next update in August. Until then, stay safe and healthy! Thanks for reading.

Thanks for sharing new features on custom CDS app with relase 2105.

Thanks andreas for giving insights

Who doesn't like a "lab's preview" of new functionality. And well detailed and explained.

Will we have "group-by" and "union" functionality in Custom CDS View soon?

unfortunately, group by and union are not on the short term roadmap of the Custom CDS Views app. The good news is that these can be realised in ADT, once the developer like extensibility becomes available, that was shown as a lab preview in TechEd 2020 (e.g. in the ABAP Strategy session "DEV200").