Thanks to our RBP team within SuccessFactors for working on this enhancement request and delivering on it.

Some of the Use Cases where the new Peers permission is useful:

Let’s take a look at the details on the feature and how to configure with the above use cases.

Scenario 1:  Restricting the target population to Employee’s peers and manager. 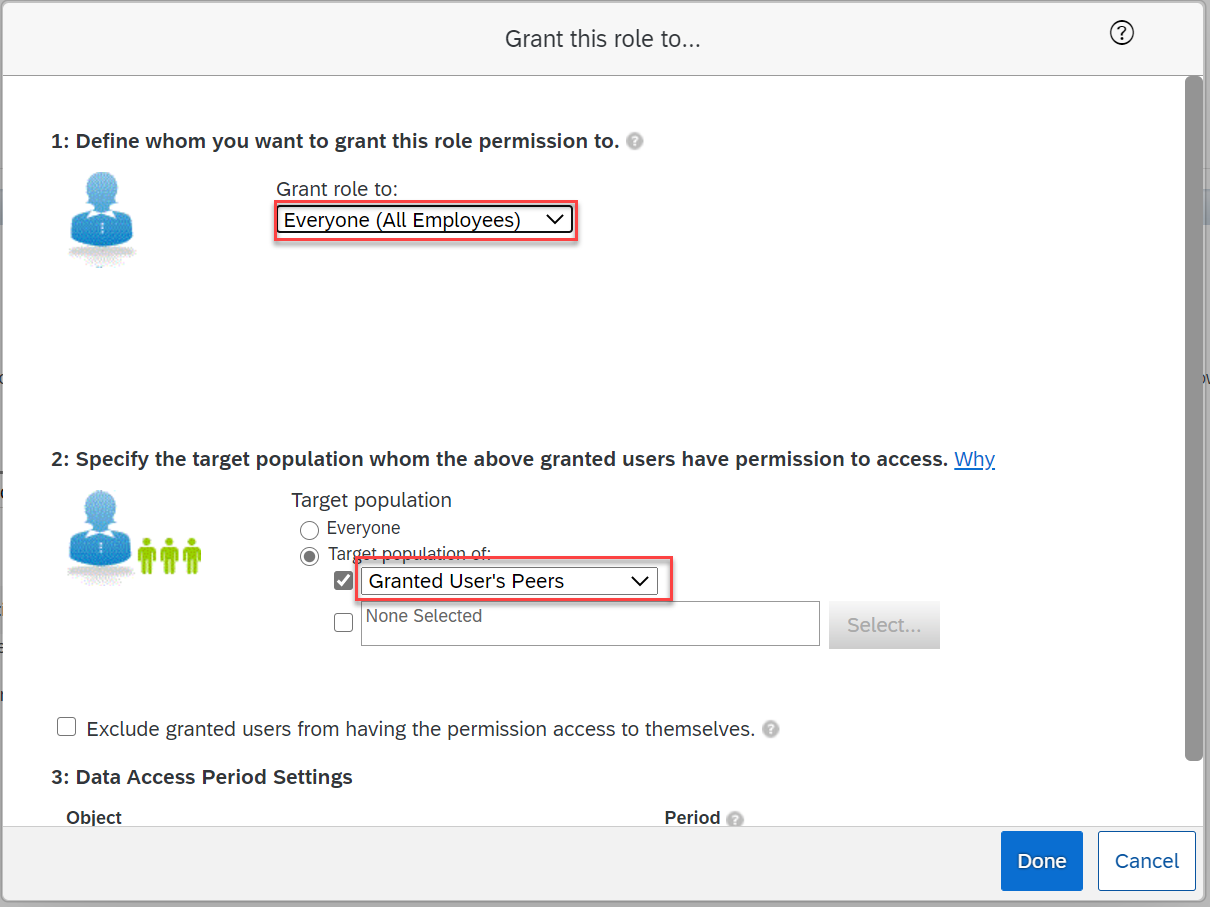 With the above permission setting, Ernst Weiss’ Peers absences are shown but his Manager’s absence is not shown as seen below: 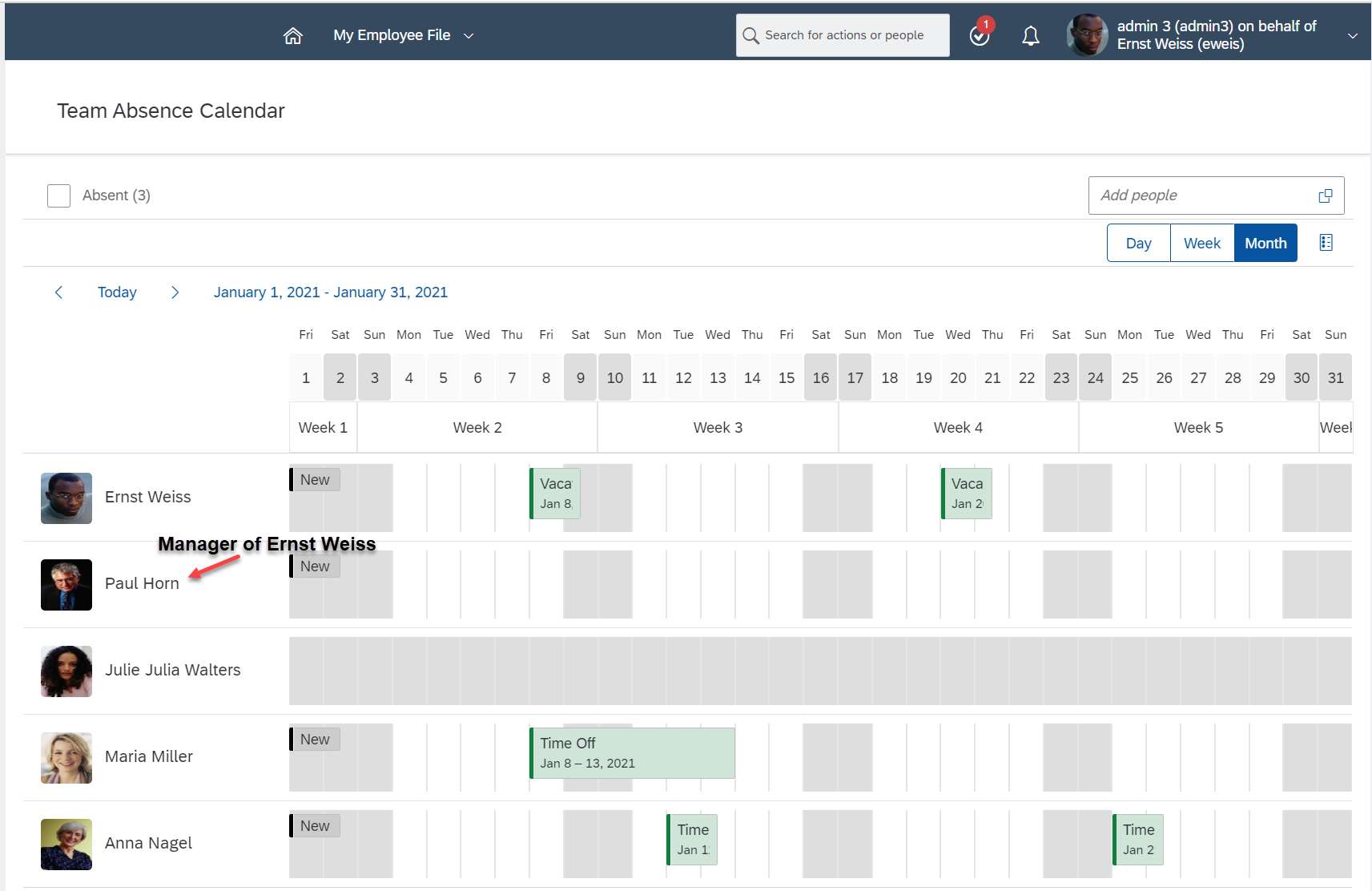 Step 3: Create a new permission group using add button. Click on Edit Granting and add “Granted User’s Manager” as Target Population. This step is optional .You can add the manager of the employee based on your requirements. If you do not want your employees to view their manager’s absence, you don’t need to add this permission group to your permission role. 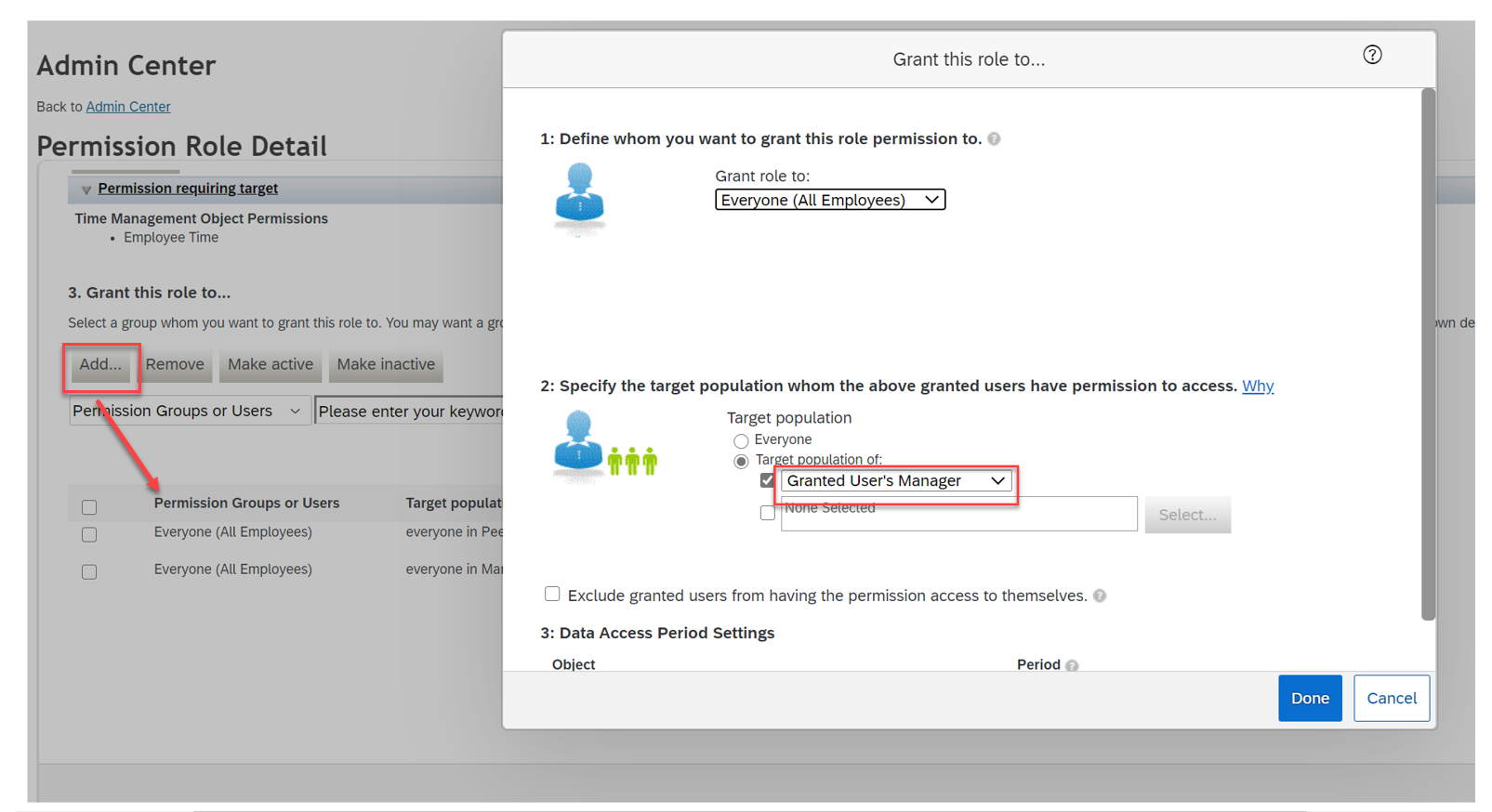 This is how it looks after defining the new permission setting for viewing Peers absences. 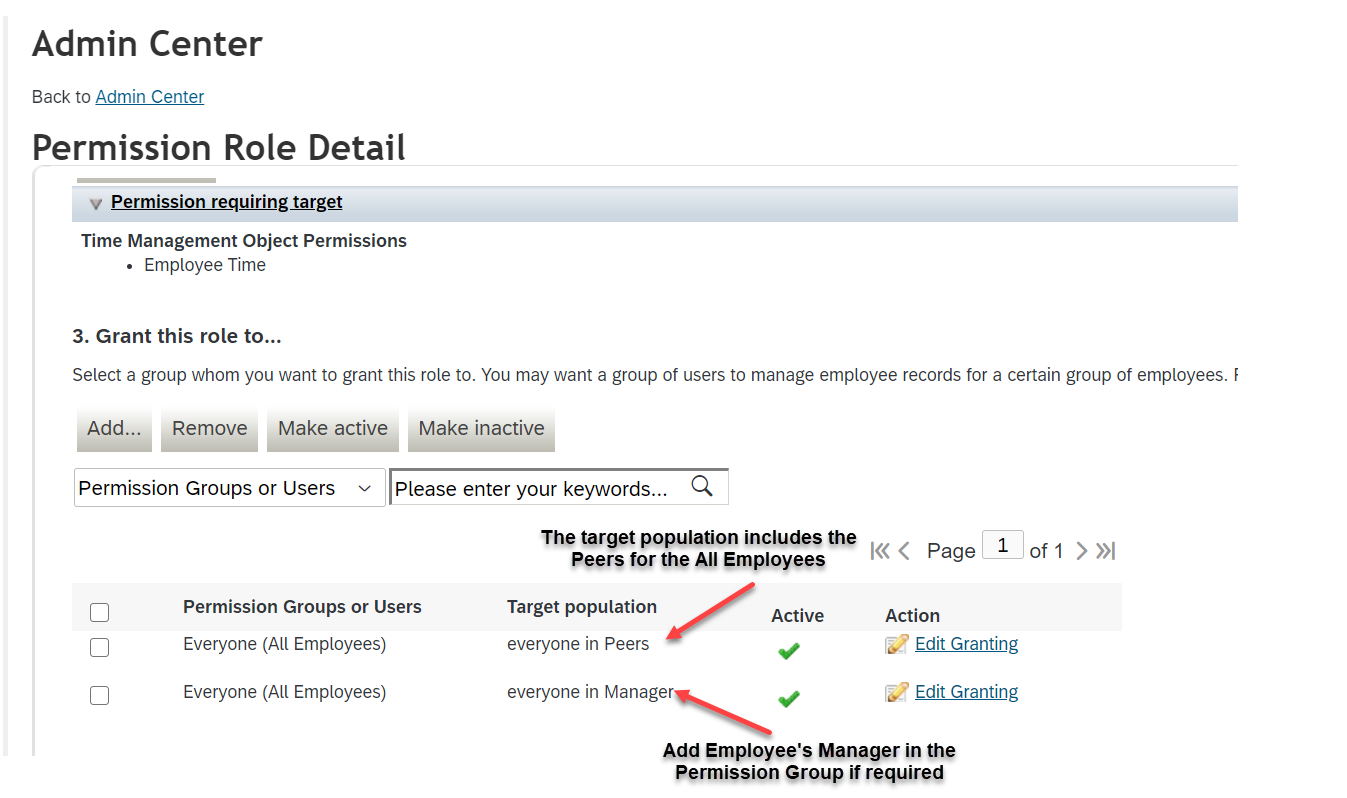 Check if Manager’s absence is shown in Team Absence Calendar. 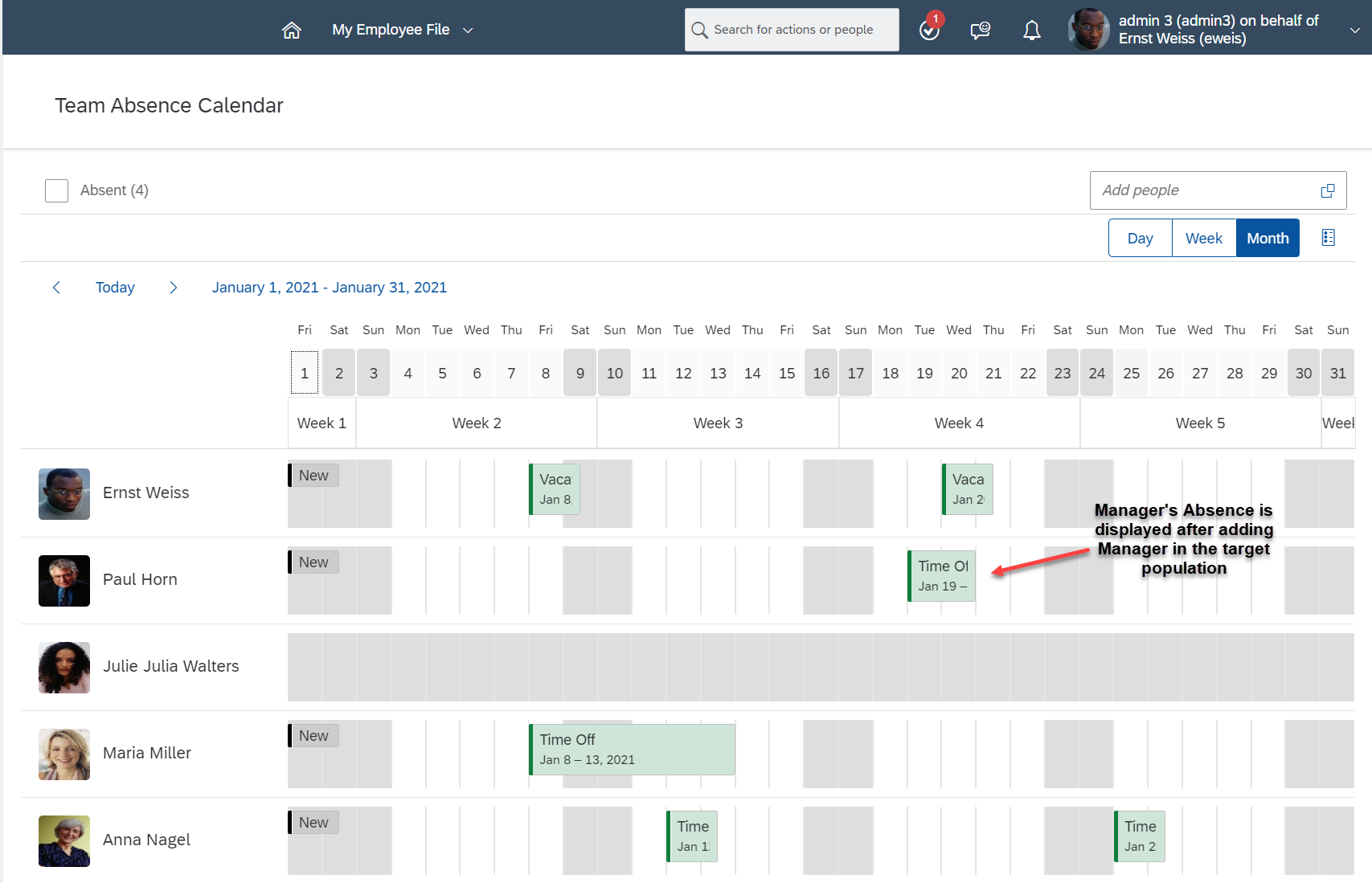 Scenario 2: Restricting the target population to peers from same legal entity as the Employee.

Example: Manager has employees reporting from both UK and DE legal entities.
Define a permission role with permission group which contains legal entity DE(ACE_DEU).
The Team Absence Calendar Peers view should only show absences of Peers who belong to legal entity DE. 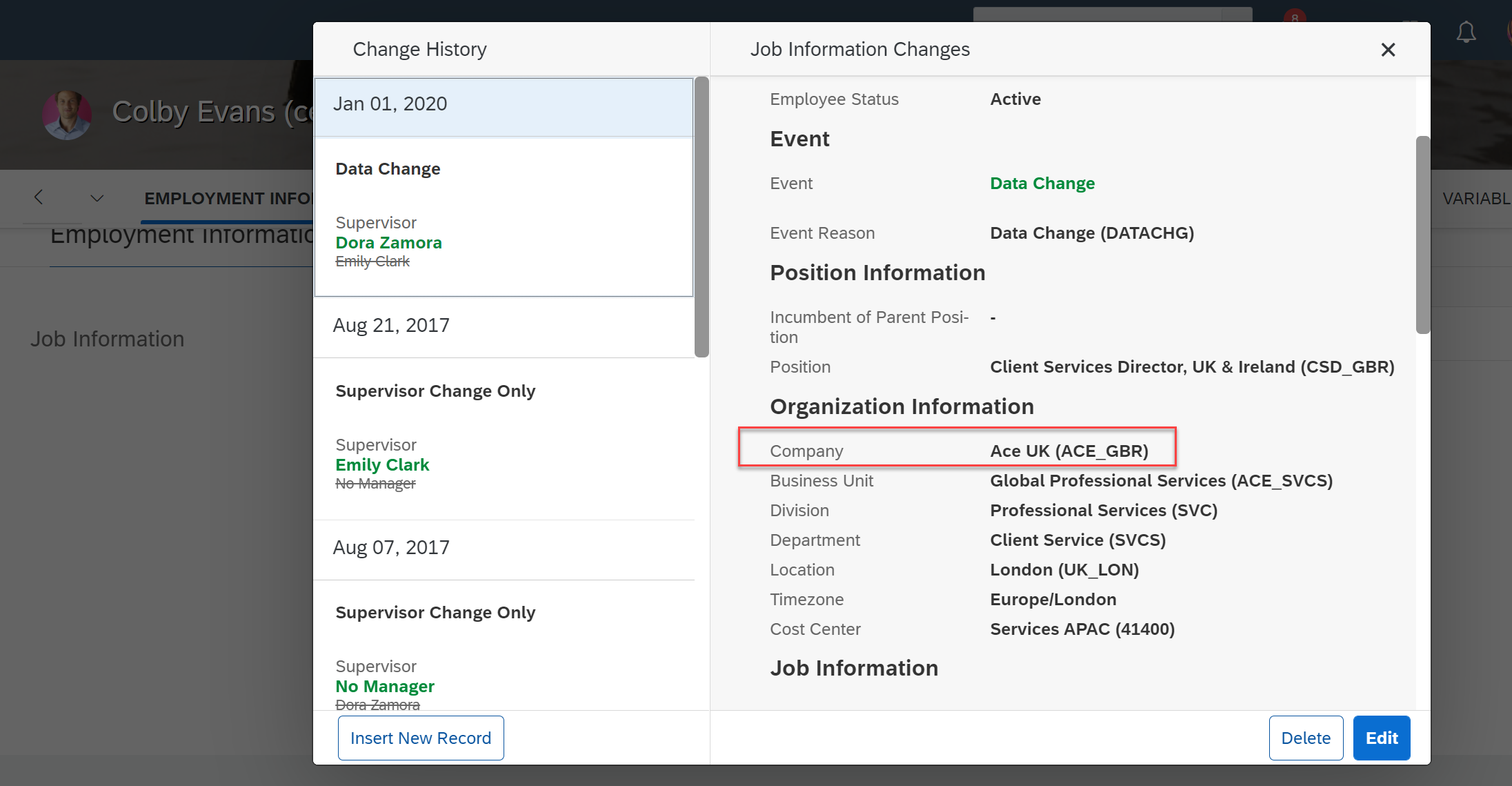 Before applying the permission, user Paul Horn can view his peer Colby Evans’ absences who belongs to legal entity ACE_GBR.

Now let’s define a permission to restrict viewing absences from any other legal entity other than DE legal entity. 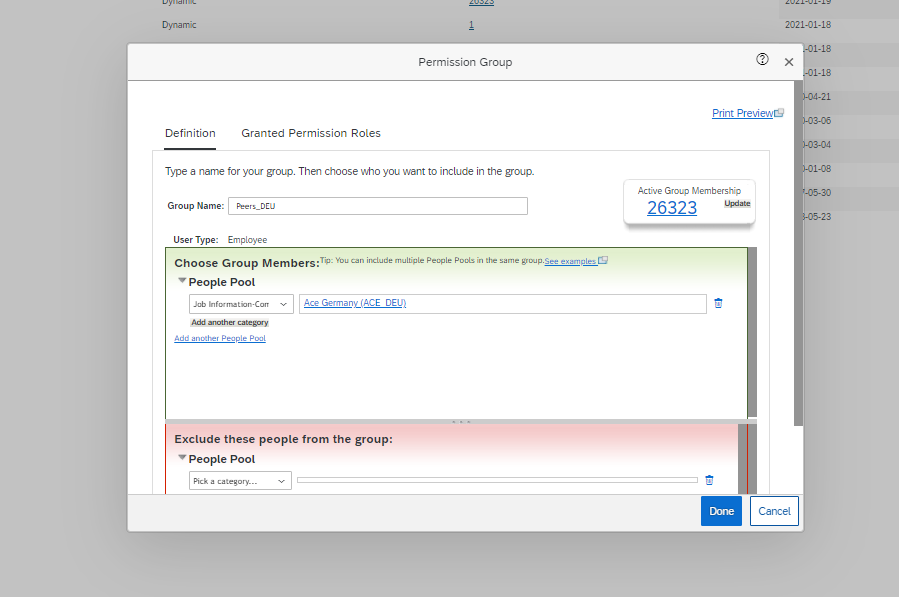 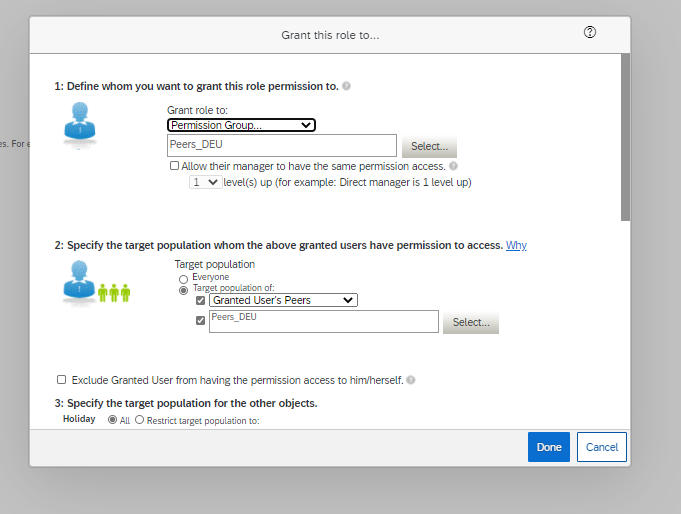 Don’t forget to assign the view permission on the Employee Time object for this permission role otherwise no absence will be shown in the peers view of Team Absence Calendar. 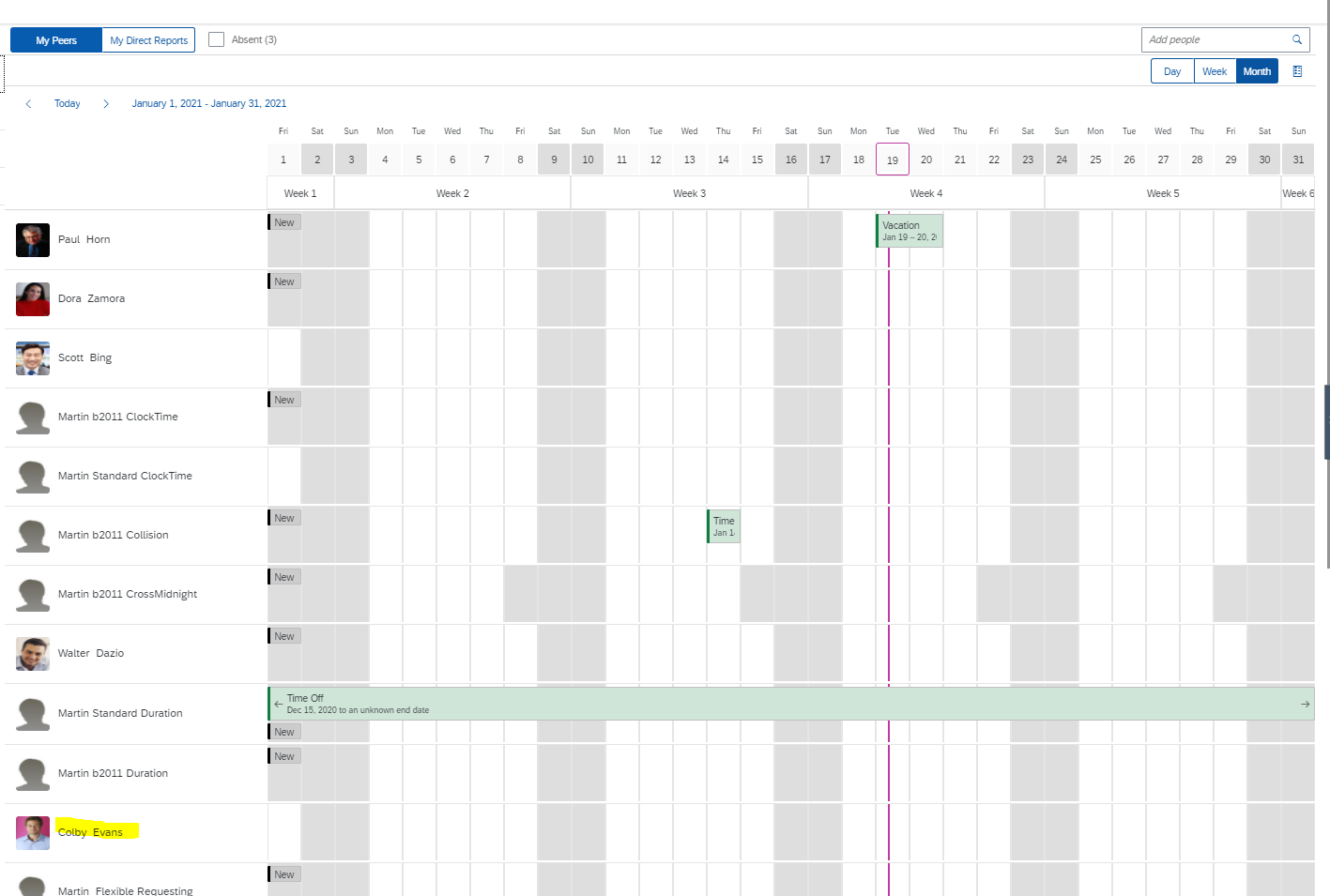 Hope you liked this new feature. Stay tuned for more such features in SuccessFactors Employee Central Time Off.

Looking forward to your feedback.

Thanks Priyanka, do you know if it's possible to add contingent workers to the team absence calendar using these new features?

No its not possible to view contingent workers in team absence calendar.

Do you know if it is possible to hide the entire "team absence" by permissions for ESS role?

Meanwhile, you could try this hack using message keys:

TIMEANDLABOR_ADMIN_LINK_SHOW_TEAM_ABSENCES=Show Team Absences
TIMEANDLABOR_ESS_TEAM_ABSENCES_COUNT=
Try setting these keys to Blank value.
However, I would suggest to wait for the new permission.
Kind Regards,
Priyanka

How to use these message keys ? Can you give a short brief.

You do not need to use the message keys anymore. We have delivered a new permission with h2 2021 release. With this you should be able to hide the team absence calendar.

If you'd like to hide the Show Team Absences button on the Time Off ESS UI for all employees, do the following:

You can check this documentation:

Is it possible for manager to see the Absence Quotas(balances) from Team Absence?

No it's not possible to see the balances in Team Absence Calendar and it is not planned as that is not the main functionality of team absence calendar.

Thanks Priyanka for your revert.

How can we get the available absences of DRs in a report format? Is there any standard report?

Could you post this question in the Time Management Community Forum? Did you mean available absences or balances?

I am asking about Time Balances of different Absence Types as per Time Profile similar to what available in Time data in People Profile.

Have you checked the "My team dashboard" which was delivered with H2 2021 release.

It gives an  overview of the Time account balances for each employees in the team.

I created a Permission role and assigned target population but the system is still not restricting the team calendar search to the target users?

The absences will only be displayed if the user has the EmployeeTime->view permission for the target/searched user.

our configuration provides in team absence calender time type information for employee himself and his line manager. Peers only see that he is absent without time type.

Is it possible to show time types in absence calender within the team, share those information with peers.

At the moment it is not possible to view the time type name for peers. We have this enhancement planned for future.

Kindly it's possible to have access per division, for example if one of the managers want to be able to see all the employees absences in this division on the absence calendar,

And also is possible for the HRBP to have absences calendar view for all the employees of the HRBP location.

No it is not possible to view absences by division or for an HRBP in team absence calendar. It was only designed to be used for Managers and Employees in a team.

For this requirement, you should use reporting and not Team Absence Calendar.