This blog will try to provide an understanding of what is Shorten Fiscal Year (SFY). It also covers finance related configurations and ends by giving an overview of stages in a SFY project.

Shortened Fiscal Year is a fiscal year that contains less than twelve months/periods.

A Shortened Fiscal Year will be required during;

For better understanding of the concept we will consider following case (illustration) throughout.

Illustration
‘Year-End Closing for Asset Accounting’ in Company Code 5000 has been executed for the last fiscal year (2017) in which books are closed.

Following configuration steps are for the latter approach.

Step 2
Switch on the indicator ‘Year-dependent’.

Illustration
Maintain No. of posting periods as ‘4’ for Fiscal Year 2018. 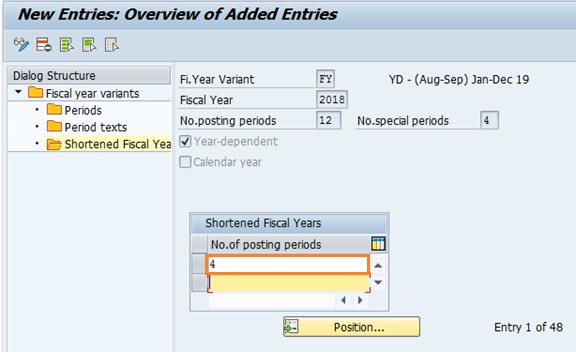 Step 4
Maintain Periods for Calendar Yr. starting from one calendar year prior to the calendar year in which the oldest asset was activated in company code till the year preceding Shortened Fiscal Year.

Illustration
Maintain Periods for Calendar Yr. starting from 1882 to 2017. Assuming the oldest asset activated in the company code 5000 is on 02-Mar-1883. 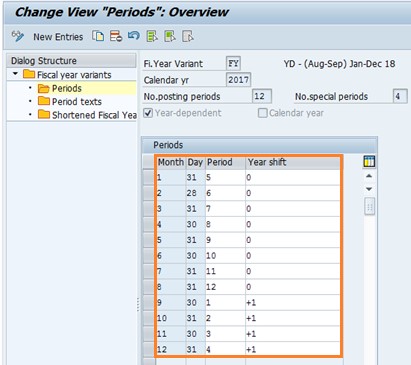 Step 5
Maintain Period Text for Fiscal Yr. starting from one fiscal year prior to the fiscal year in which the oldest asset was activated in company code till the year of Shortened Fiscal Year.

Illustration
Maintain Period Text for Fiscal Year starting from 1882 to 2018. 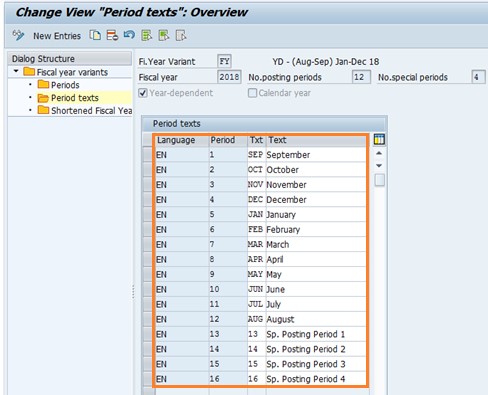 Illustration
Maintain Periods for Calendar Yr. starting from 2018 to 2038. 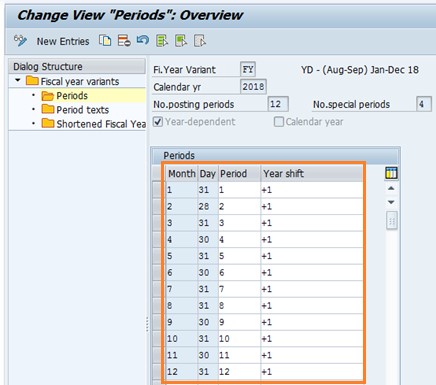 Illustration
Maintain Period Text for Fiscal Year starting from 2019 to 2038. 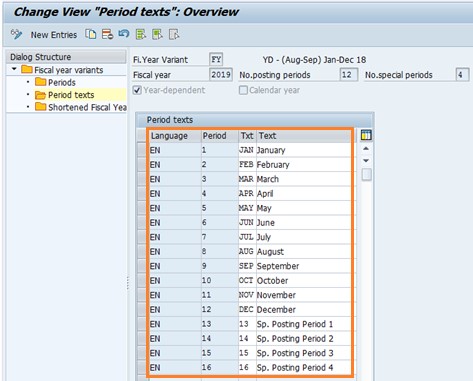 Note:
SAP ERP requires the definition of fiscal years and posting periods per calendar year even when the shortened fiscal year is closed. For this reason, it is mandatory that the indicator ‘Year-dependent’ in fiscal year variant FY remains switched on in future forever.

Regulations or the law determine in each country whether annual depreciation must be reduced in a shortened fiscal year or not.

Illustration
Following are the possible approaches to calculate depreciation in Shortened Fiscal Year;

Approach 1: The ordinary depreciation in SFY 2018 is not reduced. Depreciation is calculated evenly over 4 years of useful life.

Approach 2: The ordinary depreciation in SFY 2018 is proportionally reduced and the balance depreciation of 2018 is planned in fiscal year after 4 years of useful life.

Approach 3: The ordinary depreciation in SFY 2018 is proportionally reduced and the balance depreciation of 2018 is smooth over left 2 useful years.

Following configuration steps are for the Approach 2

Make sure ‘No reduct. in short year’ is not checked for Depreciation Keys under relevant Chart of Depreciation. If this is checked, depreciation is not reduced for a shortened fiscal year despite the existence of other system settings done in the above step. 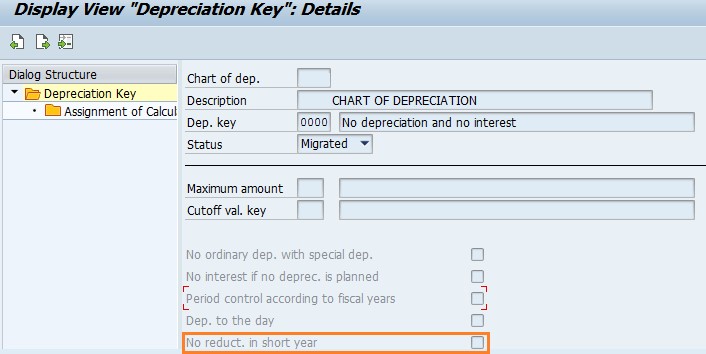 Step 3
Make sure Depreciation Key status is set to ‘Active’ and not ‘Migrated’ as recommended in SAP Note 584443. Otherwise, parameters of the previous depreciation and calculation keys are referred.

Step 4
Implement program ZRUMPF from SAP note 123026. Execute the program after configuration done in Transaction OB29. This sets the field T093C-XRUMPF used internally by the system. If not set the depreciation is not reduced.

Note:
Program ZRUMPF ends without displaying a message nor creating an entry in a transport request. Hence, this program needs to be executed in each system.

Step 5
Adapt Period Control Rules of fiscal year variant after the configuration of shortened fiscal years has been imported.

For Standard Period Controls (01 to 16 and 21 to 24)
Generate Period Control Rules (Transaction OA84) for fiscal year variant FY 3 times with; 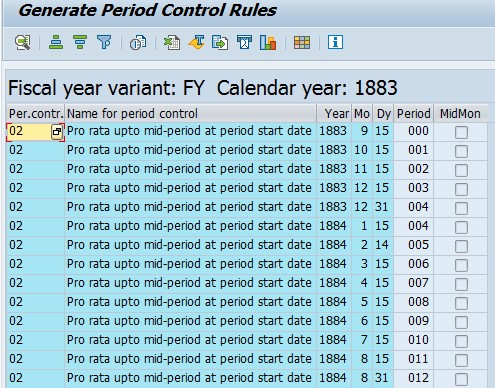 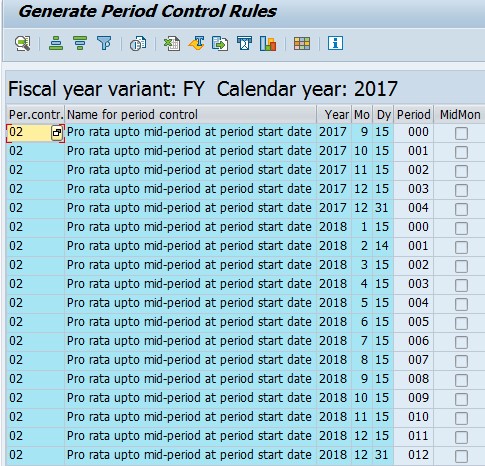 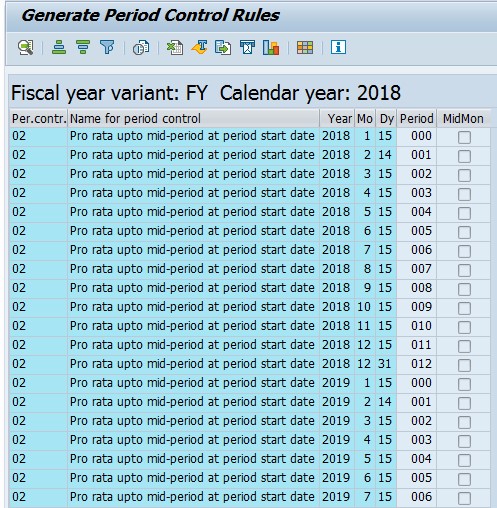 SLO Analysis
Once the decision to change the Fiscal Year is done, system analysis is to be obtained from System Landscape Optimization (SLO) team. They will provide a Guide for shortened fiscal year change based upon analysis and specific to system version.

Initially SLO analysis will be done on quality system and later production system.

Configuration and Implementation of SAP Notes

SFY configuration to be done in the system along with implementation of required SAP notes.

At least two rounds of testing to be done;

Cutover Activities and Go-live
Following activities are to be performed post SFY configurations are moved to Production before Go-live;

This blog discusses only on configuration relating to finance.  There are certain configurations to be done in other modules also. Even finance may require additional configuration depending upon the SAP version and existing setup.

Hope you find this blog helpful.