The new Jupyter operator brings interactive Python Notebooks into your SAP Data Intelligence pipelines. Script your notebook directly in the pipeline and deploy exactly the same notebook and pipeline into production. No need to script in one place and to copy / paste the code into a Python operator.

Learn how to use the operator with a Machine Learning example, that forecasts multiple time-series in SAP HANA using the embedded Automated Predictive Library.

With Python you can implement a million things, other than Machine Learning by the way. Data retrieval or data preparation or just two further uses cases. The Jupyter operator was released in the first quarter of 2021 with SAP Data Intelligence Cloud, version 2013. Currently (April 2021) this functionality is not available in the on-premise release.

To implement the code in this blog, you also need to have access to a SAP HANA environment, which has the Automated Predictive Library installed. The trial of SAP HANA Cloud currently does not include that Automated Machine Learning library.

This hands-on tutorial assumes you are already familiar with both Jupyter notebooks and running basic graphs (which are also called pipelines) in SAP Data Intelligence. If you are new to the tool, you might benefit from the “Get Started” portal.

Let’s keep it simple at first, with a very basic example. Use the Jupyter operator to send a signal every few seconds.

Open the “Modeler” and create a new, blank graph. Drag the Jupyter operator onto the canvas and give to it an “Output Port”, named “out”, of basic type “string”. Connect the output port with a Wiretap operator.

In order to open a Jupyter notebook to script in Python:

Set the “Notebook File Path” to: ping. Then save and run the pipeline.

With the pipeline running, you can now open the operator’s User Interface, the notebook.

The notebook contains a lot of sample code, which gives a good introduction. Have a read, but eventually delete all content / cells to continue with the next steps.

Enter this code into a cell. Save the notebook and run the cell.

Look into the Wiretap and you will see the time of your SAP Data Intelligence Cloud environment.

Now change the pipeline, so that the Jupyter operator responds to data received on an input port. Stop the running pipeline and add an “Input Port”, named “in”, of basic type “string” to the Jupyter operator. Also add a “Constant Generator” in front, and set its mode to pulse, so that it sends a string every second.

Save and run the pipeline again. Open the Jupyter Operator’s UI as before. Replace the existing code with:

Remember so save the notebook and execute the cell. The Wiretap is now receiving and outputting the time every second. This approach allows you to keep code in your notebook that is not required for productive use. For instance keep any testing code in the notebook, just don’t flag it as “productive”.

While the pipeline is still running (with the default of “Productive” set to “False”), select the cell and click “Mark cell as productive”. This adds the “productive” tag to the cell. Save the notebook.

To run that code without your own intervention, stop the pipeline and change the Jupyter operator’s “Productive” status to “True”. Save and start the pipeline.

Now in productive mode the notebook cannot be opened anymore, as the code is supposed to run without manual intervention. SAP Data Intelligence automatically runs the cells that are flagged as productive. You can verify this by looking into the Wiretap. The Jupyter operator is sending the time every second on its own now.

By the way, the Notebooks is saved on the file system of SAP Data Intelligence. You can see the exact location by searching for the notebook’s name in the System Management’s “Files” tab. 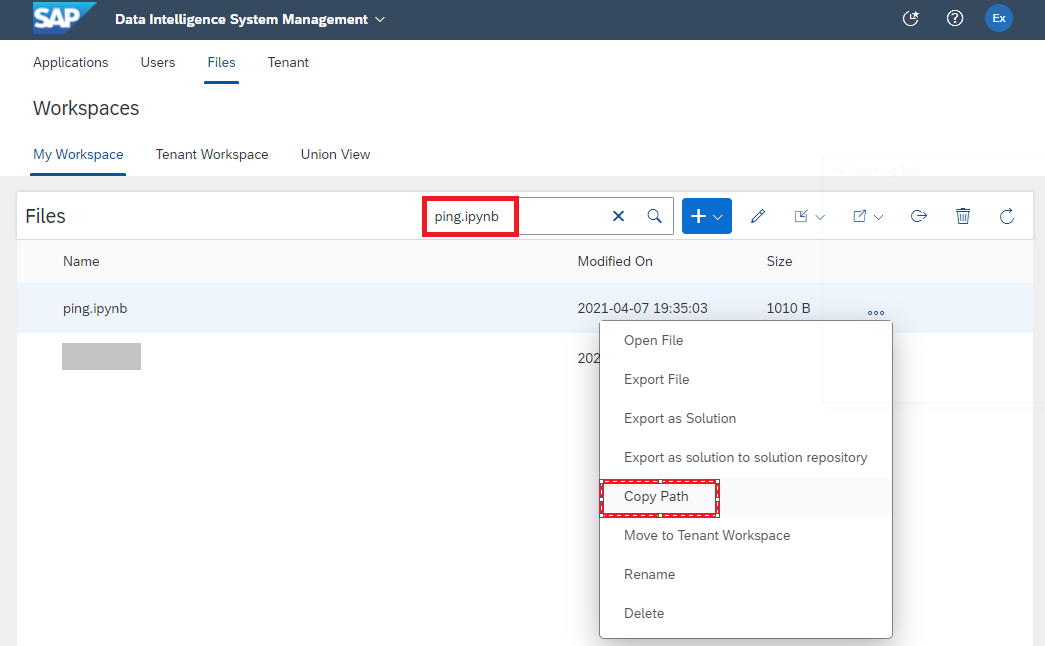 At this point you are familiar with how the Jupyter operator works. Now use it to forecast multiple time-series. Time-series forecasting can be used for many different purposes, from demand forecasting to financial planning. You will use SAP HANA’s Automated Predictive Library to forecast the daily number of vehicles that are driving by various locations in the city of Zurich. The city has a number of automated counters installed and provides the numbers on their Open Data portal (German speaking only)

Download the file VEHICLECOUNT.txt and upload it as table to SAP HANA. I prefer to use Python and the hana_ml library for this uploading step. Below is the code needed when running the code in a Jupyter Notebook of a Machine Learning Scenario in SAP Data Intelligence.

Load the data into a pandas DataFrame. Note that the column that contains the month has to be converted into a Timestamp type. This example assumes that a SAP Data Intelligence already has a connection called ‘MYHANA’ to the SAP HANA system.

The Jupyter operator already has a version of the hana_ml library installed. However, for the time-series forecasting I want to use a newer version than the one that currently comes out of the box (April 2021).

Just go to the Repository tab and create a new DockerFile that installs the necessary version.

Add the tag jupyter_hana_ml and build the DockerFile.

Now to the real thing, the forecasting:

As quick test, save and run the pipeline. Open the notebook’s UI, Delete all existing cells and check the hana_ml version with the code below. In case you see a warning about an lzma module, you can safely ignore it. Also mark the cell as productive, as it will be required when running the pipeline unsupervised.

Establish a connection to SAP HANA, using an existing connection from SAP Data Intelligence. Flag the cell as productive.

Obtain a list of the locations where the cars are counted. These are the individual time-series / segments that will be forecasted. Flag the code as productive.

Display the locations / segments that were found. This code does not have to be flagged as productive.

Before creating and saving new forecasts, drop old forecasts from the target table, if it exists. Flag the cell as productive.

Create a pandas DataFrame to the store quality indicators of the created time-series. We will store for each time-series the Mean Absolute Percentage Error (MAPE). Flag this code as productive.

Trigger the time-series forecasting. For each time-series, retrieve the individual history (from April 2020 to mid March 2021) and predict the daily number of vehicles for the following 7 days. The forecasts are created by the Automated Predictive Library, which is also used in SAP Analytics Cloud.

The predictions are written into the target table VEHICLECOUNT_FORECASTS_SEGMENTED, whilst the pandas DataFrame keeps track of the model quality of all time-series. Also flag this cell as productive.

If you got that feeling, that these forecasts appear to come from out of nowhere, then you might be interested in this explantion of the logic behind the automated time-series forecasts.

Running this cell will take a minute or two. When complete, display the collection of MAPEs. This cell is not required for productive use. 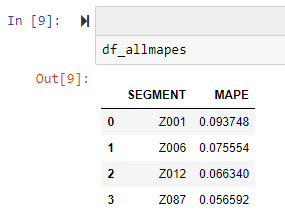 Plot the history and prediction of a single time-series. This cell also is not required for productive use.

Save the notebook and pipeline.

Everything is in place, to deploy the pipeline. In productive mode it would already drop previous predictions from the target table and fill it with the latest predictions.

We will just extend the graph a little, so that the Jupyter operator passes the collection of MAPEs to the output port, for further processing. Let’s send an email to the Administrator with information about the forecasts. Similarly, the information could be saved to SAP HANA or even directly to SAP Analytics Cloud for monitoring and analysis.

Stop the pipeline. Add an “Output Port” to the Jupyter operator, named “out”, of basic type “string”. Add a few more operators.

Add this code to the “Blank JS Operator”

Configure the “Send Email” operator by adding your SMTP server details into the operator’s connection. Also specify a recipient’s email address in the “Default To value” option.

Now just add the code to the Notebook, that passes the collection of MAPEs to the output port. Start the pipeline to be able to open the Jupyter notebook. The operator should have the “Productive” flag still set to “False”.

Open the notebook and add these lines. Flag the cell as productive and save the notebook. You can run the cell, but this will trigger the subsequent operators, including the “Graph Terminator”. Be careful, as once the graph is terminated, you cannot use the notebook anymore and you might lose unsaved changes. 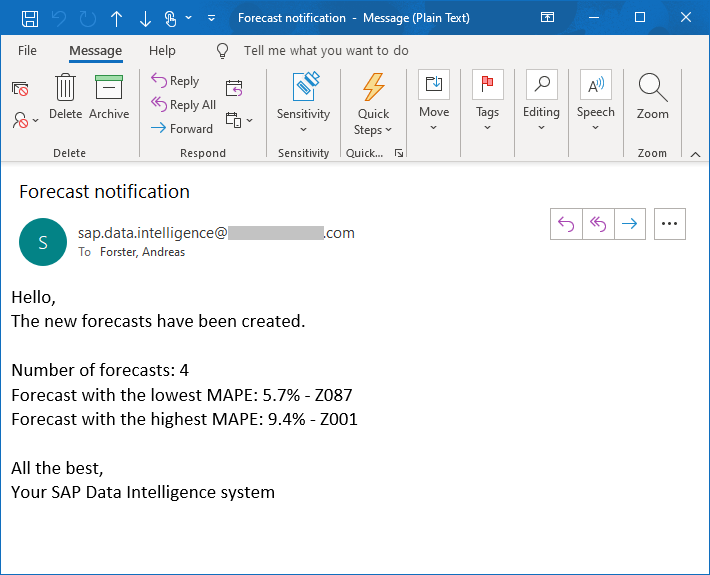 Schedule this pipeline and your forecasts will stay up to date.