ABAP Programming model was ever-changing over the years as Business needs and changes in technologies.

To understand RAP in a better way let us try understanding ABAP Evaluation and its previous Programming models.

As shown in the above figure we have mainly 3 major milestones in ABAP evaluation.

As we have seen ABAP Programming models depend on the ABAP Platform it is very important for us to have a clear view of different ABAP Versions.

This model works from ABAP Platform >=7.5.

By using CDS (Core Data Services) based annotations can develop Fiori apps without any UI5 coding or less.

When we have ABAP Programming Model for Fiori what makes further interest to evaluate.

SAP wants development to be completed from one editor or one place.

RAP provides an efficient way to build enterprise-ready, SAP HANA-optimized, OData-based Fiori UI services and Web API s. It is the evolutionary successor to the ABAP Programming Model for Fiori. 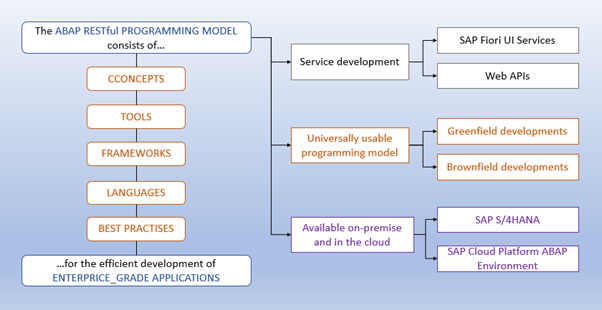 The 3 Key Players in this model were.

Developer can do more focus on business logic than technical aspects.

SAP club together all development platforms under one editor and one screen by using Eclipse ADT.

In this model, BOPF is not required to do transactional Processing in Fiori apps.