As the amount of data increases daily during this time of digital transformation, being able to update existing analyses with new data models is key to achieve speed in making data-driven decisions.

Today, there is greater flexibility in model repointing. With the new enhancements to SAP Analytics Cloud, users can choose to include additional measures or dimensions in their new model, as long as this new model contains the exact same measures and dimensions as their original model. With that, users can also conveniently preserve existing configurations of the widgets in their story.

This brings an easy and seamless experience for users when changing data sources of their pre-existing stories. What is more, users can leverage the additional measures and dimensions in their new model to do further data-analysis!

Let’s get started with a story example!

Brent is a Sales Manager at Teal Kitchen, a new online store that sells a selection of premium Kitchen equipment, including Toasters, Waffle Makers, Air Fryers, and Mini Blenders. As Teal Kitchen is still in its early stages, the online store only ships orders to Los Angeles and Vancouver.

Brent wants to be able to make data-driven decisions to help steer Teal Kitchen in the right direction for growing its product selection to expand. Thus, he utilizes SAP Analytics Cloud to analyze sales data and get specific metrics he’s interested in learning about for sales in Los Angeles and Vancouver.

Using the data obtained from past sales transactions, Brent creates a model which measures data retrieved for sales from January 2019 to June 2020:

Here is the story that Brent initially built to learn more about some specific KPIs he is interested in:

On the other hand, Anna is another Sales Manager at Teal Kitchen. At the end of Teal Kitchen’s second year operations in December 2020, Anna wants to measure the impact of past promotions on sales and the growth of new customers.

Furthermore, Anna wants to reuse Brent’s story. Therefore, Anna needs to replace the data model that Brent had used in his story since it does not contain all the data she requires for her additional analysis.

Image 5: Displaying columns 10-19 of Anna’s model, including the three additional data columns which can be leveraged as new dimensions later.

Anna can replace Brent’s data model with her data model because her model contains the exact measures and dimensions as Brent’s model.

In Brent’s story, Anna navigates to Data and selects the data model icon: 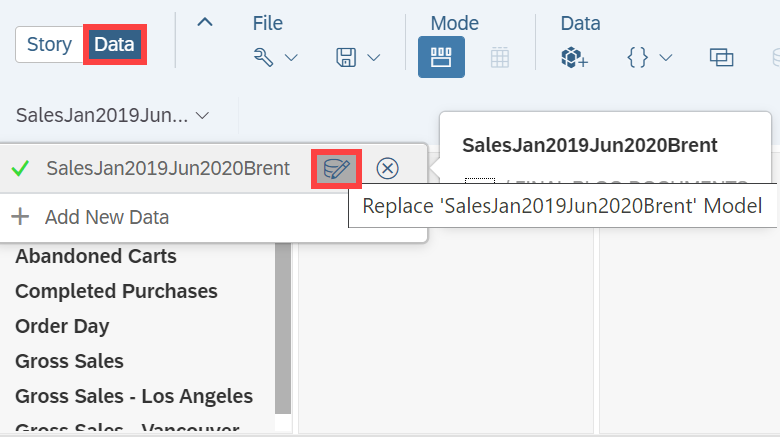 A pop-up appears for Anna to select her new data model, along with a reminder about model repointing: Once Anna selects her model called “SalesJan2019Dec2020Anna”, another pop-up appears:

Here is the updated story with Anna’s new data model:

Image 6: Showing the updated story with data until December 2020. Any new dimensions can be leveraged to create new charts.

As previous chart formatting and configurations were preserved, users can avoid losing work. Anna can save time by not having to re-create any of the charts that Brent had already created. Instead, she can focus on creating new chart widgets for her analysis and leverage the additional data from her new model as new dimensions.

Leveraging the new dimensions, here is the updated story including new metrics Anna has created to learn more about online sales at Teal Kitchen:

Image 7: Anna’s final story in SAP Analytics Cloud, including the new charts she has created to measure specific metrics of her interest with relation to sales promotions and growth of new customers.

What a convenient way to update models within existing stories!