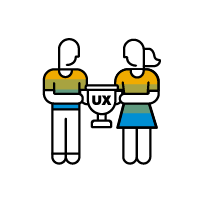 Using a combination of listening, empathy, design thinking, and IT prowess, Keith Haggard, Sr. ERP Business Analyst for User Experience at Johns Hopkins University (JHU), and his colleagues simplified the time approval process with two simple new apps that they were able to build, test, and deliver in around one month. The users of this new app feel empowered and have new capabilities that require little training. This blog post is the story of the collaboration between IT and the business, and an example of what it takes to be a UX champion, or in this case, a UX champion team.

A culture of teamwork led to success

The Johns Hopkins culture emphasizes the value of a good user experience (UX). They speak about this often at SAP conferences, sharing examples of their design thinking process, feedback loops with users, willingness to innovate, and their completed projects. For this project, a broad collection of IT experts participated in finding the problems, building solutions, and implementing them. IT leadership also played a critical role in creating a culture of direct communication with end users and active collaboration. 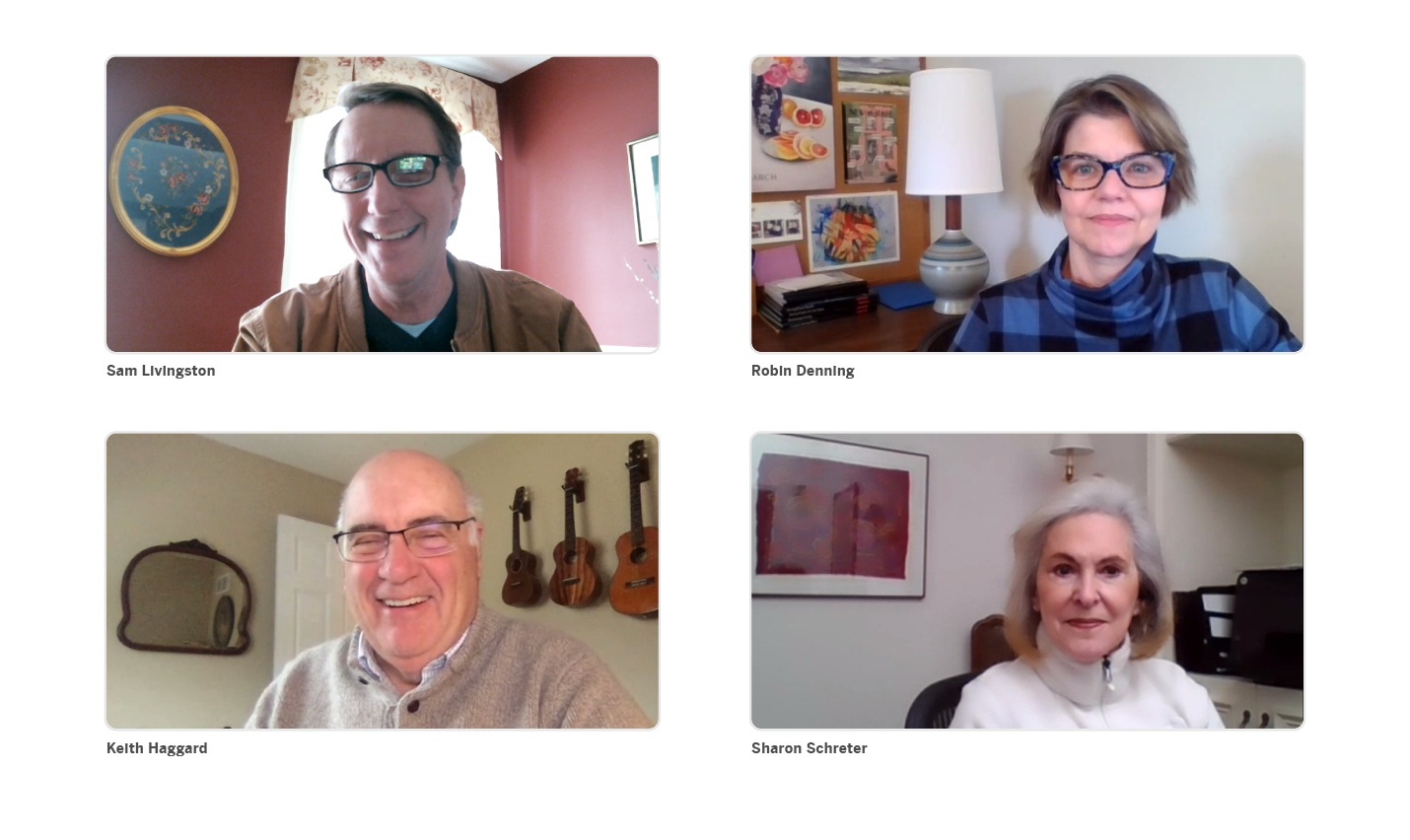 Here is a partial list of the key roles involved in this project.

As an educational institution, JHU has many student workers who must log their time to receive their pay checks. Since students often work in several different jobs, their time entry must reflect this. In addition, many students are part of work-study programs, which place strict limits on work hours. So, accurate reporting is extremely important to ensure both timely payment and compliance with work-study rules.

Students are supposed to enter their time into an SAP system, which JHU introduced in 2016. A poor user experience with confusing screens led most students to enter their time on paper and give the timesheet to their supervisor, who had to enter the time into the system and then approve the hours. In fact, an internal audit showed that only 10 people, out of hundreds of student workers, used the time entry system as intended.

The approvers had difficulties as well. Most are not HR professionals and only use SAP once a week to approve student employee time. The approval screen had many fields which weren’t needed and only served to complicate the process.

Neither the students nor the approvers are expert users who can be expected to navigate complex screens with dozens of entry fields. A summary of the UX issues related to time entry appear in the table below.

The need for simplification was clear

Both the HR and IT staff knew they needed a better process. The goal was to offload time entry from the approvers back to the students themselves. The team identified several problems that they wanted to solve. 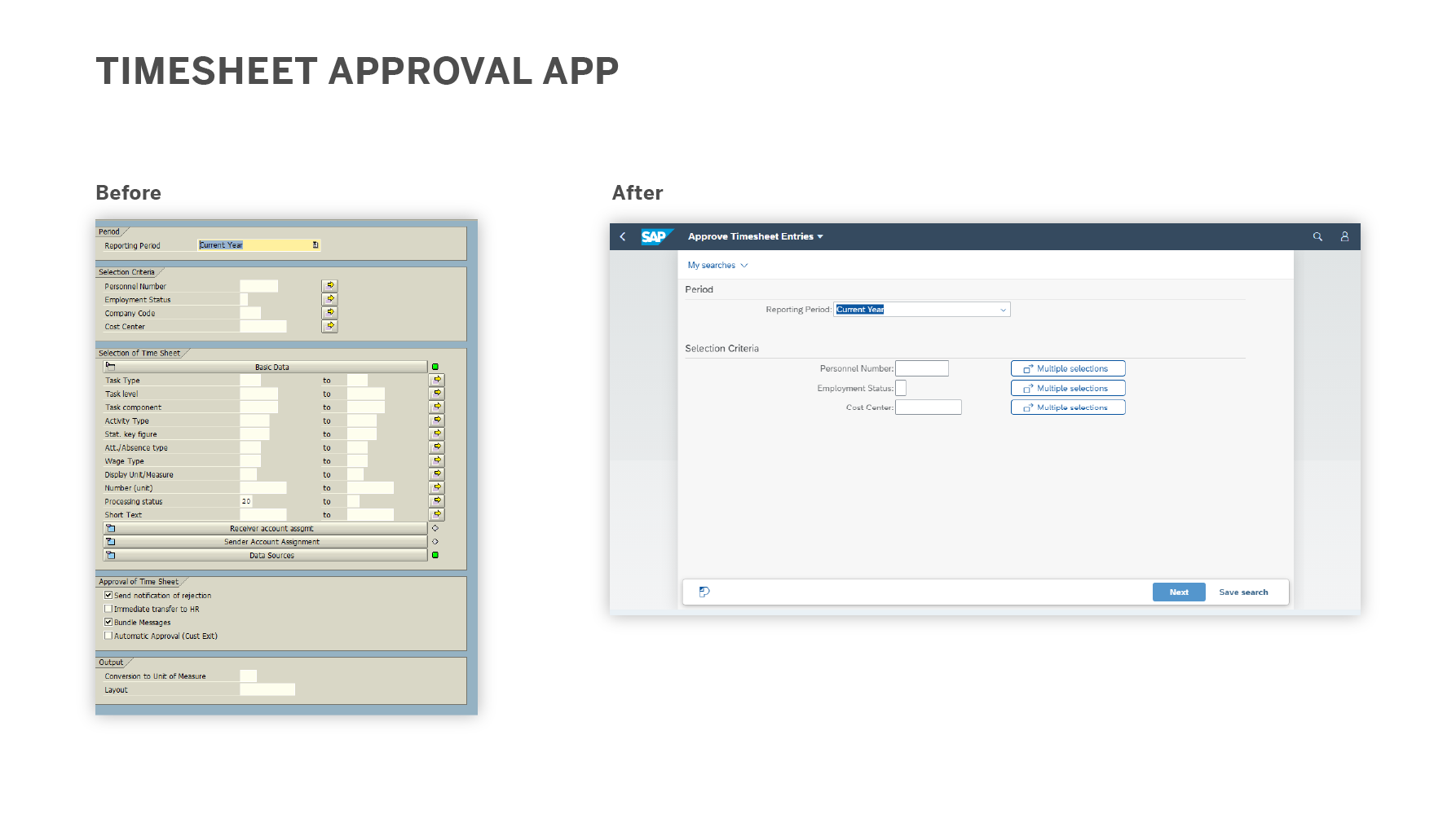 The new timesheet approval app is much simpler – and it runs on mobile devices.

In addition to the technical issues, the complex screens also created problems on a human level. Many of the approvers felt intimidated by the screens and, as a result, did not feel good about themselves or their ability to complete the work. In many cases, they did not know who to call for assistance, since they did not work with the SAP support teams. Training was sparse, often passed down as tribal knowledge from person to person.

Since the overall scope of the problem was relatively small compared to broader enterprise IT issues, this would not have made the “top 5 list” of IT issues that would be scheduled for a fix in any given year. But, when IT learned about this situation, it seemed like a quick and simple win, so they started thinking about a solution.

Initially, there was an organizational separation between IT and the students who used the time entry system. Various approvers reported problems, but IT needed a way to obtain insights directly from the students and approvers. The line managers were able to arrange for the UX experts to observe students and approvers using the SAP system. Watching students try to enter data made it very easy to understand the problem with the existing approach and why people reverted to using paper. Watching approvers making approvals made it very easy to understand their challenges and highlighted the need for a simpler approval process.

Since much of the project was completed during the COVID pandemic, the IT team met with users virtually via screen share. They would have done in-person observation if it would have been safe to do so. Their focus on asking “why” led them to the importance of search functionality for the approvers.

With a solid understanding of the problems the users were facing, the IT team built some initial prototypes. Within three iterations, they had the final product. By taking the time to work closely with all the different user personas, they were able to create the new solution from idea to full production in 4-5 weeks.

The observation process and talking directly to users led to some new insights. In addition to the time entry process being confusing to both employees and approvers, it was difficult to run reports on that data. No one mentioned this during their initial interviews about time entry. The issue only came to light after clean data was in the system and people were not able to analyze it easily.

Students who did not get paid would ask the project lead why. Usually, the first question back to them was “did you enter your time?” There was not an easy way to look this up, which was unfortunate as the time lookup process is used over 1000 times per year. The original process involved using an SAP transaction called CADO, or “display timesheet.” The IT team would not have learned about CADO unless they watched the users doing their work.

The culture of 2-way communication rather than someone submitting an IT request and waiting for the result made it much easier to deliver a solution that fully met the users stated and unstated needs. Better understanding on both sides led to a solution that addressed everyone’s requirements. The IT team is always interviewing users, surveying them to learn user pain points, and going deeper to understand why people need what they are asking for.

Now, people access the time entry system with simple apps that they access from tiles in the SAP Fiori launchpad: one for employees to enter time and one for approvers to verify time entry and approve time. Both groups of users feel empowered, as they are confident with the simplified apps. The new apps did not require any training, unlike the original SAP transactions.

Keith and his JHU IT colleagues made the process easier for student employees and their administrators. Maybe an even bigger win than the nice, new apps was that everyone felt heard and understood by IT. The culture of collaboration, along with the tools and techniques they used, will allow them to continue to deliver innovation to the university community for years to come.

Make sure to also bookmark the UX Champions tag or follow the UX blog tag to catch all the stories in the series.

Wonderful! Thanks for sharing Peter!

To my opinion, a good Employee Experience is getting more and more important!

It supports significantly attracting and keeping the best talents! 🙂

Absolutely right! Anyone entering the workforce today has very high expectations for usability, established by using intuitive apps on their phone for the past decade.

Are there some more hardcopies of the time - entry app showing the process available ?

The app allows people to enter their time and their managers to approve it. I'll check to see if there are more screens they can share.

Thanks for your interest! We started using the My Timesheet  (version 1) in 2016. We hoped it would be an easier way for our student employees to enter their time. We also thought that using it on mobile devices would accelerate the adoption rate. For many students that did prove to be true. This version is now obsolete, but you get more information on it at:

We are currently upgrading to My Timesheet version 3. 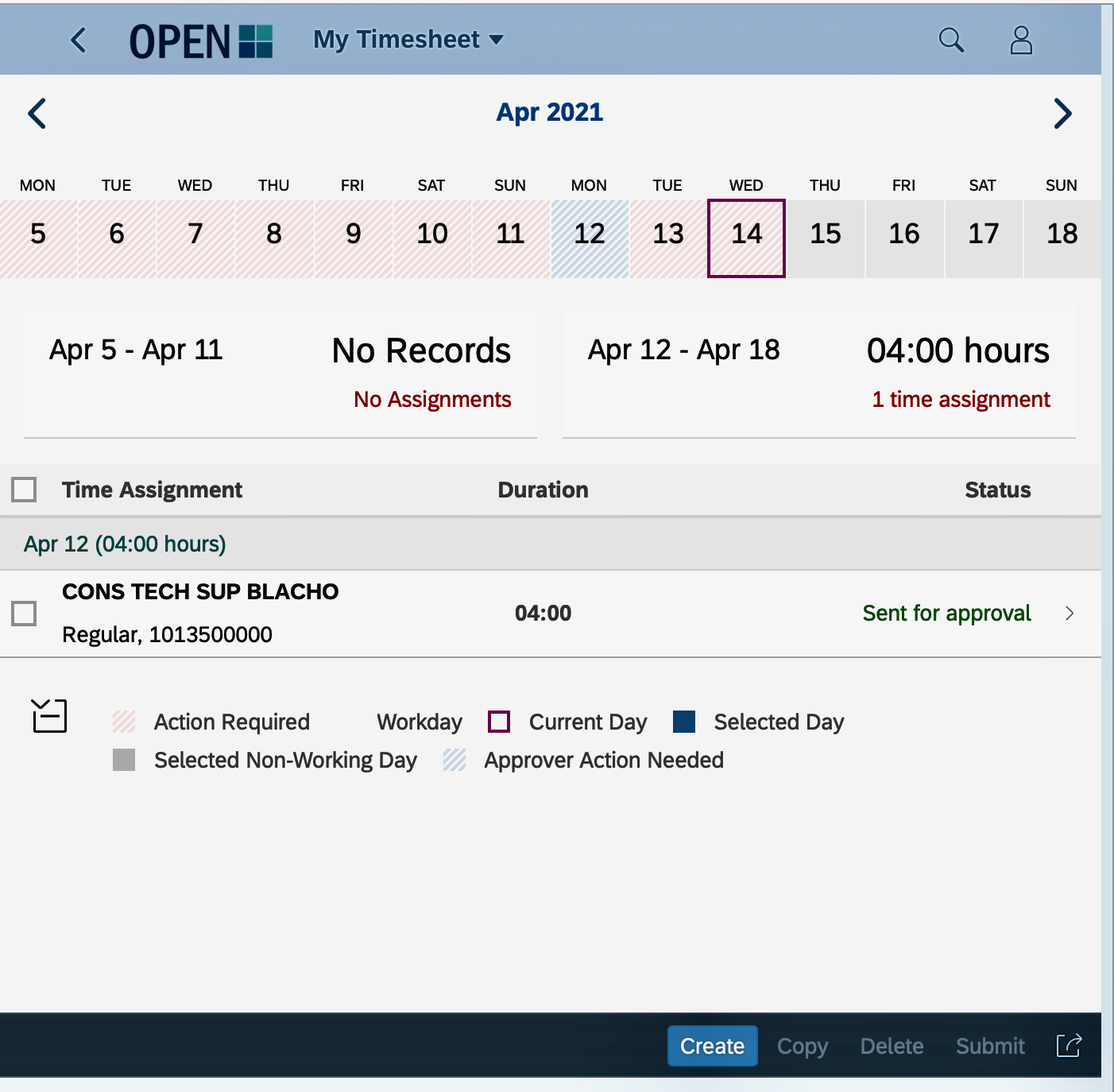