Recently I have worked on integrating SAP PO and KAFKA by consuming confluent rest apis. There are two types of APIs available which are producer(publish) and consumer(subscribe) apis. Kafka rest APIs are exposed to using Azure api management in our Landscape.

This blog does not explain sap po configuration in detail. But explains only overview.

Since there is no in-built adapter available in sap po, to connect to kafka, we have used apis to connect. KAFKA team has shared us the api postman collection, after testing and playing with the apis, we could get an idea on how to desingn the api using rest adapter in sap po.

Producer api will be used, when one wants to produce the messages to kafka topic. Basically you will make api call with post method to send the data to kakfa. I find it producing message using API is straight forward and easy.

Consumer api is used to read the data from kafka topic. Messages will remain in topic for example 2 days or one week based on the configuration.  Consuming messages get little complicated as we need to call almost 5 APIs, when we need to to read the messages from kakfa topic. I ended up creating more ICOs to orchestrate all api calls. Consumer apis have lifecycle which can be found in the documentation. SAP PO interface has to be scheduled to poll the api, as kafka is not capable of pushing the data to clients.

Once consumer is created, client can continue to poll the topic using read record api, no need to recreate the consumer again as long as consumer instance is not destroyed. When you restart kafka server, consumer will be destroyed and should be recreated again.

Commit offset concept is used to differentiate and track the number of read messages by each client. It has two types, automatic and manual. When manual method is used, we dont have to make commit offset api call.

There are five api calls needed to consume message from kafka topic.

I tried to use automatic commit option, but it has resulted in duplicate processing. Hence I had to choose manual commit option. while creating consumer, parameter “auto.commit.enable” has to be set to false, in order to use consumer in manual commit mode.

We can outline the steps like this flow diagram. 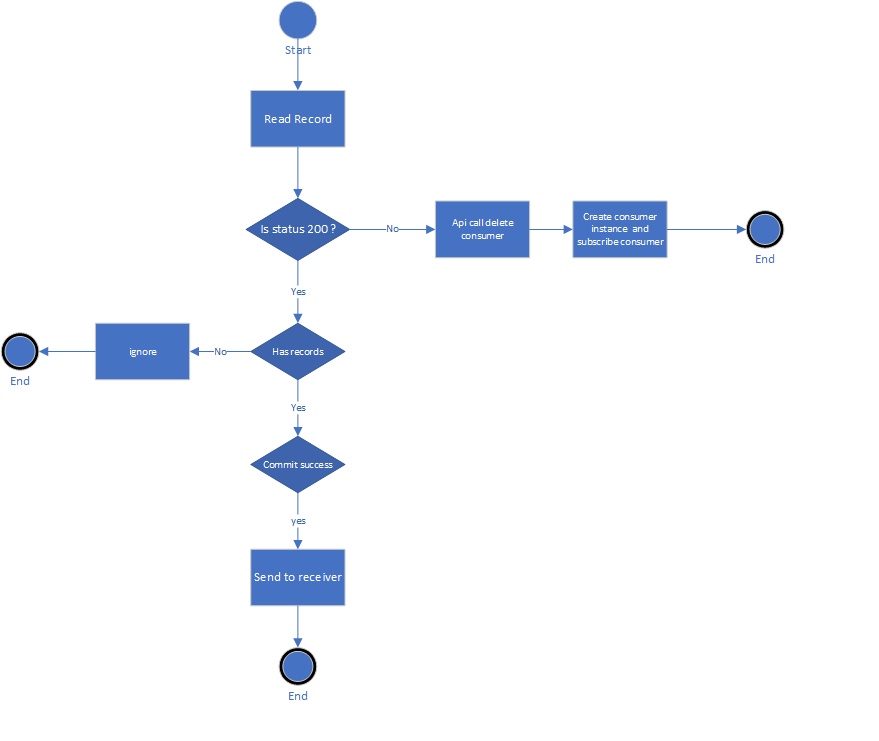 There can be many ways, you can achieve this requirement to consume messages from consumer. You can handle everything in adapter module or java mapping or using separate ico to orchestrate the api. 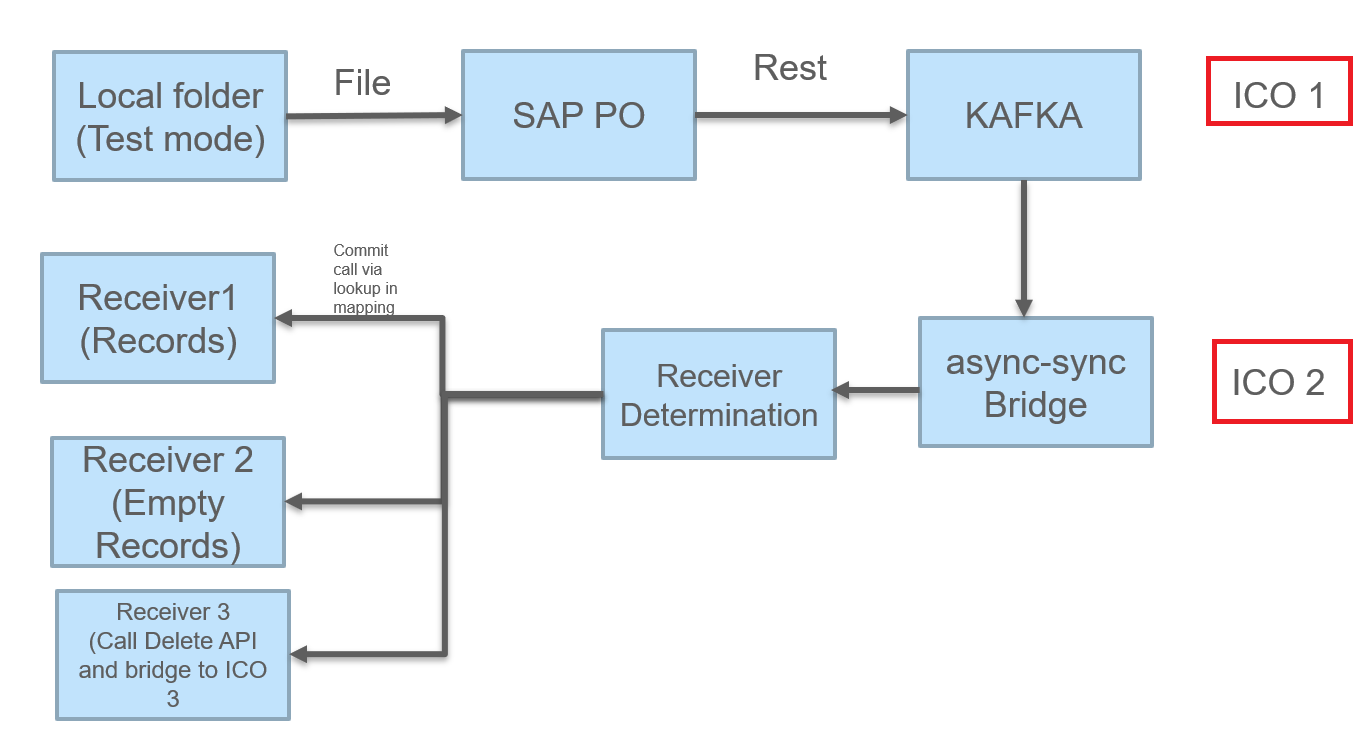 This will be scheduled to run once in 10 mins and sender adapter reads the dummy file in test mode. Rest receiver adapter will call the read records api and send the response to ICO2 via bridge.

Using response code, you can handle which kind exceptions you would like to handle and not handle.

ICO2 will receive the data and it has 3 possible inputs. Based on the incoming payload type it will do the mapping and send to 3 different receiver. Using receiver determination condition, input will be routed to respective receiver.

When ICO 1 runs for the first time, it will return exception with 404 code saying the consumer does not exist. Based on input payload,  ICO2 will determine the receiver which will delete the consumer and call ICO3 to initiate consumer creation. Delete call will not succeed as initially no consumer is present. You can ingore this by handling custom exception handling.

More complexities in my implementation.

In my case, i had to store the cookie value in value mapping and use it for consecutive calls. In all API call (except Create consumer instance api) cookie has to be used in header.  This is because, rest calls will be handled in kafka rest proxy, using two nodes and consumer instance will always be created with particulate node.

Incoming api call will be routed to node using dispatcher. Without cookie, dispatcher will not know, in which node (Either node 1 or node 2) the instance is created.  Let us say, consumer is created with node1 and when incoming api call is directed to node 2, it will throw error saying that consume does not exist.

But if we make api call with cookie set in header, then It will be able to route to correct node and we dont get error like consumer does not exist.

Due to handling cookie and cookie is valid for only 1 day, i had to refresh it once in a day. That is the reason, When ICO 3 runs, it will get the cookie from create consumer api and will store in value mapping. In ICO1, We will check the cookie date, if date is equal to current day, then proceed with read api call else do a loopback to initiate the consumer creation process.

We are in the process of moving to cpi, hopefully, we can make use of cpi kafka adapter.

This is a very useful document.

Please can you help me with the SAP PO integration to read KAFKA topics without using the Advantco KAFKA adapter.