Fiori Client removal from app stores was a buzz few months ago, big enough to make SAP rethink about its phasing out plan: postpone removal date, change distribution channel from (manual) ONE Support Downloads into a Managed distribution through stores (some business steps involved, but easier easier for common employees install on device).

Wouldn’t be nice if they embraced Progressive Web App philosophy into Launchpad roots? They sell as Fiori apps, why not take it seriously as an app platform?

While you and me daydream about it, let’s toy around what we have today.

Few days before publishing I saw this answer from Gregor Wolf mentioning a video from an earlier UI5Con. I saw it quickly (2x speed) and looks partially to what I tell here.

That video also focus on a proper Service Worker; something that I stub here for a reason also mentioned on video: there are quirks to use it on Launchpad. The main one for me, at development view, is being hostage of Framework/Vendor: there is no public documentation / API for Cache Buster tokens and (at the time of video) some UI5 requests were doing synchronous calls that bypass Service Worker. You can reverse-engineer the standard and implement into a functional state. It is unlikely to break between upgrades but the risk exists.

Chrome doesn’t provide a way to manually change its display language on Linux (only ABAP sandbox have English as OS language), so I took the freedom to take Mobile screenshots in Portuguese too (silent protest against poor translation quality in some areas of Solution Manager).

A (very) brief intro to PWA

What? It’s brief to me, three words. That’s not cheating, it’s reuse. Who already heard about this will thank me for not wasting their time.

Ok, I will extend a bit: PWA is a way to make Web Applications (Web pages)  have a “native application” feeling to end-users, and one of those things is allowing them to install it (aka. Add to Home Screen, A2HS), the main focus today.

Requirements to PWA be installable

Read this other page or this one.

Stop with this laziness man!

Seriously, read them. There are common requirements for all browsers, but each one can have a different requirement, because PWA is still a draft specification, even seven years after its first public draft.

Quick story short: to enable installation on Chrome, Firefox and Edge you must have two files declared in HTML: a Web Application Manifest and a JavaScript to register a Service Worker. Service Worker operates in a separate file, you’ll also have to write it and serve it too.

Functional stubs (at least on time of publication) for each resource are provided below for your laziness:
Web Application Manifest

JavaScript to register a Service Worker

Top tip: The easiest way to check if requirements to install are fulfilled is using Google Lighthouse, it pinpoints what is missing and what has error. This example, for example, will stop working in Chrome later in 2021, because it will be mandatory to have a offline mode.

Lighthouse results about our Launchpad enhanced with those stubs.

Now you know that the main focus to enable it lies in HTML and JavaScript running on it. Time to inspect Fiori Launchpad.

To know where to inject files we need to know what HTML pages make part of Launchpad experience. Developer console will aid you, it’s just a filter away.

Two HTML pages are identified: Login Screen and Launchpad itself. Too easy, I didn’t even sweat.

The concept is very simple: ABAP system keeps untouched, we hijack some HTTP requests and inject PWA-related things into response, like a man-in-the-middle attack. Actually it is exactly like that and is legal: a Reverse Proxy doing content rewrite.

The one I used was Nginx, but you should be OK with any other like Apache. The needed features here are Content Rewrite and serve static files (for PWA specific resources).

Put the rules, spawn service and good to go! 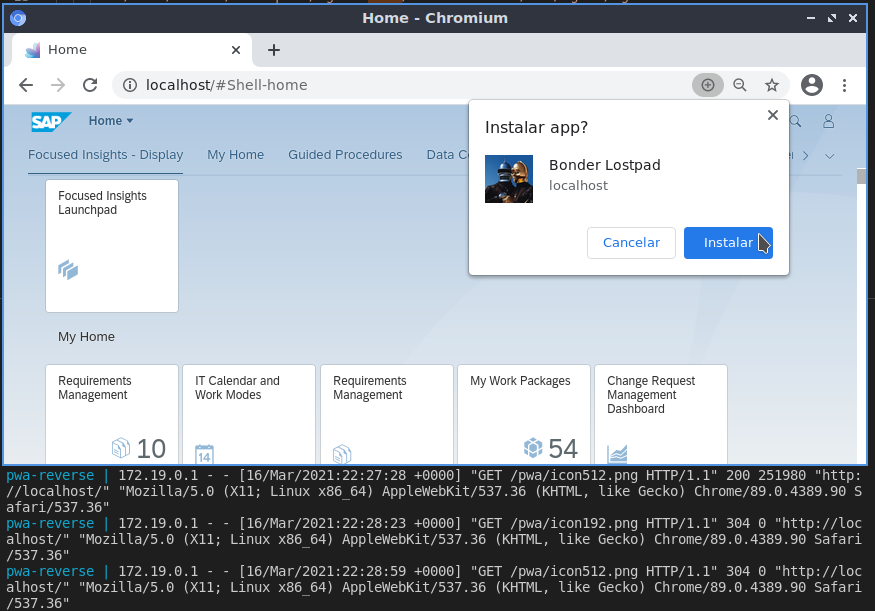 Being installable, you can also have shortcuts for specific tasks (Fiori apps). Don’t expect too much, it is less flexible than native app shortcuts.

“But we’re just going to celebrate,” said me. “Can I Crescendolls ipsum it?” I thought.

Shoot, I forgot why I wanted to blog this. That’s what happens when you stop to listen some robots rocking (those aren’t the ones you are thinking of ). Let’s get back to the program.

Many ABAP landscapes have a kind of Reverse Proxy running called SAP Web Dispatcher. I don’t recall any Rewrite Content feature on it (I could be wrong, it’s not my expertise), but still this software is handled as a sensitive part of Landscape and is out of bounds for a common Developer, the brave one picked in the crowd to make things like this work. Let’s try another approach: patch that in a developer way, there’s nothing wrong with just a little fun.

We saw that two HTML pages were loaded. Login one isn’t really needed to address, because it only makes sense to allow installation for users logged in.

From the other developer folk tale you should now know how to find the link between Fiori and ABAP, and this one is no different. 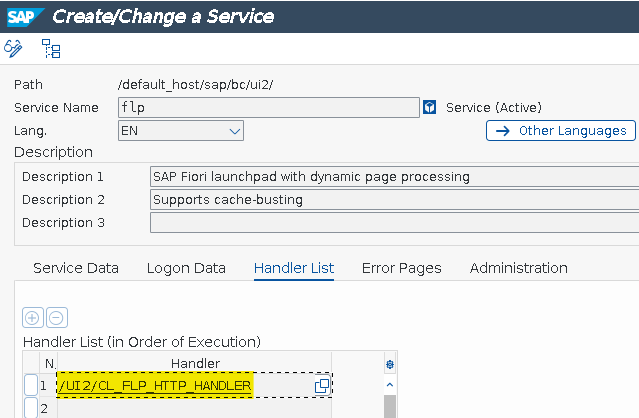 After some effort voyaging around the code you’ll find where SAP render Fiori Launchpad page, precisely at some bits of /UI2/CL_FLP_HTTP_HANDLER class. They even do some content injection on template. 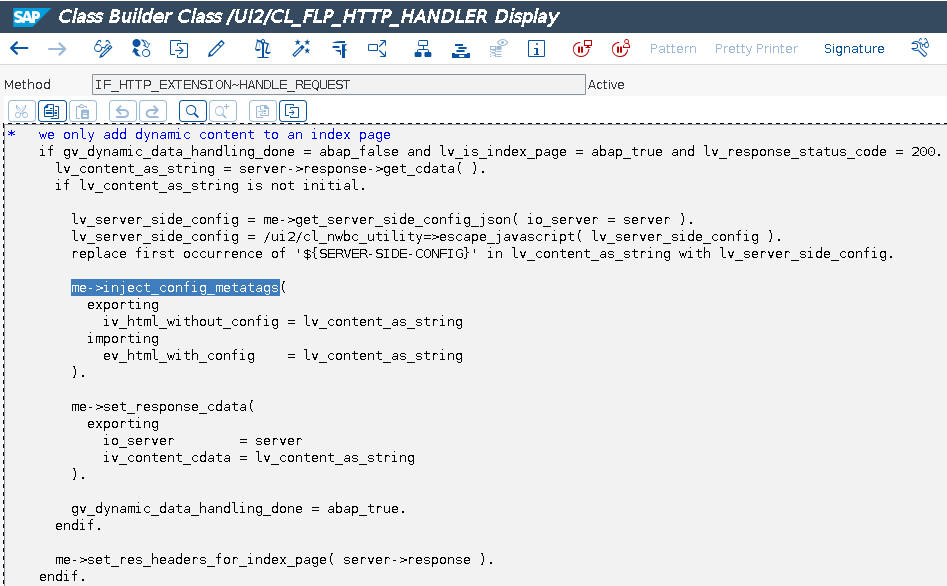 A nice spot to implicit enhancement would be inside of inject_config_metatags method, where standard does content injection into Fiori HTML page.

We’ll take advantage of that aerodynamic part and buff it with an implicit enhancement, our injection.

Refreshing Launchpad you’ll get network errors, as expected, because two new resources were pointed (manifest.webmanifest and app.js) in HTML but ABAP server doesn’t know them, yet.

You can try but you won’t be able to directly create a PUBLIC child node. No worries about that, KBA 2478325 explains a not-so-trivial feature to accomplish this (yes, you could avoid a bit of this creating as a child of an existing leaf, but you would lose all the fun).

Why am I serving from a public node? Nothing special. My first experiments had Login page as part of PWA experience, and then you have to go public (No-user user in action).

A node needs a handler class, time to implement it. I recommend using the MIME repository to store PWA files, because you get a nice API to get it back, either on code (it’s amazing what you’ll find sneaking around API word), or codeless if you know the drill (read documentation).

This is enough. Just load Web Manifest and Service Worker files into MIME and it is ready for the stage. 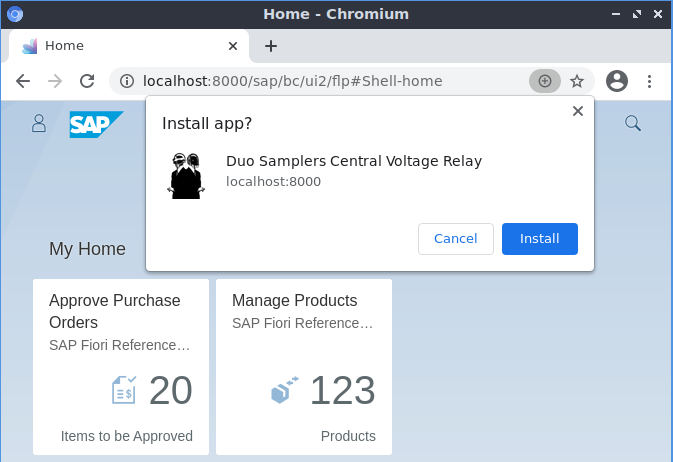 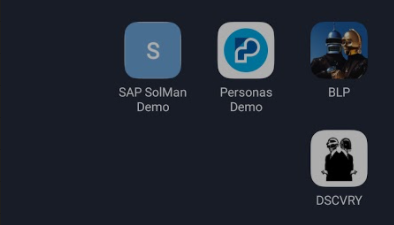 Mobile homescreen after installing both cases.

You could also take both experience and knowledge to a next level, like fiorize installation experience through a Launchpad Plugin. You can toy with other things to improve PWA experience, but you’ll always have to think twice if that requires something that relies on ABAP side: “Am I jeopardizing myself doing that?” “Is that code released for customers?” “Is there a public API for that?” You’ll have to develop, mend, maintain, check on every support package upgrade.

Want the better experience? Be picky and make your company expenses worth by influencing the software, or meet us on some shady corner mumbling about immutable decisions took inside.

As said earlier, PWA is still a draft specification. I wanted to have a different set of shortcuts per user role, but that is not possible now.

A git repo thalesvb/flponprem-pwa is available for your joy. Ready-to-go, one BAdI implementation away to activate this feature, bundled with one example.

Our work is never over, but this blog is. Merci à vous et à bientôt! 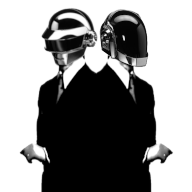 Meta-task: All tracks of Discovery album were referenced in this post, some of them more than once. Why don’t you play the game? (this one doesn’t count).

Brilliant, just what I was looking for. I need to implement a Web App manifest link in FioriLaunchpad.html as it is the only way I have managed to get the Launchpad in full screen on Android with Chrome.

Fortunately Gregor Wolf pointed me to this post of yours.

Hello Thales, not even a month after your blog post, the page you referred to that specified the criteria for offline mode for a PWA was updated with a notice that reads as follows:

"Updated April 14th, 2021: We previously announced plans to update the installability criteria to ensure a PWA actually provides an offline experience. After listening to your feedback, and discovering a number of issues, we have decided to put those plans on hold. We strongly believe providing a valid page when the user is offline is critical to providing a good user experience."

So, thankfully, (for now) that is not a requirement.

Fortunately, providing an offline experience does not necessarily mean providing a fully functioning app. It could just be a custom fallback page, as they point out.

Yep, but is still important.

At least all standard (and real UI5) Fiori apps that I work with they all (don't) handle offline state (and act) as a sever error, throwing multiple flavors of "Please contact your system administrator". So handling offline at FLP level is a must to avoid unnecessary calls to support. 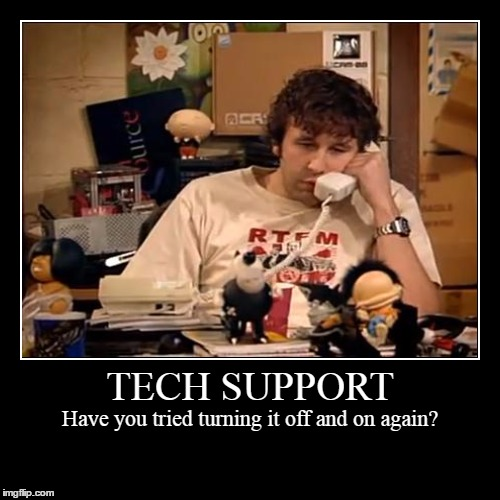 But the tech support guys are lonely and just waiting for a call.

At least the guy in the picture does.

Hi, it's me again. I just wanted to add something related to the service worker.

My problem is twofold: Firstly, I know little to nothing about service workers and, secondly, I obviously didn't read this blog post well enough.

My problem, that I discovered after implementing this solution, was that calls from UI5 were going to the back-end twice, and the service worker somehow seemed responsible, from what I could tell in the network trace in Developer Tools.

The problem, it seems, is, this service worker implementation that I had found somewhere else and had copied and pasted blindly:

I have now just used a fetch event handler as per this blog, where the callback function body is empty, and I think this solved the issue. (Expect another comment from me if it doesn't).

I've some questions about your blog which opened my mind. With my colleague we are trying to activate the launchpad as PWA.

I try to recap

Hello Thales, thanks for the answers.

EDIT: we did some steps forward, and we are getting this error

Seems the scope of the WS does not match with something but Not sure where...

Thanks again for your patience. 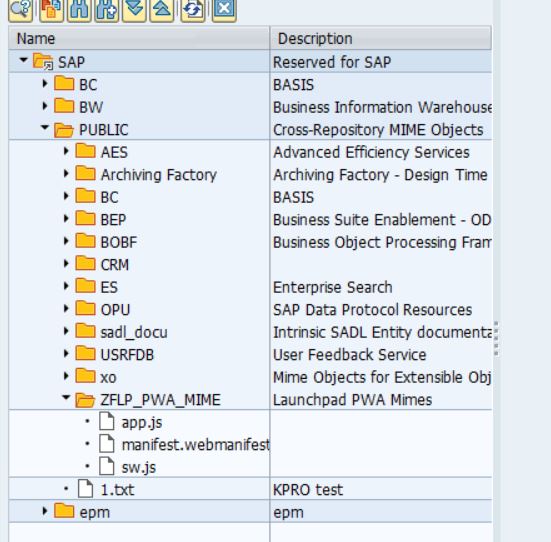 I found out why you had this scope error, the snippet for handle_request method was not the latest version I generated to this blog... my bad.

When it is processing to load sw.js file, the ABAP server should also return a Header field named Service-Worker-Allowed. You should put something like:

Now we have the issue that Martin reported above and is that the SW is called twice. But we are at a very good point.

Thank you very much, you deserved a fresh beer!

Hello Salvatore, I would be interested to know what was the cause in your case.

In my case, I could see OData calls going to the back-end twice, but when I changed my SW implementation to have a blank fetch implementation as per my January 11 comment, the problem was went away.

(Sorry, in that comment I posted the problem code, not the solution code).

your code worked to avoid double SW installation. We didn't catch the route cause and we didn't have odata called twice. Another point, SW was not always installated twice, but randomly.