Performance of Alt+F8 in Eclipse ABAP Development Tools and ABAP 7.52

TL;DR With the little modification I propose, it will take less than 1 second. But the code applies only to the versions I mentioned above. I recommend to only use it for Developer Edition (private trial) and use it at your own risk.

If you just want to try it for version 7.52 sp 1, go directly to the Use it chapter. If you want to adapt the tool for the Developer Edition 7.52 sp 4, read the next chapter to understand how I did it, and hopefully you could then propose a Pull Request.

How I did it

After searching the support database, I found out that the Note 3006480 – Where-used list is not working could contain a fix for this problem, but this fix was available only from 7.53, above my ABAP version 7.52. In that note, SAP created a new method GET_METADATA in the class CL_RIS_SHM_METADATA, containing 15.000 lines of hard-coded values (!) used to initialize an internal table.

I decided to try a custom fix in 7.52 inspired by this 7.53+ correction. First of all, I had to understand what these 15.000 lines could correspond to. I ended up by creating a little ABAP program Z_RIS_SHM_METADATA to mimic what is done in the standard class above, which generates the same big internal table. The program is attached to the github project mentioned in the Use it chapter.

I then used the backend debugger on that program and the DVE tool proposed by Alexander Geppart to generate the ABAP code corresponding to that generated internal table (variable LT_METADATA): 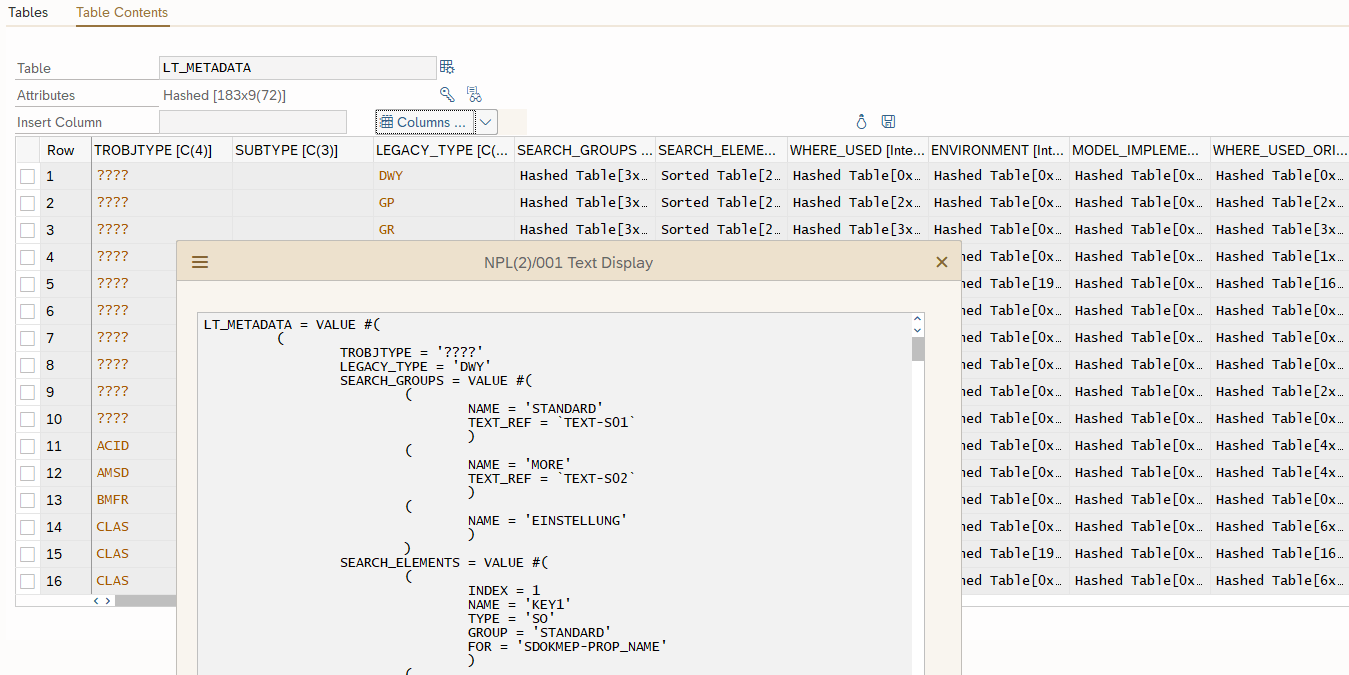 Note that if you experience performance or blank screen issues with the official tool, try my forked version of DVE (still a bit slow, took 4 minutes to display the ABAP code).

I then enhanced CL_RIS_SHM_METADATA. The syntax check didn’t like a so big VALUE #( … ) statement, so I had to split it into many INSERT statements, and at the same time I tried to compress the lines (“find/replace all” of any good text editor is your friend):

In the end, that made the incredible low number of 10.000 lines.

How to use it

If you experience the same Alt + F8 performance issue with your Developer Edition 7.52 sp 1, you may try this fix –use it at your own risk–:

NB: for 7.52 SP 4, volunteers welcome to propose a Pull Request!