[CPI] ConVista CPI Helper: The show goes on. Version 1.2.3 is released and 1.3 in the pipeline

we are close to 2000 Users and so I wanted to provide you with good news for everyone who works with the SAP Cloud Platform Integration.

There is an update for the CPI Helper Plugin in review at the Google Chrome Store that brings some improvements.

How often have you forget to press “Trace” after development? This will not happen again with version 1.3.0 🙂

What is the CPI Helper Plugin?

If you do not know the CPI Helper, it is an open source Chrome Browser plug-in that extends the Cloud Platform Integration with some cool new features that helps you during development of Integration Flows. 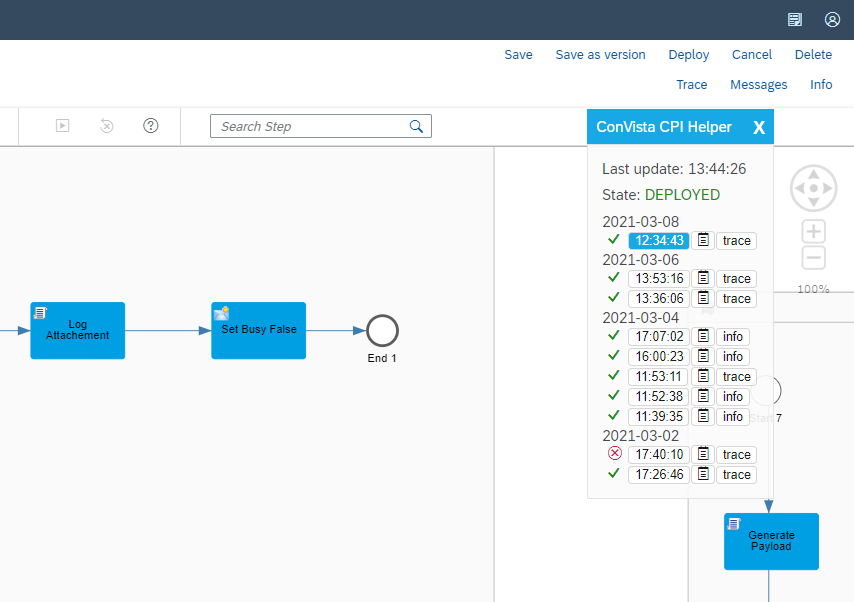 It brings you a button to activate trace and it lets you view trace messages directly in the Integration Flow Designer. Additionally, do not miss the inline trace feature. If you want to know more, you can read my blog posts (here, here and here). You can add it to Chrome Browser with two clicks:

When do I get the update?

Just Google and God nows the answer here. The last review took about 3 weeks. I have no idea what they are doing during that time.

I use Ubuntu and the Plugin does not work for me 🙁

I fixed that with 1.3.1. Unfortunately we are still waiting for the review of 1.3.0 in the Chrome Store. But it will come!

If you find bugs or if you want to contribute, the plugin is open source and you will find more details at my GitHub page

Thank you for your continuing effort and for sharing Dominic!

(I know the feeling when the extension is in review... Best of luck!)

Many thanks Dominic for the hard work on this awesome tool.

Since I know this plugin I cannot live without it anymore. It's a must-have when you are developing in CPI.

Thank you Dominic for the new features!

I have a dev request. Is it possible to add also an option to "enable login active" and make a POST call to retain the current MPLLogLevel? So we keep the session active but not overwrite the desired MPL Log level. (or maybe there is some other API that can be useful)

actually an interesting idea. I can play around with the APIs. Seems like for example the api calls from the message sidebar to refresh it are not relevant for the login session.

I found this chrome extension useful to keep login sessions active if that helps.