RPA as a Data Interface for IoT/Smart Containers

I developed the following use case together with Raik Kulinna from the SAP department for Waste, Recycling and Environmental Services and experts from the container manufacturer at Heinz Bergmann OHG. In this blogpost we will explain you the use case, its benefits and how we designed the bot. The blogpost will be concluded with the learnings gained during developing the automation with the Cloud Studio.

The number of IoT-devices is exponentially rising. While there are already around 27 billion devices in the market, scientists expect this number to triple until 2025. All those devices are able to collect data with their sensors, which need to be transferred, collected and used to add value. The information gained through data can be used to improve efficiency or to enable business processes interlocking perfectly into each other.

In our case SAP Intelligent RPA is used to save, transfer, and process data collected by sensors of smart bins/containers. The whole procedure of controlling and maintaining the containers has been done manually so far. The RPA bot makes use of existing technologies that have not been used yet and enables to fully automate the process of creating an emptying order to make sure the containers can be used at any point in time. 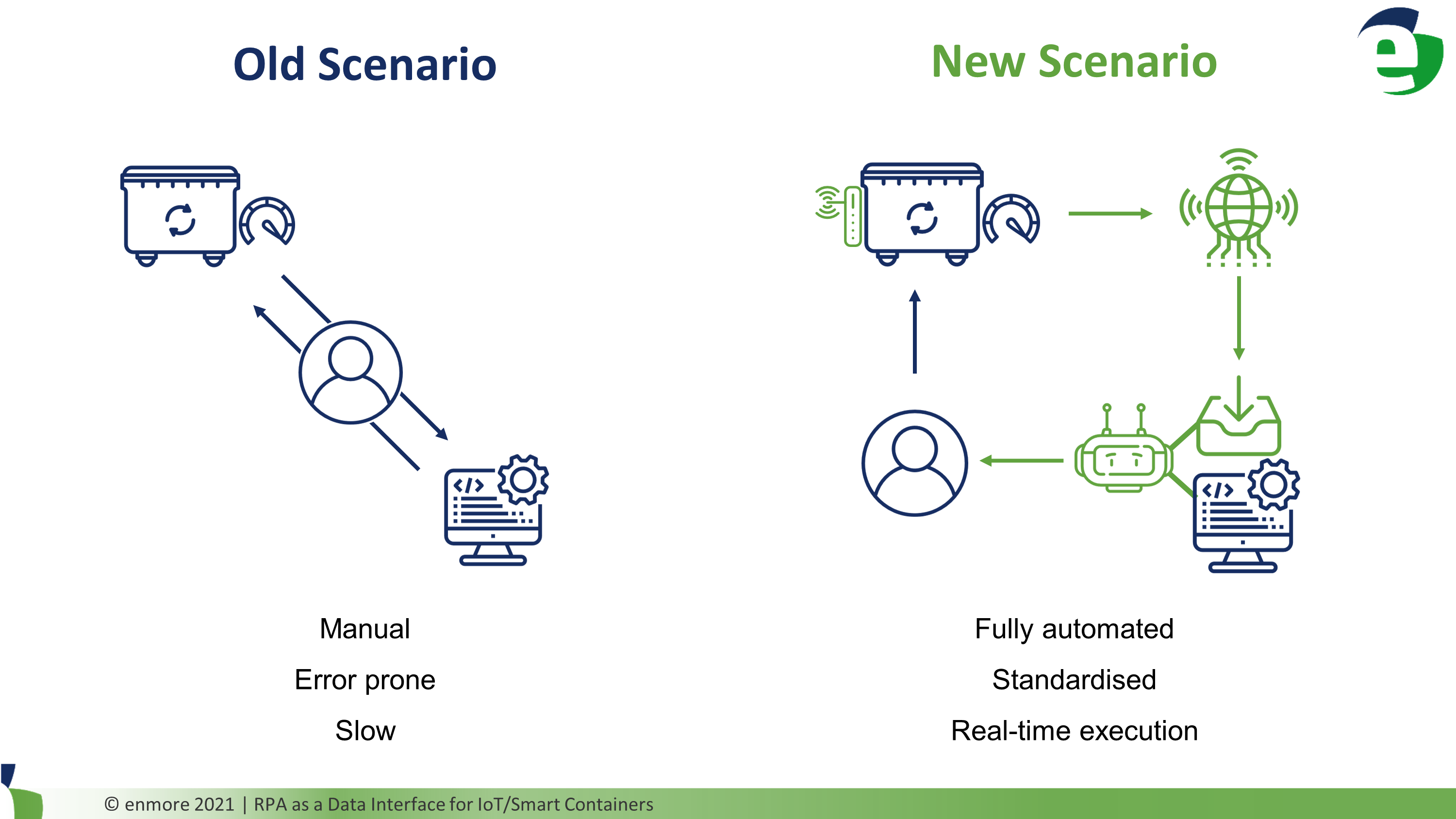 Comparing the scenario before and after bot implementation

The containers have a modem which can transfer data to the IoT Platform of the Bergman Smart Portal. The platform is run by the container manufacturer Bergmann and is able to send emails with status information about the container. From the Outlook inbox onwards SAP Intelligent RPA will handle the process. Depending on the information a Service will be triggered which causes a manual action of maintaining, repairing, or emptying the container.

Similar tasks are usually executed by an IoT platform. For small amounts of IoT devices it is with no means financially viable to set up such a system. The bot was built in 1,5 weeks by only two developers which is unrivaled cheap and fast. When automating processes, it is always a consideration which technology to use in regards of the expenses and value delivered. In this case SAP Intelligent RPA was the technology of choice.

The bot is created to run in the unattended mode. It can be triggered for example daily and goes through all the emails that were sent by the Bergmann Smart Portal. The content in the email body is stored in its different variables and transferred to as well as saved in an Excel file. Before that the bot checks if a file for the related container and its serial number already exists. If so, the new data is added. If not, a new Excel file will be created. In this particular demo we have inserted only one check that examines the fill level. If the fill level is higher than 75 % an empty order will automatically be created in the SAP System. Beside this one, creating additional orders to maintain or repair the container as well as tackling any kind of alerts can be implemented. 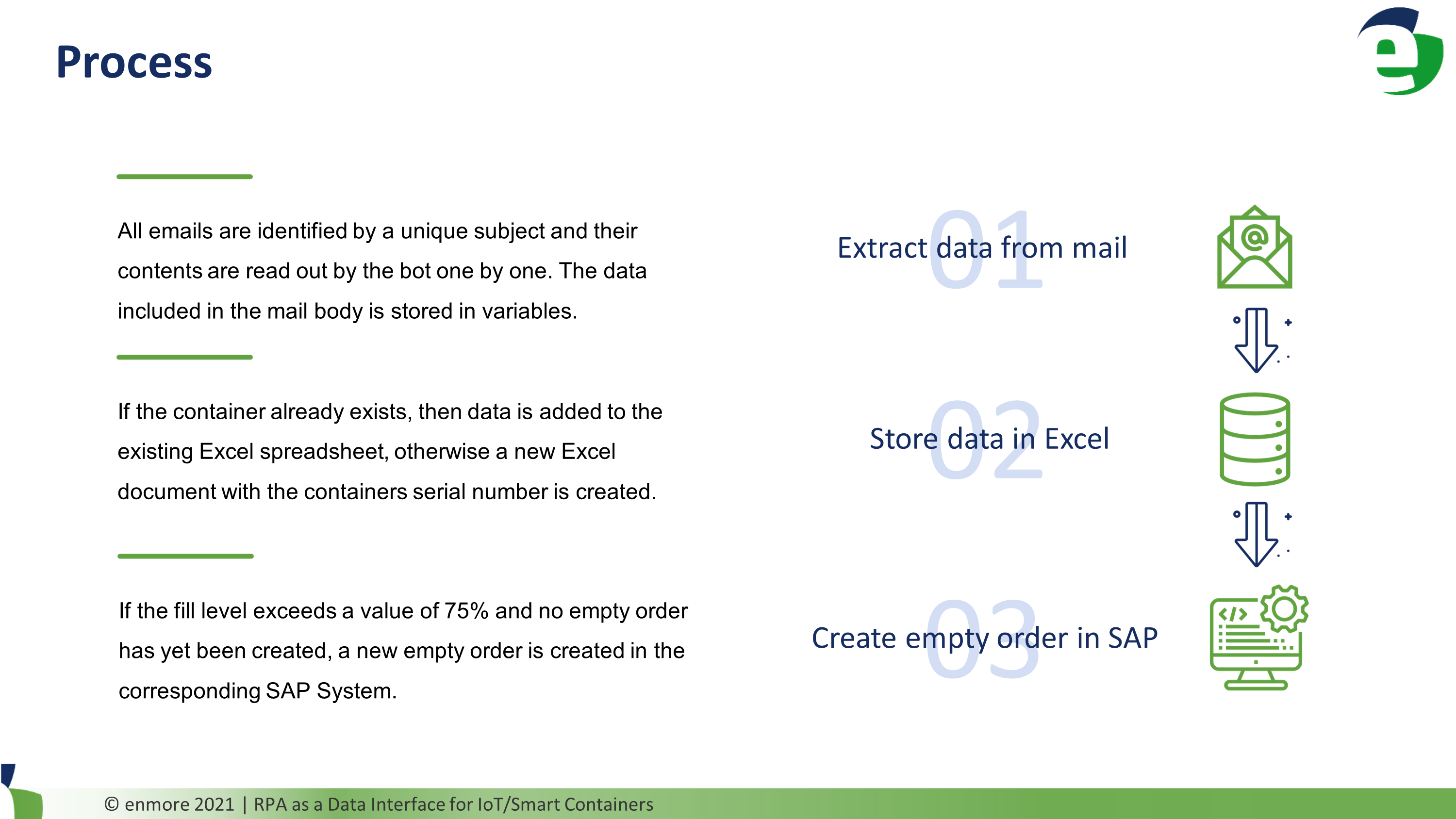 3 major steps of the automation

The benefits of this use case not only result in process improvement but also enable to raise other potentials such as decentralizing knowledge or storing historical data. The historical data can then be used to identify further optimizations. Apart from that the automation ensures that all the containers will be ready to operate at any point in time and no delay due to full or defect containers occur. The demo also illustrates how existing technology can be connected via RPA. Thus, SAP Intelligent RPA assuming the task of a data interface.

In the following picture you can find an overview about the loops and conditions used to develop the process. 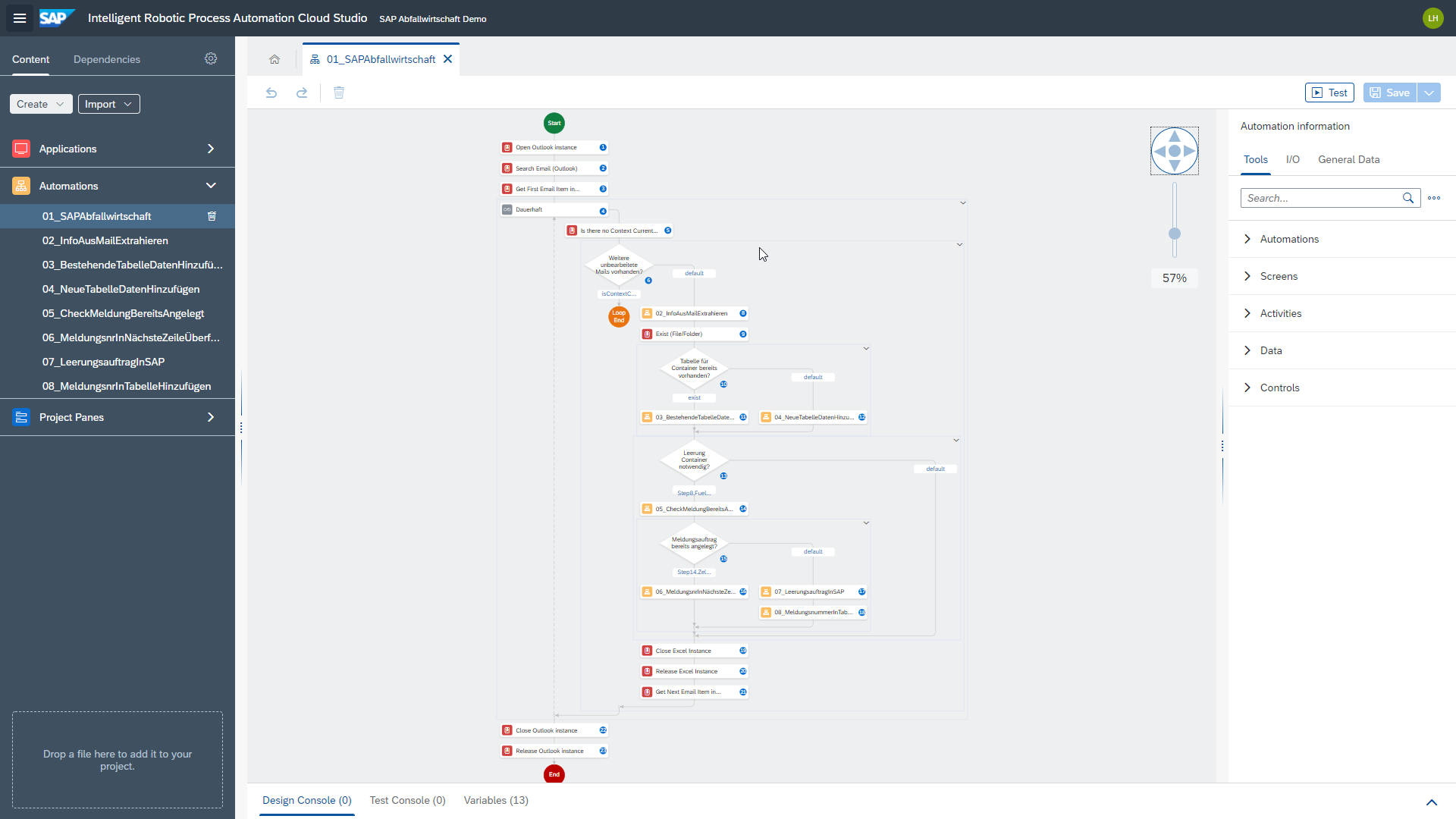 In This demo video we show you how the bot looks like in operation.

The project was the first one we solely developed in the Cloud Studio which was at this point in time just yet released. The documentation was not as broad and detailed as it is now, so we had to learn how to use the tool by trial and error or asking the community for help. We understood how to build a modular process, pass variables, and use controls such as loops and conditions. We highly recommend the modular approach. It helped us to test different sections and allowed us to work on different steps of the automation when problems occurred on others. It definitely improves speed, quality and the overview about the whole process.