From Evolution To Revolution – A story about networked economy

125 000 years ago, our planet was inhabited by several human species, some of which started moving from the African continent, populating earth over the course of the following years.
With limited abilities, leaving home was extremely risky and for a number of reasons, the only species surviving what I like to call the first globalization, was as we all know … us, homo sapiens.
The Neanderthal, however, was far more adopted to survive in the rough climate of the northern h h hemisphere, as to his physical capabilities. Homo sapiens was the weaker species of all sapiens 2M years ago.
The biggest challenge for those nomads was to make sure, there is enough food (actually more than what was needed if the tribes had decided to ‘do nothing’ and stay where they are, just hoping for more…). As technology and thus, hunting techniques were not so far advanced as to hunt bigger animals, wild horses were the favourite animals targeted by both, Neanderthals and Homo Sapiens.
Now, let’s look at the different technologies used by both species:
Neanderthals were hunting alone or in small groups, the result was stable over time and it required always the same effort
Homo sapiens, however, organized themselves to join forces, going for a shared goal, sharing experiences and dividing roles & responsibilities, thus maximising ROI
Comparing these two, it becomes obvious that one species was set up not only for survival, but to grow and finally become the one and only human species on earth

Pre-historic examples of what we call “art” reveal that homo sapiens formalized their hunting techniques in an effort to share information about how to be successful hunting animals, e.g. where and how to find them, which weapons to use or how to organize in a larger group to hunt them down.
Also, the pre-historic animal killing artist used those paintings to report on successful hunting campaigns and to draw a vision of future hunts.
This is what we call the “cognitive revolution”. The first time in the history of mankind, “information” was created and used to scale abilities and capabilities across a larger community and over time.
Now it becomes evident, how the physically weaker species homo sapiens could survive and grow over time, as opposed to the Neanderthals who did not undergo this “revolution”, continuing to leverage their capabilities on a local level.
Now, here is the “revolutionary” element we were trying to find: a structural change or “consequences” with new capabilities – we call this “innovation”. 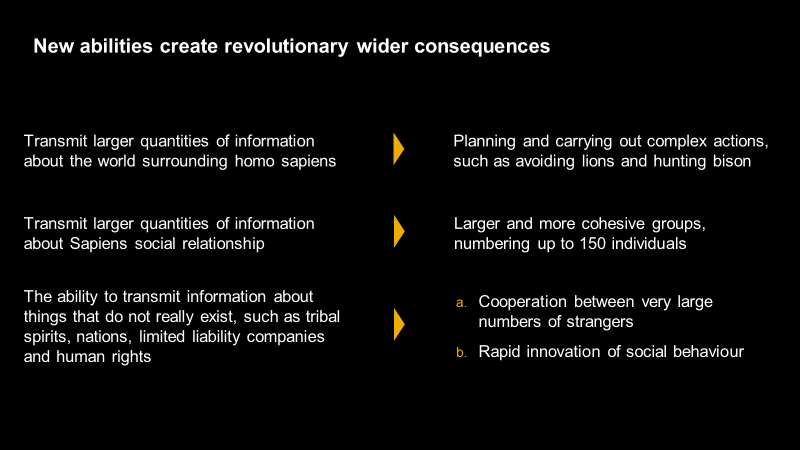 Technology helped homo sapiens to transmit larger quantities of contextual information, which allowed for the precise planning and execution of complex actions
Sharing social information led to work and live in larger and more cohesive groups and even more though, the creation of what I’d call an information meta layer or a reference, cooperation between tribes fueled and accelerated innovation.

In our modern world, success is inevitably based on these three things:

1. Alignment of a larger stakeholder groups (e.g. companies and their suppliers) on a common set of goals: You don’t tackle your business problems and your challenges on your own today, because as a company, you no longer act on your own, you are actually part of a value network. Networked companies understand that only scalable supply chain planning capabilities which involve many business partners outside of the “tribe” will lead to sustainable and profitable business.
2. The capability to scale the quality of relationships, helping to reach these goals effectively: Customers need to understand how important true E2E scenarios are, especially in Supply Chain. Leveraging supplier relationships to tackle internal or external supply chain challenges requires a solution which eases supplier on-boarding and allows for collaborative problem solving – just like our advanced horse hunters did.
3. The ability to consider information from “the outside” or from “elsewhere” for the decision-making process: Suppliers have a lot of knowledge and very relevant insights about our customer’s markets. Being able to leverage these insights means to know under which conditions, success is more reachable for companies, hence, reducing risk and or increasing revenue. Again, these capabilities require an integrated solution so as to ensure scalability at reasonable costs.

Where do you see companies join forces with their business partners ? How does cave art translate into companies’ digital strategy ?

I am looking forward to your comments !

Very good information for app developers. These hybrid tools make it faster to develop the app for all platforms simultaneously. The features will improve slowly over some time. Still, it is a good start for developing apps faster

At the technology level we are growing very fast.  We're sharing ideas, different techniques and even sharing app code.

However, to keep the big/small accounts, it still makes sense to be the one to stand out.  You need to find something that makes your company unique.  Why go with ACME Co instead of ABC company?  Is it only price?  Not really.   There is a lot more that goes into it.  So we have to carefully consider what to share and what not to share.

So yes, I can see a new revolution with data. We weren't even able to share at the global level 20 years ago.   We really didn't see sharing ideas until around 10 years ago.  And lately we've shared apps.

Excellent Story-Telling, JHS. I like the way you brought together what seem like two very different ideas, and show their similarities. All communities get stronger by sharing, all businesses get stronger by communicating externally with their customers, suppliers and other partners. Those that don't: well, how many Neanderthals do you see around today?