One of putaway strategies in standard EWM is called “Storage Behavior: Flexible bins”. The documentation for this feature describes the customizing steps nicely. What is not described there, is the main idea, the concept of this feature. This is, what I try to formulate bellow.

The standard concept is working with a network of cells of same size (x & y dimension). This network can be used to create new flexible bins of different sizes, consisting from 1-n adjacent cells. It is obvious, such bins are more likely directly on the floor, in a warehouse area without any fixed racking structures.

A bin can for example be named as combination of

You define the pattern for these bins in transaction /SCWM/FLEXBINAREA:

These bins are created either:

1. during confirmation of a WT (bin in a specific format is entered in NLPLA)

2. by a Badi during creation of a WT​

Option 1 needs to create primarily a putaway WT without specific NLPLA bin (see “WT Generic” in customizing of Storage type).
However, it is hardly possible the user could correctly specify the name of the newly created bin using above described logic (specifying lower left and upper right cell of the bin he’s just used for putaway…) 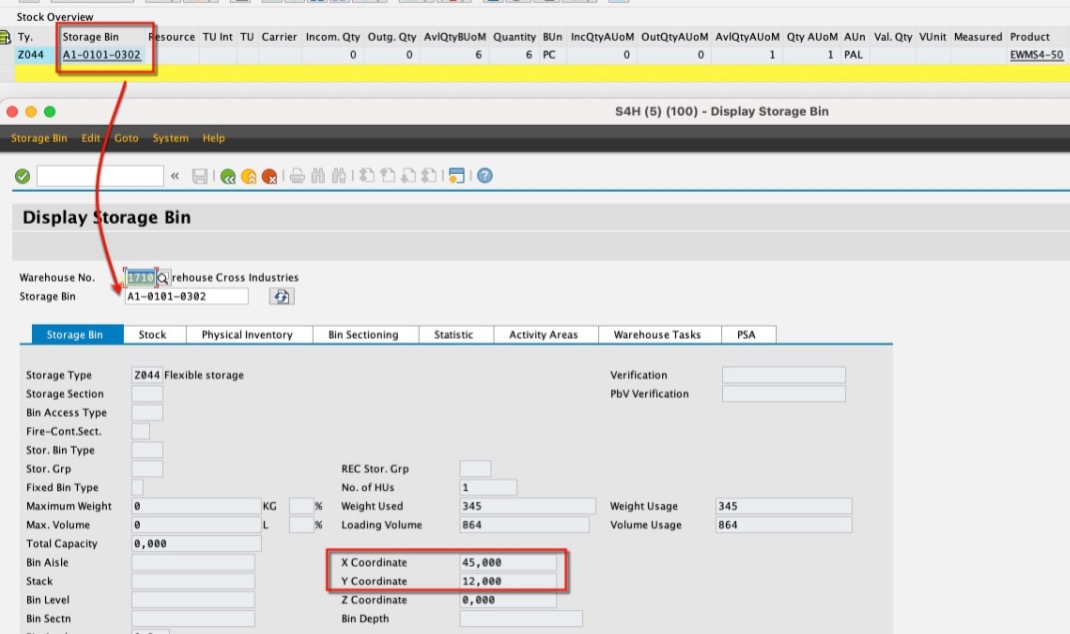 Option 2 is more likely to be used. The logic in the example code for Badi /SCWM/EX_CORE_DYNBIN_DESTBIN tries to determine the next available cell in the network, and to find how many adjacent cells are needed for putaway of the certain WT item.
It is only pity the number of cells is determined on hand of length and width of the basic UoM of the product being putaway(…), instead of using of measurments of the HU for example. But, it is only an example code, of course. You are free to engage with your own logic. 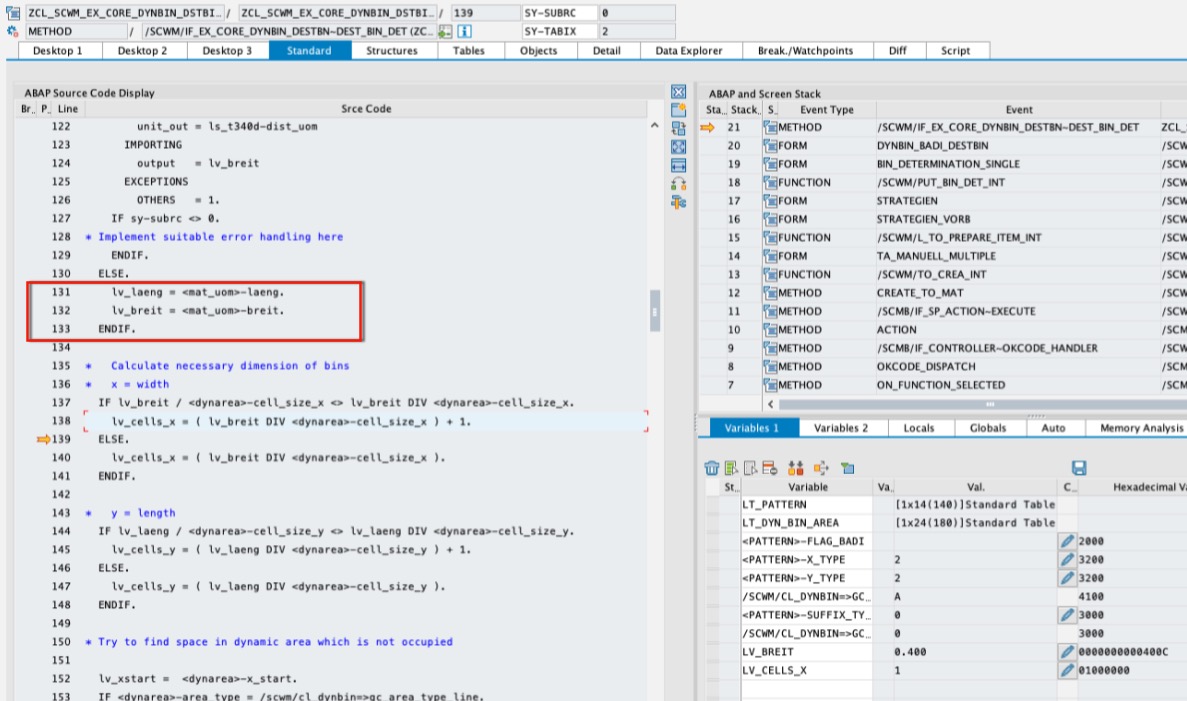 Determination of the new bin size in number of cells

It is, again, a bit tricky to imagine, how this new bin code will be confirmed on RF… There will be probably no bin label to be scanned in this case. More likely in this case the destination bin will not be required in RF (by customizing of confirmation control).

when being emptied, at least in standard. Freed cells are available for composition of new bins again.

There is a bit mismatch in terminology around this topic. Although “Flexible bins” is used in the end-user interface, the main class is /SCWM/CL_DYNBIN and also in the code is mostly referred as “Dynamic bins”.
This can lead to mistakes, as the term “Dynamic bins” was rather used in WM, in case of bins in interim storage types 9xx, which vere automatically created and deleted by system. These bins, however, were used only technically to distinguish for example original Purchase order number, but did not represent a physical area in the warehouse.

This is really cool (useful) functionality, and your description helps to understand potential of this solution. I guess there no checks in standard that bins are not overlapping?

I guess it can be used in custom dialog where you can move / rotate your "planned bin" with buttons, something like keyboard arrows. Could be used for example in container storage.

well, the Badi searches for new bin containng cells which are not ovelapping. If a bin is confirmed in the 1st scenario, if you confirm WT with a bin which overlaps with cells of another bin, you get an E message.

Thanks for the blog, I need to set up this concept, but I don't know how maintain Flexible Bin Pattern and how maintain flexible bin area? Could you please give us some help with example if possible, thanks a lot 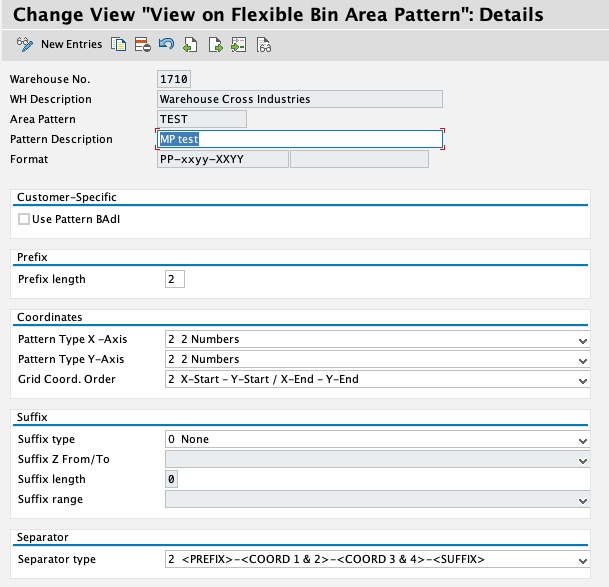 /SCWM/FLEXBINAREA - Enter starting coordinates of the area, number and size of bin segments in the area: 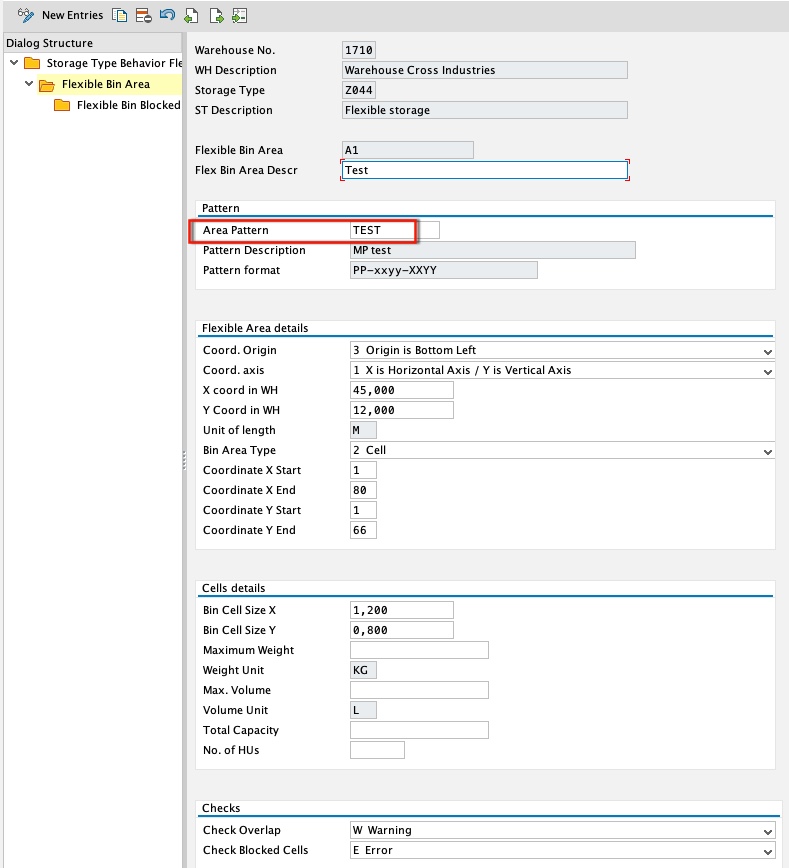