Hello, Reader. I am currently working as an ABAP developer and consultant. I’m going to share an information about U4A IDE Platform. It’s helpful for ABAP developer or user who is using SAPUI5. Before i started, It will be easy for ABAP developers to understand as who knowing basic knowledge of SAPUI5.

After reading this, you also learn about integrated solutions that are more efficient than other solutions by reducing overall development time and efficiency in maintenance personnel.

Getting explored with U4A IDE Platform

What is the U4A IDE Platform?

U4A IDE Platform is UI/UX IDE toolkit which has a function as an easy -to-develop UI5 application by ABAP developer. In addition, It’s called ‘UI5 for ABAP’, in short: ‘U4A’.

The U4A IDE Platform provides a combined development environment of SAPUI5, increasing ease of use, and ABAP Technology alone enables the implementation of from Application to Web UI.

Then, what’s difference with SAPUI5, and why should i recommend to use ‘U4A IDE Platform’ instead of SAPUI5?

There are 3 reasons why I think development using U4A IDE Platform is necessary.

And here is the solution to solve these questions at once,

FIGURE2- Development of application without interface.

FIGURE4- A reduction in educational time.

The U4A enables UI5 Layout Design, Business Logic Coding in an integrated development area (with only ABAP Technology), also the Table Wizard feature makes it easy and fast to implement complex Grid-type Application, and additional Web elements (like Image, CSS, Html, js etc.) can be easily managed as well as shared and reused.

Another feature is that simulation and debugging are possible with just one or two clicks, as shown as follow figure.

The positive impact of U4A on process.

And then, we introduce how the U4A is different from the existing UI5 implementation.

As shown in the figure above, development work could be carried out on the basis of One Application and One Developer, which could shorten the development period above all, and has the advantage of easy program management.

It is also an application developed on the basis of SAP ABAP Technology, which could reduce maintenance personnel after the project wrap up. In other words, you can expect to help reduce in TCO(Total Cost of Ownership) and to reduce ROI(Return on Investment).

(About 60% savings over typical development)

As Such, UI5 requires manpower with three areas (ABAP+EAI+WEB) Skill Set at the same time, but U4A could be solved with manpower of ABAP Skill Set. For error analysis, it is possible to solve the error through ABAP Debugging, There are no need the log processing with front and back developer to solve interface program issue.

In addition, the same source can be applied to all platforms simultaneously due to low platform dependence. Programs developed based on U4A could be installed easily in environments where U4A is installed. Therefore, the program is highly reusable.

And What would be the Product Specification that could use U4A?

Verify each specification according to the following classifications.

So far, we have briefly explored the U4A solution. As has been introduced, U4A has various advantages than existing UI5, and it is excellent in efficiency and visibility. The only integrated solution available simultaneously, including SAP ABAP Technology-based UI/UX design and ABAP coding and testing, is “U4A IDE Platform”.

Thank you for reading today’s blog!

I want to know whether we can have a trial for U4A IDE?

Thank you for your attention,

I am so sorry to say we don't have a trial program for U4A IDE.

But we're have  a website for demonstration for U4A IDE.

And you can also check here how is working for our application which developed by U4A IDE.

If you want be with U4A IDE, please check this before.

For further more information please contact me with below.

i appreciate the effort you implement and wrote this article but all the things you listed as feature is anti-pattern. I don't think it is a good idea of developing without interface or trying to control entire ui5 via backend. Not only it will limit UI5 features, it will create a crazy dependency on this product limitations, maintenance and support. It won't decrease the development time, it will increase it with all the customers requests for the application.

Just wondering if U4A can develop a page as below ? This is from my current SAPUi5 project homepage, i had to blur some private info. On the left there are application menu, in the middle announcements, calendar and charts. 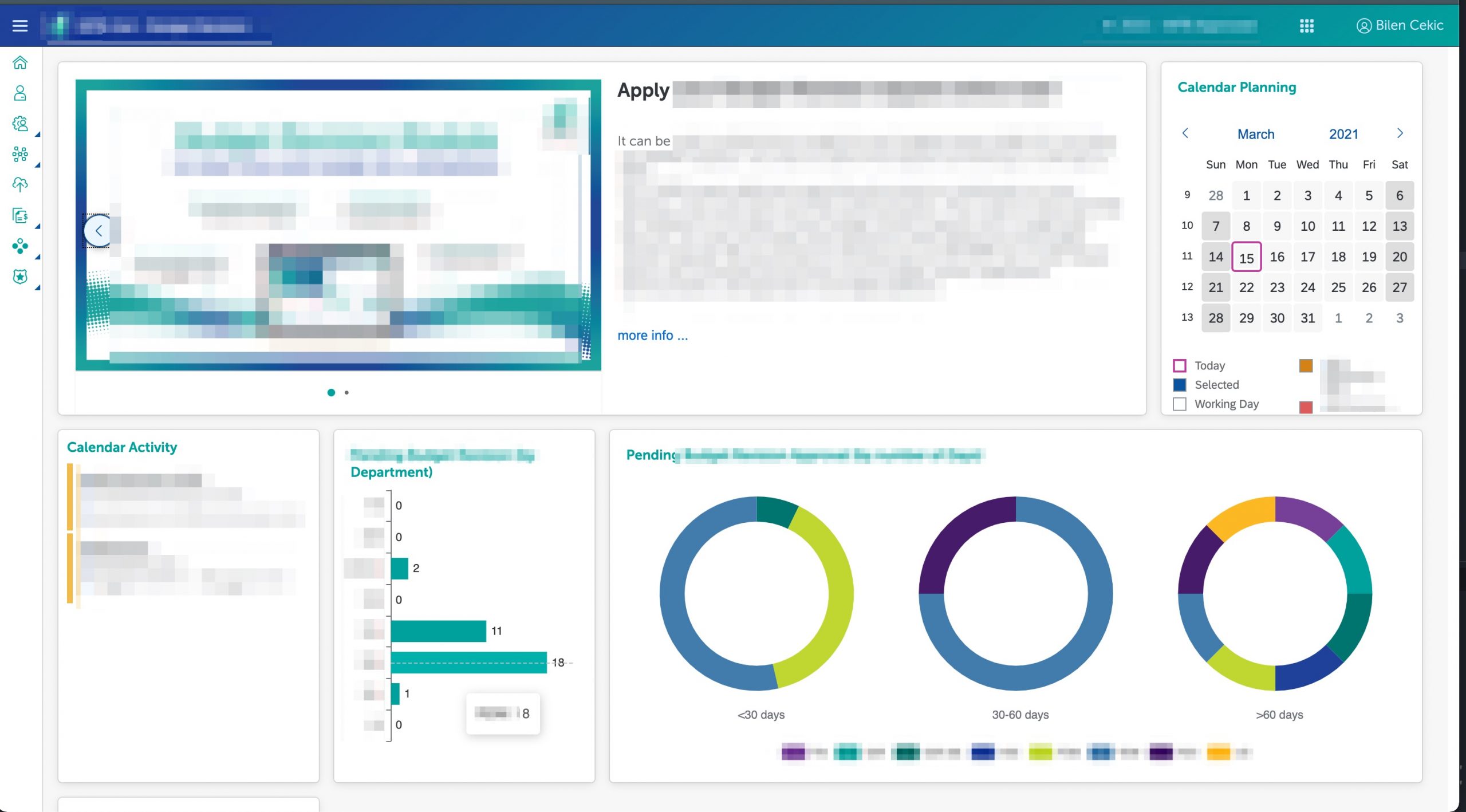 There won't be any UI5 CLI, no CI/CD pipeline, no best practice, source code control or any third party library integration, new features coming via UI5 etc. There are so many different points for a company to decide on abap add-on to invest their UI5 development on this.

At first, the solution I introduced, provide is a specialized technology that is not only implemented through the back-end you said, but also features that can be implemented using a combination of back-end and front-end. That's why it's possible not to limit UI5 functionality, but to make maintenance easy and reduce development time. I'm going to share some examples similar with you show and that the sample is implemented with U4A.

Dashboards above are dashboards that are actually used by customers, and each chart  receives a value in real time and display it. If you want to see more samples created by U4A IDE platform, please visit here.

Please refer to the attached link which has Demonstration in U4A 's workbench develop process for your understanding.

For your reference, U4A provides variable methods for ABAP developers that, interface functions between legacy systems data and SAP data and control of device(Mobile, PLC, etc.).

For further more information please contact me with below.