SAP Data Warehouse Cloud provides modelling capabilities for hierarchies, for consumption in SAP Analytics Cloud. However, at time of writing, the hierarchy functionality in SAP Data Warehouse Cloud does not match the richness of hierarchies in typical SAP source systems such as SAP S/4HANA or SAP ECC. There’s no features yet like hierarchy versions, node validity intervals, orphan node handling, text language support or allowing different data types as leaf nodes. You might be looking for a way to still use those source hierarchies, and the good news is: it’s possible!

In this blog post I’ll explain how you can transform a typical S/4HANA parent-child hierarchy to fit the current SAP Data Warehouse Cloud capabilities. As an example, a GL Account Hierarchy is used, which is sourced from SAP S/4 HANA Cloud Essentials. In below figure you can see the end result in SAP Analytics Cloud. 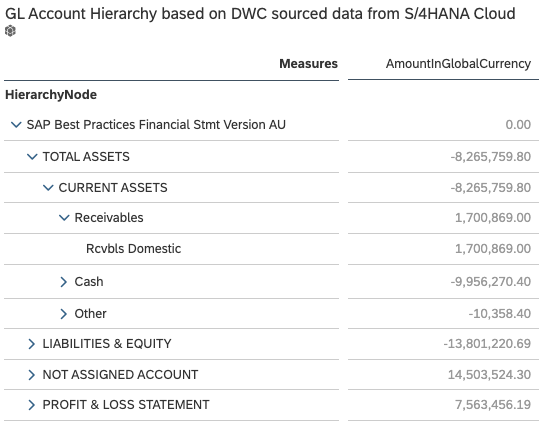 A connection to the source system is made using the Cloud Data Integration (CDI) connection type. Four CDS Views are used, of which one covers the GlAccount line items for the transaction data to be able to display some sample data, and the other three are input for the hierarchy model, namely the parent-child hierarchy itself, hierarchy texts to derive the functional node names, and the GL Account texts to derive the functional GL Account names. Below a list of the definition of these CDS Views. 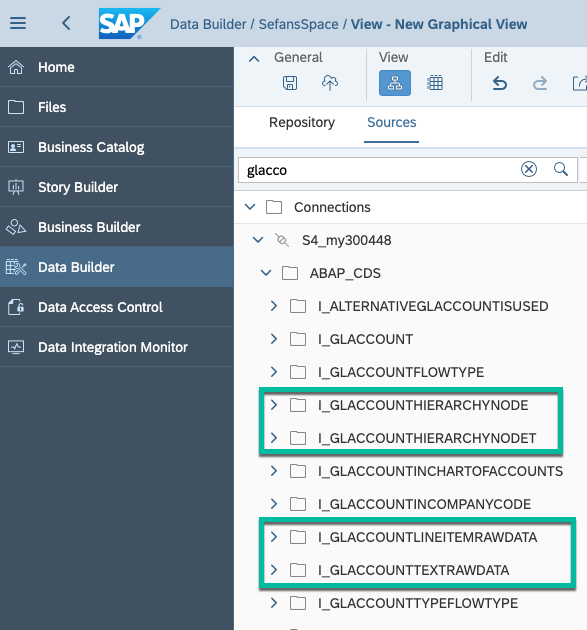 Importing the CDS Views is skipped in this blog post as importing is simple and straightforward.

As the hierarchy model will contain quite a bit of join logic, and the transaction data volume is rather large, first the data is persisted in SAP Data Warehouse Cloud. As we don’t need all the line items, they are filtered on one specific company code, as you can see in the SQL view below. After deployment, the view is persisted, as you can see on the right side of the below figure, under the “Persistency” header.

This SQL view is later used for the main Analytical Dataset upon which the SAP Analytics Cloud Story is based. By the way, if you’re wondering about the naming convention: the prefix “tc08_” stands for the 8th test case that’s built in this space, so it’s just for my own organisation and not needed to adhere to. You can also see that the source table here has a different name than the CDS View that is used, and that’s just because I gave it that name when importing the CDS View. 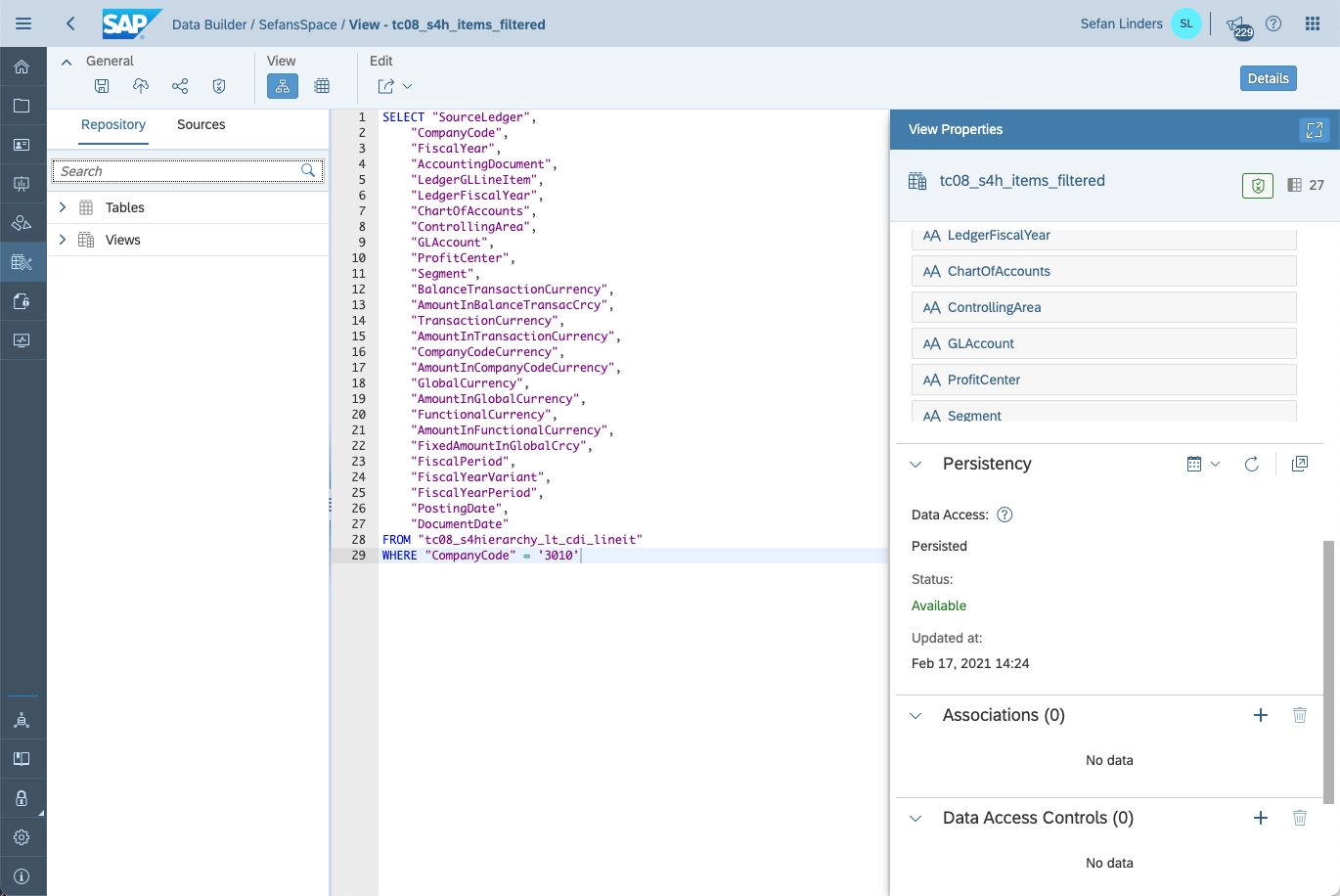 In SAP Data Warehouse Cloud, you can model your views with a graphical editor or with a SQL editor. I’ve chosen SQL for the hierarchy dimension, as I found it easier to trial and error with (it took a while before the hierarchy worked…) and it also shows you in one go all the applied logic. See below a screenshot of how this looks like in SAP Data Warehouse Cloud, and below that a copy of the code. Scroll past the code to see an explanation on the logic. Please note that you have to choose “Dimension” as your “Semantic Usage”, otherwise the hierarchy semantics can’t be set. In below screenshot this selection wasn’t made yet and was still set to “Relational Dataset”. 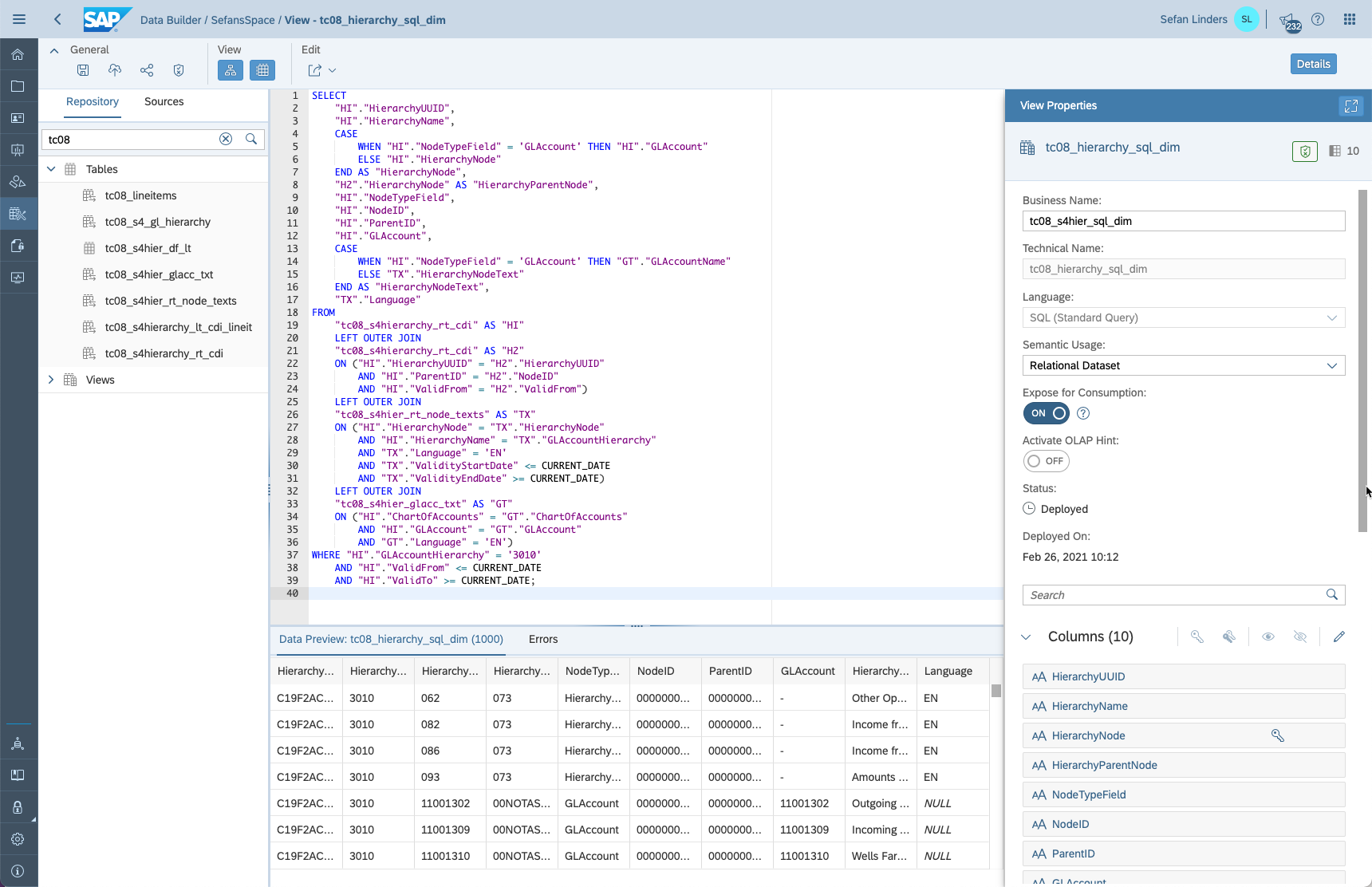 Several hierarchy features are not supported at time of writing, and that’s basically what the above code is getting you around. In the code, we fit the source hierarchy to SAP Data Warehouse Cloud, by choosing one hierarchy version, removing hierarchy and text time validity, by setting a fixed language, and by “merging” hierarchy nodes and GL Accounts into a single key field.

What is happening in the SQL? Let’s work top down through the code.

When the code is done, it’s a simple matter of applying the semantics. First the parent column and child column is selected from the hierarchy menu. 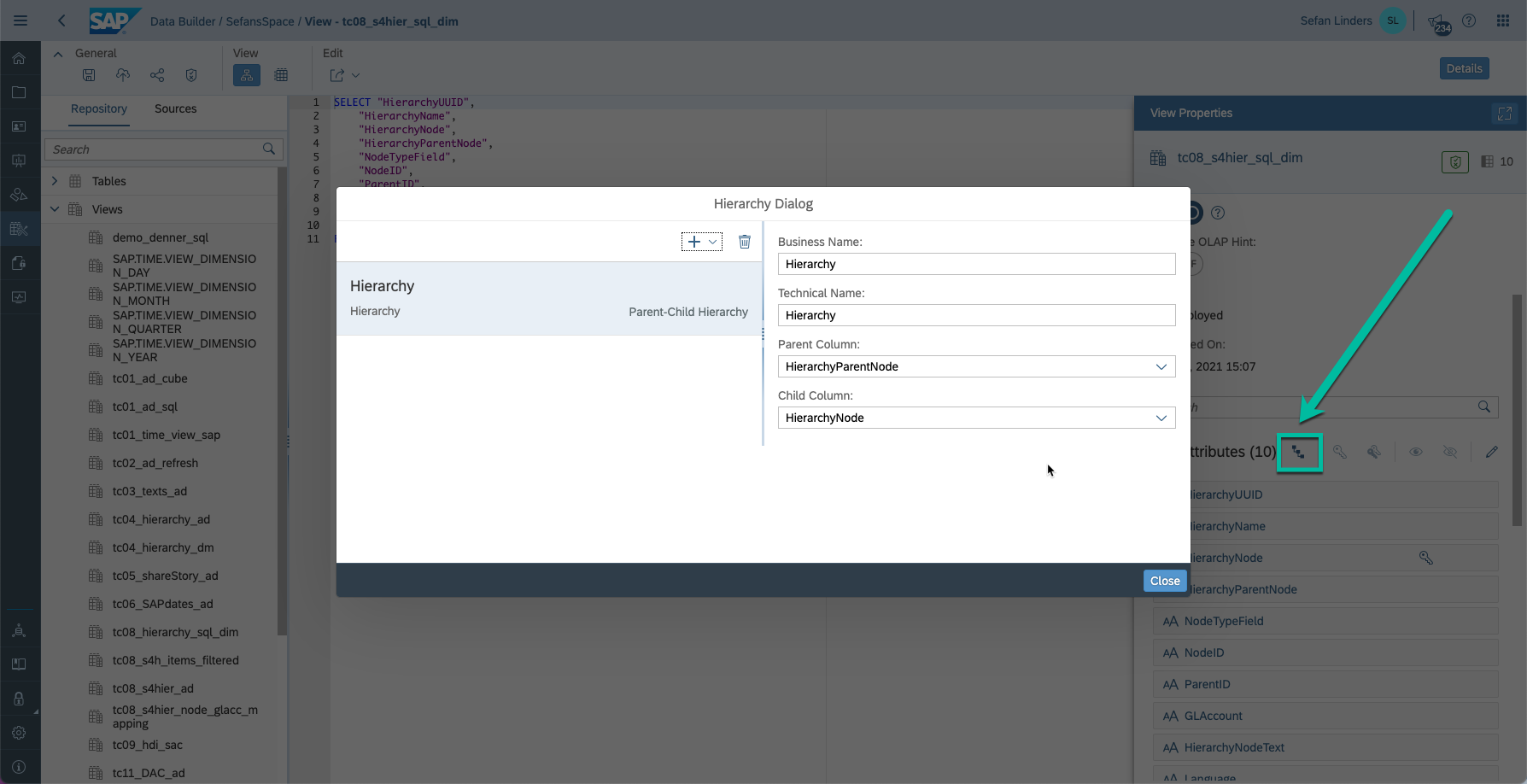 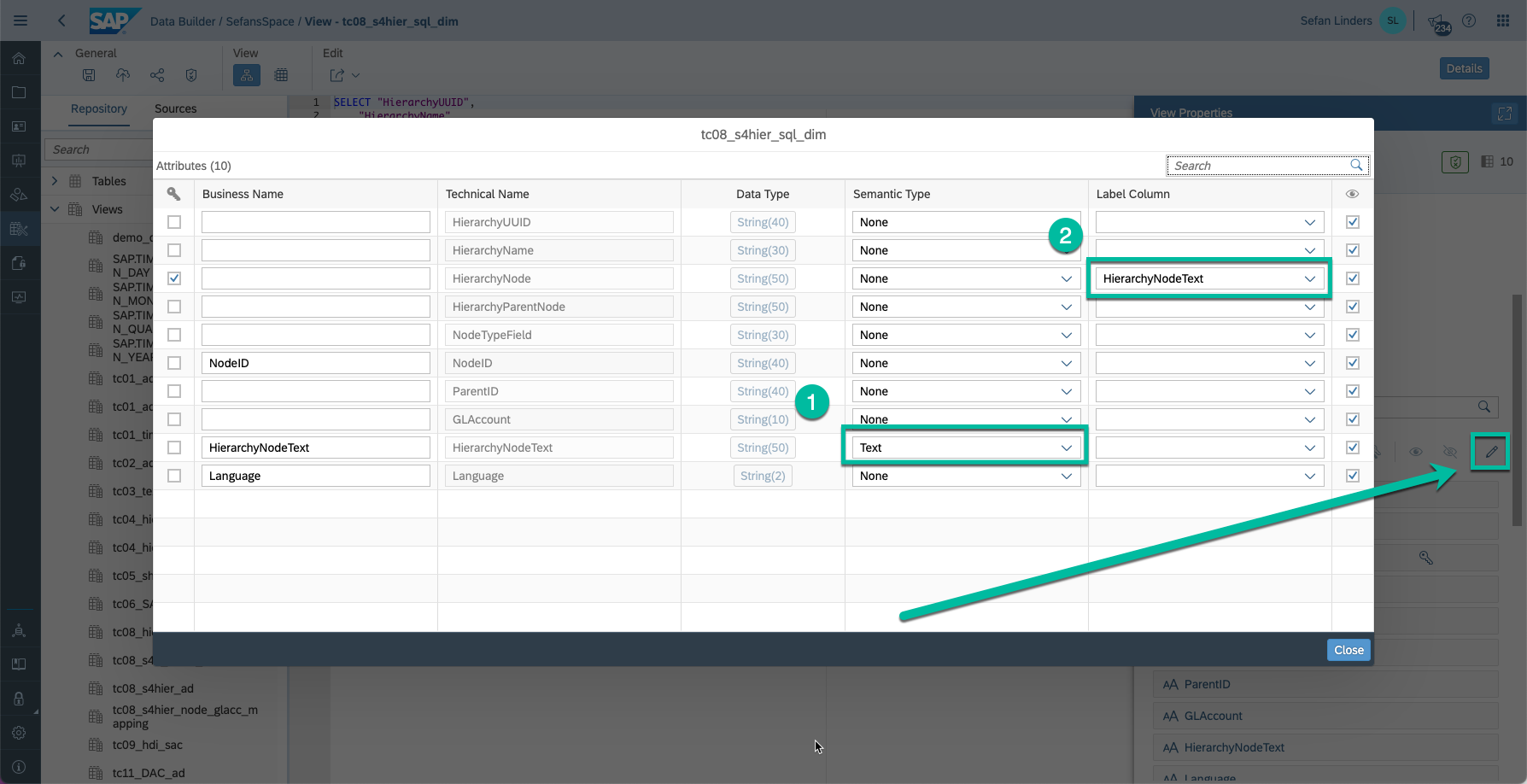 As a last step, in the view settings, only the HierarchyNode is defined as key. You can have only one field for the key definition of an hierarchy. 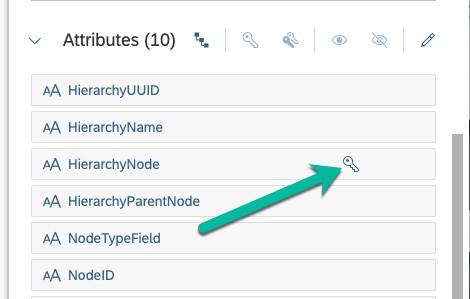 Figure 7: HierarchyNode as the only key 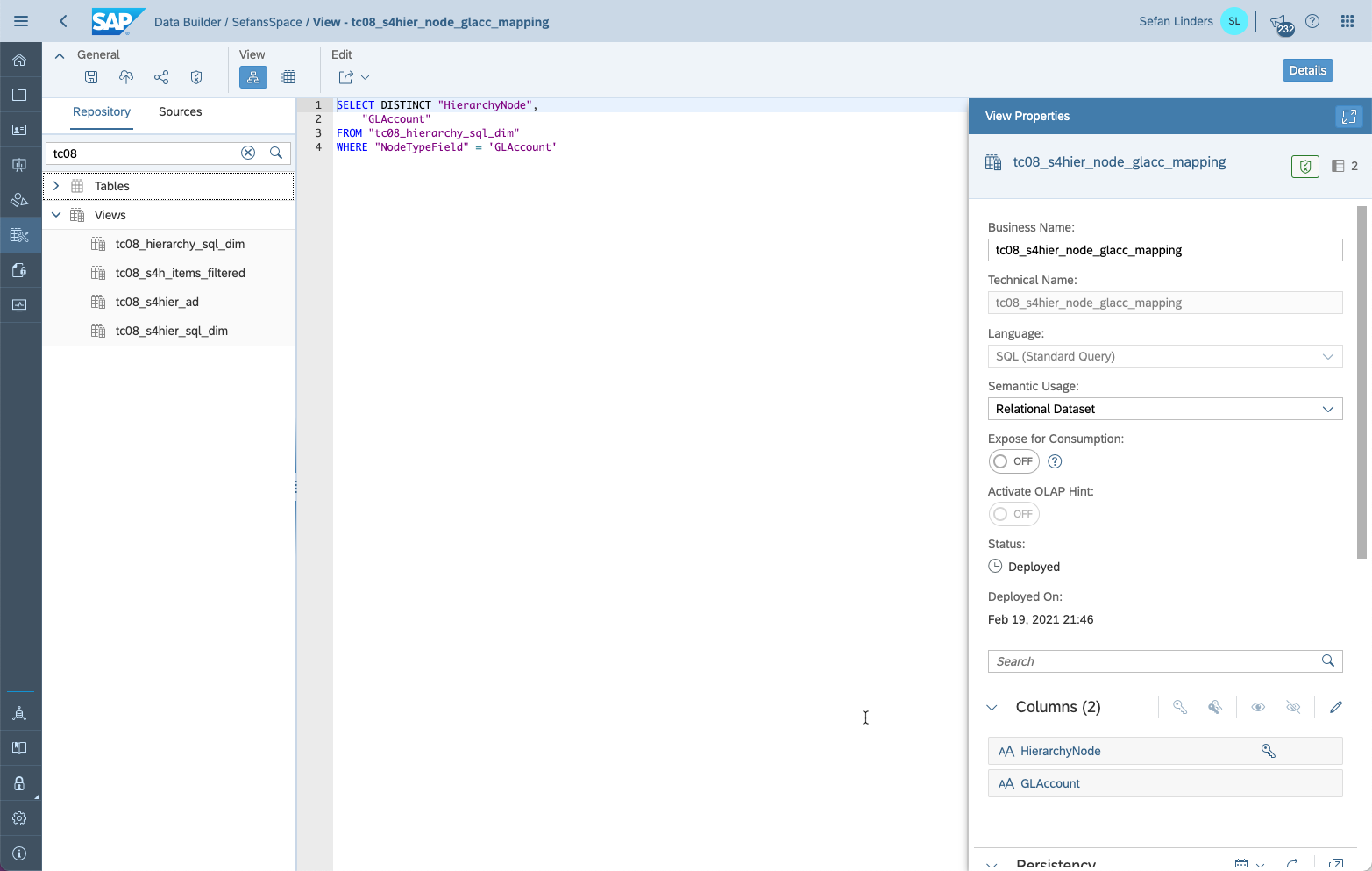 The Analytical Dataset and orphan nodes

The Analytical Dataset is the view consumed by SAP Analytics Cloud, and here we associate the transaction data with the hierarchy. For a change, I have used a graphical view. First, the filtered line item view is inserted, after which the data is enriched with the HierarchyNode field by joining with the view that contains the GL Account to HierarchyNode mapping. 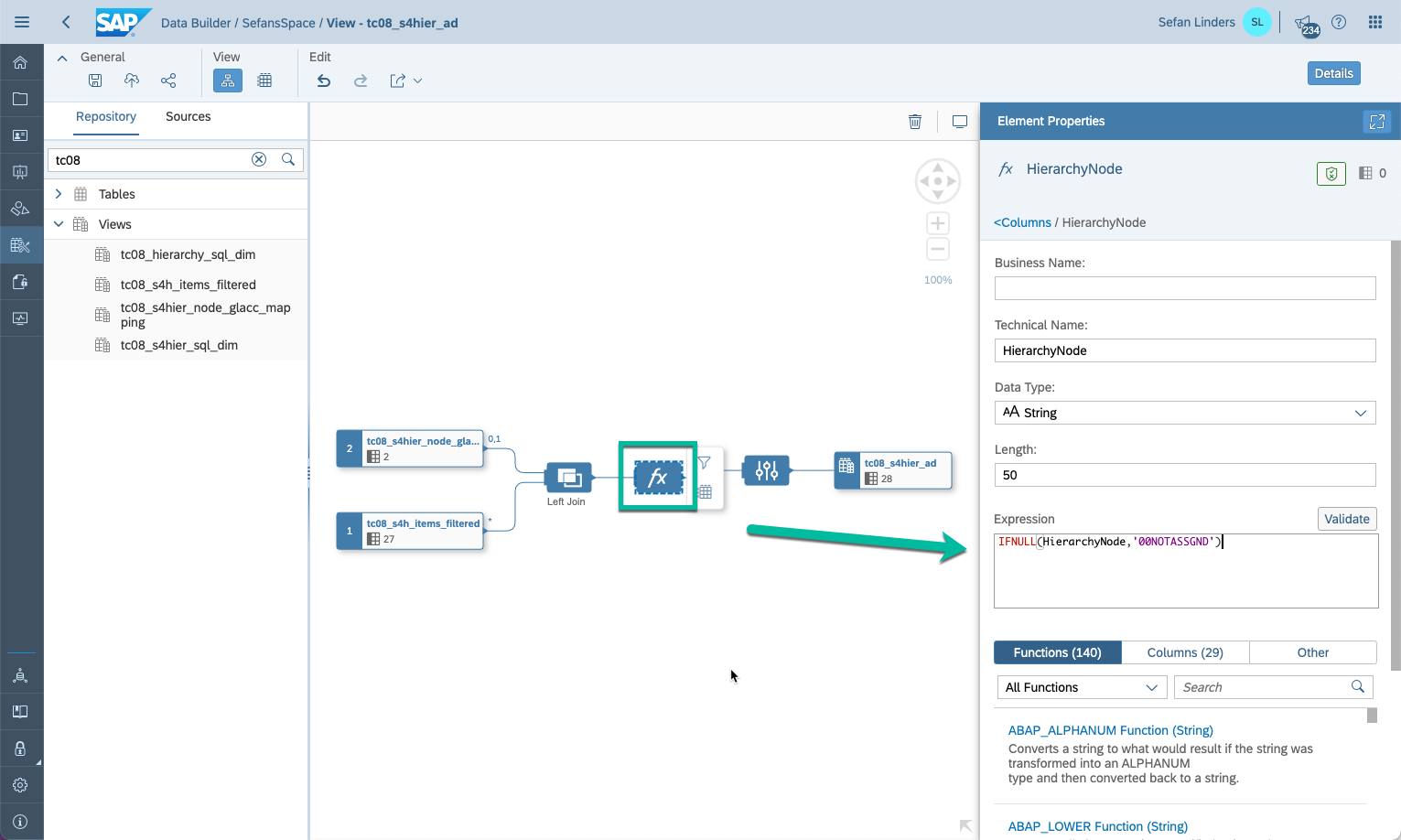 In the view properties, an association is defined to the hierarchy dimension, based on the HierarchyNode field. 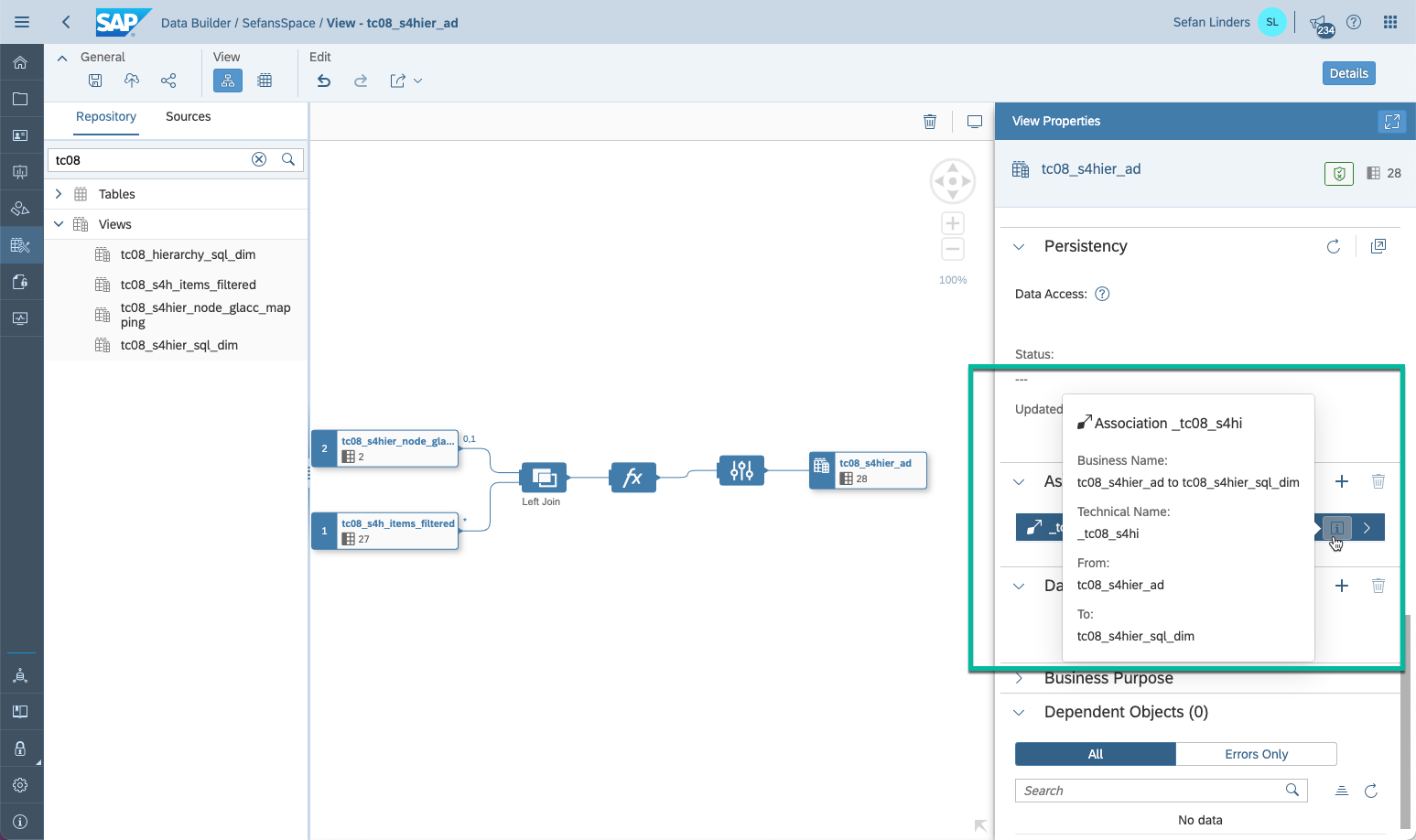 Yes, a graphical view was used, but if you’re interested to see the code, from a graphical view you can simply choose “Preview SQL” to see the SQL representation of what was modeled. The below figure shows this feature, and the code is pasted below that. 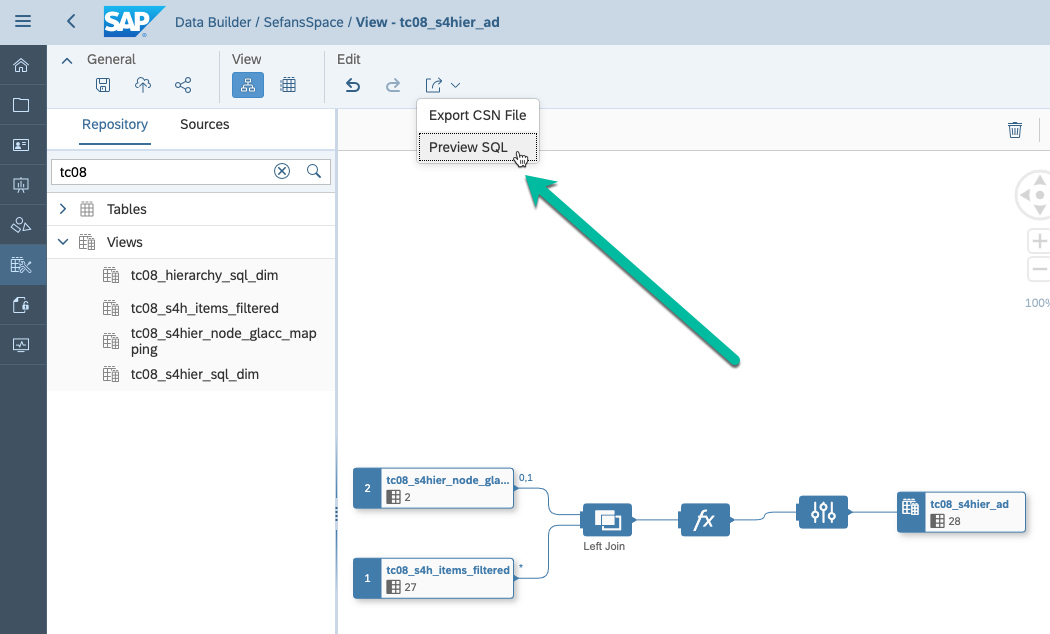 Now it’s simply a matter of using the Analytic Dataset in an SAP Analytics Cloud Story. When you choose HierarchyNode in the Rows section, the hierarchy already shows up, by default with the functional name (Description). This is how the data was visualised in the first figure of this blog post. As you can see in the below figure, also the ID can be displayed instead. 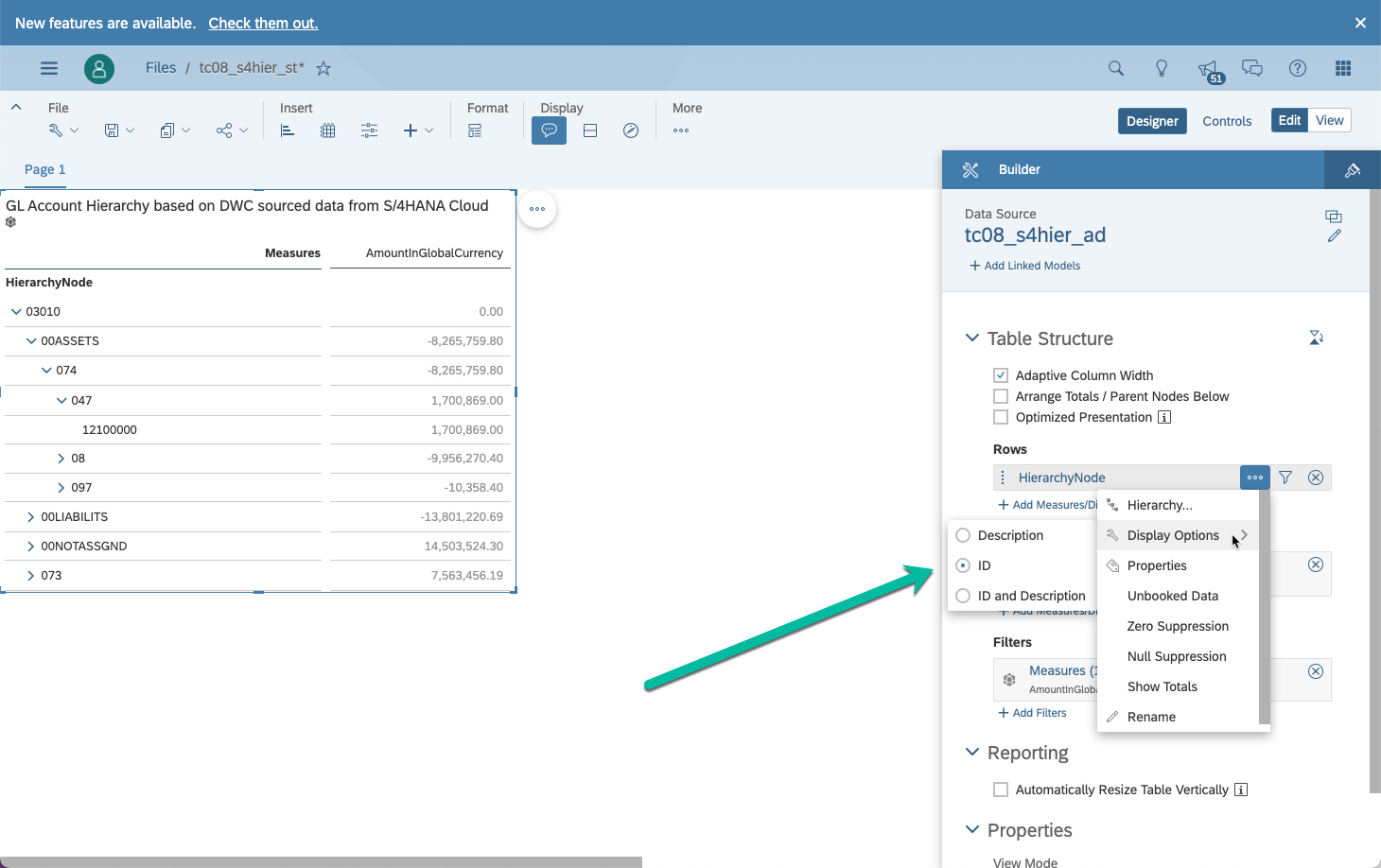 This blog post showed how you can use a typical SAP source system hierarchy in SAP Data Warehouse Cloud, and displaying it in SAP Analytics Cloud, by transforming the data to the supported hierarchy features at time of writing. This is just one way of getting it done, so feel free to take a different approach, and feel free to share your approach in the comments.

thanks for your blog!

We have worked on the same topic with our customer and had a quite similar solution - maybe you already have some input on our open questions: 🙂

As far as I can see you have now a dedicated "dimension" available in SAC containing just the G/L Account Hierarchy, correct? Or did you also consider to have just one "dimension" called G/L Account which also contains attributes like if it is an balance sheet account or not?

Do you have any good idea how to eliminate leading zeros without disturbing the sorting behaviour (more related to the cost center hierarchy)?

Thanks in advance and best regards

Thanks for the detailed blog, I tried the graphical way by importing the standard G/L Account & Hierarchy related CDS Views from my S/4HANA 2020 OP system. Unfortunately the data type for Parent, Child fields is automatically being assigned to Binary and cannot be overwritten from the configuration(probably will try import/export), This is causing issue in join.  Is it the reason why you have gone for scripting instead of graphical view creation?

I went partially for SQL as it was easier to trial and error. I did not run into a datatype cast issue. Sounds like that needs a ticket to be logged. As a workaround, you could also try a cast operation (TO_NVARCHAR) in a graphical view formula node.

Thanks Sefan for checking and providing feedback.

"tc08_s4hierarchy_rt_cdi" is the local name you used for CDS view I_GLAccountHierarchyNode?

I do not see any field as NodeTypeField having value as 'GL Account'. Is it a custom field created?

Hi Adlin,
Answering for Sefan since I happen to see this question...
No, "tc08_s4hierarchy_rt_cdi" is the technical name (chosen on import) of the lineitems view https://api.sap.com/cdsviews/I_GLACCOUNTLINEITEMRAWDATA