If you followed the evolution of the Git-enabled CTS, you might remember that there are several use cases that gCTS would like to help with. For two of them (distributed development and feature-development and maintenance in one system), it was said that some functionality is still missing. So gCTS is not able to completely support them. With SAP S/4HANA 2020, gCTS has climbed up the lather a bit. It now offers a conflict resolution editor. Conflicts might occur if you decide to reduce your system landscape in the case of feature development and maintenance in one system.

Imagine the following: you touched one object for improvements to add new functionality and then a bug is discovered. This means that you have to switch to the maintenance mode – so in this reduced system landscape, this means you would switch to a maintenance branch. In there you fix the issue and deploy it to production. Fine so far. But now, you would like to continue with your new features. This would again mean a branch switch. But you would not like to switch back to the bug that you just fixed. So you would need to merge the fix into your feature branch. But as you touched the same object before to add new functionality, this will now result in conflicts. So first thing that you have t do before you can continue developing new things is solve the conflict

The use case distributed development is different but might have the same demand for solving conflicts from time to time: For ABAP, there is normally no development environment available, that is used by one single developer. Teams share one ABAP runtime and develop in there. Nevertheless, if there are many developers, it might make sense to have several development systems to reduce dependencies and interferences between teams. A distributed development scenario is the consequence. But on the other hand, production systems are not distributed. Functionality developed by different teams has to be integrated at some point to make it available to business users on the production environment. It can easily happen that the same objects were touched by different teams. When integrating, these objects will come up as conflicts. Conflicts need to be solved.

Starting with SAP S/4HANA 2020, you can make use of the conflict resolution editor to solve conflicts.
But before you can start doing so, you have to set two parameters for your repository: VCS_AUTOMATIC_PULL and VCS_AUTOMATIC_PUSH. Both need to be set to ‘false’. This is to stop the default automatic pull and push behavior of gCTS when a new transport request is released: Pull the current commit from the remote repository, overwrite what was pulled with the changes that are part of the released transport request, and push the changed files (objects) to the remote repository. 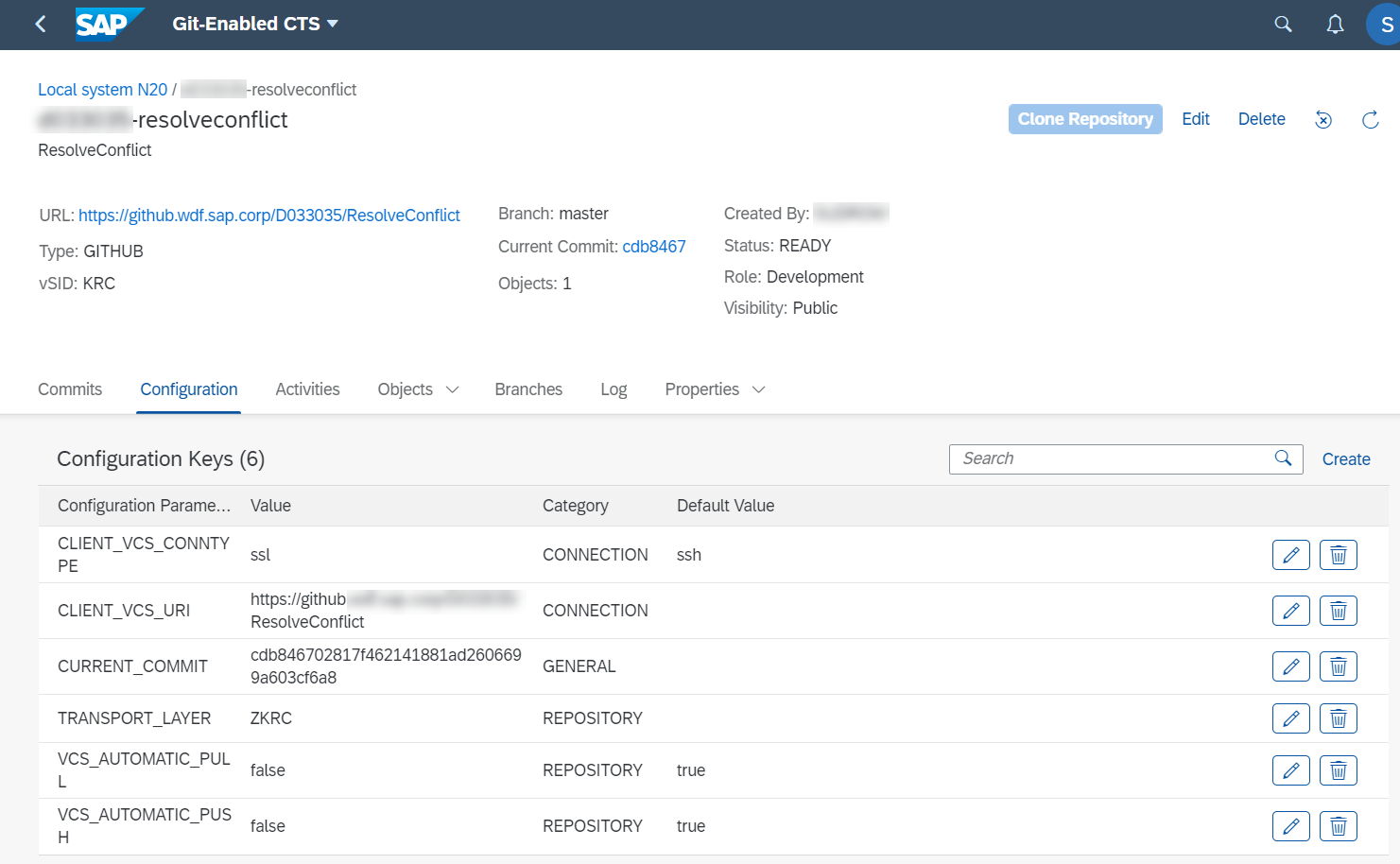 Configuration parameters of my repository

More details on how to work with these parameters are available on the SAP Help Portal at Disable Automatic Pull and Push.
After you have set these parameters for your repository, you might want to know how this works. So, I will provoke a simple conflict situation, and use this example to show you how conflicts can be resolved.
For this example, I use just one development system and simulate the conflict by manually editing a file directly in the remote repository. For sure, this is not how conflicts arise in the daily life of developers, but this is in my eyes a sufficient and simple example to show how conflicts can be handled in gCTS.
I have already created a package in ABAP that uses a transport layer which is configured to push objects to Git whenever a transport request is released. For more information, see Define ABAP Packages as Managed by Git-Enabled Change and Transport System.
The commit from the transport request that I used when I created the package is displayed on the Commits tab.

The expectation is now that a conflict comes up as someone changed the class to ‘Hello someone’. This is the version of the coding on GitHub in the remote repository. I changed the class to ‘Hello there’ – but the version that I started from when doing this change was ‘Hello SAP’. So, I did not take that latest state of ‘Hello someone’ into consideration when changing the class. This is why a conflict is now to be solved. Should it be ‘Hello someone’? Should it be ‘Hello there’ or some merge between the two? This is what we now have to resolve. And we are going to use the mechanisms that gCTS offers in SAP S/4HANA 2020 SP1 to do so.

I hope that this simple example showed the idea of how conflict resolution can be done when gCTS is in use. Try it out for yourself and let me know if you have questions
You can find more details on the SAP Help Portal at Use the Objects Tab of a Repository. and Resolve Conflicts.
The complete documentation for Git-enabled CTS is available on the SAP Help Portal at Using Git-Enabled Change and Transport System. 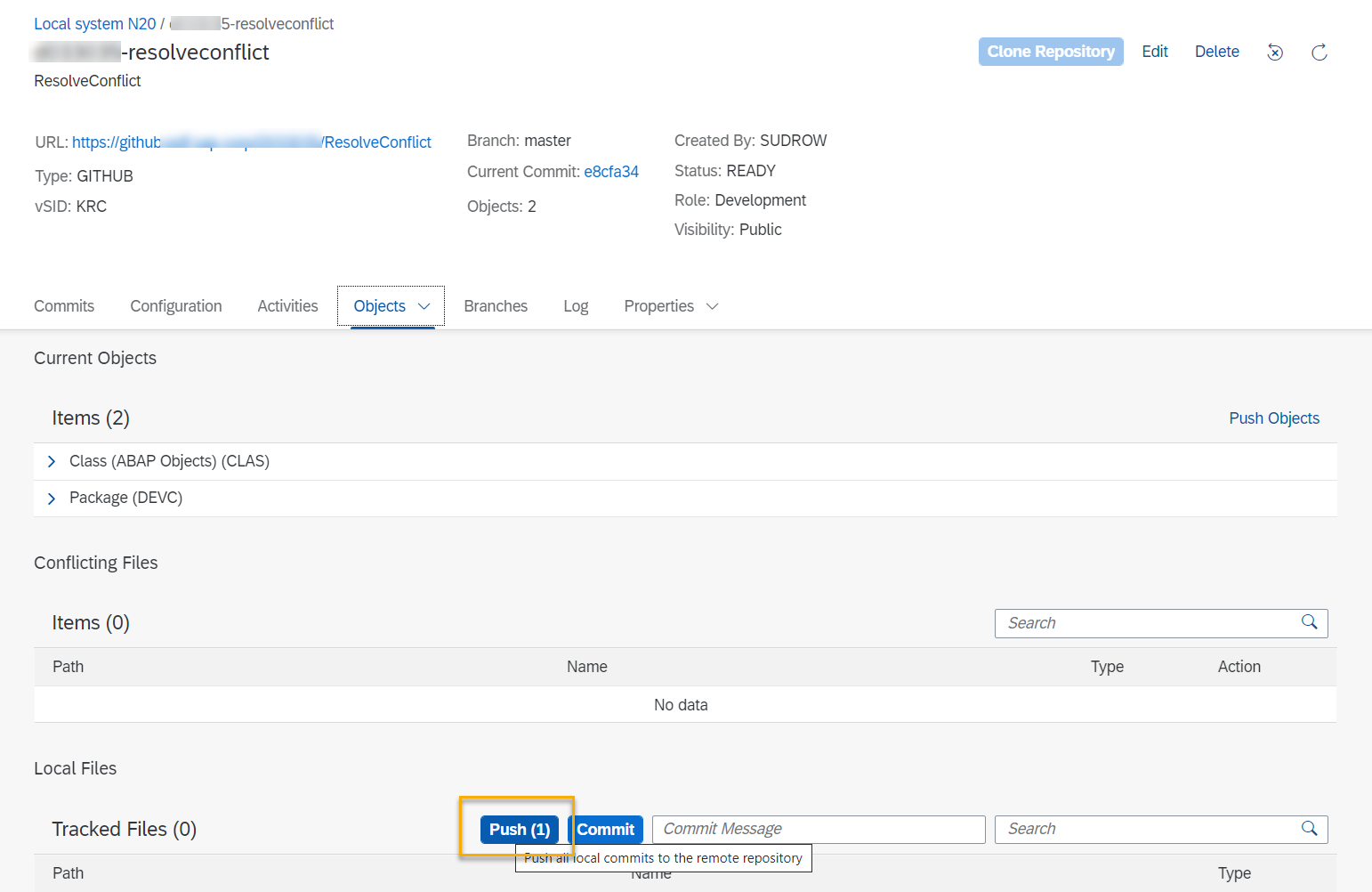 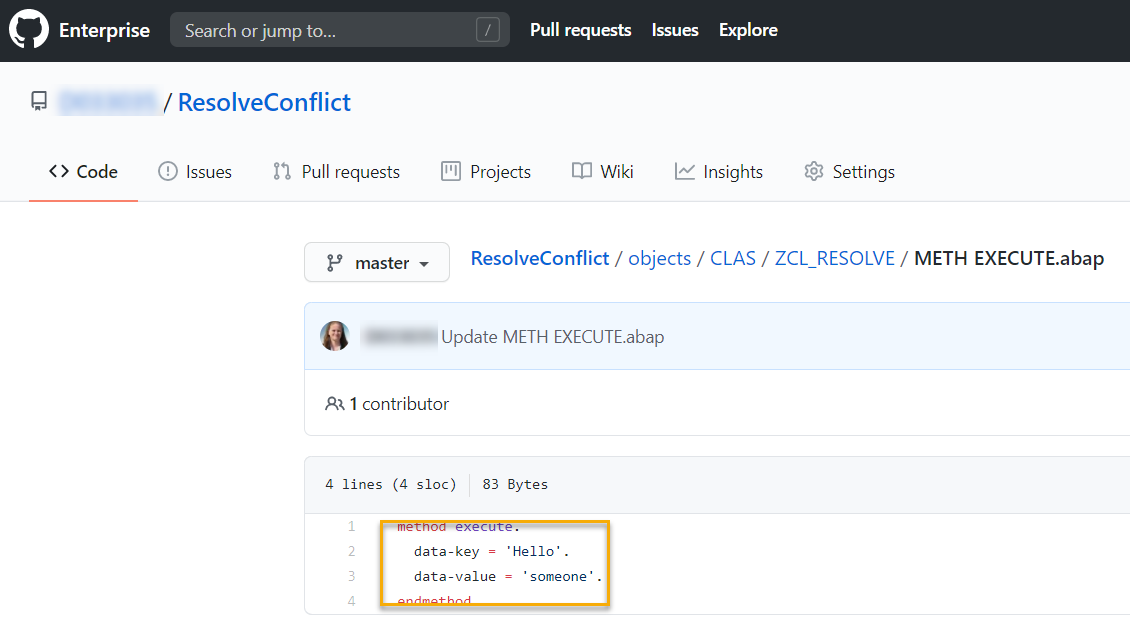 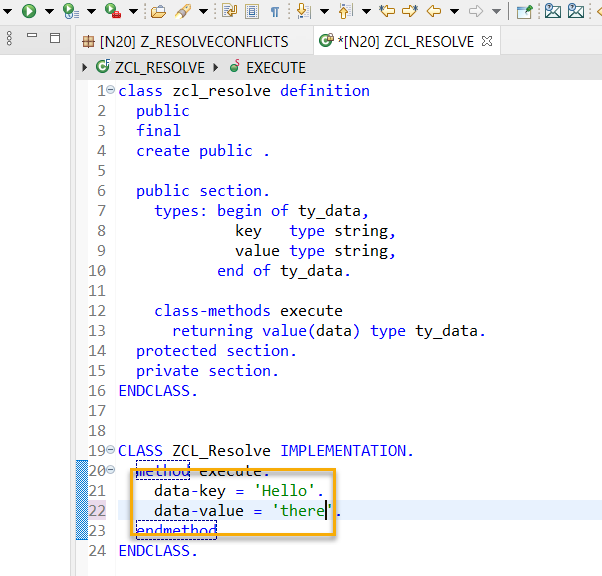 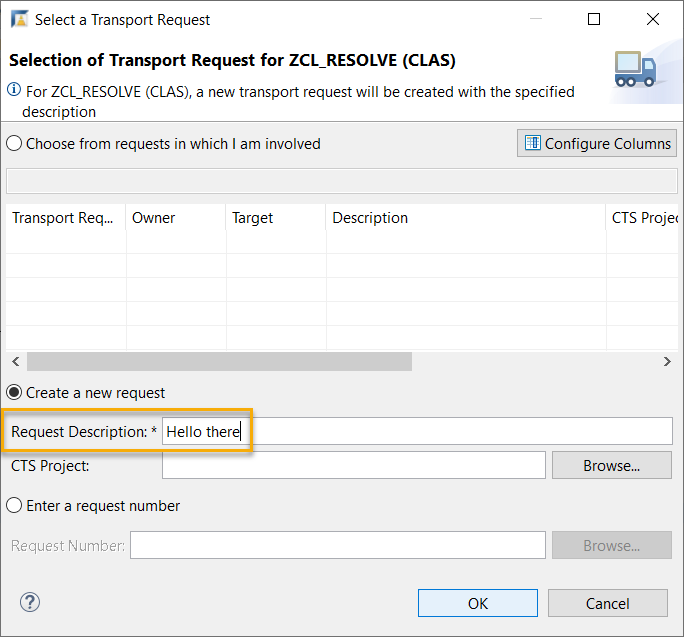 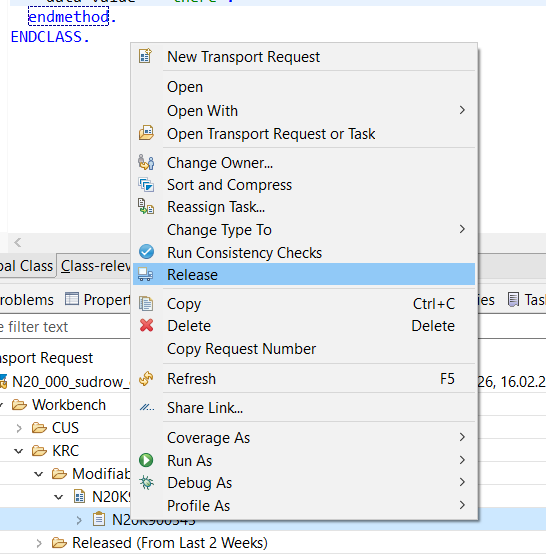 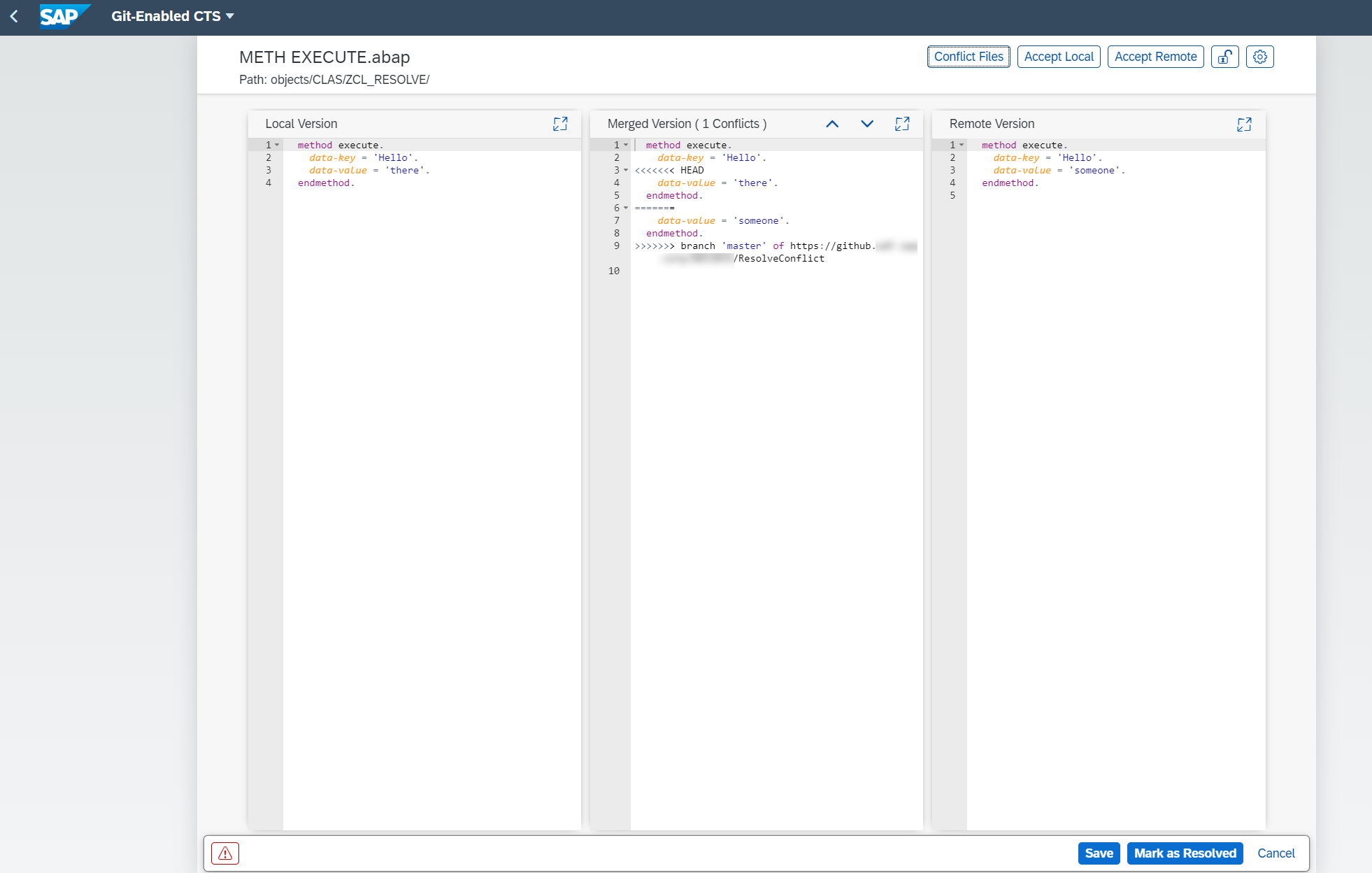 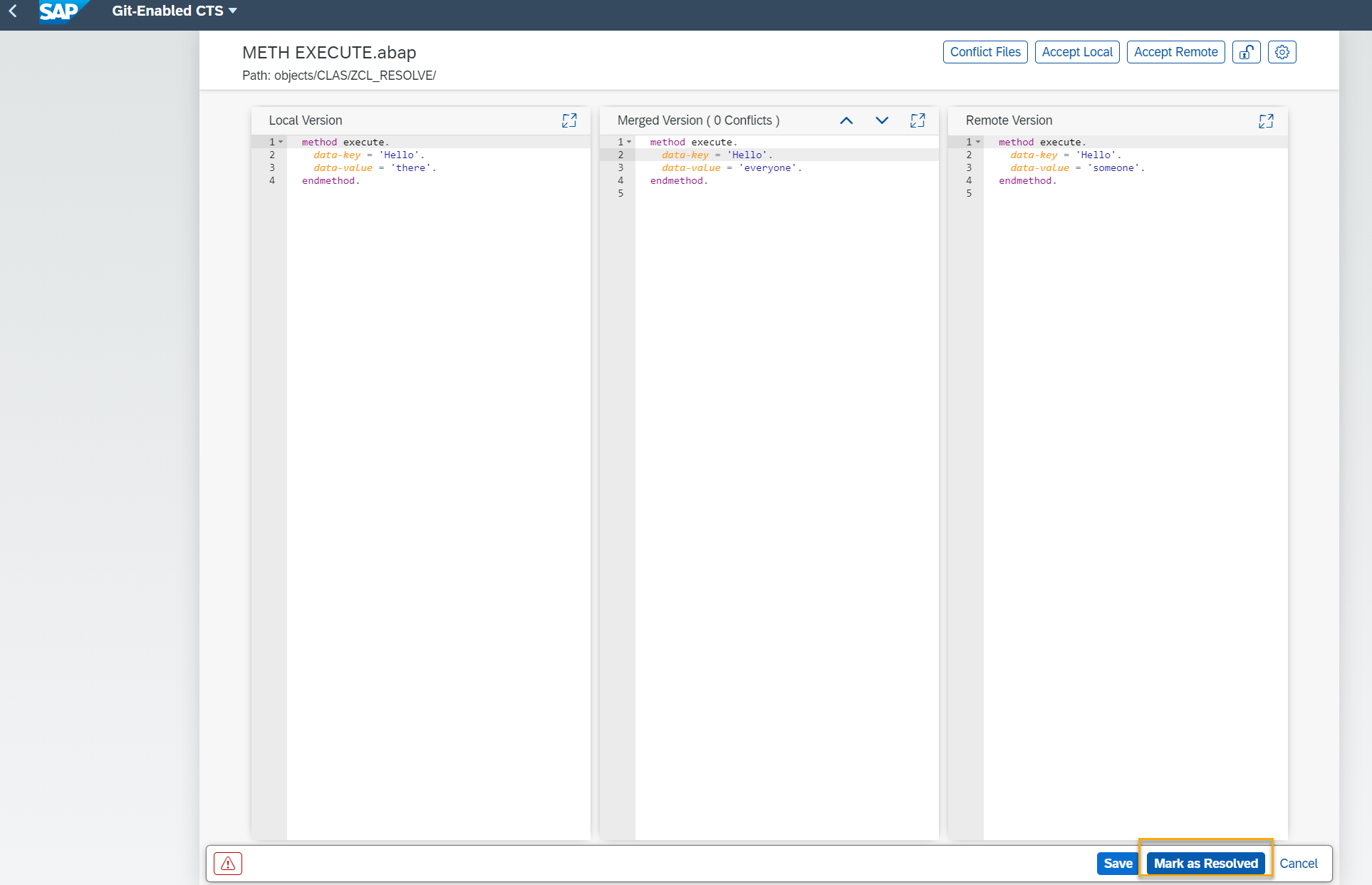 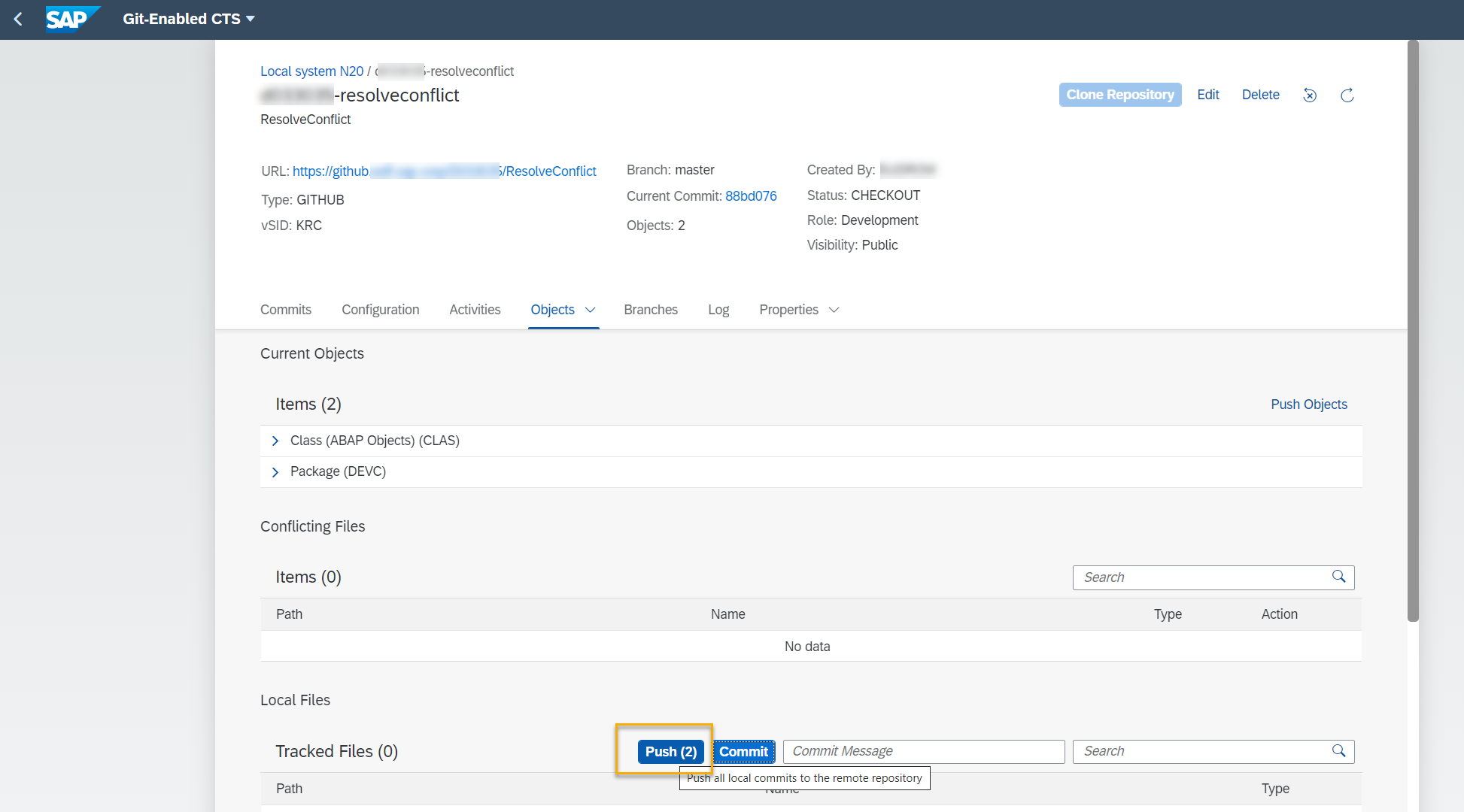 If conflicts occur during development it is, in my opinion due to bad architecture or planning and split of change requests, if changes are needed it a central place it seems like a https://en.wikipedia.org/wiki/God_object.

With ~4500 commits in abapGit over the last 6 years, we rarely see conflicts, conflict resolution is a rarely used functionality, typically not used in the daily work. Conflicts is a natural result of bad architectures, and cannot be solved by any versioning mechanism, but instead must be solved via architecture and planning change requests.

In the case that a conflict occur, what is the background for adding custom functionality for conflict resolution? This is already built into GitHub, GitLab, and probably more.

I adapted the introduction to explain why and in which use cases gCTS would need support for conflict resolution.

So we have similar landscape, where multiple systems are now consolidated into 1 single landscape and chances of multiple developers requiring to work on same object increases. Does GitCTS help to address this issue ?

gCTS does not change the locking mechanisms that the workbench provides. An object is still added to a task and locked for editing by others until the task is released.