More and more customers who had adopted SAP S/4HANA during its early releases are now performing upgrades to our latest SAP S/4HANA release.

The reasons for performing upgrades are typically to:

In my role as technology architect in our SAP S/4HANA Regional Implementation Group I have had the privilege to support several customers during their upgrades during the last couple of months.

One recurring issue I have seen at several customers was around missing equivalent Support Packages, which I would like to make you aware of to avoid running into a similar situation and to explain how to handle it.

It is important to understand this topic even before planning for an upgrade since it also should be considered when applying a Support Package for a specific component in order to avoid unnecessary issues during an upgrade later on.

In order to upgrade to our latest SAP S/4HANA major release or Feature Package Stack (FPS), our SAP Maintenance Planner will analyze the currently deployed software components and check if equivalent software packages have been released for your planned target release.

Let’s suppose you are still on SAP S/4HANA 1511 and have recently upgraded some specific software components related to an industry solution or an add-on. An example could be that you might have upgraded your SAP Revenue Accounting and Reporting Add-on 1.3 (REVREC 1.3) to SPS 13. When you subsequently try to upgrade to SAP S/4HANA 2020 FPS00 (major release), the SAP Maintenance Planner will provide the following warning: 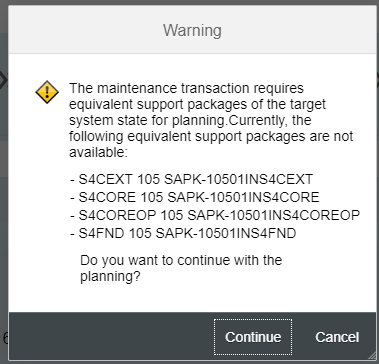 Subsequently you will not be able to continue the upgrade as your SAP REVREC 1.3 SPS level does not have matching equivalent software packages available for SAP S/4HANA 2020 FPS00, but they are only released as part of FPS01. SAP REVREC 1.3 can thus not be higher than on SPS 12 to be able to upgrade to SAP S/4HANA FPS00.

How can you find out that you might have a component deployed on a Support Package level too high to be able to perform your upgrade?

Follow the instructions in https://launchpad.support.sap.com/#/notes/832594, which explains that you would have to check the software package info in our SAP Support Portal and see its expanded attributes, which provides clarity about equivalent Support Package levels in the target release.

To get further clarification, you can always get more information and confirmation by opening an SAP incident on component XX-INT-PPMS-CONT.

What are your subsequent options for the upgrade?

Alternatively, it might be possible for you to revert to an SAP S/4HANA source release status before you had upgraded the affected components to the SPS level, which turned out to be too high.

Please note that it is typically not possible to undeploy a specific SPS for an affected software component to get to the previous SPS level.

If you have run across a similar situation during your SAP S/4HANA upgrade, it would be great if you are willing to share the affected software component as a comment to this blog.

One final additional remark – SAP NetWeaver 7.40 and 7.31 have gone out of mainstream maintenance at the end of 2020. Make sure that in case of interoperability and integration from SAP S/4HANA with SAP NetWeaver-based products that they would be on SAP NetWeaver version 7.50 or higher.

All the best for your upgrade!

Brought to you by the SAP S/4HANA Regional Implementation Group