Developing for Analytics with the SAP BTP ABAP Environment

With the 2102 release, the SAP BTP ABAP Environment opened up the door for analytics developments. The programming model follows the same “RAP” paradigm as in the transactional world: The entity model is implemented with CDS views that make use of additional analytical annotations that were now also released for the usage in the BTP ABAP Environment (“Steampunk”).

Another novelty is the introduction of an analytical service exposure. For an analytical service to be used as real time connection with a supported client (like e.g., SAP Analytics Cloud), the SAP Information Access protocol (InA) is required whereas transactional services rely on the OData protocol. With 2102, InA was enabled for Steampunk by adding a new service binding type as well as by including the respective communication scenario SAP_COM_0065.

With these changes, a developer can now for the first time build an end to end scenario from an analytical model in the ABAP environment up to a consumption in an SAP Analytics Cloud story! There is already a step-by-step tutorial out there, that guides you through all development steps that are needed to do so.

This blog post starts a small series, where we want to give more background and explain the concepts that are applied when developing for analytics:

[Update October 2021] What we planned to cover as blog series, is now part of the official SAP BTP documentation! Go to “Development” -> “Development in the ABAP Environment” -> “Analytics”.

Today, we will start with the comparison to transactional RAP.

According to the documentation, the Restful ABAP programming model “is based on technologies and frameworks such as Core Data Services (CDS) for defining semantically rich data models and a service model infrastructure for creating […] services with bindings to an […] protocol […]”. Let’s see if this holds true for analytics as well.

In the following graphic, I took the RAP based model (on the left side), tweaked it a bit, and then added the corresponding analytical development artefacts (on the right side) to compare the development flow: 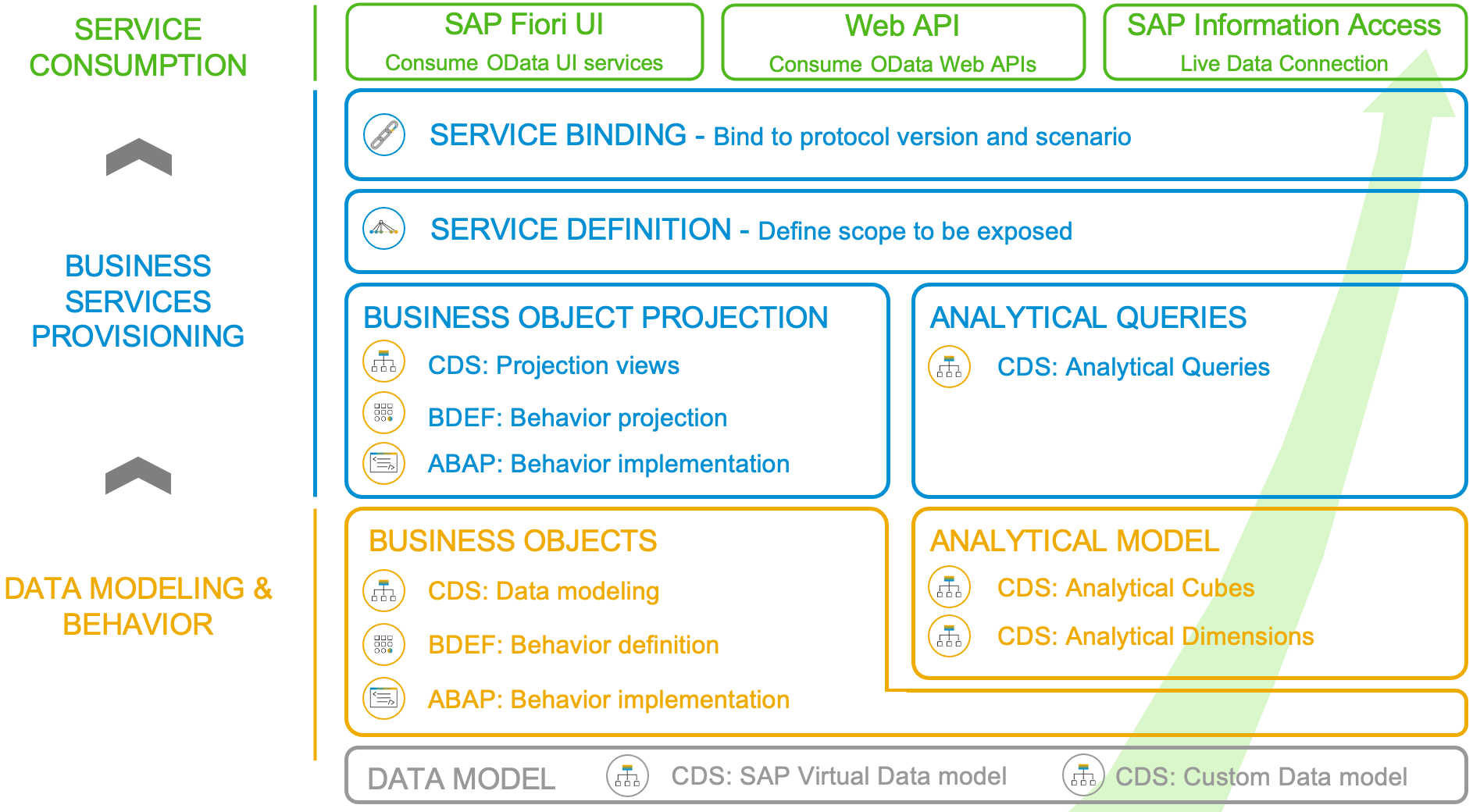 So the analytics developments are really following the same paradigm with CDS views, service definition and binding and use the same data models as a basis – just as you are used to from the RAP style transactional world.

The differences (at least from the programming model perspective) are just small additions to adapt to the special needs for analytics:

By the way, if you are not familiar yet with the ABAP Restful Programming Model, there is a great getting started blog post available.

In the next blog posts in this series, we will give an introduction to analytical modelling in general as well as how this is done using ABAP CDS entities. I will link the next posts here as soon as they become available.

[Update October 2021] What we planned to cover as blog series, is now part of the official SAP BTP documentation! Go to “Development” -> “Development in the ABAP Environment” -> “Analytics”.

Until then, stay tuned and healthy. Thanks for reading!

thank you for the blog! I have a question regarding the following quote:

"With these changes, a developer can now for the first time build an end to end scenario from an analytical model in the ABAP environment up to a consumption in an SAP Analytics Cloud story!"

What exactly is new about in detail? Sorry, that I am asking so clumsy, but I was already able to create a CDS View and consume it via live connection in SAC. So, what is new about in 2102 release?

The main new thing is that this is now possible using the InA protocol (InA type service binding) and therefore via the analytical engine (leveraging the multi dimensional analytical model with cubes, dimensions and queries).

In the meantime, there is also a step by step tutorial available where you can check out the technical differences in more detail: https://developers.sap.com/tutorials/abap-environment-analytics.html

There will be a TechEd workshop DEV260 in November covering the topic!