Remote Conversions from BW 7.3/7.4 to SAP BW/4HANA are a new tool in the toolbox adding to the In-Place conversion option.

With an In-place conversion the customer first needs to upgrade its BW system to BW 7.5 compatibility mode. For a client that is currently on BW 7.4 this requirement will add a step to navigate on their route from earlier versions of BW to SAP BW/4HANA For many customers, the Remote Conversion offers a way to avoid the initial upgrade to BW 7.5.  Remote conversions can originate out of BW systems from BW7.3 and up. In addition, the sender system does not need to be on a Hana data base while an in place conversion requires to have a Hana DB as a starting point.

In a Shell conversion only the meta data is migrated from the old BW sender system to the new SAP BW/4HANA receiver system. All Info Providers, Data flows, Process chains etc. are migrated but the data is not migrated over to the receiver system.

In a Shell Conversion only the structures are migrated, and the data will be loaded from SAP S/4HANA/ECC

In a  Classic Remote Conversion both the Meta data and the data are migrated from a legacy BW sender system to the new SAP BW/4HANA system.

This conversion is the more complicated than the Shell Conversion, but it will create an exact copy of the clients existing BW system under the new SAP BW/4HANA landscape.

This is a good approach if SAP S/4HANA / ECC does not have all the data the client needs, and the reporting consumers are expecting the full historical data volume.

In a  Remote Conversion  both data and structures are migrated

The Carve Out is a variation of both Remote and Shell Conversions. In a carve out the client will choose data flows to be converted. Only flows that you want to continue to use will be converted.

During the carve out the conversion algorithm will check on the inter dependencies of the chosen structures with the rest of the system. The conversion will fail if any needed dependency is missing. Once carved out objects cannot be re-integrated into the conversion. Therefore, a carve out option only applies in cases in which the client is sure that the carved-out structures are not needed anywhere else.

Early preparation should start well ahead of the actual migration. The Prep is an optional exercise and can be done by the client. This exercise will cut down on Project Timeline and staffing resource costs during the migration.

Note 1431315 and the instruction in transaction “RSREQREDUCE should be carefully studied and implemented well in advance. No Info-provider can have more than 1000 request.  Request reduction can have hidden issues that need time for resolutions. Lessons Learned (old 3X data-flows had hidden not fully promoted request and inconsistent tables which stopped reduction.)

Are not supported in SAP BW/4HANA and would need to be redesigned before conversion.

The conversion will not allow any 3x data-flow objects to be present in the system.

All Objects Marked in red need to be addressed.

Since this is a first very early run not all the code changes need to be made at this point. Its good practice to get familiar with the issues and to address anything that can be done without causing issues in the old environment. Some code changes will have to wait for the actual Migration Prep. 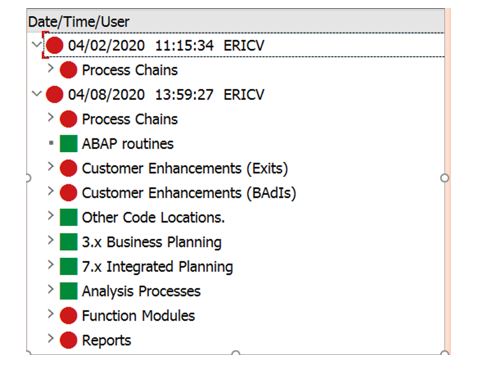 Typical Code changes ( some must happen after migration)

Questions to be asked during Analysis.

SAP is currently not providing a fully operational conversion tool for APD’s. The existing tool works only for the simplest APD’s.  Most APD’s have to be rebuild.

APD’s can be rebuild before the migration. The functionality needs to be built into End- or Expert- routines using transformations. In addition, DTP’s with filter functions can be used. The workflow being used in the APD will need to be rebuild using a Process chain. Lessons Learned (do not trust the APD conversion tool. Start early to build out APD replacements)

All data sources will need to be ODP compliant.

Almost all Data sources commonly used in a BW implementations are whitelisted for use in ODP as well.

SAP Note 2232584 contains the updated list of data sources that are released for ODP.

Checking the ODP whitelist against the list of utilized data sources is an important first step and can start early.

If the transactional system remains to be SAP ECC its is important to check that your release supports ODP data sources. For SAP BW/4HANA the SAP ECC source system should have the following minimum release (picture source SAP)

Start to train the team early. Below a list of the most important SAP classes

In this option the actual conversion is only done once. 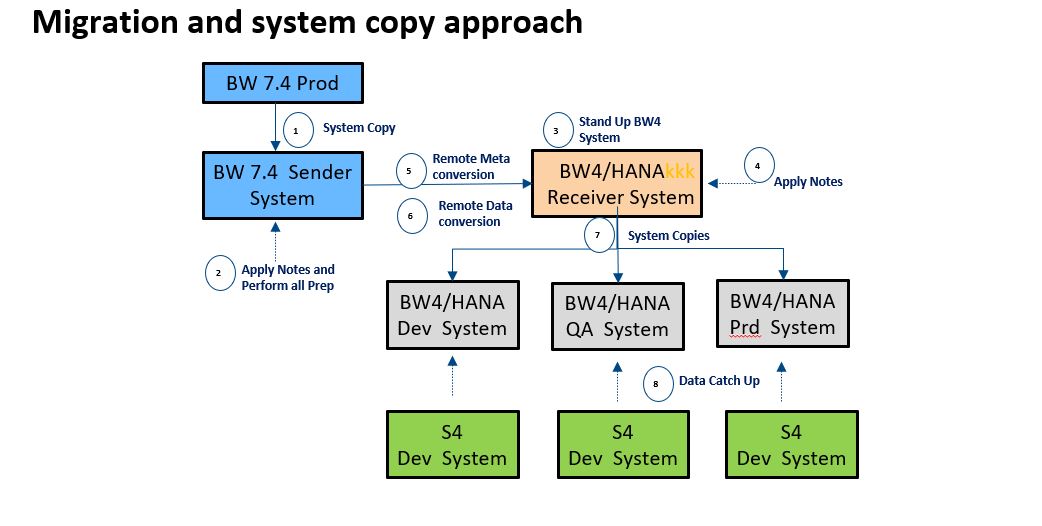 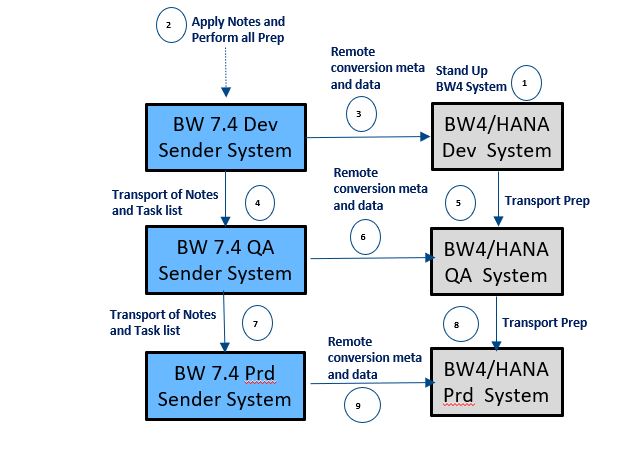 Prep at Beginning of Migration Project

Many Notes need to be applied in BW sender 7.X system and SAP BW/4HANA receiver system

In a first step read Note 2541557 which will allow you to download the note analyzer. Install the program in both sender and receiver systems. run the analyzer throughout the project. Running the downloaded program and using the xml file for remote conversion  will provide you with the list of notes that need to be installed in prep of the migration 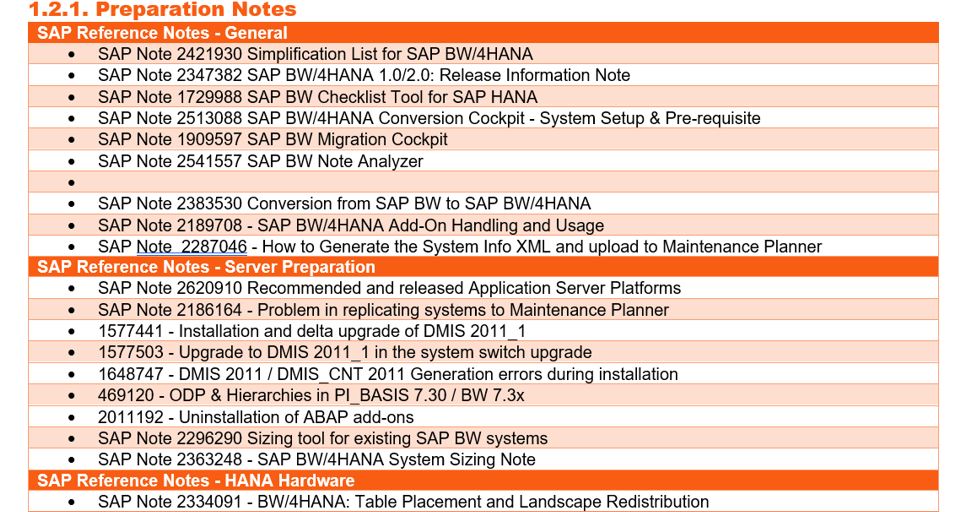 At this point you will find yourselves in a transport freeze if you choose the classic SAP Migration Approach ( Option 2) .If you choose Option 1 you will have to first make a system copy of your production BW system to create the migration Sender System. The existing BW Landscape will remain untouched when using Option 1 ( system copy approach).

From here on all additional Prep will be done either in the BW development 7.X system ( Option 2 ) or in the System Copy of the BW.7x Production System (Option 1)

2nd round of code resolution

To enable use of ODP data replication you must first implement the Support Packages or SAP Notes described in the following SAP Notes in your system:

Run program  RODPS_OS_EXPOSE  in the SAP source system to release all custom extractors to ODP. 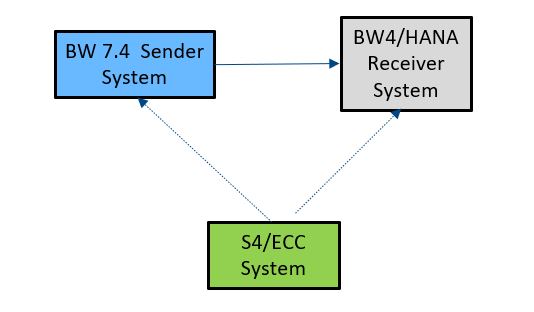 Last Steps for both conversion options

In Scope Collection phase several tasks need to be performed

The Task List has a manual confirmation step before data migration can start, This confirmation has to happen after the team has confirmed the successful import of the Migration transports into the receiver system. After this confirmation the Data Transfer Phase can start.

Remote Conversions of  legacy BW systems are a larger project but make sense if the client likes the existing BW solution and has many years of development invested. It is important to start early and Prep the system before the actual migration project starts. The migration tool has proven to be a stable and bug free solution. Throughout the project SAP needed to assist many times but in almost all cases the issues were related to missing information in the Implementation guide.

Thanks for sharing your experience and insights Andre!

I'd like to add another option as shown in my latest book (see https://bit.ly/3gu8X1k): We use our external tool to first extract a copy of your BW metadata, convert and remodel it offline, and then push it to your development, QA, and production systems. An added benefit is that we can keep various versions of your metadata as a backup, apply a consistent naming convention, or discuss any remodeling issues with your stakeholders before actually deploying it.