Basis consultants would follow a set of processes during the system preparation process, which includes data backups and many other tasks. Once these steps are completed, the basis consultant would begin the upgrade via the software upgrade manager (SUM).

The typical steps in the SUM (Figure 1) would be as follows.

Note: This error would typically come if there are any inactive objects under local objects of system users. If activating them is not possible due to any reason, I would recommend deleting them as they are anyway local objects and it can do no harm to the systems in either Quality or Production environments.

If the inactive objects are in transport requests, they must be activated, and the respective requests must be released.

Errors causing to repeat the above phase 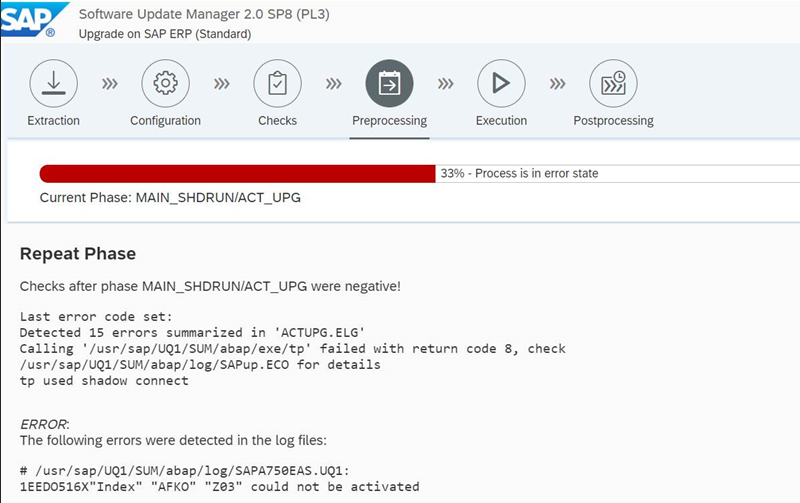 Note: Make sure to maintain a separate transport request for the corrections under the above steps, as the software component version for the corrections done until now would be lower, compared to the version that would be available after the system upgrade. If you miss this, there could be complications while importing the transport request to the systems that would be upgraded in quality and production environments.

Once the pre-implementation steps are completed, the BASIC consultant would continue to upgrade the system via the SUM, where the next step would be to do the adjustment of modified repository objects (Figure 6).

Note: A functional overview of the upgrade process could be found in the following blog, which has been posted by N Palanisami , which I found very interesting and important in grabbing the above said knowledge and experience from a functional perspective.

I hope the above experience gained through the system upgrades, would be helpful for anyone who is involved in a SAP upgrade. I know for a fact, it is not easy to do a proper SAP upgrade if you are not familiar with the above steps. And getting familiar with it is not an easy task as SAP technical upgrades are not carried out frequently, for the same system.

Keep me posted with any questions you have with regards to the above mentioned content, I will be adding more such experiences in near future.