Bad Joke: This chatbot was all too human

But then a colleague of mine wrote to say he didn’t get the joke. 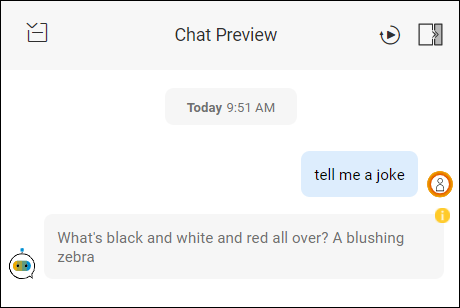 And then I realized there were 2 things wrong:

So I changed it.

I invite you to go to the tutorial (and learn about chatbots and earn a badge) and check out the new joke. I guarantee it will still make you groan, but at least it’s a joke.

P.S.: Feel free to add a comment to this blog to tell me what joke I should have used.

See all SAP Conversational AI tutorials (and earn some badges)

See all tutorials in the SAP Tutorial Navigator

Walks a horse into a bar. Asks the bartender: Why the long face?

The horse joke I still think is clever. What was even more clever is the way Shrek 2 made use of it: Donkey, who by some magical power turns into a horse, has a bad day and sullenly walks into a bar. The bartender then asks him, "Why the long face?"

I even laughed more about the cat: 'I hate mondays!' with a strong spanish accent ;-)).