2020 has been a year like no other. All of us have been affected in many ways and to different degrees and had to find solutions to deal with the pandemic. At the same time, this crisis has underlined the significance of co-innovation driven by open science, open data, and open source. Scientists readily sharing the genome of the virus right from the beginning jumpstarted world-wide research into the virus, the diagnostic testing, and the vaccines that have since been developed. Opensource enthusiasts from all over the world have teamed up to contribute to fighting the disease with applications for tracing contacts, speeding up test result notifications, and helping to find volunteering opportunities to support local communities. One of these applications is the German Corona-Warn-App that has been jointly developed by SAP SE and Deutsche Telekom.

This blog post miniseries is intended as a high-level summary of SAP’s open source engagement in 2020: 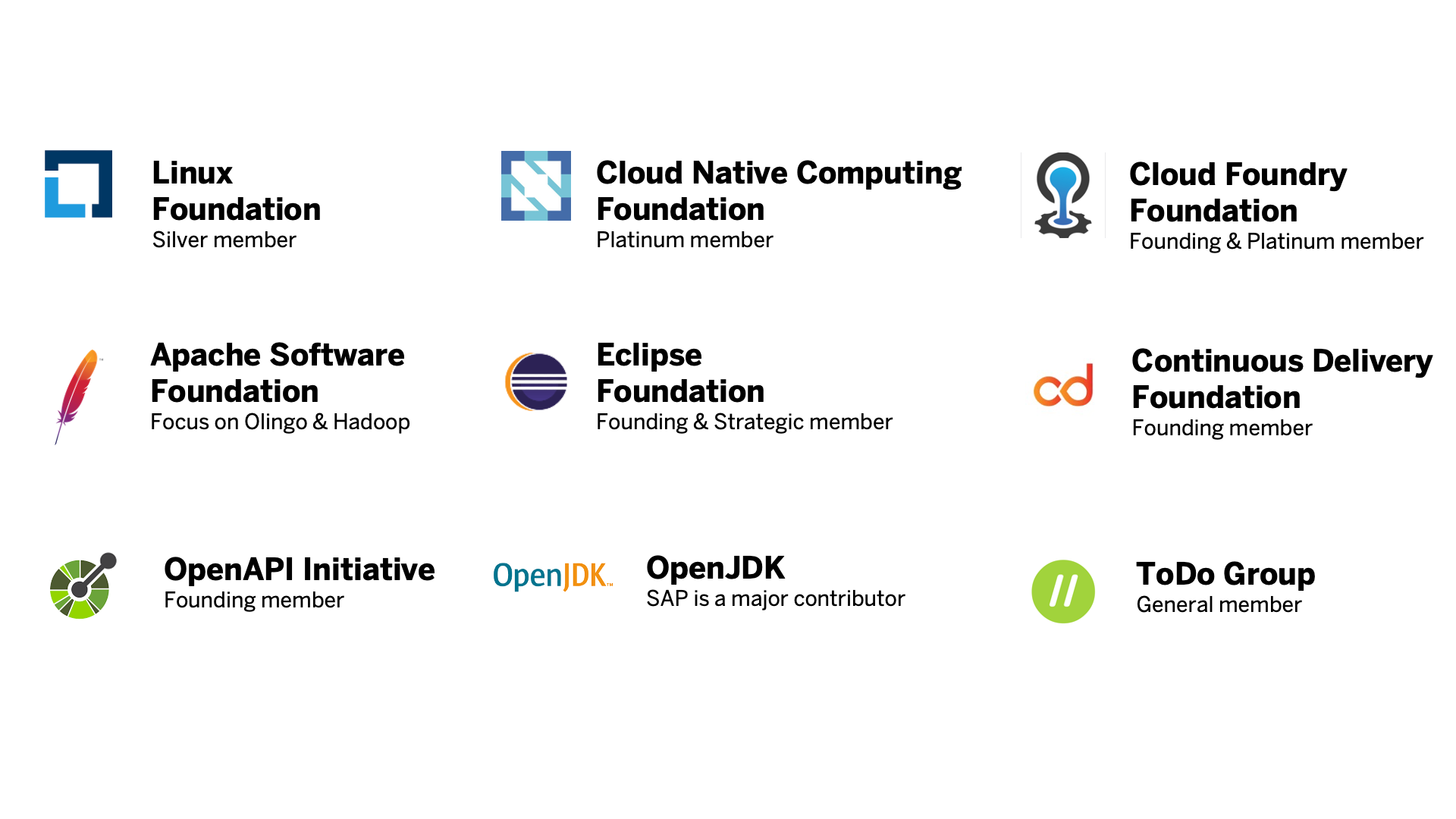 Some of the open source projects of these foundations that SAP contributes to will be highlighted in part two of our miniseries. Here are some examples of whom the SAP Open Source Program Office cooperated with in 2020:

SAP was a sponsor and an active contributor to Bitkom’s (Germany’s digital association) first open source survey and the resulting study “Open Source Monitor”, published in 2020 and underpinned by expert statements from the sponsors. We are looking forward to actively supporting the new study in 2021, which will again provide an overview of the status and changes of open source among German companies.

The TODO Group, part of the Linux Foundation, is a great platform to exchange best practices for enterprise open source management. In September 2020, the publication “Why Open Source Matters to Your Enterprise” was released. This report about the business pros and cons of using open source software was a joint effort of several members of the European Chapter of the TODO group, with active participation of SAP.

Moreover, in 2020, we improved and standardized the copyright and license management for SAP-driven projects using the REUSE tool of the Free Software Foundation Europe (FSFE).

We also simplified the process for third-party contributions to SAP-initiated open source projects by switching from our SAP-specific contributor license agreement (CLA) to the standard Developer Certificates of Origin (DCO), as established by the Linux Foundation.

In April 2020, SAP and Deutsche Telekom were contracted by the German Government to build the COVID-19 tracing app “Corona-Warn-App” for Germany. A vital component of the request was to build all components as open source software. In an unprecedented team effort, SAP and Deutsche Telekom built up a dedicated organization on GitHub that hosts the entire source code as well as related documentation and background material in a noticeably brief time. Several months, 25 million downloads, countless community interactions, and several releases later, the app is still being improved by the teams at SAP and Deutsche Telekom with the help of the open source community. So, if you are based in Germany and have not downloaded the app to your mobile yet, please install it now and help to break infection chains! For more background information, tune in to our podcast episode about the Corona-Warn-App.

Part two of this miniseries of blog posts will highlight some more of our open source projects and their 2020 achievements.